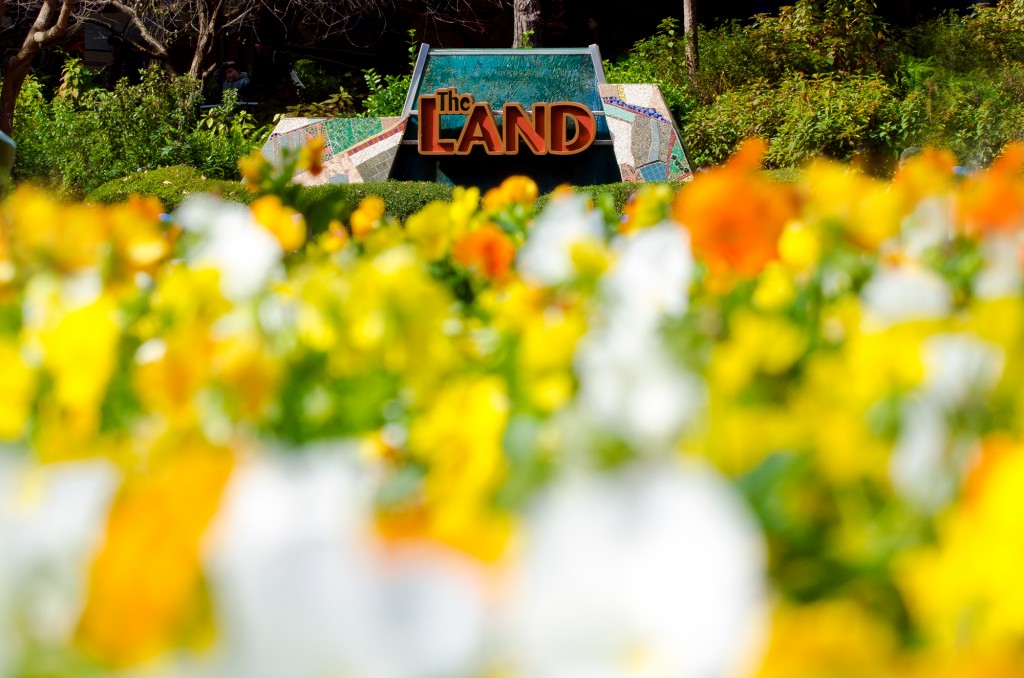 Our usual stops for breakfast at Epcot are the bakeries in France or Norway, or at Fountain View for some Starbucks and a quick snack. We’ve also done the character meals at Garden Grill (also in the Land pavilion) and Akershus, but those are really pricey. Sunshine Seasons fills the ‘niche’ of serving traditional breakfast foods in a quick and less expensive setting.

For breakfast, most of the ordering stations at Sunshine Seasons are closed. Worth noting that in addition to the couple that are open, the bakery is also open–as are the grab and go deli cases. So, if none of the entrees look good, just get a few desserts. (Cupcakes: the cornerstone of any nutritious Walt Disney World breakfast!)

It’s rare for us to rope drop Epcot, but on a recent redeye flight I went directly there after landing. Fatigue quickly set in, so I joined about 33% of the crowd that was racing to the Land pavilion. Of that crowd, less than 1% (literally just me) zagged to Sunshine Seasons instead of doing Soarin’ Around the World with a 0 minute wait. Shockingly, no one else had gotten up at the crack of dawn to have a mediocre counter service breakfast.

The bad news is that even though every table was empty for that early breakfast at Sunshine Seasons, it was still incredibly loud thanks to the stampede of guests from upstairs to Soarin. One of the biggest (and most valid) criticisms of Sunshine Seasons is that it’s always loud. Due to its location adjacent to Soarin’ Around the World and minimal sound dampening, Sunshine Seasons is pretty much always loud unless you go at the very end of the night.

I had been wanting to try the Cinnamon French Toast Bread Pudding for a while, as it sounds amazing. Delicious, it was not. My serving was a medium-sized, very firm square. I guess the consistency was about what you should expect if you mixed bread pudding with French toast, but it was not too appetizing.

Flavor-wise…there was not much flavor. Part of me is hopeful that I got unlucky with a chunk of this that had been sitting around for a while, and you’d have better luck if you went around 10 a.m. when Sunshine Seasons gets busier. I’m not willing to find out, though, as this was pretty bad. On the plus(?) side, I was given a huge helping of bacon. On the down side, this is normal Walt Disney World bacon, which is a thinly-sliced shoe leather. 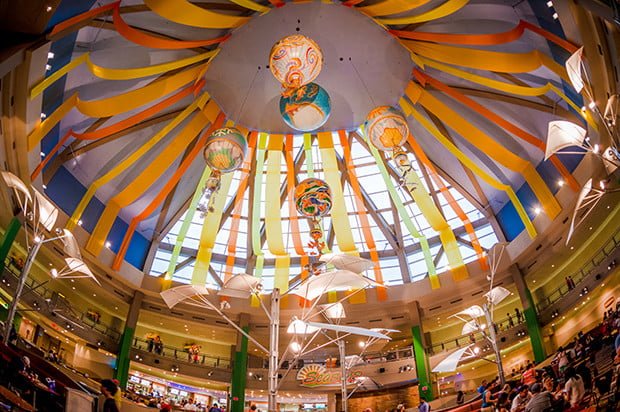 On a more recent visit to Walt Disney World, we were at Sunshine Seasons mid-morning as a stop on the unDISCOVERed Future World tour (review of that tour to come). We had a 20 minute break for snacks, so we decided to grab breakfast.

In this case, the atmosphere was still chaotic, but it was a result of guests pouring out of Soarin’ and immediately into Sunshine Seasons. The race to rope drop Soarin’ was long over, and the “direct chaos” had moved over to Sunshine Seasons. Here’s what we had on that visit… 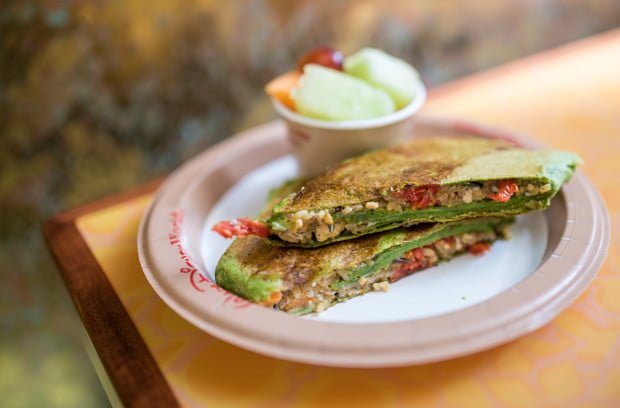 We both agreed that this was an odd mix of flavors, albeit mostly mild ones, and there wasn’t enough filling to balance out the wrap. In deference to the vegans out there, this would not necessarily have been better with meat. If anything, the lack of fake stuff or shoddy ingredients made it refreshing among Walt Disney World breakfasts. It just was not as filling as it should’ve been. 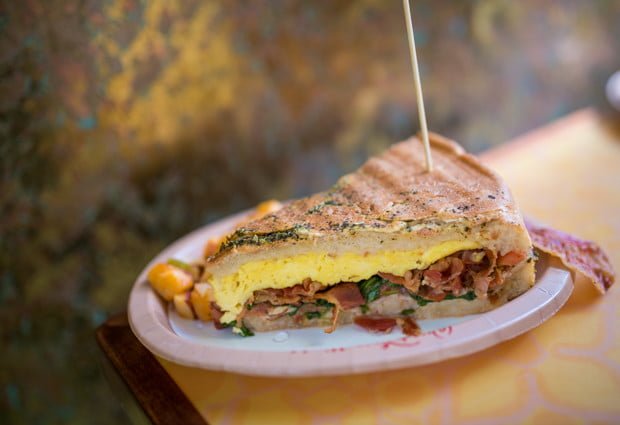 I ordered the Breakfast Panini. This consists of “Pork, Bacon, Scrambled Eggs, Arugula, Tomato and Chorizo-Pepper Jack Mornay Sauce served with choice of side.”

This was surprisingly good. Don’t get me wrong–that classic Walt Disney World thinly-sliced, shoe-leather bacon and powdered eggs are the main components, but the other ingredients elevated the quality of the dish. It was fairly flavorful and even slightly refreshing thanks to the arugula, tomato, and slight kick of the sauce. I never expected to call a dish with Disney eggs and bacon one of my favorite breakfast items at Walt Disney World (a low bar, to be sure), but here we are.

Overall, we’d still only recommend doing breakfast at Sunshine Seasons only out of necessity. I know we “joke” a lot about having cupcakes or other desserts for breakfast since you’re on vacation, but…seriously, have cupcakes or other dessert for breakfast instead. While I liked my breakfast panini, that’s in comparison to other counter service breakfast options at Walt Disney World, most of which are awful. I’d still take dessert from Kringla Bakeri og Kafe or Les Halles Boulangerie-Patisserie. While those snacks certainly aren’t going to give you the energy you need to power through a day in Epcot, they should at least provide delicious filler to coast into an early lunch.

Do you agree or disagree with our take on breakfast at Sunshine Seasons? Any other breakfast options you like at Epcot? Any questions we can help you answer? Hearing feedback about your experiences is both interesting to us and helpful to other readers, so please share your thoughts below in the comments!

16 Responses to “Breakfast at Sunshine Seasons”