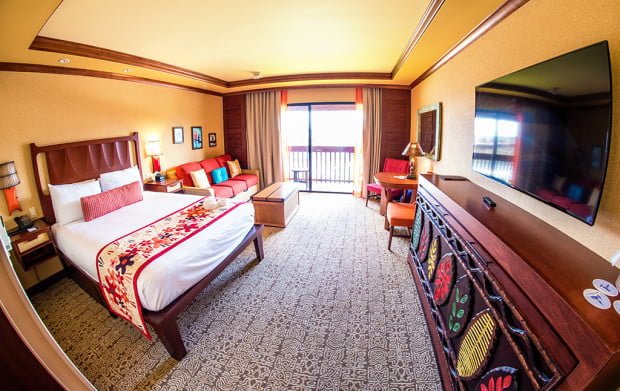 Disney’s Polynesian Villas & Bungalows is a Disney Vacation Club resort at Walt Disney World with a laid back South Pacific theme near Magic Kingdom. This review features photos and thoughts on the Deluxe Studio rooms in the Polynesian Villas; we’ve previously reviewed the Bora Bora Bungalows.

Here’s the good news: the guest rooms in the Poly’s Tokelau, Moorea, and Pago Pago Longhouses have been gutted and remodeled into these Deluxe Studio Villas, and in the process, have been nicely upgraded. In fact, the Deluxe Studio room at the Polynesian Villas are my new #1 Disney Vacation Club room at Walt Disney World.

We’ve now stayed at the Polynesian Villas a couple of times, and this is one of our preferred Disney Vacation Club resorts at Walt Disney World. If you’re doing a Magic Kingdom heavy trip, it’s one of your absolute best hotel options.

While the regular Polynesian Village Resort is expensive when booked directly from Walt Disney World, you can book it for less than half the normal cost by renting DVC points. Read our Tips for Renting Disney Vacation Club Points post if you’re thinking of doing a stay here.

What pushed this room to #1 on my Disney Vacation Club list? Let’s take a look… 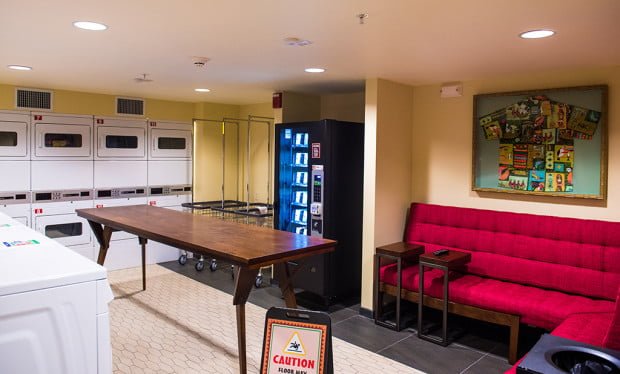 Of course we start with the most exciting aspect of any vacation: laundry!!! Disney Vacation Club members have access to these free machines via their MagicBands. There are no washing machines in the Deluxe Studios.

Moving on, these units are located in Pago Pago, Moorea, and Tokelau, which are some of better buildings at Polynesian Village Resort, many of which offer Magic Kingdom views. The previous hotel rooms were repurposed, but the buildings were not gutted. 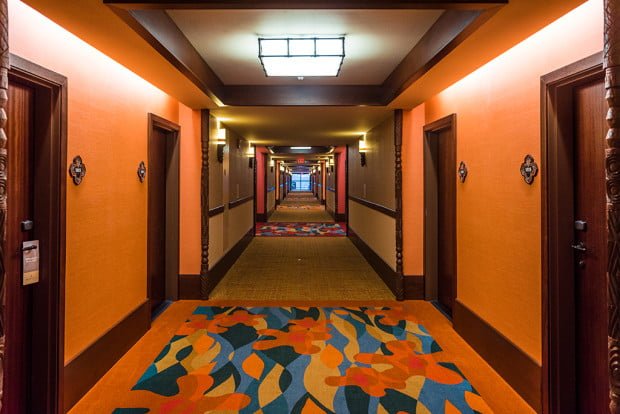 Here’s a look at the hallway as an example. It has been remodeled, but this is virtually the same view, with the same number of doors, you would have seen pre-Disney Vacation Club.

You’ll also notice the colorful carpet here, which is a precursor of what’s to come in the rooms. Our party was pretty split on the overall design, with half finding the color scheme light and fun, and the other half finding it clashing and lacking restraint. You can judge for yourself in the room… 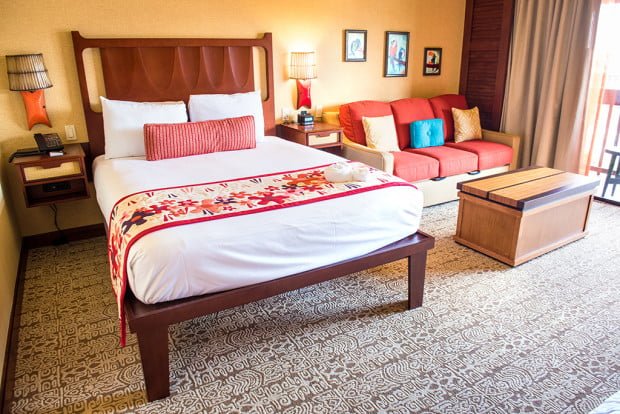 Here’s a view of the queen-sized bed and queen-sized sofa sleeper. Personally, I love the look of this. From the details in the high-quality feeling carpet to the light fixtures to the coffee table to the art on the wall, I really like it all. One thing worth noting that someone in our party pointed out was that there’s ample room under the bed for luggage storage–I think this is a first in Disney Vacation Club rooms.

In retrospect, I think the basis for others in our party thinking the room was clashing was the pillows on the sofa. I think it’s fun, but if you don’t like that look…I guess throw the pillows behind the curtain and be done with it? 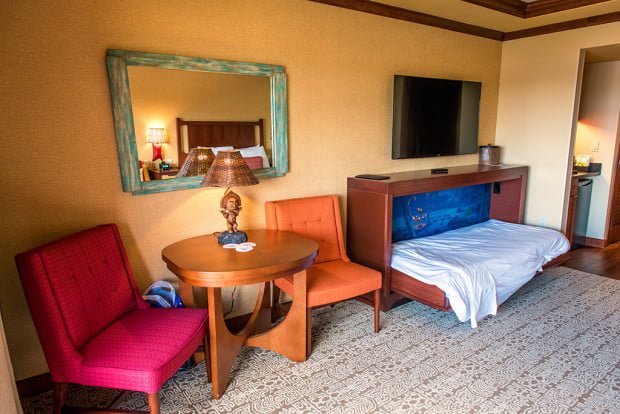 Here’s the other side of the room, with a table and chairs and the pull-down Murphy bed below the television. This means that the Polynesian Villas can sleep 5 people. You’ll also notice that there’s no dresser here, and might be worried that they simply didn’t have room for one.

They didn’t, but it’s not because Disney tried to squeeze as many rooms into each building as possible, making them cramped. These are the exact same size as the Polynesian hotel rooms, which were the largest Deluxe Resorts. At 447-465 sq. ft., these are the largest Disney Vacation Club rooms at Walt Disney World. The next closest is Old Key West at 390 sq. ft. in the Deluxe Studios. That’s a huge difference. 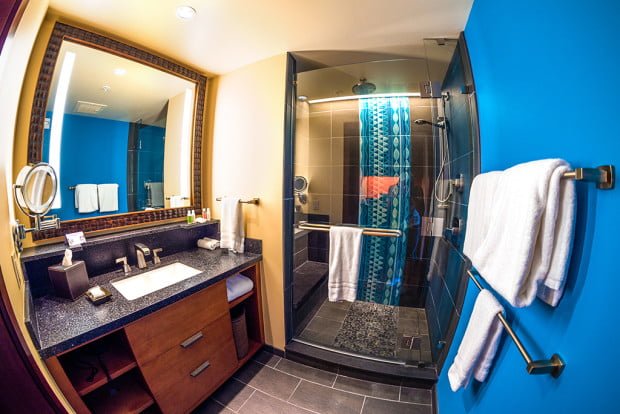 So where did that extra space go if not to a dresser? THE BATHROOMS! Magnificent facilities! If you follow this site, you know I’m not feigning enthusiasm here. Walt Disney World bathrooms are largely awful and stuck in the past. Not the case here. Upon surveying my bathroom kingdom here, I felt like George Costanza when he starts working at Play Now and gets the handicapped bathroom.

Pictured above is the shower room, which contains a beautiful walk-in (YES!) shower, recessed basin sink, and in-mirror lighting. This is room 1 of 2 in terms of bathrooms… 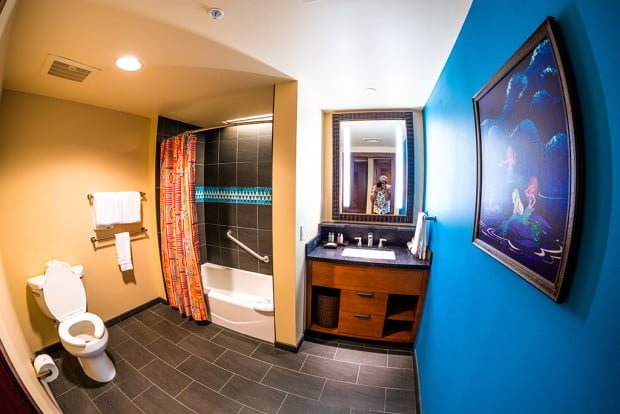 …and room 2 of 2, the full bath, with bathtub and shower. Wow! Zanadu.

This is another nice looking bathroom with high quality finishing. Note the awesome mermaid wall art, too. 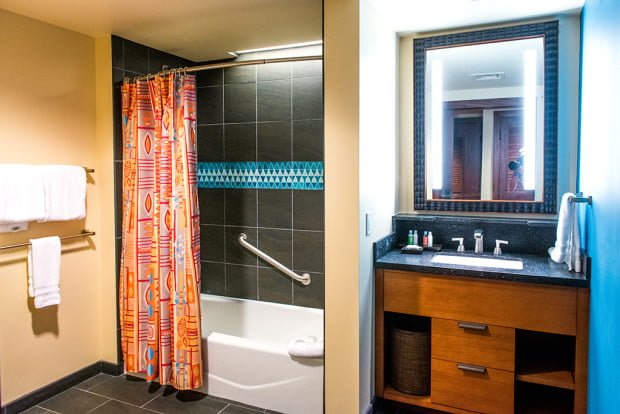 A closer look at the bathtub and sink. This all seemed really nice and well done, while still retaining the light, tropical feel.

(You must think I spend my entire vacation in the bathroom with how excited I’m getting over these.) 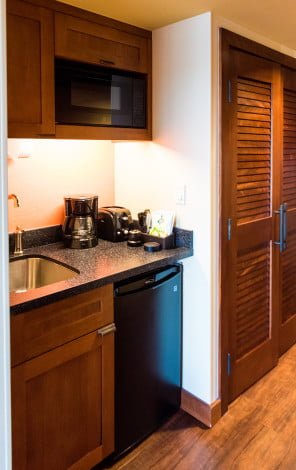 Although there is no dresser, there’s a closet for clothing, plus a mini-kitchen with sink, fridge, toaster, microwave, and coffee maker. 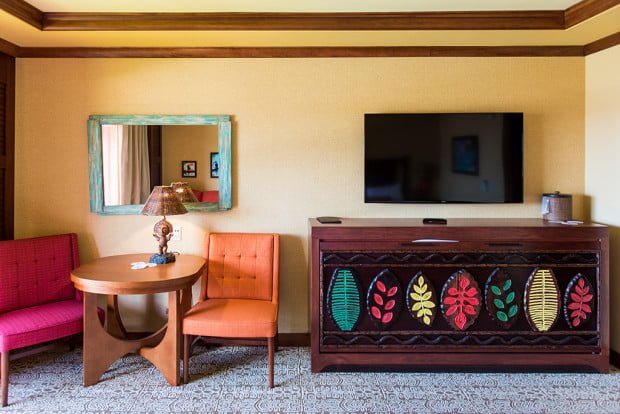 I have been gushing over these rooms, but I really love them. To me, they have a classy, almost Mid-Century Modern style in the furniture, high-quality finishings, and just the right amount of color and detail to fit the South Pacific theme. These rooms seem like they were done the right way, rather than the cheap way. 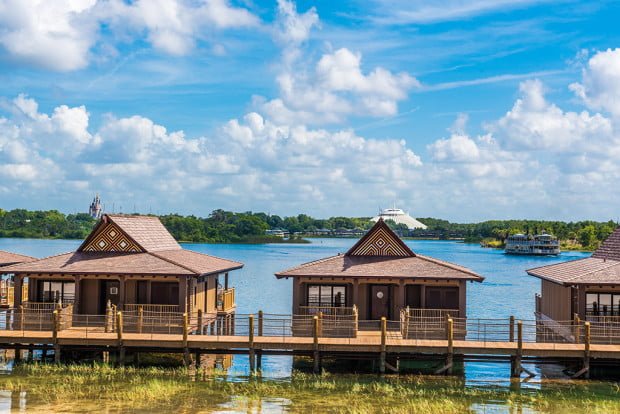 Our room was located on the 2nd floor, and this was our view of the Magic Kingdom. Slightly obscured by the Bora Bora Bungalows, but not as bad as I expected. Go for the 3rd floor for an even better view.

Ah, those bungalows. The cost to rent one of those bungalows tonight would be 135 points. By contrast, I could get 2 Deluxe Studio rooms for a total of 42 points–50 if I wanted the Magic Kingdom view. My 2 Deluxe Studios would sleep 10 people, versus only 8 in the Bora Bora Bungalow. Unless I were having some family reunion or grand gathering, my choice here is a no-brainer. 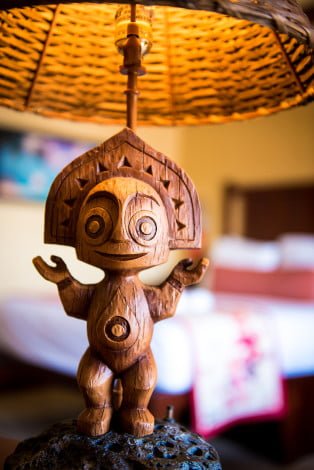 Overall, I think there’s a lot to love about the Deluxe Studios at Disney’s Polynesian Villas & Bungalows. They are easily my new favorite Disney Vacation Club (studio) rooms at Walt Disney World. The rooms are not only the largest of the studios, but the space is utilized really well. I applaud the decision to have a walk-in shower, and I think larger families will appreciate that.

For me, the style here hits the nail on the head, balancing Disney theming with high-end style. I can imagine an affluent family taking a vacation to Hawaii in the 1960s and coming back and decorating their cottage like this to evoke the feel of what they experienced (save for the LCD television).

What do you think of the Deluxe Studios in Disney’s Polynesian Villas & Bungalows? Do you like the style, or think they are over the top? Do you agree or disagree with our advice? Any questions we can help you answer? Hearing your feedback–even when you disagree with us–is both interesting to us and helpful to other readers, so please share your thoughts below in the comments!