Raglan Road is a table service Irish pub at Disney Springs in Walt Disney World. While you can stop into the bar just for drinks, the table service dining and quality Irish entertainment is the real draw here. Raglan Road has an authentic Irish menu, which (per the Raglan Road website) is a real rarity for Irish restaurants in the United States.

We have little experience with authentic Irish pubs, but Raglan Road certainly feels authentic. Between the buildings that were actually brought over from Ireland and the entertainment consisting of Irish acts, it feels authentic. The Irish decor is comprised of dark woods, brass fixtures, nice tiling, and brickwork, rather than just a bunch of green shamrocks liberally thrown around, giving further credibility to the pub actually being Irish, not just posing as an Irish pub. Either it actually is, or they’ve sure done an incredible job faking it.

We visited at night while a band of Irish musicians were performing, and the location had a loud, pub atmosphere. We didn’t see any restrictions on children, but there weren’t any around. (We also sat down for dinner at 10 p.m., so that could have been part of it.) Guests won’t necessarily feel out of place with kids at Raglan Road, but we probably wouldn’t take them there at night. It’s loud, and about as close as anywhere at Walt Disney World gets to being raucous.

During its “dark years” before expanding and being rebranded as Disney Springs, there wasn’t much that drew us to this area–except Raglan Road. It has proved a reliable draw offering an experience that is wonderful and (mostly) unique. While it is owned by a third party, (many restaurants in the parks are, too), it doesn’t have any other locations (there used to be a location in Kansas City, but it closed). I spent way too much time researching this, and found a bit of information about the company. This may not matter to anyone else, but we far prefer dining at restaurants in Walt Disney World that we can’t experience anywhere else. It makes them “feel” woven into the Disney experience, even if their ownership is different.

As for the wonderful experience you’ll have at Raglan Road, let’s take a look… 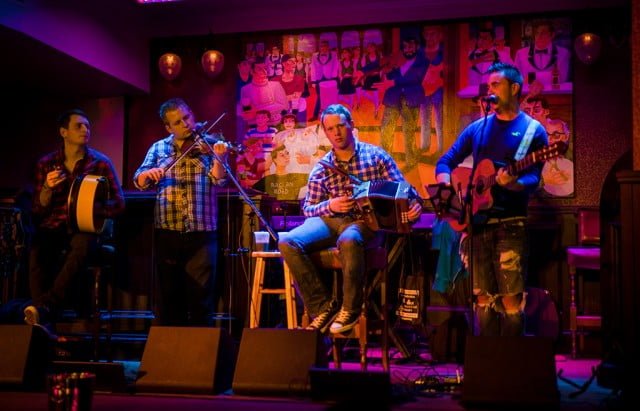 Although we probably won’t be regular visitors to Raglan Road until phases of Disney Springs start opening, we absolutely would walk over here if we find ourselves staying at Saratoga Springs Resort when park hours are short.

The house band was excellent, giving Irish twists to contemporary music, and performing medleys of Irish songs. We could have sat in Raglan Road for hours just enjoying some beer (of which there are numerous options on tap). It’s a great place to eat and drink with a really fun atmosphere. 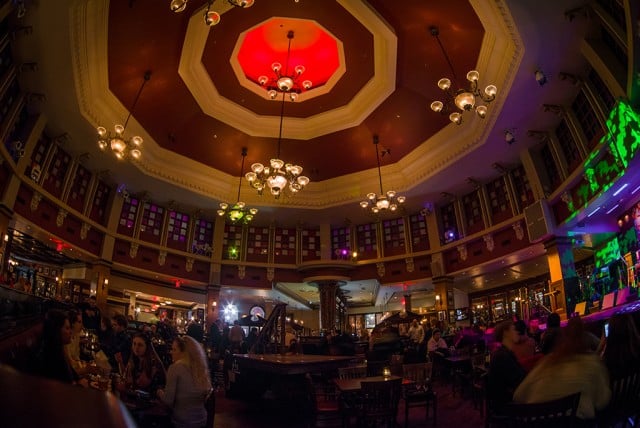 While the atmosphere is great, the food is the real star of Raglan Road. Here’s a look at what we had… 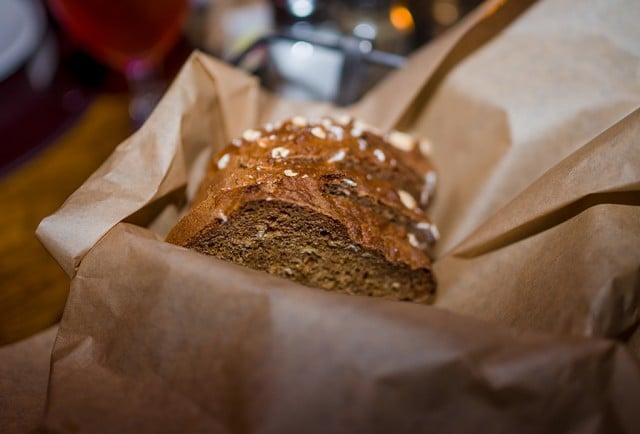 We started with bread. It was decent, certainly not a highlight of the meal. 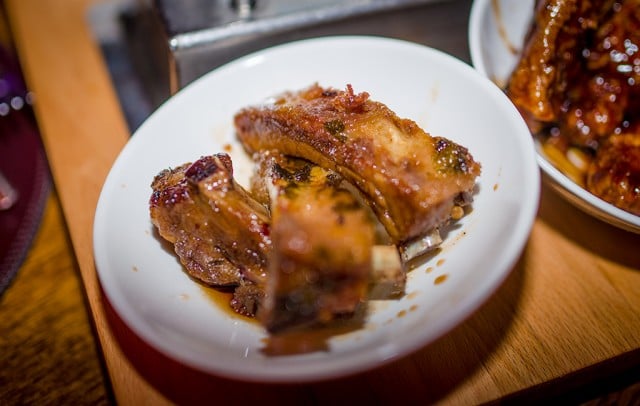 Next up was the the Appetizer D’Lirrah. I didn’t get a picture of the entire spread, but it’s four of Raglan Road’s popular appetizers. Above is the “Heaven on Earth,” which is baby back ribs tossed in a Guinness glaze. These were tender, and amazing. Imagine combining delicious ribs with delicious beer–if your brain doesn’t explode at the prospect of so much awesomeness, you’ll have an idea of how these taste. 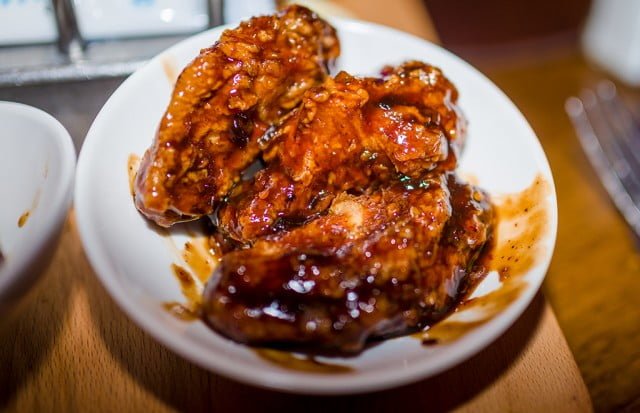 These are the “Nom Nom Wings,” which are sweet and spicy wings tossed in a honey, chili flake, soy & ginger sauce. The breading and sauce here gave a nice flavor to the wings, which were mild. 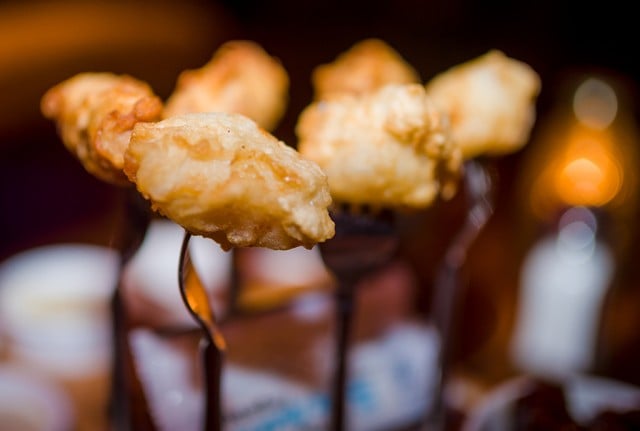 The “Scallop Forest” probably gets its name from being scallops on forks. These were thickly breaded, but the scallops inside were also large, tender, and flavorful. The golden batter had a nice, sweet taste, too. We unanimously agreed that these and the ribs were the highlights of the appetizer. 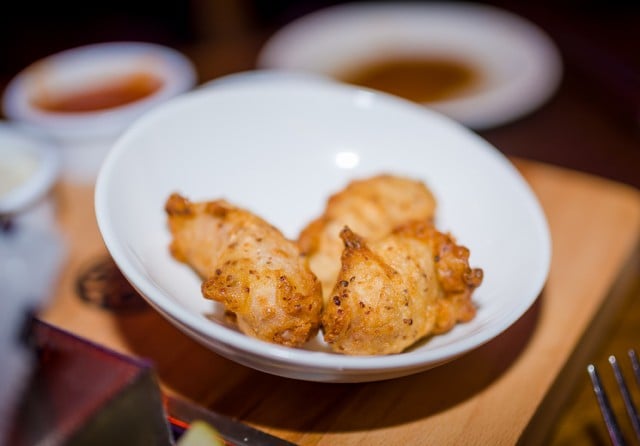 The “Dalkey Duo Sausages” were good, but were very rich. The combination of batter and the rich sausage flavor was a bit much here. One sausage was good, but two was a bit too many. 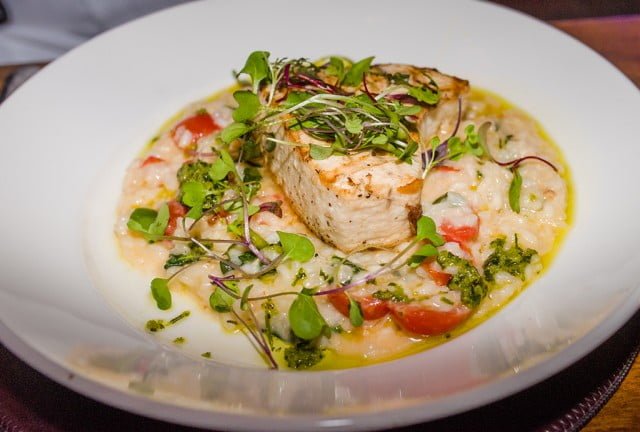 For an entree, our friend who was with us ordered the “Swordfish Steak.” He found it to be tender, and well cooked. Neither of us had a chance to try it, but it looked great. 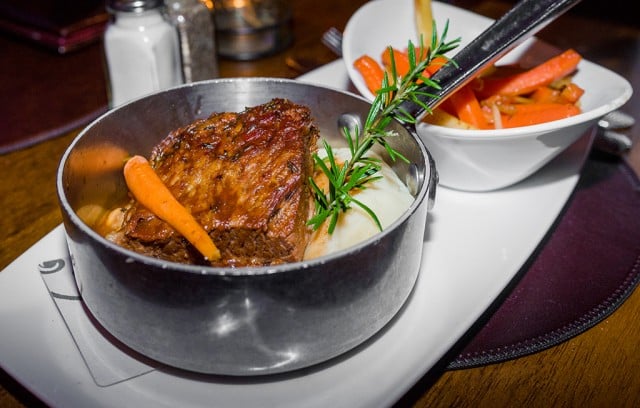 Sarah ordered the “Braised Be. Beef,” which was braised beef with horseradish mashed potatoes, roasted carrots, and parsnips. She really liked it, and the portion was absolutely huge. I tried some of this, and it was incredibly tender and very flavorful. It reminded me of the pot roasts my mom used to cook all day in the Crock-Pot. This is a dish that could definitely be split between two lighter eaters. 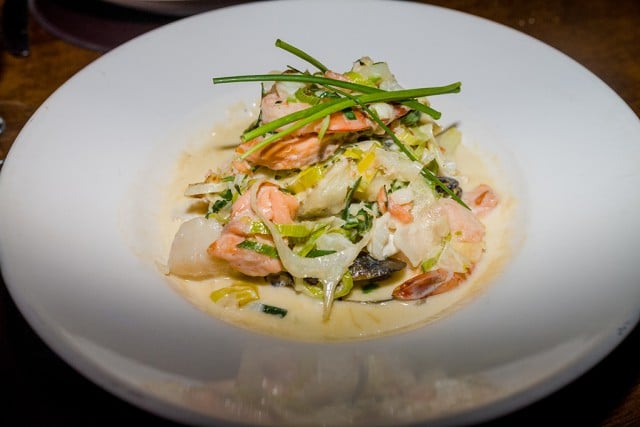 I had the “It’s Not Bleedin’ Chowder!” based on the recommendation of a few people from Twitter. I was initially apprehensive that it actually was chowder, and I was no mood for soup masquerading as an entree, especially one that cost over $25. Fortunately, this was no soup. It was essentially seafood in a white wine cream broth. The seafood was plentiful (I’m not sure of everything in there, but I’m pretty sure there was salmon, cod, prawn, shrimp, and mussels), and all perfectly cooked with the slight exception of the shrimp. The white wine cream gave the entree a nice, rich flavor, and the vegetables balanced it out and made it another incredibly filling dish. I couldn’t eat it all, but that’s not for lack of effort or enjoyment. They’re right, it’s definitely not chowder. 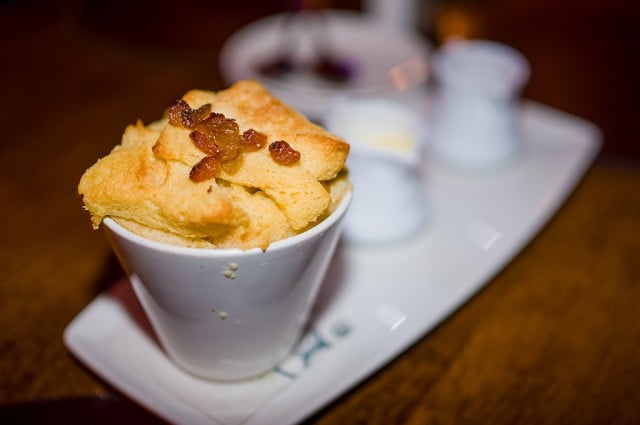 Over half the people who responded to our recommendations request on Twitter recommended “Ger’s Bread & Butter Pudding.” The fact that our server asked if this is what we wanted before even giving us a dessert menu suggests that this is their most popular dessert. And for good reason. 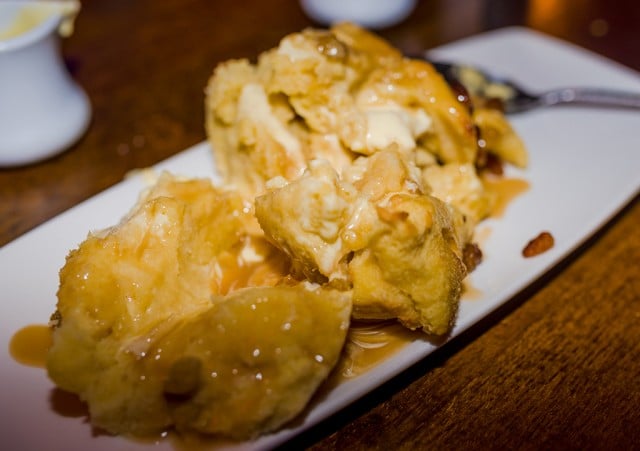 It was served with a caramel sauce and a cream sauce. Our server recommended spreading out the bread pudding on a plate and mixing all of the sauces onto it. This was an excellent suggestion, and it ended up tasting like a heavy, buttery sponge of sweet deliciousness. Normally, I couldn’t eat much of something this sweet, but it was so good that I just couldn’t stop. This rates as one of the best desserts at Walt Disney World, and is highly recommended. Two people can probably share it.