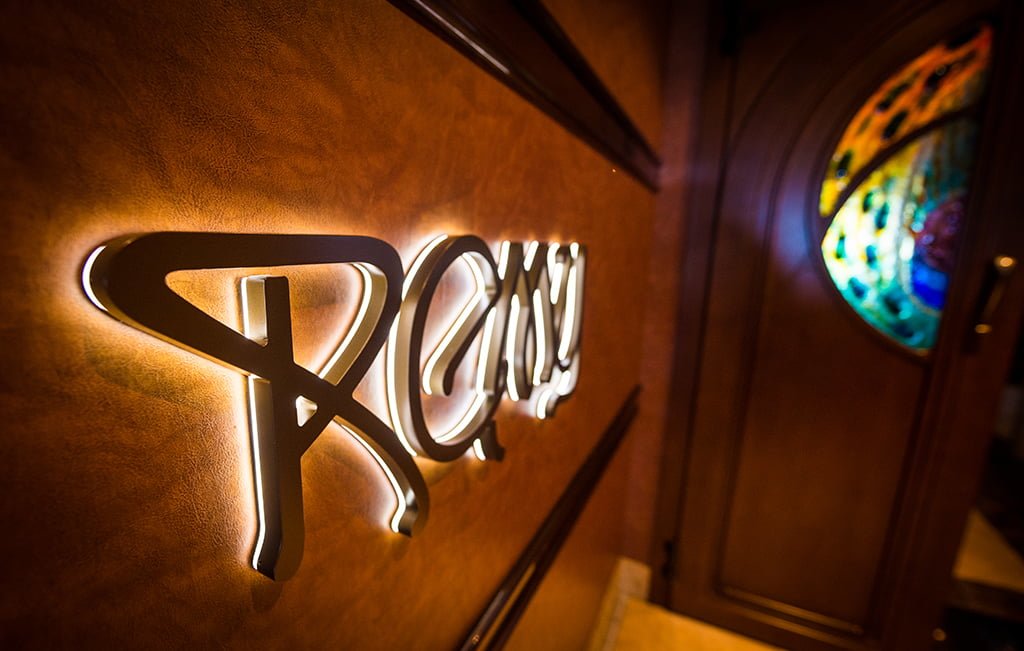 Remy is a fine dining restaurant aboard the Dream and Fantasy Disney Cruise Line ships, available to book as a premium experience. In this review, we’ll share food photos, thoughts on our experience, whether Remy is worth the money, and how it compares to other Disney restaurants.

As noted, Remy costs extra–even more than Palo–which is a departure from the standard rotational dining that’s included in the cost of Disney Cruise Line bookings. Dinner at Remy offers guests the choice of two different set menus, one crafted by Chef Scott Hunnel from Victoria & Alberts at Walt Disney World and the other by Arnauld Lallement of the celebrated restaurant at l’Assiette Champenoise hotel, which has earned 3 Michelin stars, located just outside Reims, France.

In terms of Disney restaurants, Victoria & Albert’s is an apt comparison for Remy, beyond just the chef behind the respective menus. As with that Walt Disney World restaurant, Remy is an adults-only experience with a strictly-enforced dress code and a haute cuisine multi-course meal. It’s a gourmet meal and luxury dining experience through and through, and doesn’t really compare to any other Disney restaurant, anywhere–even Palo.

Despite having sailed on these ships previously, you might notice that a Remy review has been conspicuously absent until this point. This is because I’ve previously resisted the temptation someone else in my party (I won’t name names) has to dine here, citing the high price tag.

Previously, dinner at Remy was a $95 surcharge, which is now up to $125 per person. This is expensive, but you also have to factor in the value of the dinner you’re forgoing, which is built into the cost of the cruise. Obviously, there’s no sum certain to that, but we’d peg it at around $75/person given the quality of the rotational dining. 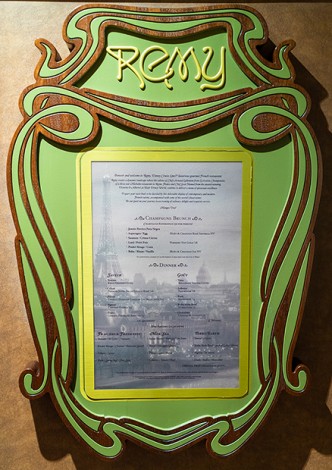 As a surprise “for” me, Sarah booked Remy for our recent sailing aboard the Disney Fantasy. I was still reticent and said we could decide later, and then the price increase happened. Given that we were already locked into the old “value” (ha!) pricing by virtue of our booking date, my hand was pretty much forced. I’d have to eat an exceptional meal…what a tough life.

As Remy’s dinner menu changes with regularity, I’m not sure how useful an item-by-item appraisal of our meal would be. Rather, I’m going to share photos of the food to give you an idea as to what to expect from each course, followed by some commentary… 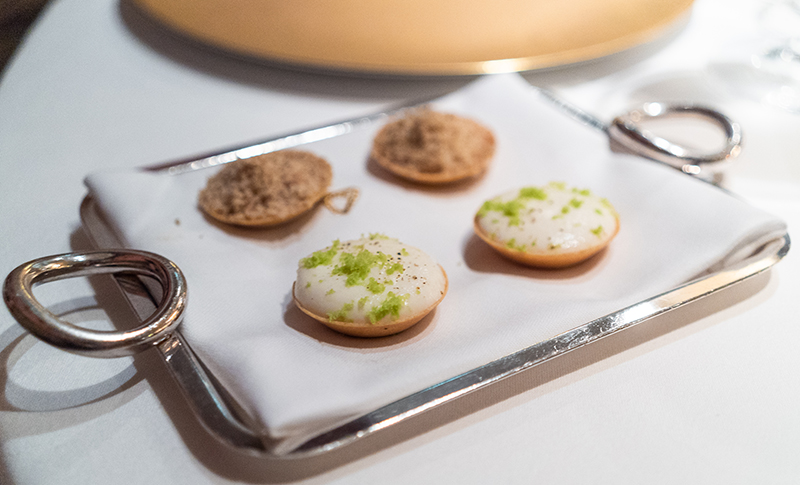 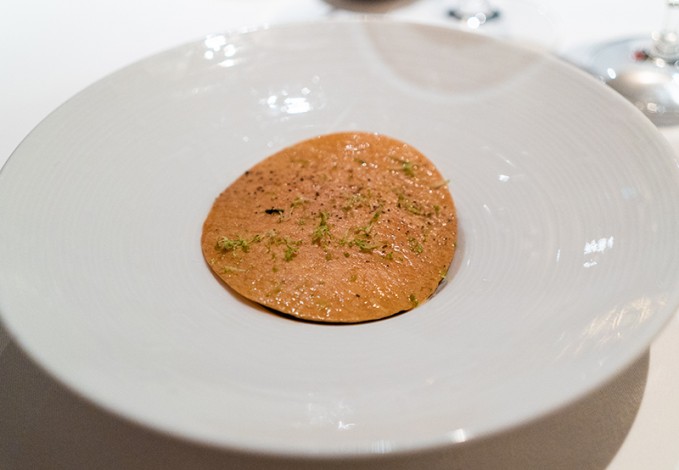 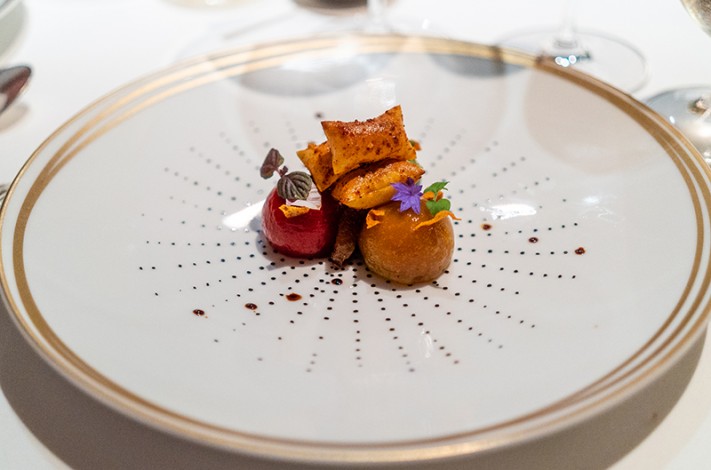 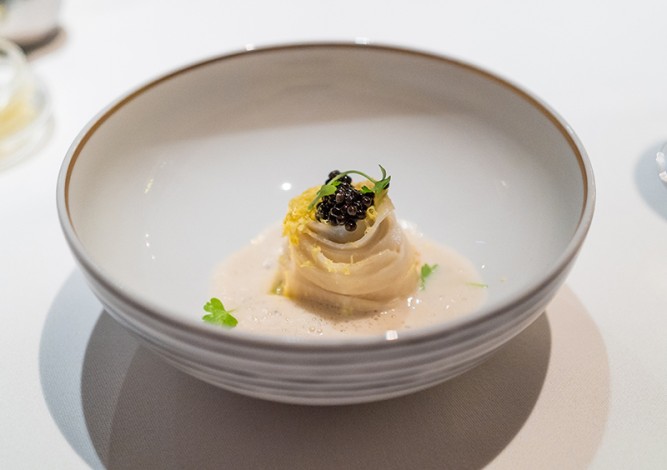 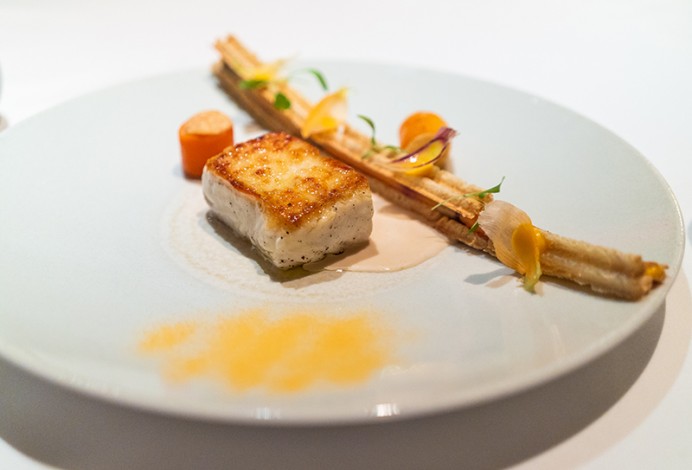 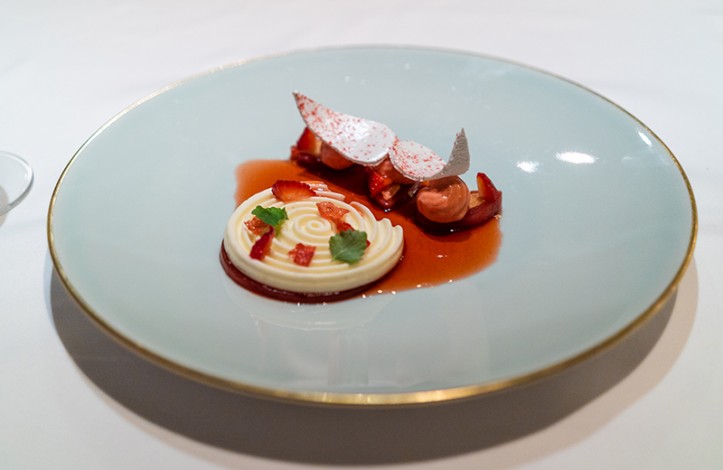 First, my half-hearted apologies for the lack of descriptions, no interior photos, and poor-quality food photos. I know it’s heresy, but a ‘bloggable experience’ wasn’t our priority for this meal, as this meal was most for a mostly-foreign concept to us called “personal enjoyment” rather than blog coverage.

No descriptions is also partially a cop out, as I can’t really do any of these items justice. The words that keep coming to mind are “symphony of flavors.” While that’s apt for literally all of these dishes, it’s also a bit hollow. 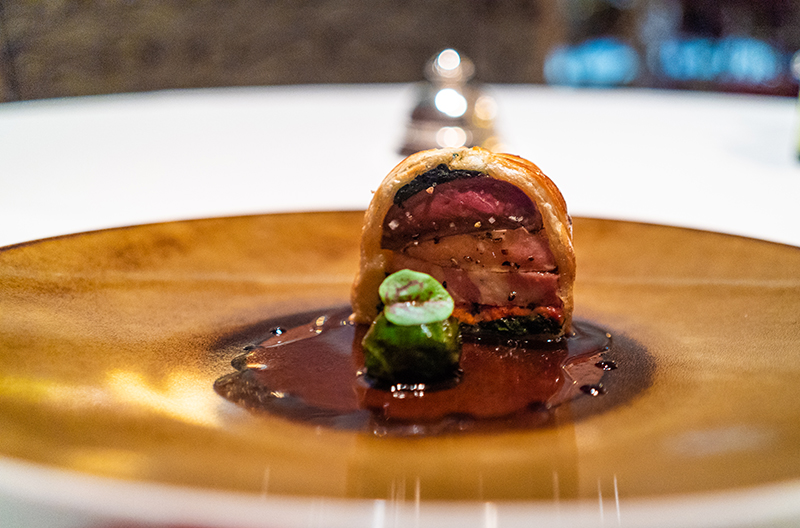 The problem, in a manner of speaking, is that the dishes at Remy, much like those at Victoria & Albert’s, are in a class of their own. They’re totally approachable and a crowd-pleasing fusion of flavors, but they’re also unlike anything you eat with regularity (unless, I suppose, you’re deep in the world of haute cuisine), so there’s not an obvious baseline or analog.

A restaurant like Palo is easier to review, because a smorgasbord of dishes you’d order at a ‘normal’ restaurant, just more masterfully prepared and with high caliber ingredients. Remy is more inventive and unprecedented, and its robust and rich flavor profiles often defy words. At least, that’s the case for me. More talented, professional food critics would no doubt have an easier go of it. 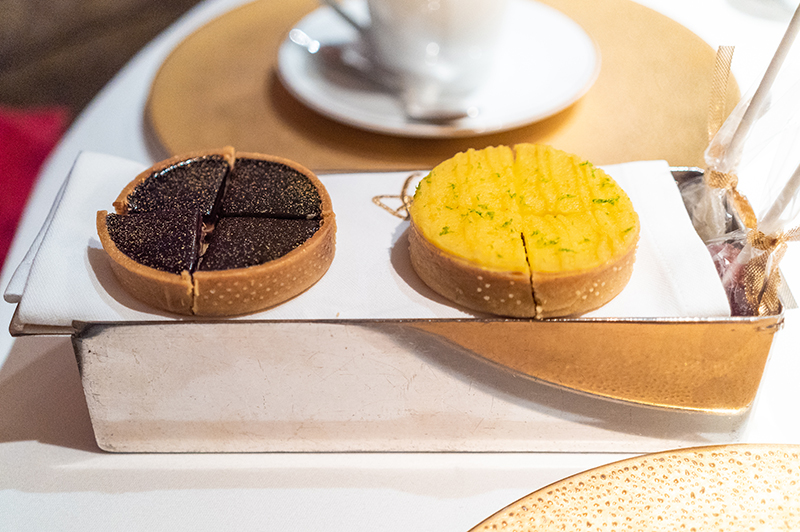 With all of that said, is Remy worth the surcharge? I have a tough time answering that question. The monetary cost plus the opportunity cost of dining here over the “free” meals is pretty steep, but Remy is so, so good. It’ll have you tasting flavors you never even knew existed; it’s like your sense of taste is heightened.

As with Victoria & Albert’s, Remy is something I can see doing for a rare special occasion. Palo is more my speed for a “regular” fine dining brunch or dinner. However, I’d absolutely do Remy again if I could find the excuse and stomach the surcharge. I just wouldn’t make a regular thing out of it. 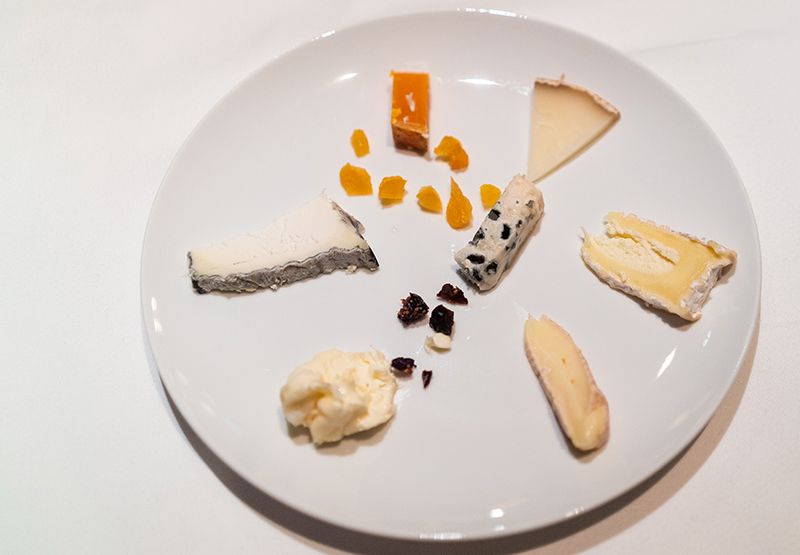 Undisputed and unbiased Disney Cruise Line expert Scott Sanders draws an interesting line in analyzing whether Remy is “worth it,” which I thought was worth borrowing for this review. He draws a comparison to Arnauld Lallement’s restaurant in his most recent Remy Dinner Review.

Scott notes that dinner at Lallement’s restaurant in France would cost ~$211/person, which makes $125 a deal by comparison. I can see where he’s coming from, but don’t totally agree for a couple of reasons. First, you have to account for the value of the dinner you’re forgoing aboard Disney Cruise Line, which is built into the cost of the itinerary. Using my $75/person number, that would put Remy at $200/person. 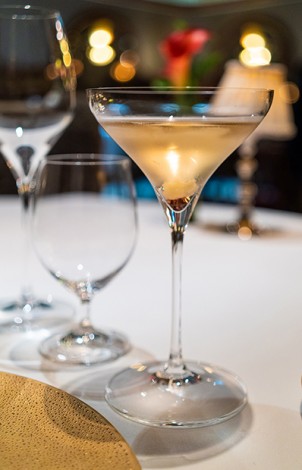 Second, a meal at a 3-star Michelin restaurant is not the same as one with the menu by a chef who has Michelin stars elsewhere. It should go without saying, but eating at Wolfgang Puck Express in the airport is not quite the same as eating at Spago in Beverly Hills.

Obviously, this comparison is hyperbolic and merely to illustrate my point. Any potential gap that may (or may not!) exist between Remy and Lallement’s restaurant in France is hardly as pronounced as the difference between an airport eatery and one of Los Angeles’ most-acclaimed restaurants. The point is that using chefs who have earned Michelin stars elsewhere to craft menus is a popular marketing tool. 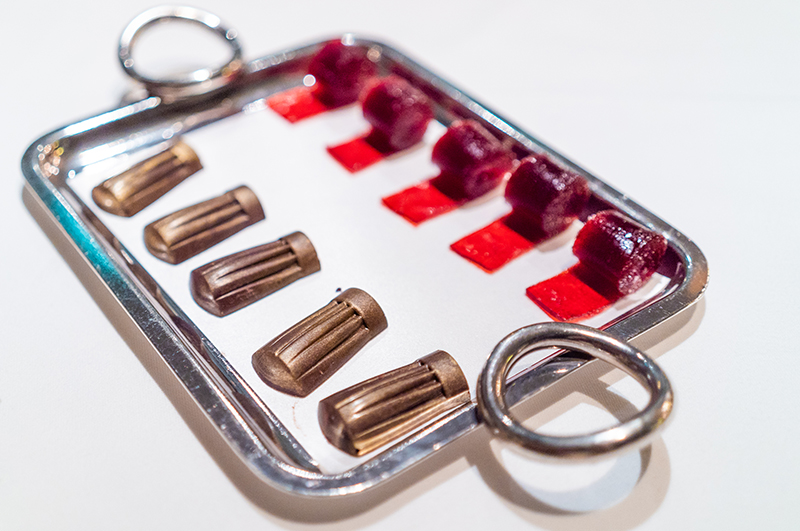 This is not to diminish the quality of Remy, which is exceptional. It’s simply to say that it’s tough to compare it to the chefs’ other restaurants when assessing value. Even with after having one of the best dining experiences of our lives at Remy, I’d still take the actual Michelin-starred restaurant in France over Remy if all else is equal.

Ultimately, Remy is a superlative experience, with exquisite attention to detail, quality of ingredients and dishes, plating, and level of attentiveness in the service. Remy is definitely on par with Victoria & Albert’s, and is worth a splurge at least once if you have a special occasion and the budget to justify it. From there, you can determine for yourself if Remy lives up to the hype and is worth of becoming a regular Disney Cruise Line experience, or if it’s great, but a one and done.

Have you dined at Remy? Do you think it’s worth the surcharge, even at the new rate? Do you agree or disagree with our review? Thoughts of your own to add? Any questions? Hearing feedback about your experiences is both interesting to us and helpful to other readers, so please share your thoughts below in the comments!