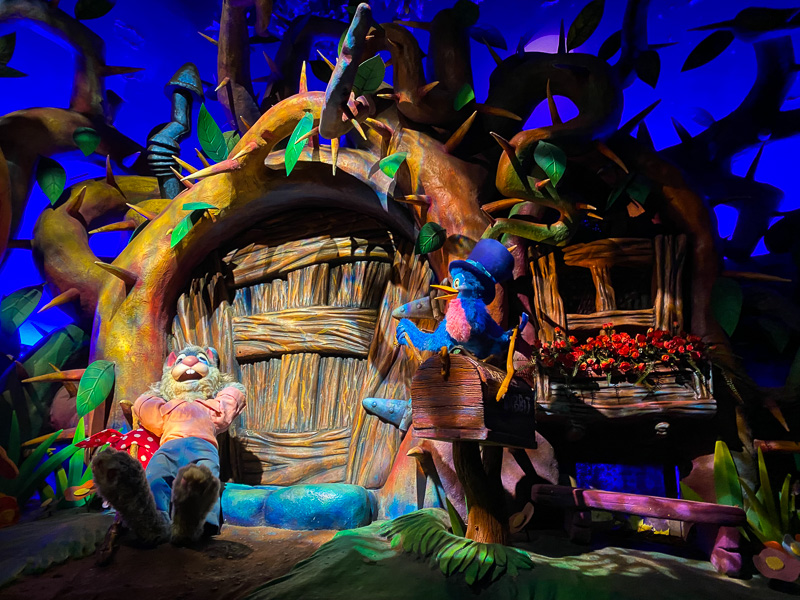 With the heart of summer season at Walt Disney World now underway, I headed to Magic Kingdom for rope drop. In this park opening report, I’ll (speed) walk you through my morning, with a step-by-step look at what I accomplished, strategy & tips, and more.

The day started out well enough. I woke up at 6:40 am, quickly showered, and was out the door of our room at Wilderness Lodge by around 6:50 am. Our room was relatively close to the dock, and to my surprise, a boat was waiting for for me when I arrived. Along with two other parties, our water taxi departed at 7:01 am.

The boat arrived at Magic Kingdom at 7:13 am. I was through security shortly thereafter, and the turnstiles opened literally as I was walking up to them. Every step of the way thus far, it felt like the seas had parted for me. The smoothest and fastest Magic Kingdom rope drop experience I had ever had up until this point. Little did I know that the wheels would fall off when the journey became, uh, bumpy.

Arriving onto Main Street USA by 7:16 am, I figured I had some time for quick photos before briskly walking to Fantasyland to queue up for my first attraction of the day. However, it had been a while since I last went from a cold hotel room to a humid Florida morning.

Not only was my lens still totally fogged over, but my DSLR battery totally drained due to the dramatic change in temperature. Not a huge deal. It was an ugly overcast morning, so the photos would be ugly anyway and my phone would suffice. If anything, the camera dying gave me an excuse for these photos being awful. 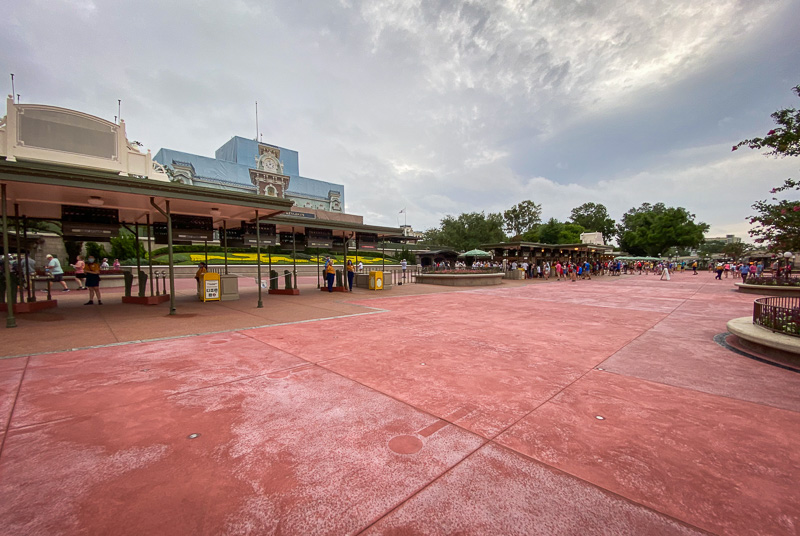 However, all of this is subject to change and almost certainly will be changing very soon. Epcot has already reverted to its old rope drop protocol, and it’s likely Magic Kingdom will follow suit in the coming weeks to prepare for the new on-site early entry program. 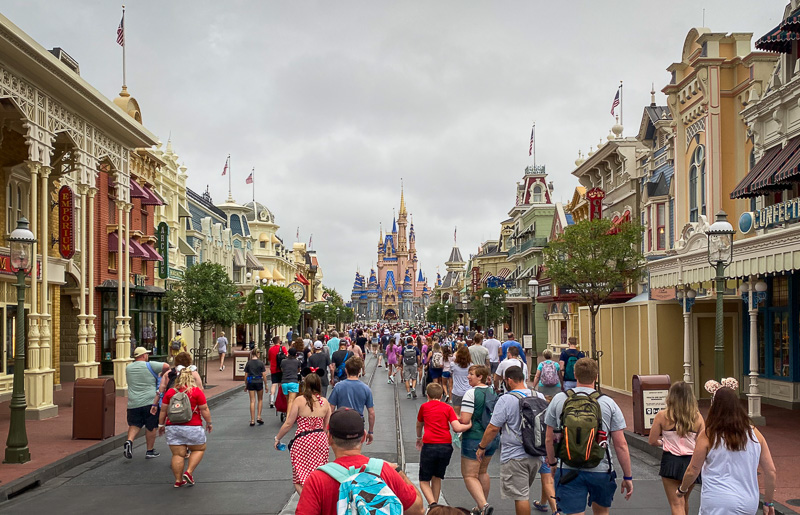 Following some quick shots to document the experience, I picked up the pace and briskly walked through Cinderella Castle–rather than the bridge to Tomorrowland–and headed to Seven Dwarfs Mine Train. While my approach would’ve been faster if I were heading for the attraction marquee, it was slightly slower for the end of the line, which wraps towards Storybook Circus.

I was in line for Seven Dwarfs Mine Train by 7:19 am. This is the earliest I’ve been in line for a Magic Kingdom attraction since Extra, Extra Magic Hours nearly two years ago. 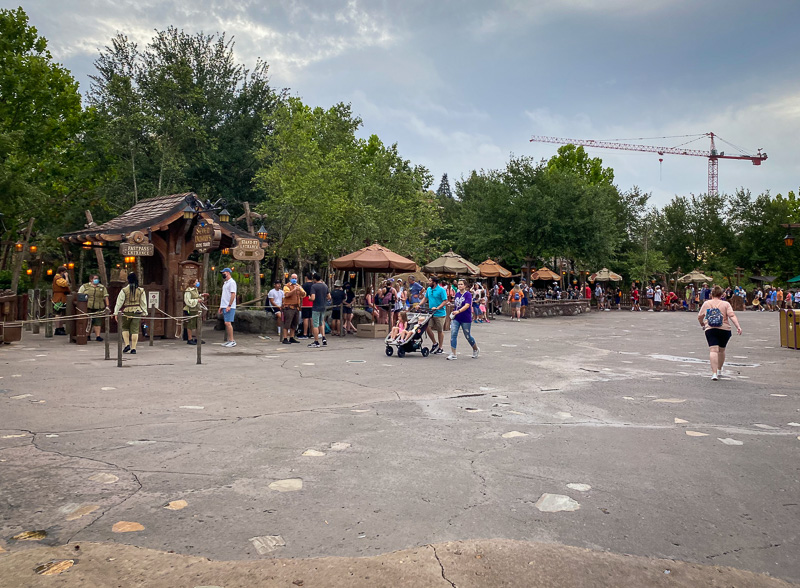 At this point, I was feeling really good about my morning. I suspected it would be 15-20 minutes before the ride started, but that was fine. I was close to the front, and it would’ve been no more than a 10 minute wait once the line got moving.

This was exciting. My whole reason for rope dropping Magic Kingdom was to arrive as early as possible for Seven Dwarfs Mine Train, and see if I could conceivably ride it twice before the wave of crowds. This is theoretically possible, but only if you’re staying on-site, as the Transportation and Ticket Center parking doesn’t open early enough to make this viable from off-site. If this is good strategy, I was perfectly poised to figure it out this morning! 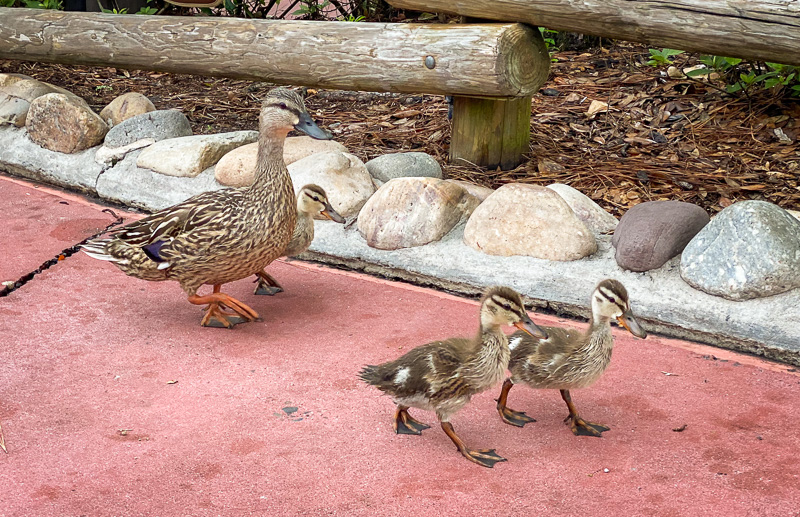 You know that saying? The best laid plans of the Mouse and men often go awry…

When 7:40 am rolled around, it seemed like Seven Dwarfs Mine Train wasn’t ready to roll. If both of us had gone to Magic Kingdom, I could’ve gone to scout Peter Pan’s Flight or other attractions while Sarah held our place in line. However, we have a longstanding agreement that Sarah can “enjoy the hotel room” on early mornings when the sky is overcast, so I was on my own. (On pretty mornings, I race around taking photos while she does the waiting and tests strategy.)

At 8 am, an announcement was made that Seven Dwarfs Mine Train wasn’t yet ready to open and there was no ETA on when the ride would open. I bailed from the line immediately upon hearing that. Interestingly, no one in front of or behind me did the same.

They ended up making the right call, as Seven Dwarfs Mine Train opened at 8:17 am (per My Disney Experience, which I was repeatedly refreshing), right as I was about to board Peter Pan’s Flight. I only point this out because it’s fascinating to me that most guests would continue sinking time into an unknown versus cutting loses.

My total wait for Peter Pan’s Flight was 15 minutes, which isn’t terrible…unless you account for how long I wasted in line for Seven Dwarfs Mine Train. I could’ve probably done Peter Pan’s Flight three times with no wait during that time. By the time I got off Peter Pan’s Flight, the extended queue was all the way back to Columbia Harbour House.

From there, it was on to Splash Mountain. 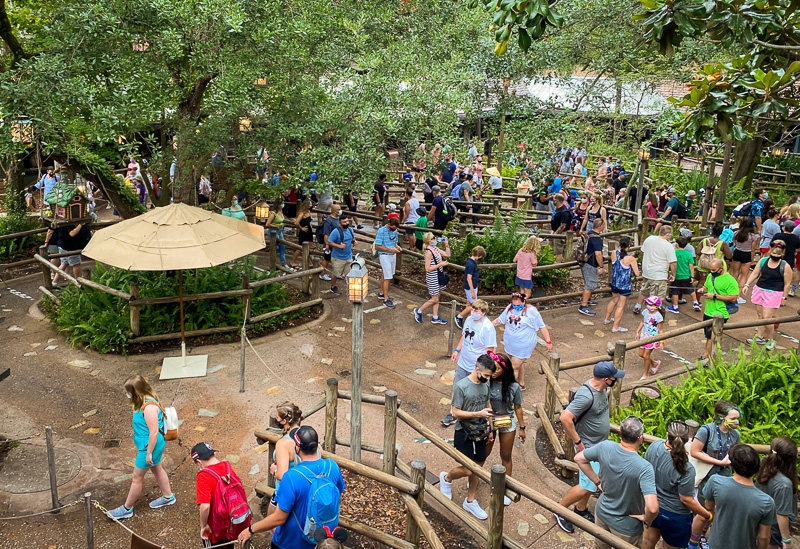 In line at 8:25 am with a posted wait of 5 minutes that was very clearly wrong just by looking at the outdoor queue in use.

Posted wait jumped to 30 minutes and then 45 while I was in line. 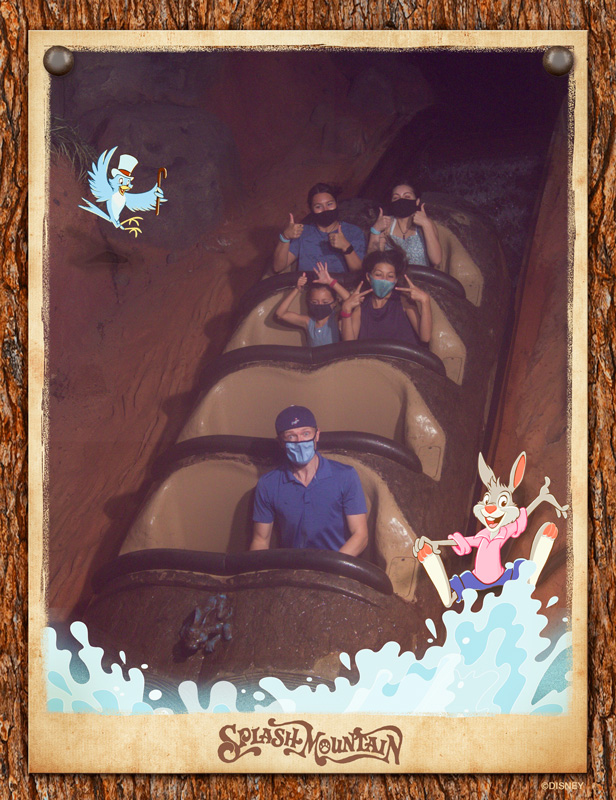 My total wait for Splash Mountain ended up being 20 minutes.

This wasn’t as bad as I was expecting, and would’ve been even shorter if every row in the logs was being loaded. 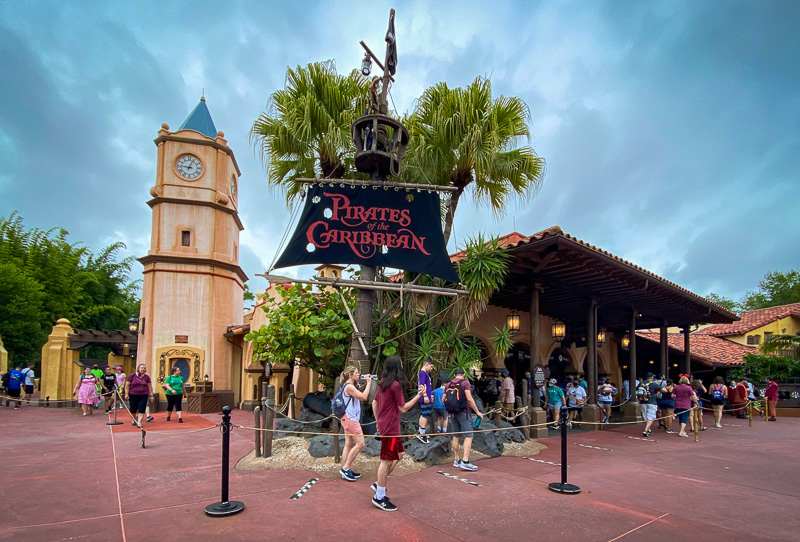 My planned next stops were in Adventureland, but the overflow queue was already in use for Pirates of the Caribbean and Jungle Cruise had a posted 50 minute wait.

I knew both of those lines would be shorter later in the day, so I wasn’t going continue my morning as planned and “fight the wave.” 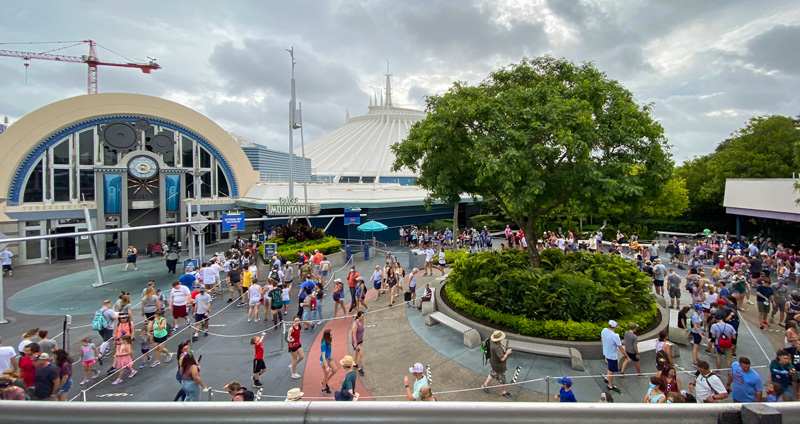 Instead, I headed for Tomorrowland for a couple of laps on the PeopleMover.

While gliding around above Tomorrowland, it was easy to see that crowds were already building even though Magic Kingdom had been open for less than an hour. I’m assuming this is the result of increased Disney Park Pass distribution, as it got busier, faster than any rope drop I’ve done in the last few months. 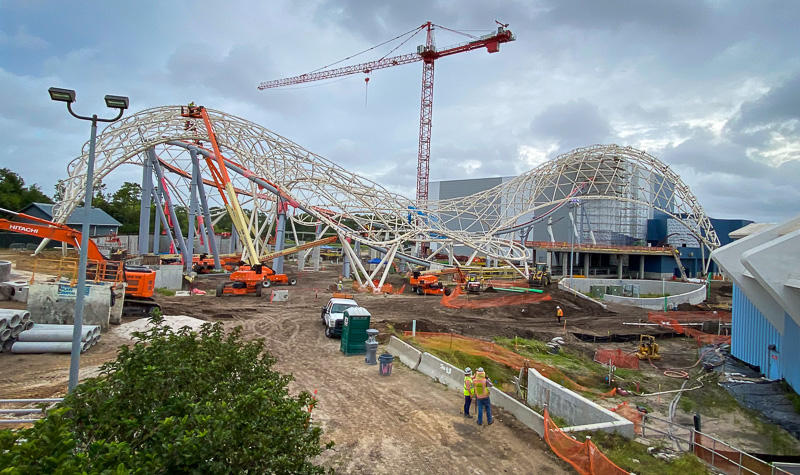 On the plus side, I did observe more construction activity on TRON Lightcycle Run than I’ve seen since pre-closure.

There were dozens of construction workers on the site, fresh scaffolding has been erected where the gravity building was previously enclosed, and safety nets are being installed around the canopy. Here’s hoping this opens in 2022!

There were still attractions with short waits by 8:38 am, but the list is getting smaller and smaller. Keep in mind that this is only a little over a half hour after Magic Kingdom opened. When it comes to rope dropping Walt Disney World, early is on time, on time is late, and late is unacceptable.

Seriously, anyone entering Magic Kingdom at 9 am and planning to stay for ~8 hours would be objectively better off arriving after noon. Most of the headliners I would’ve prioritized first thing in the morning would end up having shorter wait times in the late afternoon and evening hours. This is a dynamic I don’t see changing in the next couple of months, as heavy crowds early in the day plus oppressive heat and humidity will lead to guest “burnout” and more people leaving Magic Kingdom before things get pleasant at night. 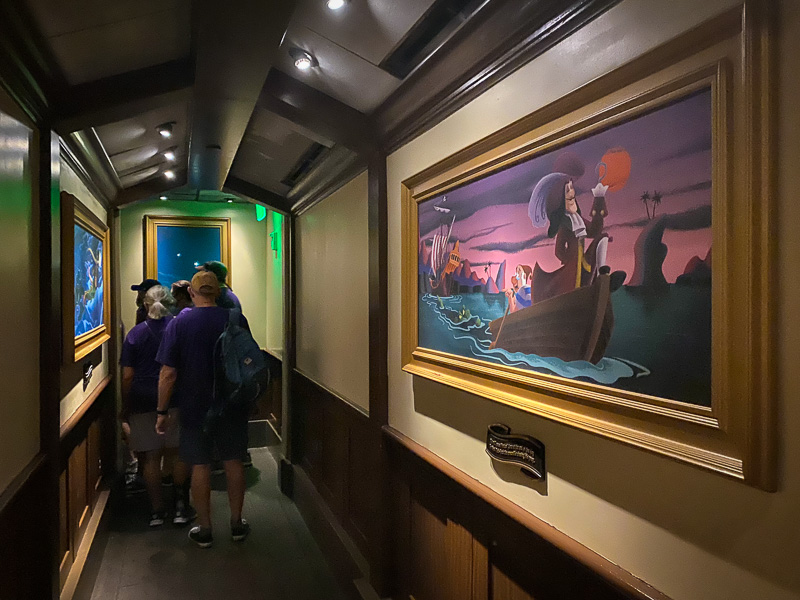 Otherwise, there’s not a ton to glean from my morning in Magic Kingdom. I debated not writing about this at all, but I think it’s worthwhile from a few perspectives.

First, it underscores just how limited of a window there is for beating the crowds at rope drop, and how essential it is to arrive well before park opening. Second, this should illustrate that things don’t always go as planned, and it’s important not to rigidly stick to an itinerary that isn’t working. Be dynamic and adjust on the fly as necessary–delayed attraction openings and ride breakdowns are pretty common. 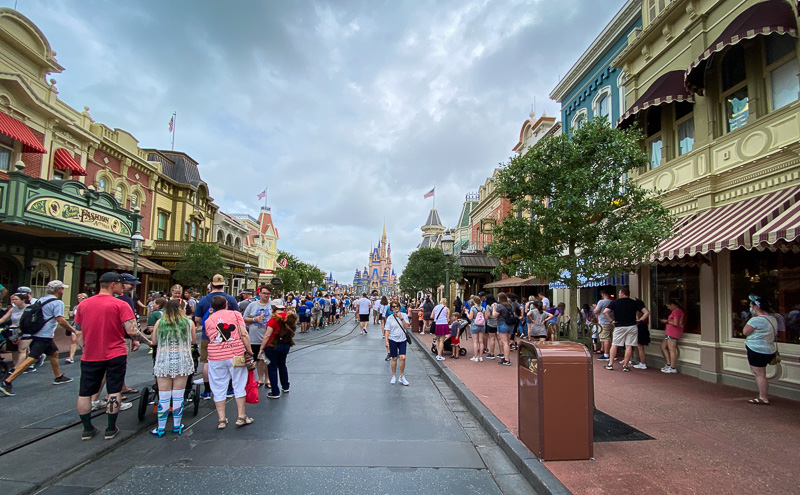 Third, this is probably a preview of what you should expect this summer at Walt Disney World as crowds continue to grow. (Above was the crowd as I headed back onto Main Street at 9:30 am, with huge lines for PhotoPass and Starbucks. While the latter is “mandatory” in the morning, PhotoPass would have virtually no line–and a pretty sky–after lunch.)

Having a good plan is critically important, as is beating the crowds at the beginning of the day and outlasting them at the end. (We plan on doing a “park closing report” later this week to illustrate the importance of staying late.) Figuring out what to do in the middle so you don’t get burned out is also crucial, and often overlooked. 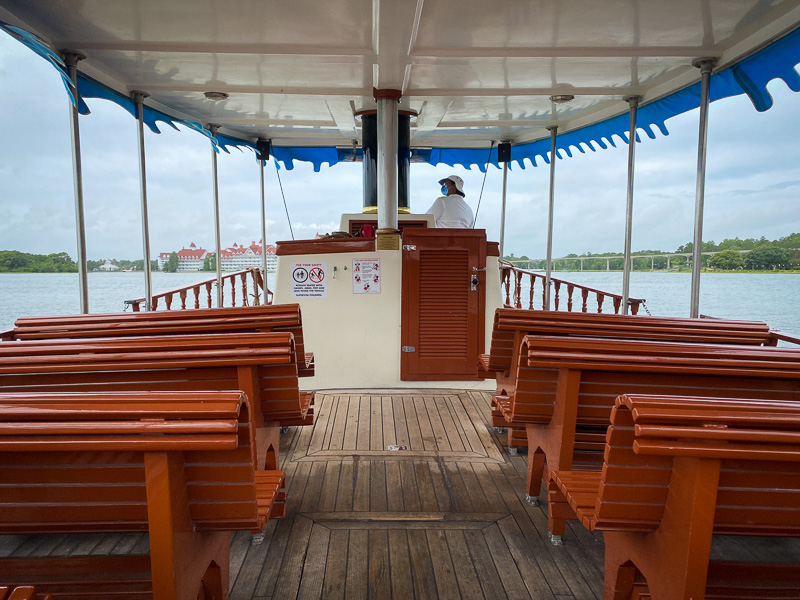 Finally, I got up early, got all sweaty racing around Magic Kingdom, and became incredibly frustrated in the process. You better believe I’m not letting all those headaches “go to waste.” Also, I think showcasing our shortcomings is valuable in both demonstrating we’re not Walt Disney World “strategy savants” and in setting realistic expectations.

If all you ever read about here is how flawless and great things go for us at Walt Disney World, it might be doubly discouraging when you cannot replicate those results. It should go without saying, but we’re human and have “travel fails” all the time. While not ideal in the moment, that comes with the territory and is part of the experience and comes. If you can roll with the punches and shrug off failures, they’ll be fond memories you can laugh about later. Remember, expecting perfection only invites disappointment!

Thoughts on morning in Magic Kingdom? Have any of your own rope drop disappointments? How would you have done things differently? Any other feedback on arriving early to the Walt Disney World theme parks? Agree or disagree with our advice or approach? Any questions we can help you answer? Hearing your feedback—even when you disagree with us—is both interesting to us and helpful to other readers, so please share your thoughts below in the comments!