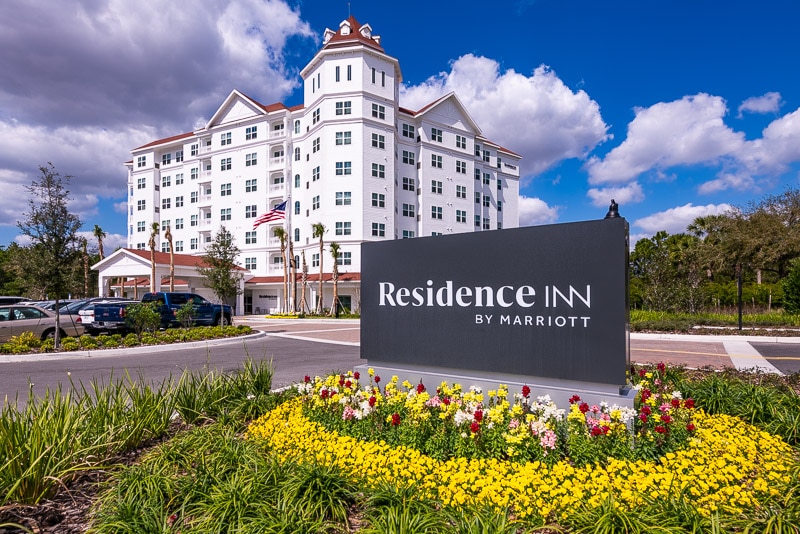 Whether this Residence Inn is an on-site or off-site hotel is a matter of perspective. Located off Western Way and State Road 429 near Coronado Springs and Animal Kingdom, the hotel is within the Disney-controlled Reedy Creek Improvement District and part of Flamingo Crossings, which is being developed by Walt Disney World. However, it’s just outside the WDW gateway that greets visitors and typically demarcates “off-site” and the Disney bubble.

For its part, the Residence Inn by Marriott Orlando at Flamingo Crossings Town Center is about a 12 minute drive to Animal Kingdom or Hollywood Studios, and slightly longer to Epcot and Magic Kingdom.

Residence Inn has a quiet location at the “back” of Flamingo Crossings, away from the interstate while still being a short walk from Target, Five Guys, and everywhere else. This all makes it an conveniently-located option if you want a place to buy groceries or sundries–or late night burgers!

Modern extended stay hotels might be unfamiliar to Walt Disney World fans, but we’ve seen many of the current generation of these products in Anaheim. Within walking distance of Disneyland, there are numerous Residence Inn, SpringHill Suites, Home2 Suites, Element, and TownePlace Suites. The formulaic style has become ubiquitous there in the last decade or so–it’s great to see more of these being built around Walt Disney World, as new extended stay hotels are a great fit for many families.

Banish whatever negative preconceived notions of extended stay hotels you might have, as this generation is different. Rather than being the bland, boring, and utilitarian domain of corporate consultants (and not a cool one like George Clooney in Up in the Air; more like Bob Slydell in Office Space) the Residence Inn redefines what it means to be an extended stay hotel. Or, at the very least, makes more more appealing to families, business travelers, and young travelers. 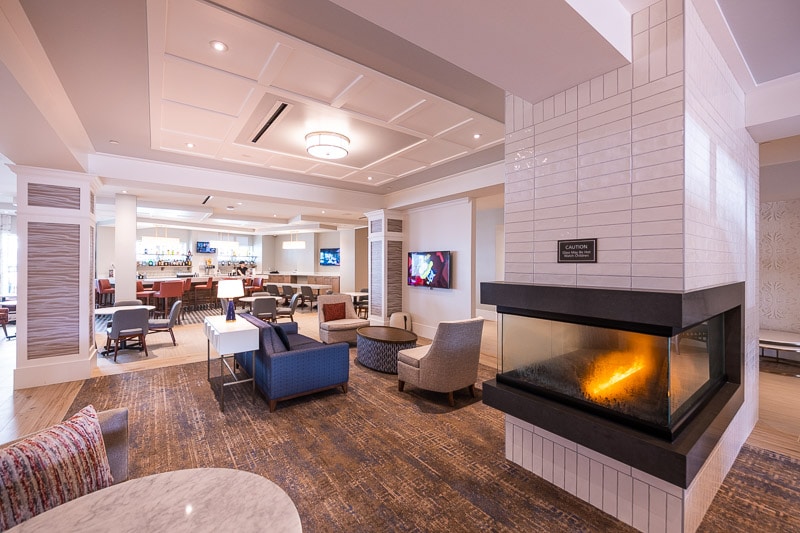 This evolution of extended stay hotels is actually an industry-wide thing, and the major hoteliers have refined their product in the last several years. For those who are curious and want a bit of interesting (I think!) backstory, these hotels are innovating to compete with Airbnb and evolving consumer behavior, making efforts to grow this lucrative and in-demand segment of the hotel industry, and also meeting the higher expectations of young professionals and leisure travelers.

All of this is evident in the Residence Inn by Marriott Orlando at Flamingo Crossings Town Center. The downstairs lobby is modern, complete with inviting lounges, fireplaces, and large common areas for breakfast. None of this is trendy and hip, but it’s also not dull and boring either. It’s almost as if the Residence Inn has been precision-engineered to appeal across demographics.

This bar feels fun enough for the young business traveler ready to let loose after a long day of learning about the latest cutting edge tech at a Xerox expo, while still being approachable for the parents who likewise want to unwind after a long day in Walt Disney World. It’s actually impressive how the hotel as a whole toes that line, catering to both families and business travelers. 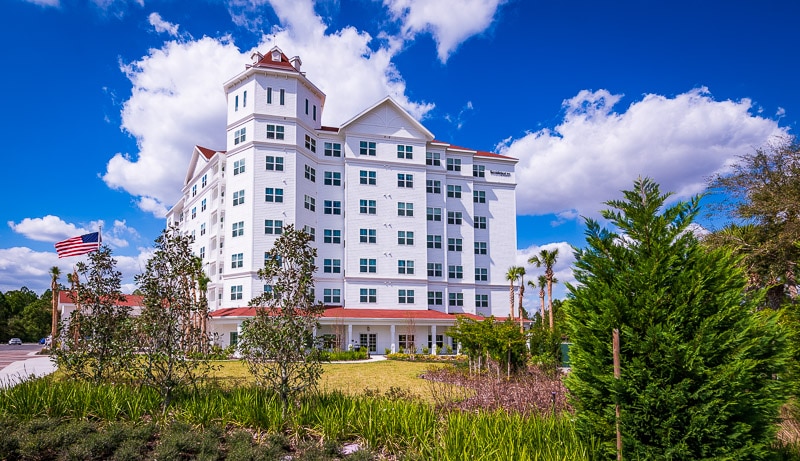 If an extended stay hotel actually being nice and somewhat on-trend doesn’t throw you for a loop, perhaps the exterior, vaguely resembling Disney’s Grand Floridian Resort & Spa, will. Some might say it’s the Grand Faux-ridian. (Wocka wocka!)

The key differences? The Grand Faux-ridian isn’t within walking distance of Magic Kingdom, nor does it cost $750+ per night. Oh, and the guest rooms at the fake Grand Floridian are arguably nicer. 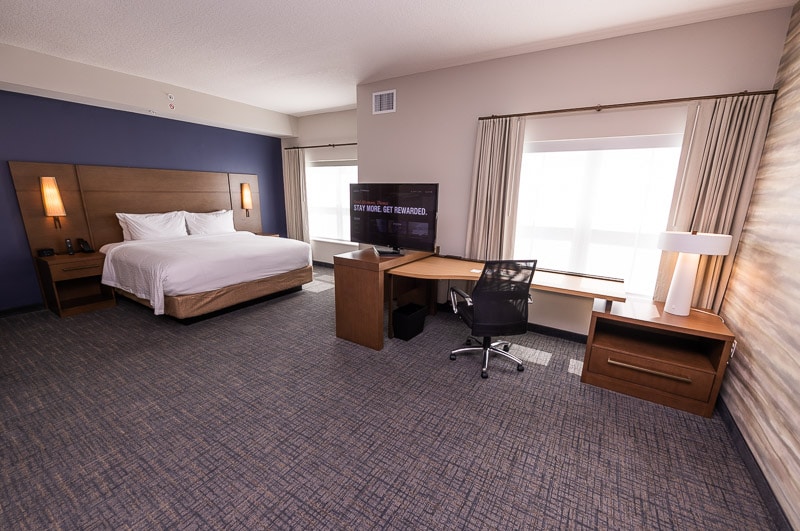 We might as well start the review there, as the rooms are one of the big selling points of the Residence Inn at Flamingo Crossings.

This hotel offers a variety of room options: spacious studios, plus one and two-bedroom suites with separate living and sleeping areas. All rooms also have fully-equipped kitchens, too. 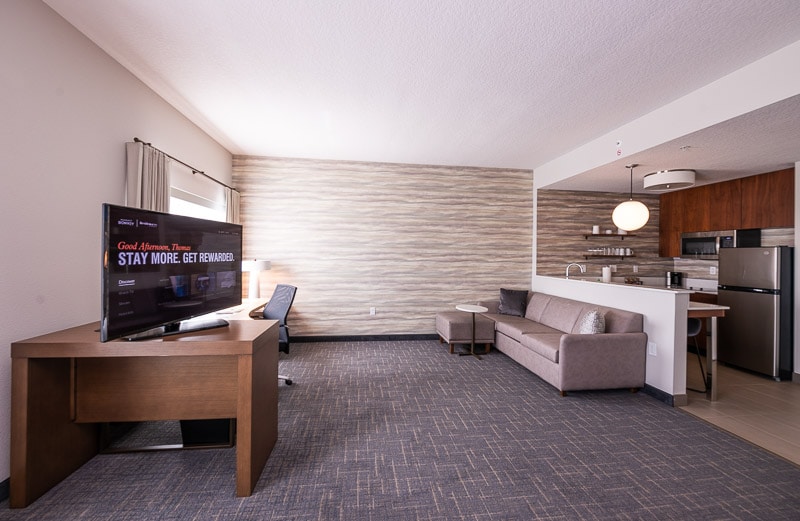 For this stay, I booked the studio. This room is a surprisingly spacious 440 square feet, putting it on par with the Grand Floridian.

With that said, the square footage is utilized better at the fake Grand Floridian. There’s the bed plus a sitting area, desk, and television that swivels around. Most notably, there’s a full kitchen. 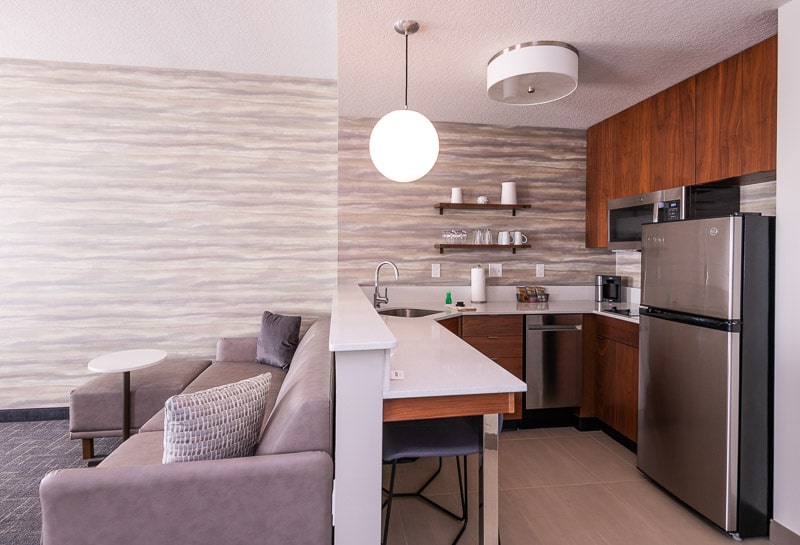 For most families, the full kitchen in all rooms is going to be the main selling point of the Residence Inn. This means a full-sized fridge, stovetop (no oven), microwave, and dishwasher.

The kitchen is also stocked with pots, pans, and all the dishes you’ll possibly need. Couple this with the Target at Flamingo Crossings that’s about a 5-10 minute walk from here, and you can easily make meals in your room. 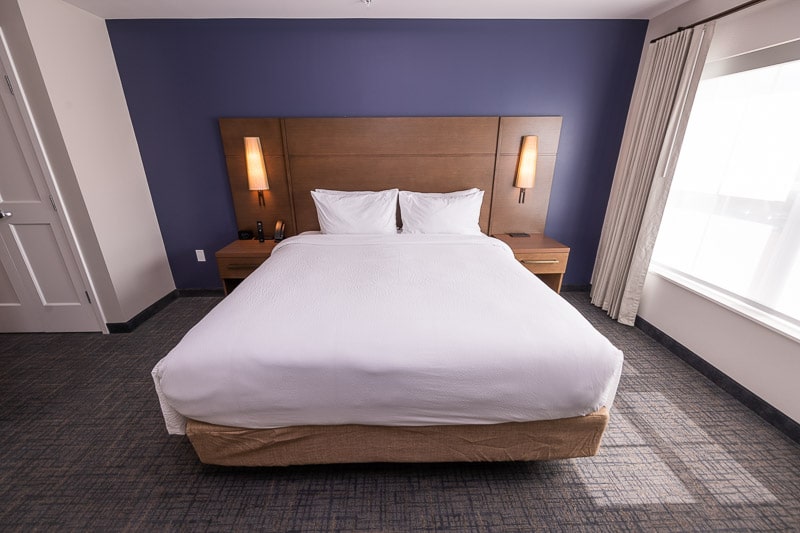 The room is nicely designed and feels modern thanks to the carpet, lighting, artwork, and other detail touches. The color scheme is a bit muted and subdued for my tastes, but this style probably has been focus-tested as the most universally-appealing/least offensive of hotel room styles (and one that won’t date itself too quickly).

Bedding and pillows are perfectly plush, and will get the job done after a long day in the parks. It’s nothing exceptional, but pretty comparable to most non-luxury hotels both on-site and off-site. There really isn’t a huge range in bedding quality among hotels at or near Walt Disney World. Most of the newer, reasonably nice ones are very comparable to one another. 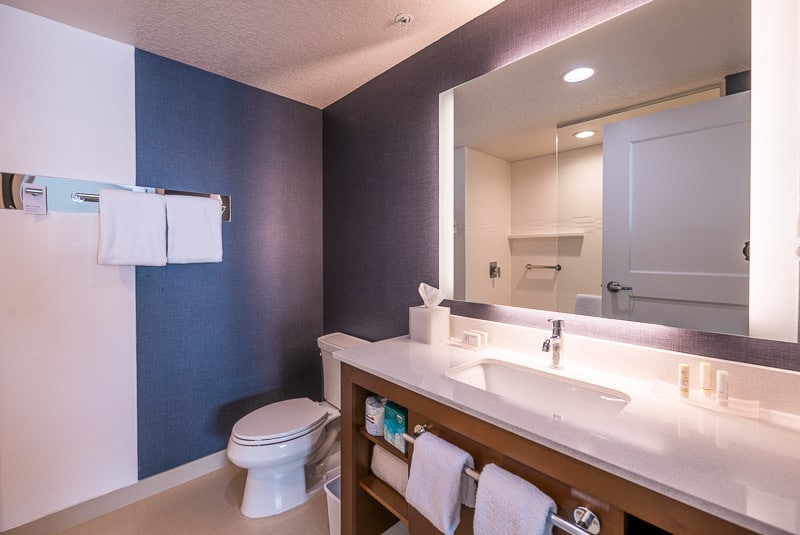 The bathrooms at the Residence Inn are a definite plus, and in the same upgraded style as others around Flamingo Crossings. Nice sink, counter top, and highly effective lighting.

Shower is also a walk-in as can be expected from pretty much any new hotel being built today. Like the room, this bathroom is quite spacious. 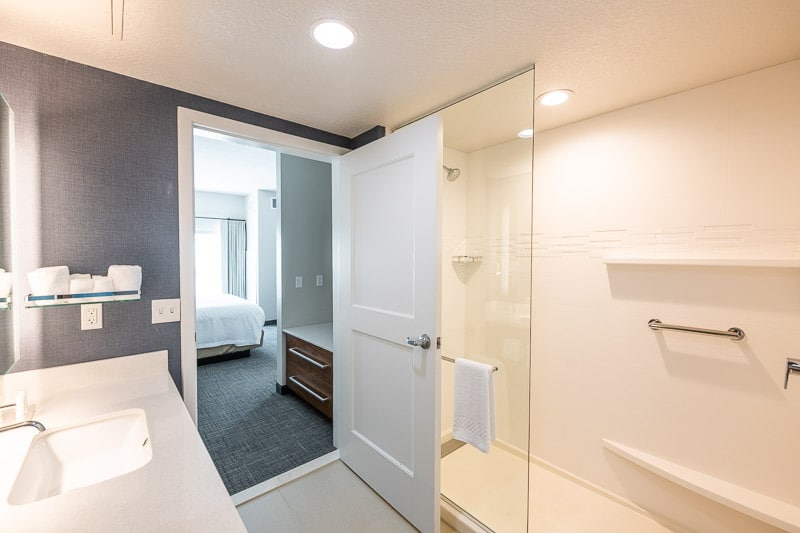 The basic rooms at the Residence Inn rank very highly relative the competition at Flamingo Crossings.

I’ve done a number of standard or studio stays already, and this is the only one that’s more like a 1-bedroom unit. Essentially all it’s missing is the wall separating the bedroom and living room. Anyone who will use that full kitchen will definitely favor the Residence Inn over most other regular room options at Flamingo Crossings.

Prices obviously vary by date, but nightly rates at the Residence Inn by Marriott Orlando at Flamingo Crossings Town Center are typically under $200 per night. (Travel costs have skyrocketed recently, but all these hotels were in the $100/night range not too long ago…and hopefully will be again!)

In my random searches for rates this summer, I found this Residence Inn to be within $20/night of everything at Flamingo Crossings except the SpringHill Suites across the street, which is a few years older than everything else. In light of what the Residence Inn offers relative to the competition, I’d consider this pricing incredibly fair. 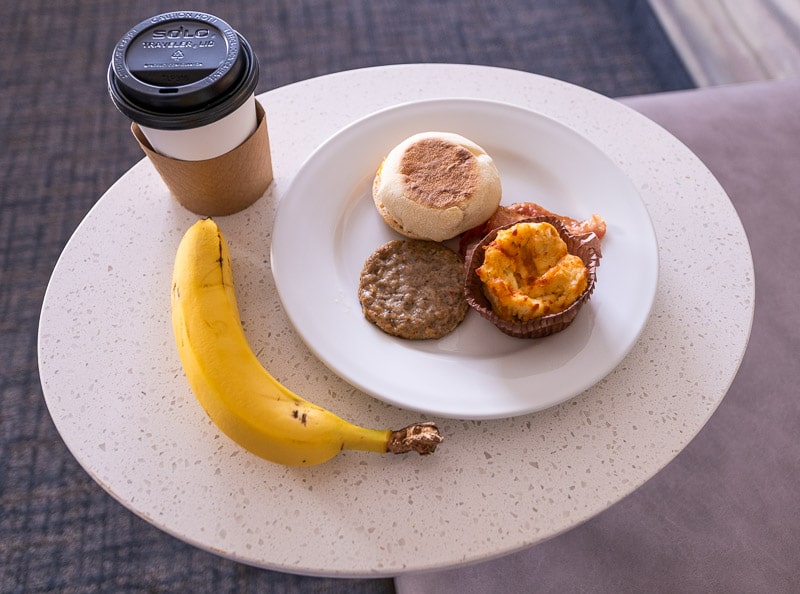 The breakfast offered in the mornings is a bit on the sparse side, but it’s still one of the better free breakfasts among the hotels near Walt Disney World. The room where this breakfast is served is huge, and there’s also outdoor seating near the pool.

While it’s not great, there are hot options, proteins, and fruit. If you want approximately 738% of your daily serving of sugar, there are even pre-packaged Liege Waffles. 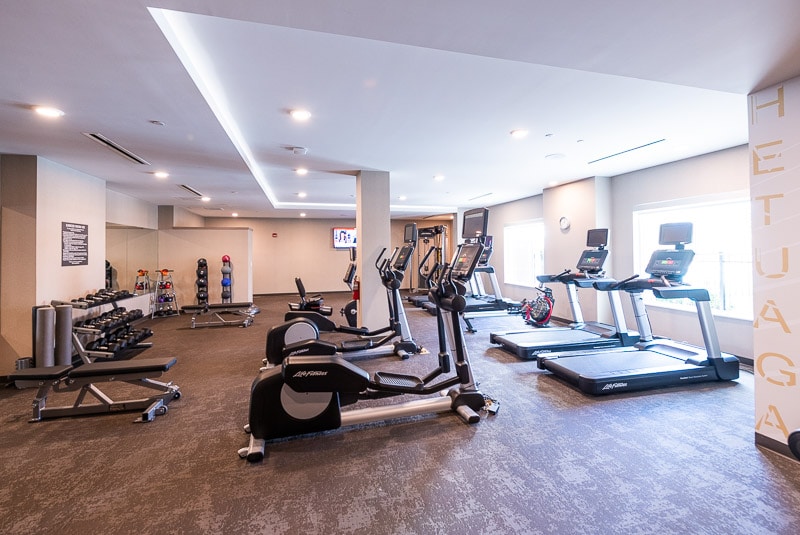 Other amenities include a 24-hour fitness center, self-service laundry room, lobby convenience store, and bar/lounge. As you’d likely expect with a brand new hotel, the fitness center here is quite nice. Huge, and with a ton of equipment and large screens on each device. 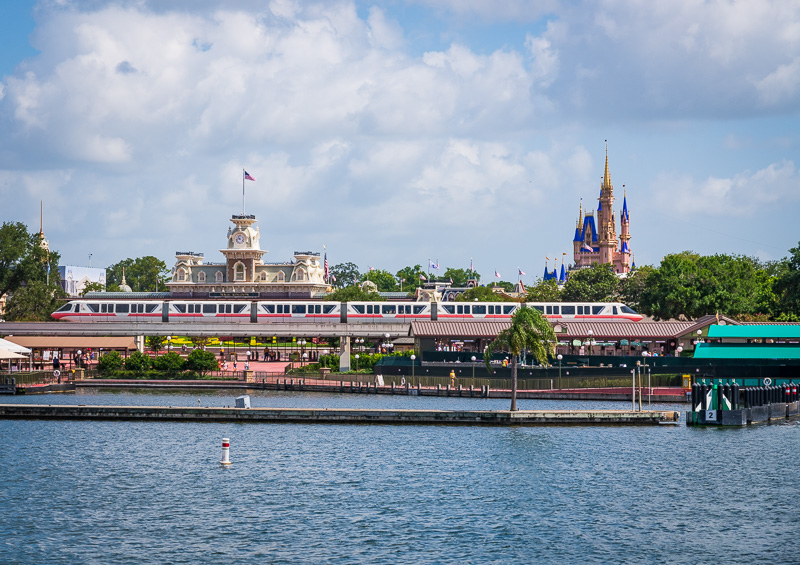 Transportation is available from most of these Flamingo Crossings hotels, but comes with several huge asterisks. The bus is paid (currently $5 per person), must be scheduled at least an hour in advance, has limited departure & return times, and is a shared shuttle from Flamingo Crossings Hotels to the Walt Disney World Transportation and Ticket Center.

Suffice to say, no one who values their time should use this Flamingo Crossings bus transportation–you need to have your own vehicle or use a rideshare service. An Uber or Lyft will cost you around $10 to $20 depending on the park you’re visiting and demand, and that’s the far superior option. One thing to note is that pick-up times are often lengthy (~10 minutes) out here, as this is not a prime area for drivers. 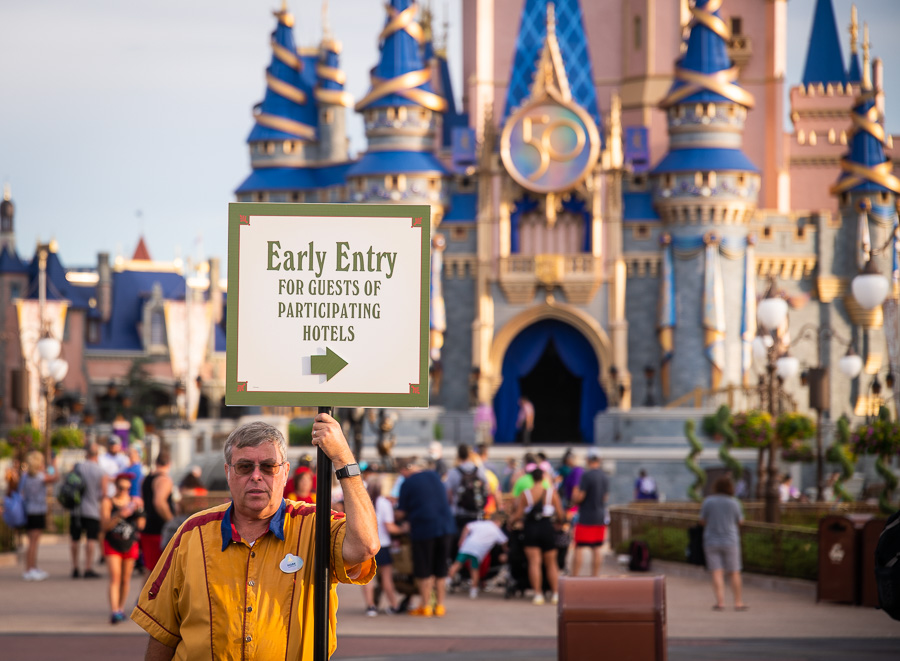 Additionally, none of the Flamingo Crossings hotels are eligible for Early Entry or Extended Evening Hours. This is another potentially big blow, as those on-site perks can be advantageous for early risers or night owls.

Not having efficient “free” transportation and the “free” extra hours are probably the most compelling reasons to stay on-site. Our advice: put the money saved on accommodations (and potentially meals) towards Genie+ and Uber/Lyft. There’s still a decent chance you’ll come out ahead. Of course, that won’t be the case for everyone–do the math and figure out which is better for your needs and preferences. 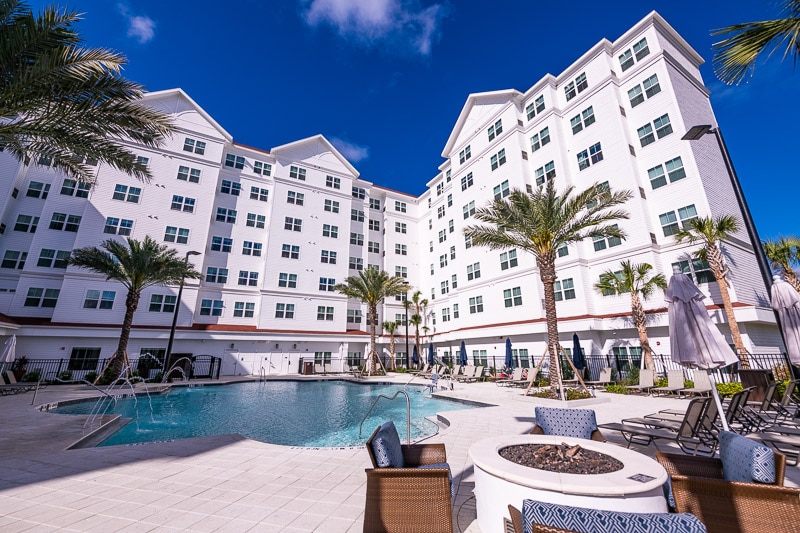 The pool area is really nice, with plenty of seating, fire pits, and even an outdoor bar. There are also little fountains that provide soothing sounds when this area is uncrowded.

The problem is that this area was seldom uncrowded during my stay. Don’t let this photo fool you–I took it early in the morning to avoid awkwardness. Midday and in the evening, this area was packed. A lot of hotels in Central Florida have fantastic pool areas, but this isn’t one of them–this pool is undersized for the hotel.

Overall, the Residence Inn by Marriott Orlando at Flamingo Crossings Town Center earns our highest recommendation, and its deserving of the Grand Faux-ridian moniker as a sincere form of praise. That undersized pool is about the only point of criticism, and even that might not be a major problem for many families. This hotel will defy guest expectations for an extended stay hotel, and it’s nice to finally see a well-executed version of this concept so close to Walt Disney World.

Across every demographic I can think of, the Grand Faux-ridian hotel performs incredibly well. It’s great for couples who want to a fully stocked fridge of beers and perfect for families looking to save money by cooking their own meals. Pretty much anyone wanting a bit more space or the ability to prepare meals/drinks will love it. When it comes to rankings for Flamingo Crossings hotels, the Residence Inn is currently #1. When expanding that to all hotels near Walt Disney World, it scores near the top in terms of value for money.

Have you stayed at the Residence Inn by Marriott Orlando at Flamingo Crossings Town Center? What did you think of the room layout and quality? Did the full kitchen or living area appeal to you? Was the bedding satisfactory? Did you enjoy your stay at this hotel? Thoughts on the breakfast? Considering the Residence Inn? Hearing your feedback about your experiences is both interesting to us and helpful to other readers, so please share your thoughts or questions below in the comments!