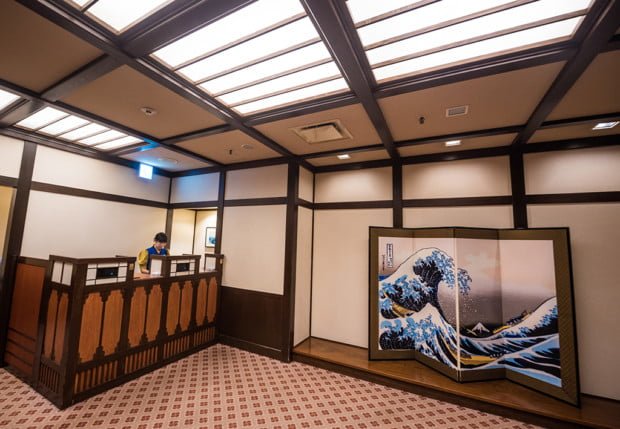 As a Disney geek, the history of Restaurant Hokusai is incredibly fascinating to me. For one, the restaurant appears relatively untouched since it opened in 1984; it’s one thing that has not changed much at Tokyo Disneyland over the years. Despite this, it is not an opening day original. Tokyo Disneyland opened on April 15, 1983, but Restaurant Hokusai did not open for over another year, until July 1984.

Restaurant Hokusai was actually the first substantial addition/change Oriental Land Company made to the park, and it was swiftly added due to complaints about the lack of Japanese cuisine in Tokyo Disneyland. Up until that point, Disney and OLC had played it safe with the design of Tokyo Disneyland, with 90%+ of what existed on opening day being cloned from Disneyland or Walt Disney World. The idea was to create a westernized experience they thought would appeal to guests, and it largely did–with the exception of the food.

It’s not as if they really went out on a limb with Restaurant Hokusai, but it is fascinating as the first new development of the park. The name of this restaurant is an homage to Hokusai Katsushika, a Japanese artist, ukiyo-e painter, and printmaker of the Edo period. Even if you’ve never heard of him, you’re probably familiar with his Thirty-Six Views of Mount Fuji series, which includes the recognizable Great Wave of Kanagawa piece (see top photo). 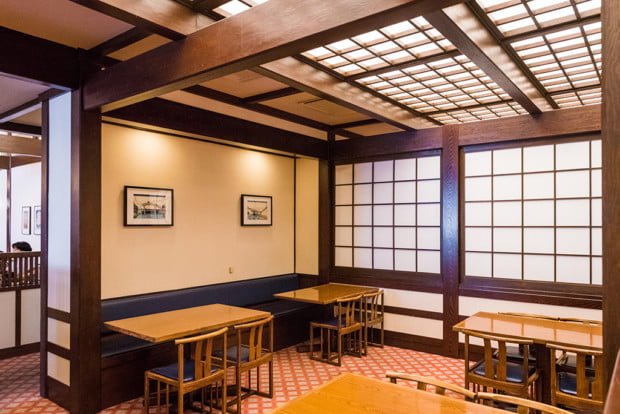 Since World Bazaar is set in the late 19th century to early 20th century, and Hokusai Katsushika was an artist at the early end of that same period, he was chosen as an appropriate fit for the classic style of World Bazaar. 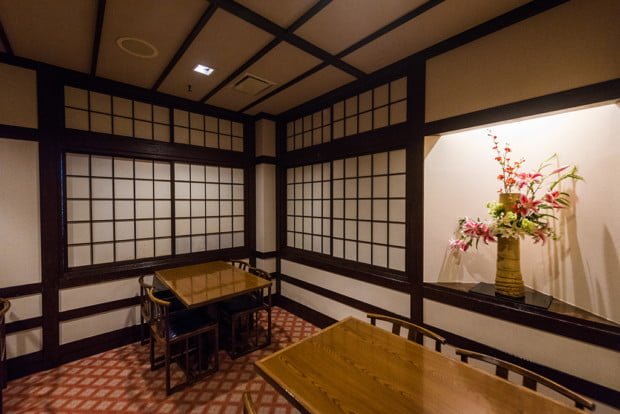 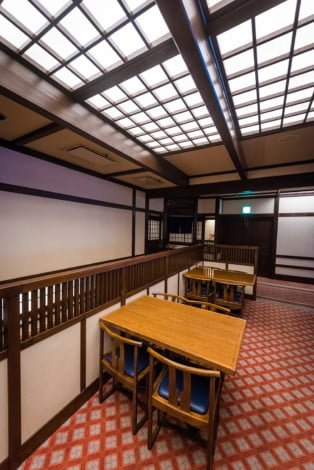 Thematically, Restaurant Hokusai doesn’t have a lot going on, but this isn’t necessarily a bad thing. For Japanese guests (particularly the elderly who don’t want foreign cuisine), it offers a familiar and comfortable setting. For tourists like us, it feels like an authentic slice of Japan. It actually reminded me of a restaurant we visited in Kyoto’s Higashiyama District, except with Disney polish. 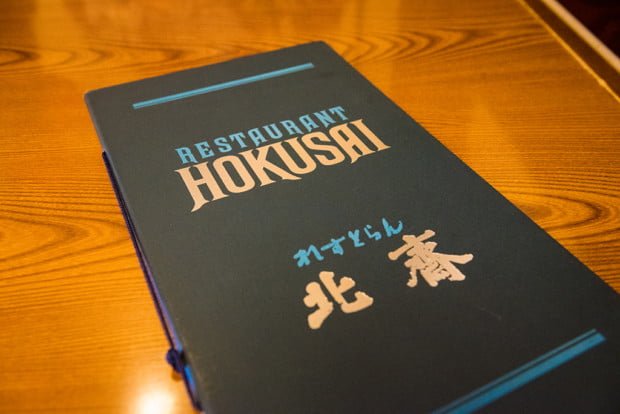 Perhaps modeling the design after something like Kawaii Monster Cafe would’ve given it authenticity and more elaborate theming, but that might have been slightly out of place in World Bazaar. All things considered, the ambiance worked well for me, even if it’s far from the high water mark of Imagineering. 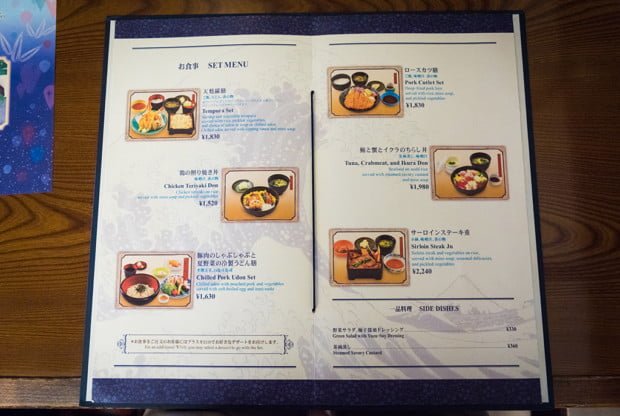 Moving to the menu, there are several traditional Japanese sets available, plus various special sets that tend to offer something different. 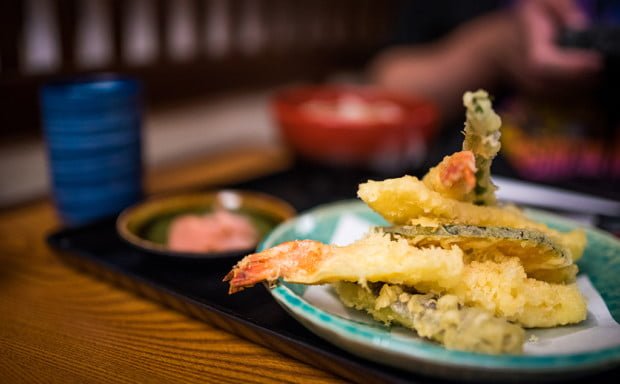 Jennifer and Guy Selga joined us for this meal. Guy ordered the Tempura Set, which was shrimp and vegetable tempura, served with udon… 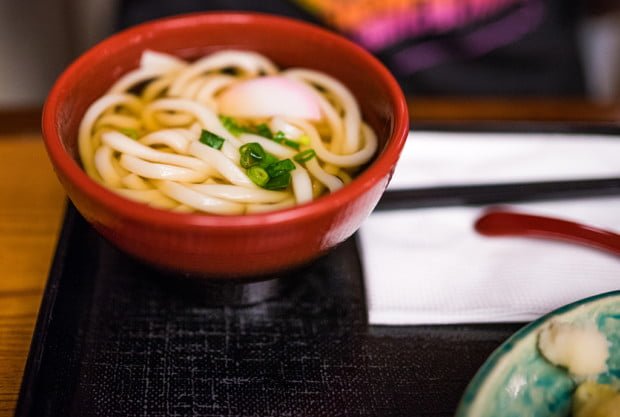 Guy was impressed with the tempura and remarked that it was better than comparably priced tempura in the states. However, Guy also spent most of the meal watching Tim Burton movies on his phone and getting hyped for Alice 2, which he predicted would be the crown jewel of American cinema and the most commercially successful film ever. Point being, his judgment might be suspect. 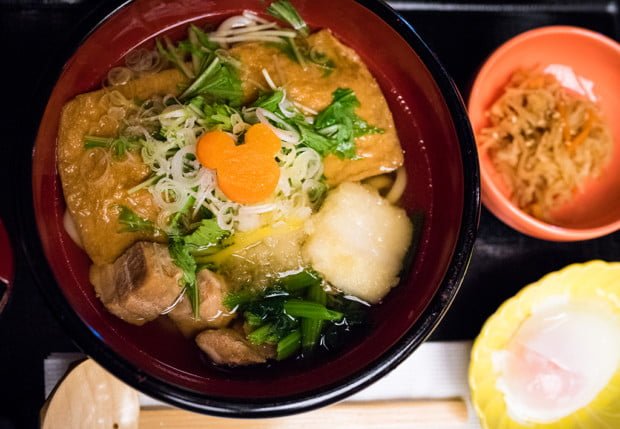 Sarah ordered the Chilled Pork Udon Set, which contained tofu and a variety of seasonal veggies. (Offer a dish with Mickey Mouse-shaped food and Sarah is there.) 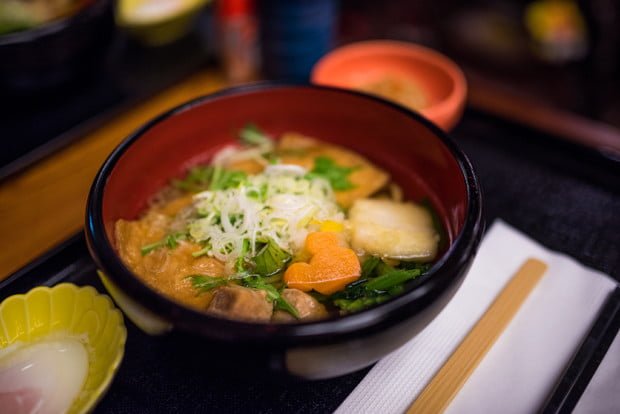 Mickey aside, Sarah also liked this, and thought it was a quality meal for under $15. All of our meals were under $20 each; not necessarily reasonable as compared to similar spots around Tokyo, but for a Disney table service meal, the value for money was exceptional. 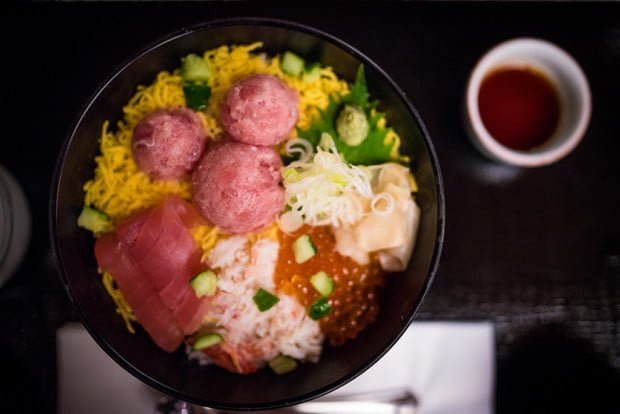 I had the Tuna, Crabmeat and Ikura Don. 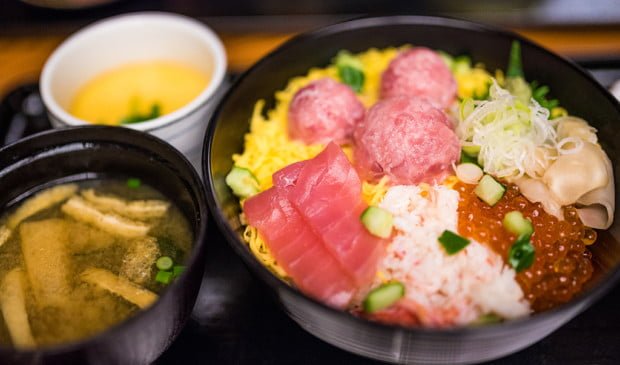 The variety of seafood here coupled with the sushi rice made for a dish that was flavorful throughout, and filling without being overly heavy. It was a tad on the salty side, and the quality of the seafood isn’t sashimi grade or anything, but I found it to be a tasty and very well-rounded dish. I enjoyed it so much that I ended up ordering something similar when we dined at Restaurant Sakura in Tokyo DisneySea. 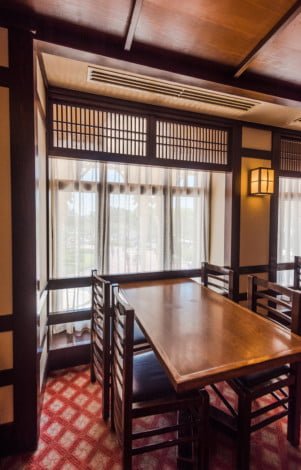 We were able to grab a Priority Seating reservation upon entering Tokyo Disneyland for the same day, which I would strongly recommend doing if you plan on dining here. In the past, we’ve seen lengthy lines to get in, and have been told that the wait would be 30 minutes to an hour. Note that some tables overlook the Central Plaza and Cinderella Castle, so you might try requesting one if the restaurant isn’t especially busy. (We forgot to make this request.) 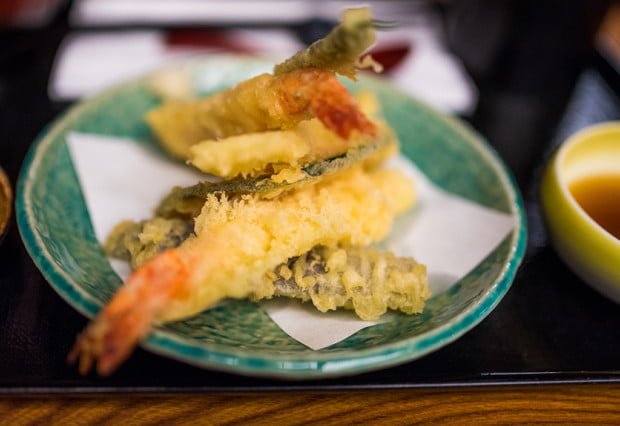 Overall, Restaurant Hokusai was definitely a strong meal, but we wouldn’t recommend it. That probably seems like a contradiction, but we swear it makes sense. (Maybe?) This is because you’ll probably be having only a few meals in the park, and those should be allocated to the locations with strong theming and good food. Restaurant Hokusai is a good place to try once you’ve visited Tokyo Disneyland several times–or if you’re really keen on Japanese cuisine. First timers should look elsewhere, though. 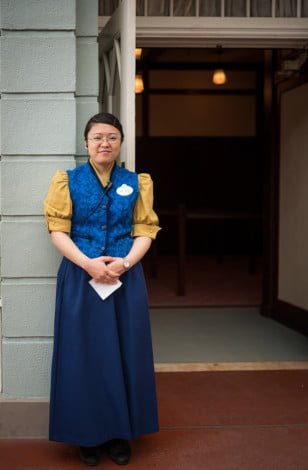 What do you think of Restaurant Hokusai? Have you dined here? Do you agree or disagree with our take? Share any questions, tips, or additional thoughts you have in the comments!