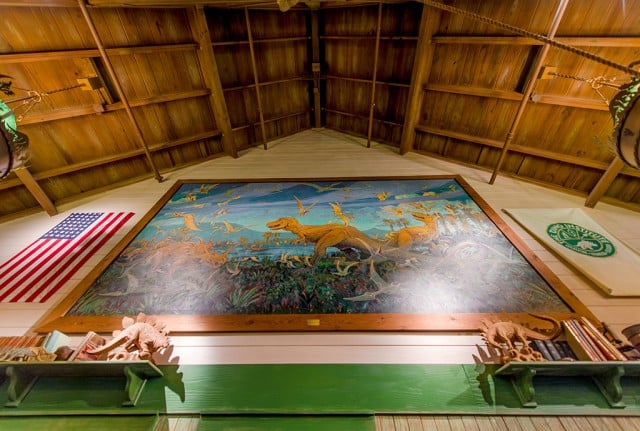 Restaurantosaurus is an intentionally kitschy dinosaur-themed restaurant (get the name?) in Walt Disney World’s Animal Kingdom. The menu is a mix of mostly standard American fast food, with no specific twist. It participates in the Disney Dining Plan and is a rare counter service restaurant that accepts Tables in Wonderland for a 20% discount. Due to the recent addition of two premium burgers (at least in price) it’s now an exceptional value on the 2018 Disney Dining Plan.

We all know that kitsch is fun. Everyone loves a good restaurant. It’s irrefutable scientific fact that dinosaurs are awesome. So it stands to reason that Restaurantosaurus would be a mind-blowing experience on many different levels. Yet, in reality, it’s awful. This may seem unexplainable, as mixing so much awesome together should simply result in more awesome. However, much like a Slim Jim-flavored ice cream sundae on a bed of BBQ ribs covered in melted cheese, something has gone horribly wrong.

Before we lambaste Restaurantosaurus for its terrible food, let’s look at what it has done right: theme. Restaurantosaurus is over-the-top, and unabashedly kitschy. Some people won’t like the intentional kitsch (with the argument that “organic kitsch” works best), but I think it works well. I’m not normally one to defend Dinoland for its “clever and layered backstory” (I’ve described it more than once on this blog as lipstick on a pig), but kitsch in small doses and not at the expense of substance works.

I don’t think it’s realistic to expect a counter service restaurant themed to dinosaurs to have the kind of high level quality an attraction would, so a small dose of kitsch is a good workaround for the restaurant. It gives something to explore and a way to tell story that doesn’t need to occur at the expense of substance. 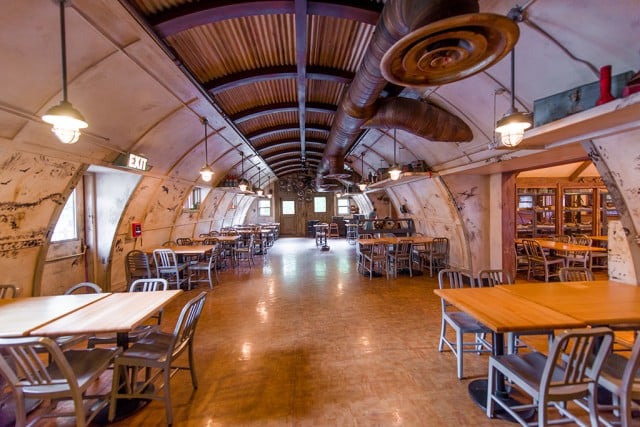 The many tacky details of Restaurantosaurus work because they are simply so over the top, and because the expectations aren’t the same for a counter service restaurant as they are for an attraction.

If the “dueling” storyline of Dinorama/Dino Institute had manifested itself in a land with beautiful Institute-based attractions in an immersive land with a companion sub-land on the fringe containing kitschy restaurants and gift shops that helped inform as to the overarching storyline, I don’t think anyone would be complaining. 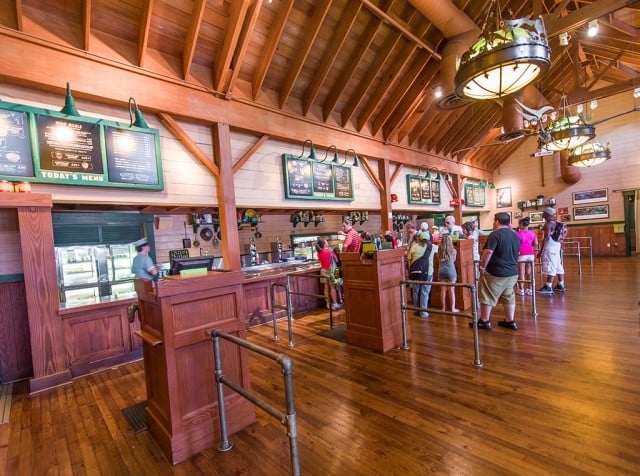 Instead of a land with substance and artistic merit, we got sub-par attractions and a thick layer of unnecessarily complicated story to explain away why the land is so terrible. 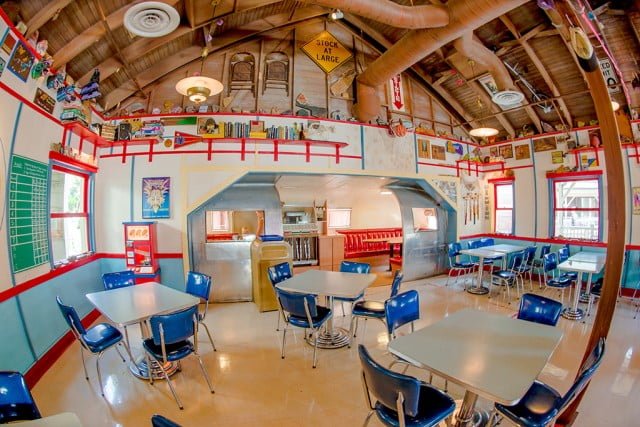 This is especially clear when going from room to room, and seeing how it’s all, more or less, a hodge-podge of randomness tied together even through random architecture and random music. But it’s only random in the sense that it seems to clash stylistically. 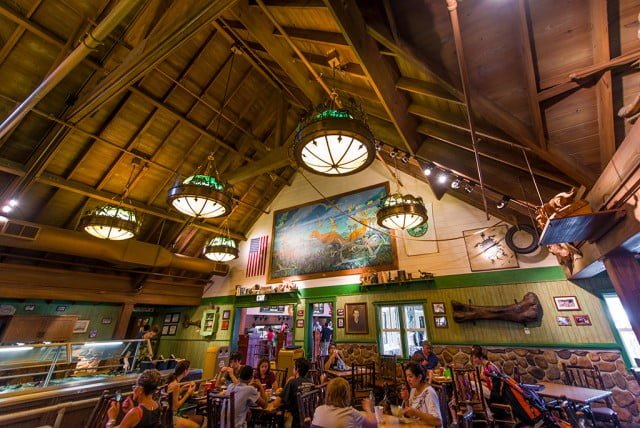 In execution, it somehow makes perfect sense. There are dinosaur puns and decor a-plenty, and the jokes and gags work on multiple levels.

Kids will enjoy the restaurant for its straightforward dinosaur-ness, and adults will appreciate the subtle (and sometimes not so subtle) humor. 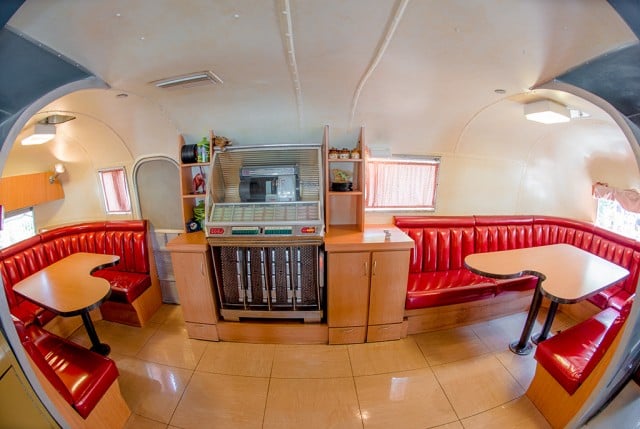 The intentionally kitschy style may not be for everyone, but dinosaur lovers and fans of this type of humor will enjoy it. 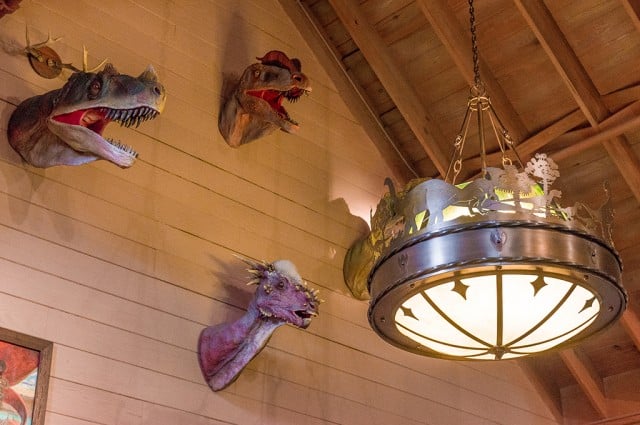 Now…the food. It’s awful. It also has a very limited menu. I don’t know whether this is a strength or weakness…depends on whether you’d rather have more or less bad items from which to choose? (Note: the menu here has changed since we last dined here–its “highlight” is now the Double 1/3 lb Angus Bacon Cheeseburger that is one of the most expensive entrees at Walt Disney World.)

A few of the items are plain versions of base menu items served all over the place, like the Angus Bacon Cheeseburger and the Chicken Nuggets. About the most inventive items are the BLT Salad and the Vegetable Subosaurus. 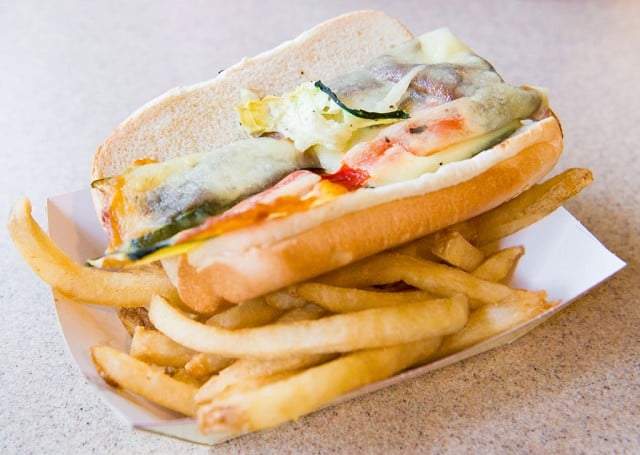 Since nothing else looked all that inspired (we originally visited Restaurantosaurus because they used to have a highly regarded Shrip Po’ Boy, which is no longer on the menu), I decided to go for the most unique item on the menu, the Vegetable Subosaurus. Calling this disgusting might actually be a little charitable. Since this $9+ sandwich (mine definitely wasn’t “sub” sized, it was just served on a roll shaped like a sub) didn’t have any meat, you think they’d compensate by not skimping on the vegetables, right? Nope.

There were few veggies on the sandwich when it arrived to me. This turned out to be a good thing, as the ones that were there tasted like they had been around since the Triassic Period, or possibly cooked on the pavement in Dinoland a few weeks beforehand. Luckily, there was a toppings bar, so I piled on veggies from there. Just the standards like shredded iceberg lettuce, but still better than whatever they found and threw in my “sub.” Even then, I only finished about half of it. I love to eat, so for me, this is rare. 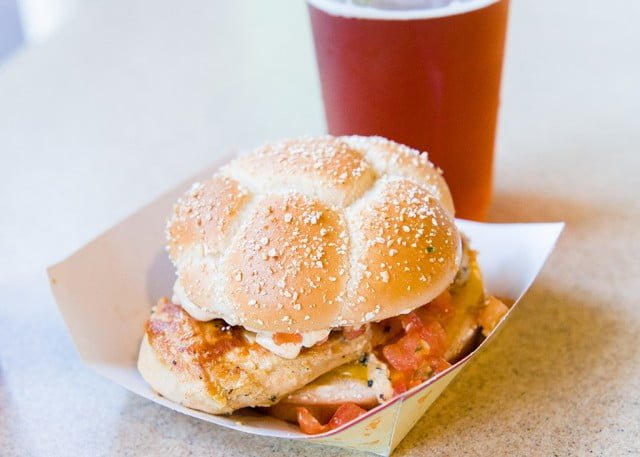 The sandwich was so bad that I actually considered going back up and ordering something else, but as I examined the trays around us, all of the other options seemed like stripped down versions of offerings elsewhere.

The standard Disney burger that is usually improved upon with other toppings as a signature choice elsewhere, a pretty plain BLT salad, chicken nuggets, and a mac & cheese hot dog (I didn’t see this anywhere, but there was no way on earth I was ordering it, anyway).

Sarah got the Grilled Chicken Sandwich, which was significantly better than my “sub,” but was still just a plain chicken sandwich. Not anything we’d highly recommend. 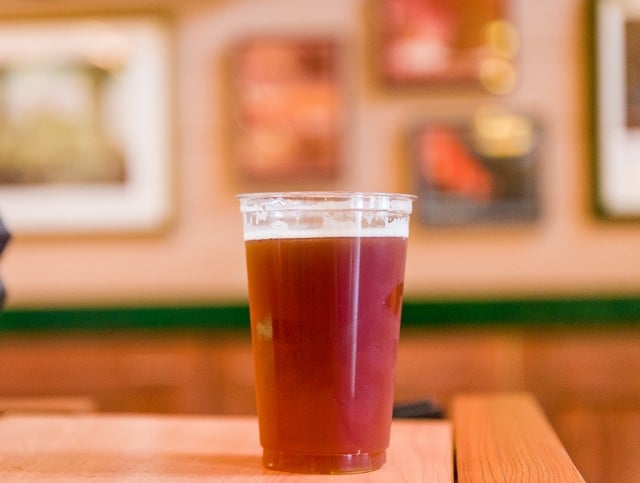 Restaurantosaurus also has a limited alcohol menu, but there’s nothing special on the menu. A couple sugary drinks and a couple of beer choices.

Pictured above is the Safari Amber brewed exclusively for Walt Disney World by AB/InBev; it’s okay, but nothing special. 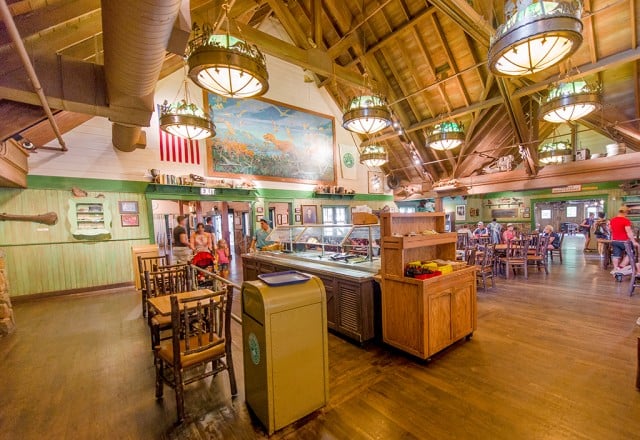 Overall, almost all of the points scored by Restaurantosaurus are due to what I find to be a clever theme. The only other pluses besides the theme are free drink refills and..uh…air conditioning? That’s all I’ve got. As far as food goes, no one in their right mind should eat here with the excellent Flame Tree BBQ and Satu’li Canteen in the same park. Even if you have picky eaters with you, there have to be better options than this. It’s restaurants like Restaurantosaurus that make no effort towards menu diversity that give Walt Disney World the reputation for having “only” generic theme park food. This is one of, if not the, worst restaurants in Walt Disney World.

Do you think we were too harsh on Restaurantosaurus? Do you disagree about the food? If you like it, which menu item is your favorite? If you agree with us, share what you’ve ordered here, or any of your other thoughts in the comments!