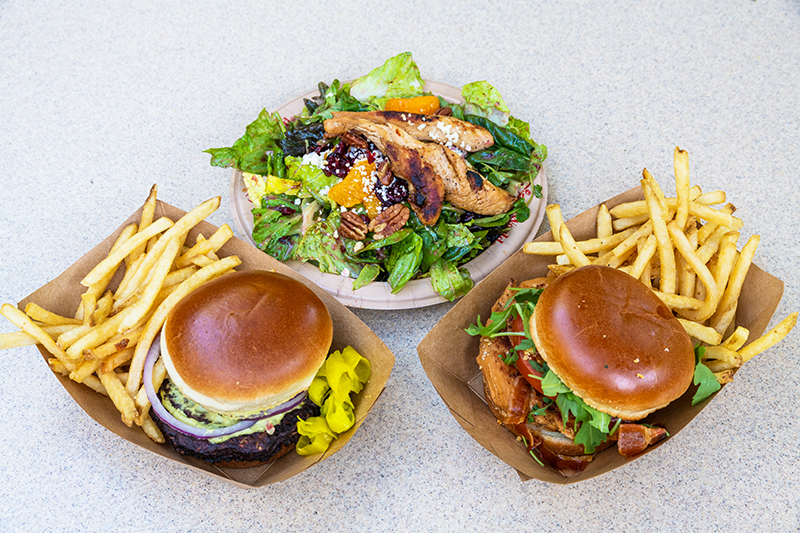 If Electric Umbrella isn’t the worst, what is? A reader asked this question on our Walt Disney World’s “Worst Restaurant” Is Not So Bad post. My stumbling answer listed a few possibilities, including Casey’s Corner, Lotus Blossom Cafe, and Restaurantosaurus. As I noted in my reply, the last one was my first instinct.

As we state in our full Restaurantosaurus Review, no one in their right mind should eat here with the excellent Flame Tree BBQ and Satu’li Canteen in the same park. Even if you have picky eaters with you, there have to be better options. It’s restaurants like this that give Walt Disney World dining a bad reputation, and Restaurantosaurus is one of, if not the, worst restaurants in Walt Disney World.

That pretty much says it all, but in fairness, it had been a while since we last dined at Restaurantosaurus (for reasons that should be obvious). Since we still had some bonus bucks left on a gift card after our adventures in dining at the “Mini Food & Wine Festival” at Animal Kingdom, we decided to head off to Dino-Rama to see what Restaurantosaurus is cooking up these days.

“Eager” to give Restaurantosaurus another chance and a fair shake, we opted to dine there over the wealth of other great options at Animal Kingdom. Actually, there was much consternation and debate about whether revisiting Restaurantosaurus was really necessary, or if literally every meal we’ve ever had there was evidence-enough of its terribleness.

Not one to miss out on an awful meal, we were joined by Josh of easyWDW.com, whose enthusiasm for skipping out on Flame Tree Barbecue in favor of Restaurantosaurus can charitably be described as “tepid.” However, this is the true roller coaster you sign up for when taking up Walt Disney World blogging. One moment you’re breathing the rarefied air at a new otter exhibit, the next you’re plummeting into Restaurantosaurus. So it goes. 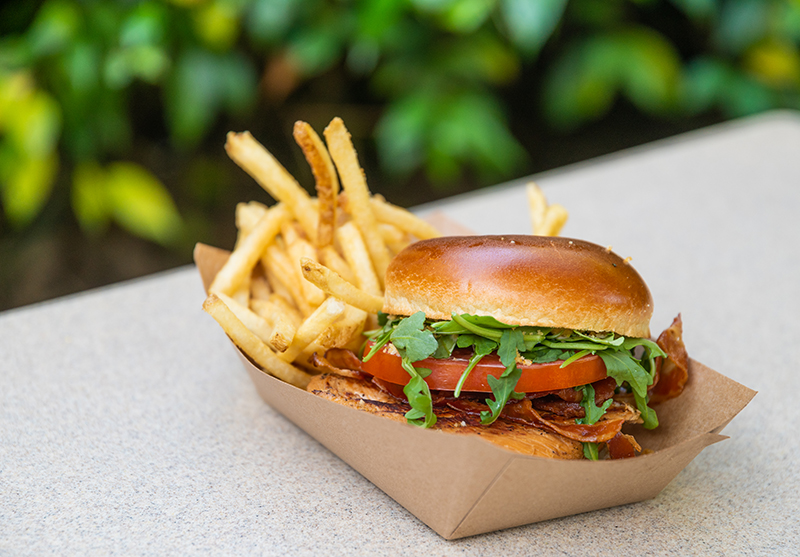 The description sounds modestly ambitious, but that’s a ruse. The predominant flavors here are dry chicken and dry bun. The bacon is of the rubber and paper-thin variety, and I couldn’t even taste the aioli and parmesan crumbles over the dryness of everything else.

After a few bites to fairly judge baseline flavor, I loaded up with mushrooms and onions from the toppings bar. At least the sandwich was fine and filling with those enhancements. 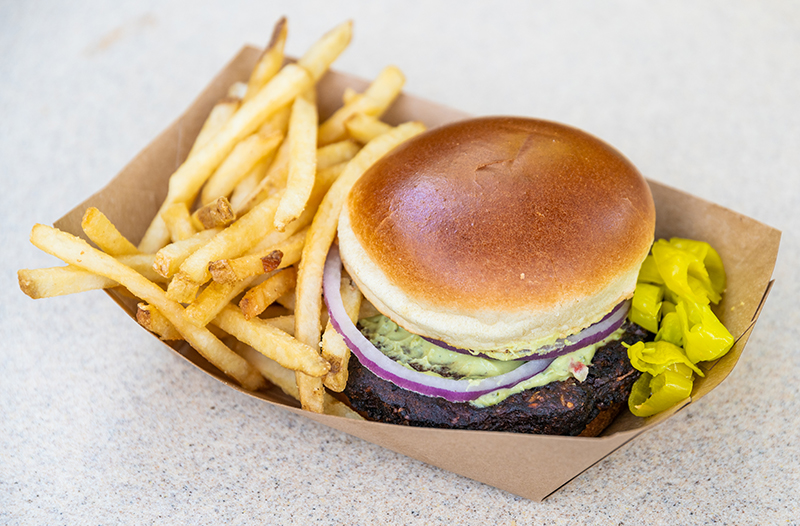 I was cautiously pessimistic about this. We’ve seen strides in vegetarian options around Walt Disney World, but I didn’t expect that to extend to Restaurantosaurus. No surprise–it didn’t. It was about what you’d expect in a black bean patty from the grocery store freezer section, and none of the base toppings did anything to improve upon that. 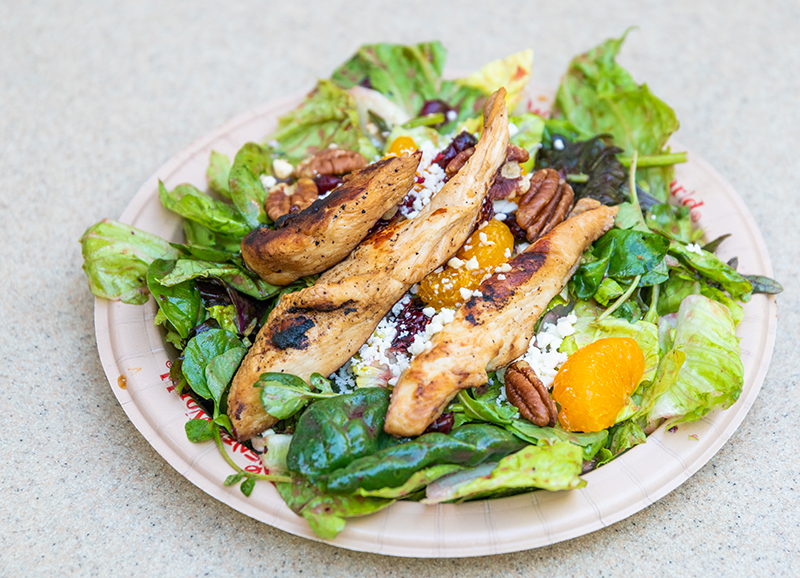 He seemed reasonably content with this, and I won’t question that as the salad itself looked fine. However, I think the photos convey the dryness of the chicken, saying everything else that needs to be said. 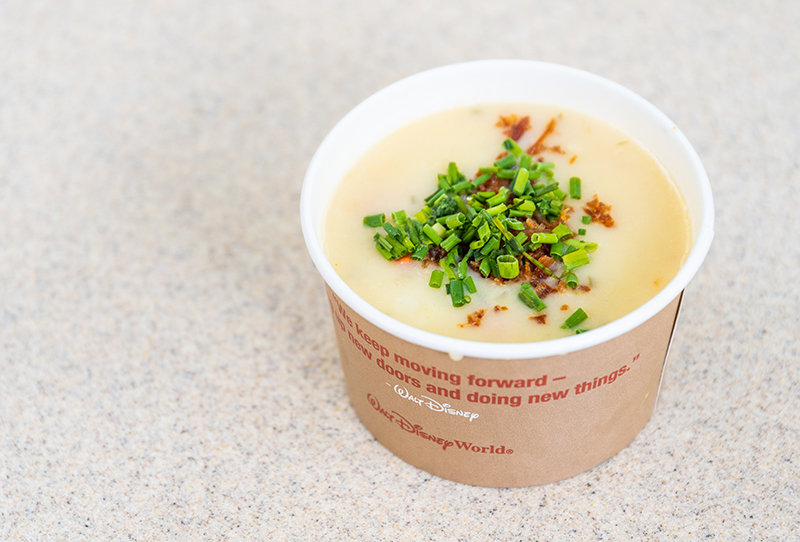 We also ordered the Potato Soup. It was easily the best thing we ate, but that’s still not saying much.

In addition to our “interesting” entrees, Restaurantosaurus also serves the standard Angus Burger (elsewhere around Walt Disney World, this dry patty is wisely masked with other toppings), chicken nuggets, and breaded shrimp.

All of those things are Walt Disney World counter service staples found on menus throughout the parks. Everywhere you go, they are exactly what you’d expect them to be, for better or worse. 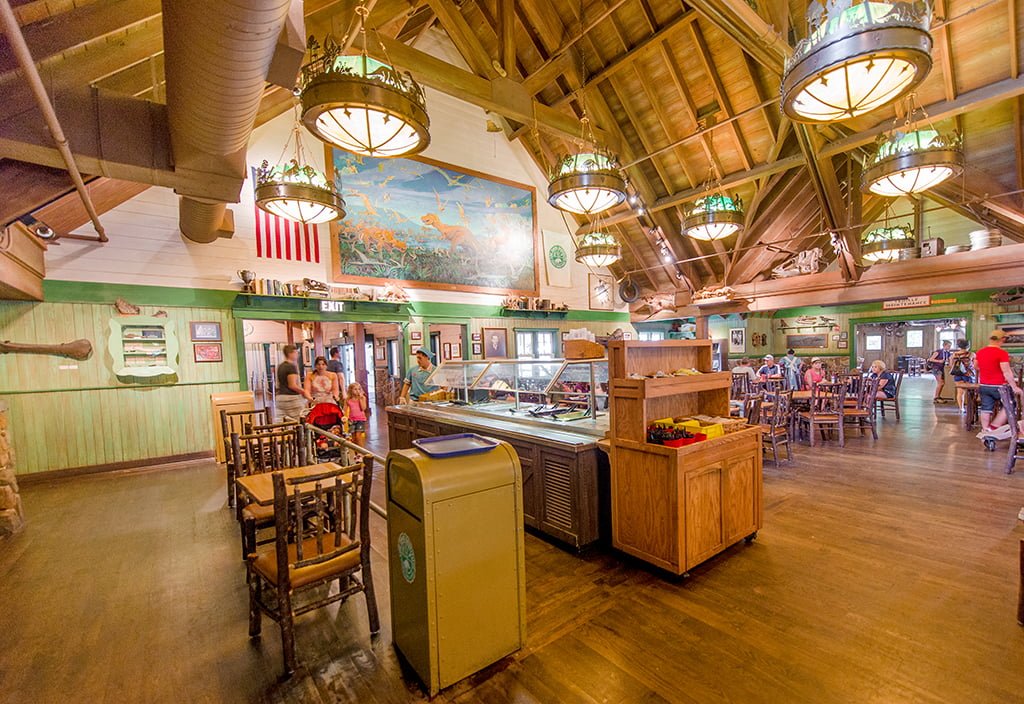 The reason there’s a question mark in the title is because I’m truly not sure which Walt Disney World restaurant is the worst. I do feel like making a definitive proclamation that Restaurantosaurus is the absolute worst restaurant at Walt Disney World would be hyperbolic. It’s simply not that clear-cut.

If I’m being fair, Restaurantosaurus has a few things going for it, including the free toppings bar. Piling anything high with toppings can mask even the worst sandwich, and improve the substance of a meal without increasing its cost. That’s huge, and one of the reasons why we like Cosmic Ray’s.

There’s also the drink refill station, plus the kitschy decor. While the latter will also be addressed in what Restaurantosaurus has going against it, this dining spot is the high point of Chester & Hester’s Dino-Rama. And of course, everyone loves free, unlimited caffeine on a long day at Walt Disney World. 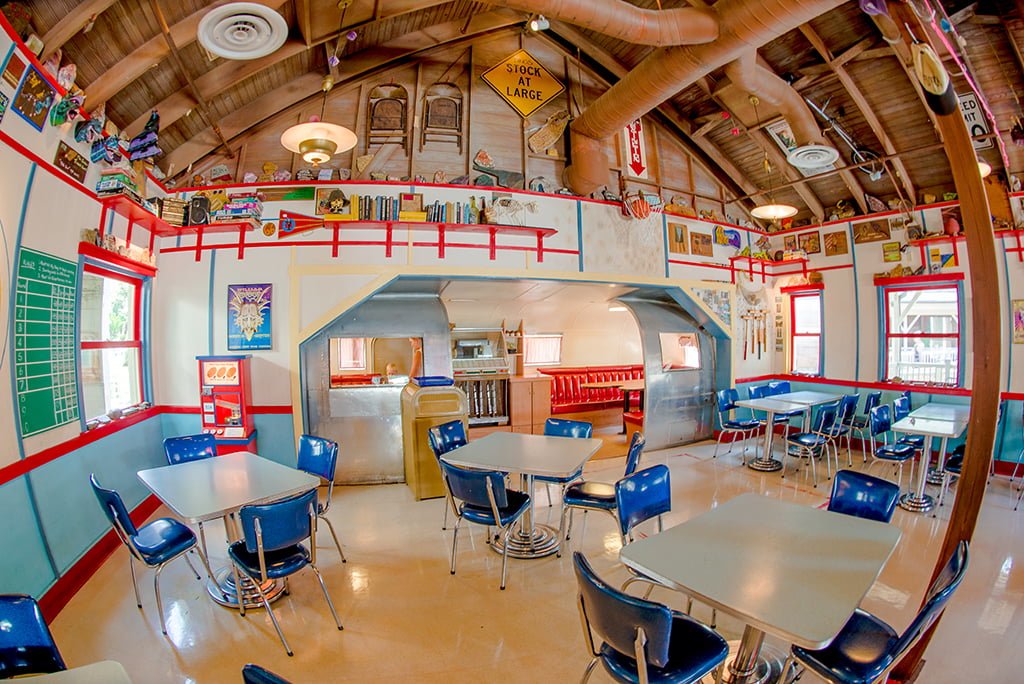 So what, potentially, makes Restaurantosaurus the worst? The menu is truly pathetic and has been for at least 5 years, so there’s that. It’s the epitome of stereotypical theme park fare, and virtually everything we’ve ever ordered there has tasted like it’s been dry-aged under a heat lamp for a duration best measured in days.

However, this same criticism could be levied at a handful of counter service restaurants at Walt Disney World. Every park has its “safe and bland” option, and these arguably serve an important purpose for fussy eaters or those beholden to their children’s palates.

Choosing a worst among those restaurants isn’t easy, but my tentative vote would go to Restaurantosaurus, even despite the toppings bar and decor. A big reason why is its quality relative to other dining options at Animal Kingdom. There’s an assumption that Walt Disney World’s best dining is in World Showcase, but for my money, the ‘most stacked’ counter service lineup is at Animal Kingdom.

Every restaurant is varying degrees of good or great…except for Restaurantosaurus. Relative to the other quick service options at Animal Kingdom, Restaurantosaurus is really bad. From a practical perspective, most visitors are only choosing among restaurants at the park they’re visiting. As such, that should be the key metric for evaluating dining. (We already grade Walt Disney World restaurants on a curve relative to other on-property options in terms of theme, quality, and price–extending that to individual parks is only logical.) 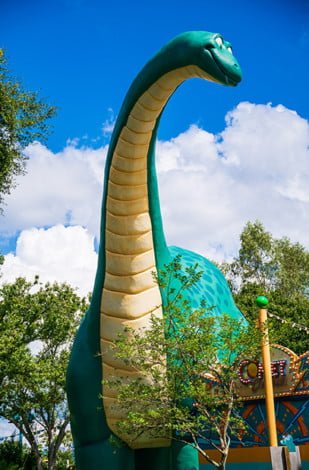 I’d go a step further and argue that even the fun and kitschy decor of Restaurantosaurus is a case of squandered potential. I’ve lambasted Chester & Hester’s Dino-Rama for its half-baked theme and dumpster fire design numerous times on this blog (most recently as a dishonorable mention in my Tom’s Top 7 Backstories at Walt Disney World), so I’ll spare you that.

Usually, when it comes to Dino-Rama and Dinoland, I go easier on Restaurantosaurus. In an area of unmitigated awfulness, it is the unequivocal highlight. However, it’s still not good, and a meticulously-themed dinosaur restaurant could be so, so much better. Dinosaurs are one of the greatest subject matters ever, and they don’t deserve the theme park treatment given to them thus far.

On balance, is all of this enough to tip the scales in the “favor” of Restaurantosaurus as the worst restaurant in all of Walt Disney World? I’m not sure. That toppings bar is really compelling, and the decor makes lemonade out of the lemons that are Dinoland and Dino-Rama’s theme. On thing I can say definitively is that this is the Walt Disney World restaurant we are least likely to (willingly) revisit. There are just too many excellent alternatives at Animal Kingdom to waste your time with Restaurantosaurus.

Are you a fan of Restaurantosaurus? Do you avoid it in favor of the superior options at Animal Kingdom, or is Restaurantosaurus a guilty pleasure for you? Or is it simply the most crowd-pleasing option for your family? Do you agree or disagree with our assessment? Any questions we can help you answer? Hearing your feedback–even when you disagree with us–is both interesting to us and helpful to other readers, so please share your thoughts below in the comments!