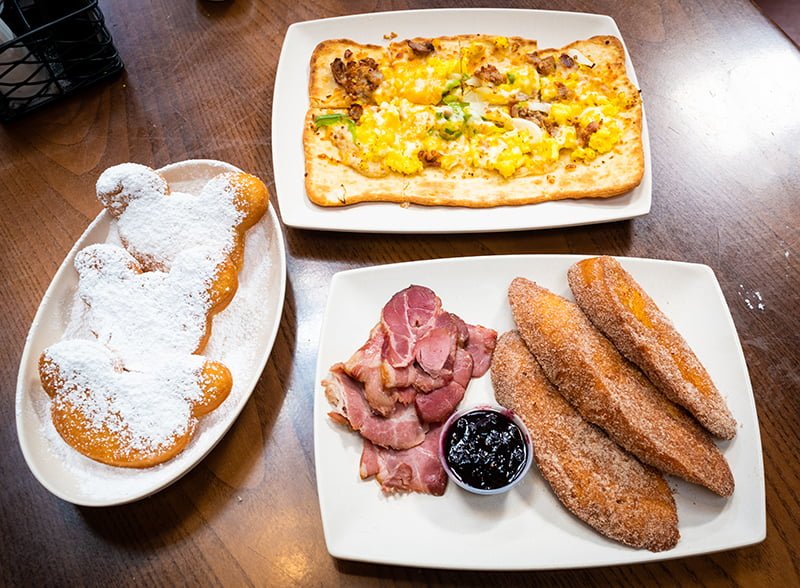 Sassagoula Floatworks and Food Factory is the counter service restaurant at Port Orleans French Quarter, and the go-to spot at Walt Disney World for beignets. This post reviews our breakfast here, with menu & food photos, thoughts on the experience, and whether it’s worth your time to dine here before heading off to the theme parks.

We previously reviewed the lunch and dinner menus at Sassagoula Floatworks and Food Factory, but this is our first time for the current breakfast options. The same basic info about the restaurant applies here: it participates in the Disney Dining Plan as a 1-credit counter service restaurant, and also accepts the Tables in Wonderland card for a 20% discount, which is rare for a counter service restaurant.

As Port Orleans French Quarter does not have a full-time table service restaurant (hence it accepting Tables in Wonderland), Sassagoula Floatworks and Food Factory is your only option for breakfast at this resort most of the year. The good news is that it’s a pretty good option as far as breakfast at Walt Disney World goes, with a line-up of intriguing options that potentially make it worth revisiting a few different mornings of your vacation…

Since our lunch and dinner review, Sassagoula Floatworks & Food Factory has changed up its seating after. It’s still themed as a storage area for a Mardi Gras parade with float props on display, along with posters and other details that give it a light Mardi Gras vibe.

However, that has been dramatically scaled back as compared to what used to be on display. Gone are the creepy oversized heads, and gone too are other less-creepy things like crowns, garland, giant ice cream cones, and other whimsical touches. Gone is pretty much everything, with bare rafters overhead. Details remain around the outer edge, but it looks bland.

I know what some of you might be thinking: he complained before that it was creepy, Disney “fixes” that and he complains that it’s bland. That’s one perspective, but here would be mine: why can’t Disney find the happy medium between over-the-top 1990s designs and bland contemporary styles?

It’s the same thing we’re seeing play out with hotel rooms around Walt Disney World. The previous styles were stuck in the 90s, and the new looks are dull and interchangeable with a Hampton Inn. It’s not hypocritical to dislike both approaches, as it’s not a matter of one or the other. There is a middle ground of “tastefully themed.” 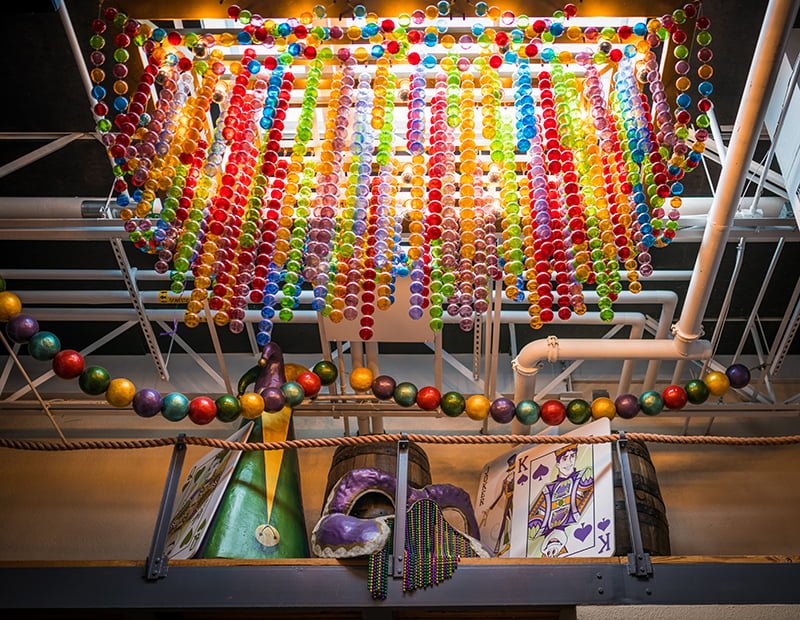 To be sure, some details remain at Sassagoula Floatworks & Food Factory. Not enough to convey what, exactly, this is supposed to be, though. Instead, it now comes across as dining inside an empty warehouse. I’m guessing most Walt Disney World guests don’t shout, “I’m going to Disney World…to eat in an empty warehouse!”

Gone are the charming touches that gave the space character and an interesting theme. Oh well, I suppose. Maybe they’ll get it right come the next re-imagining a decade or two from now.

Moving along to our breakfast… 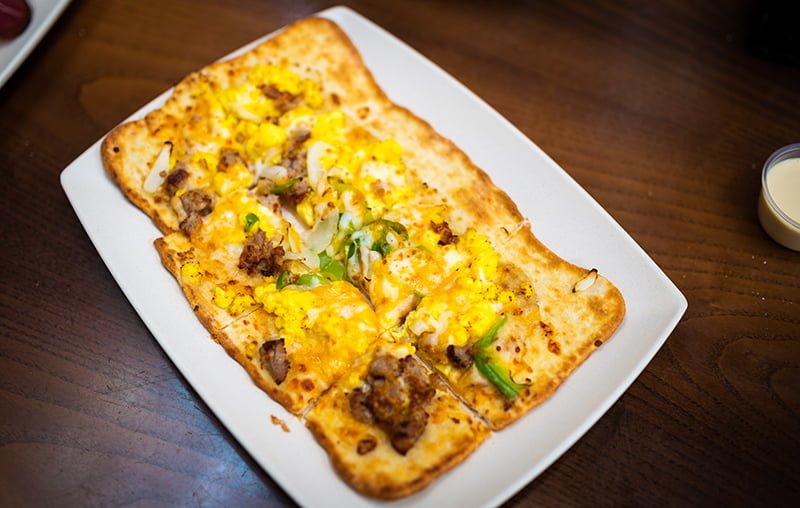 This was a mixed bag. The toppings only covered about half the surface of the flatbread, and the pre-made crust is nothing special (certainly nothing you’d want to eat on its own). However, the half with toppings was really good–a mild spice from the sausage and peppers that worked well with the eggs. Sarah wisely asked for the aoili on the side, which I dipped into the toppings-less crust–it was not good. 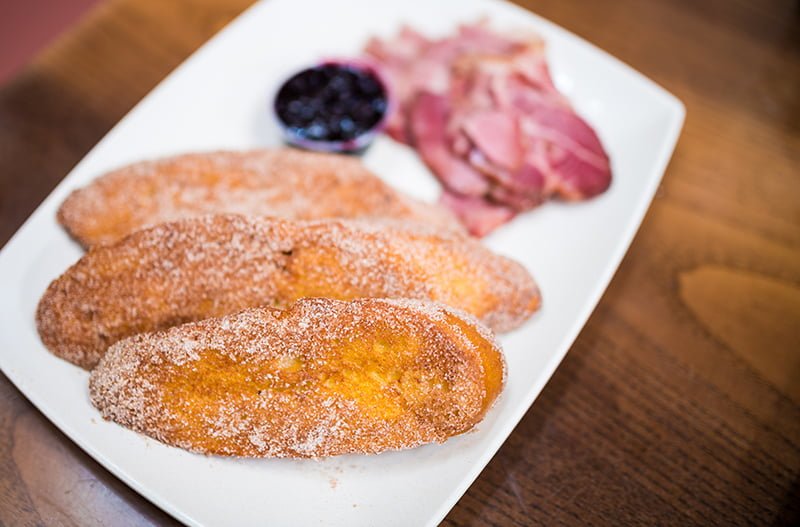 I was skeptical that I might be getting nothing more than day-old baguettes, deep fried to conceal their staleness, but this French Toast was shockingly good. A bit too much powdered sugar for me (especially after having a few beignets), but very tasty. I ordered it with the ham, which added a bit more sustenance and nutritional value, and I think it made a great, decadent breakfast. Probably not my healthiest moment, but we did end up walking like 14 miles this day. 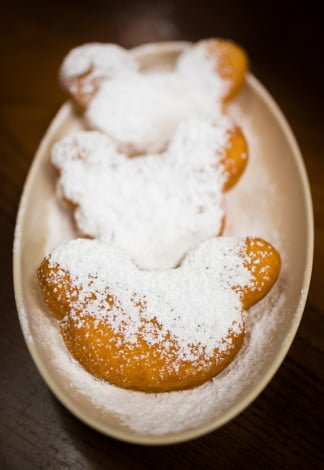 We also ordered the Mickey Beignets, because I hadn’t had my fill of sugary breakfast breads.

These were excellent. The food court was busy so we got a freshly-made batch, and they were absolutely perfect. An ideal balance of doughiness and airiness, with exceptional flavor and a generous dusting of sugar.

There was a lot on the breakfast menu at Sassagoula Floatworks and Food Factory that we didn’t have a chance to try, but that looked good–here are a few of the other options as depicted on the menu boards at Port Orleans French Quarter: 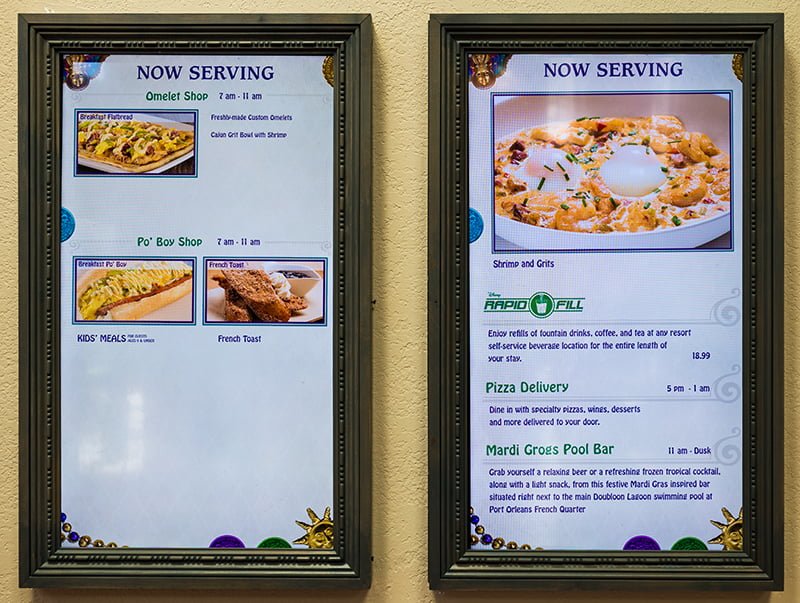 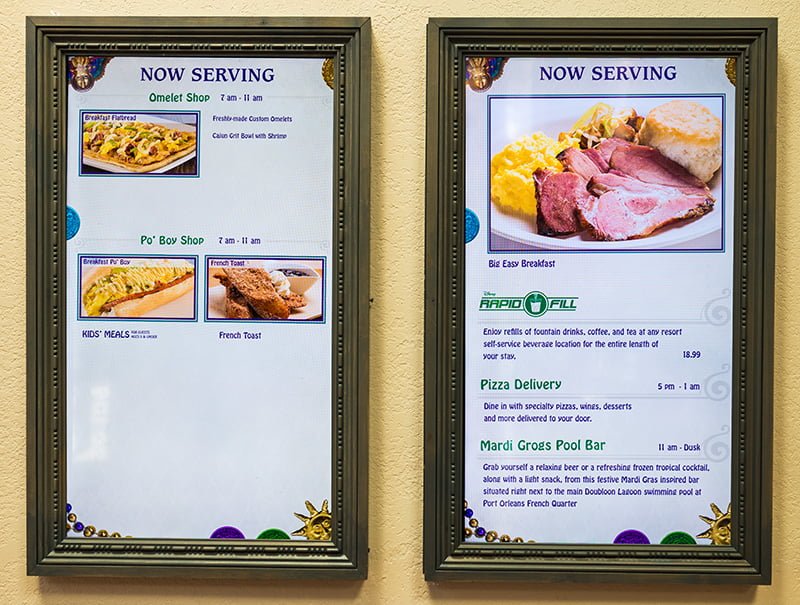 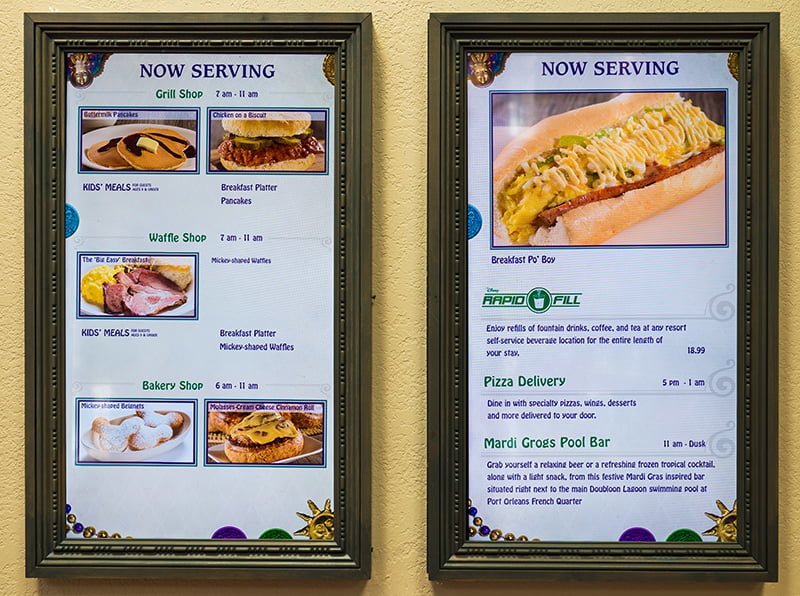 A few things that caught my eye from these menus: Cajun Grit Bowl with Shrimp, Breakfast Po’Boy (although I’m not sure about that aoili now), Grilled Steak and Scrambled Eggs, Crispy Fried Chicken on a Biscuit, and Wolferman’s English Muffin Breakfast Sandwich. Phew, that’s a lot of different things. (Now, if you will all just do me the favor of making this review really popular, so I can say to Sarah, “see, it’s our duty to eat breakfast at the food court instead of fruit and cereal in the room–we owe it to the internet!!!”)

Overall, our breakfast at Sassagoula Floatworks and Food Factory was good, and there are plenty of other ambitious and unique items on the menu that make me eager to return–and willing to offer a recommendation of checking it out. It’s certainly worth the time and money if you’re staying at French Quarter. While I wouldn’t make a special trip here if you’re staying at a Value or Deluxe Resort, it’s an interesting-enough menu that I’d consider walking over from Riverside if you’re curious.

Have you done breakfast at Port Orleans French Quarter? What do you think of the toned-down style of Sassagoula Floatworks and Food Factory? Do you agree or disagree with our take on the re-imaginings around Walt Disney World hotels of late? Any questions we can help you answer? Hearing your feedback–even when you disagree with us–is both interesting to us and helpful to other readers, so please share your thoughts below in the comments!