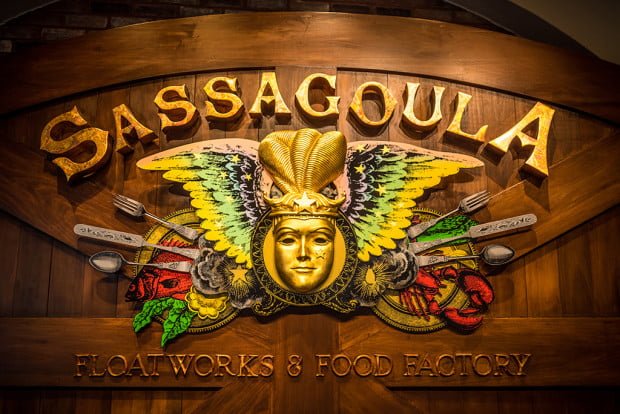 Sassagoula Floatworks & Food Factory is the food court at Port Orleans French Quarter Resort in Walt Disney World. This review has food photos, thoughts on the cuisine, and a general look around this “interesting” counter service spot that serves a menu of American and Cajun-inspired food. In terms of money-saving info, it participates in the Disney Dining Plan as a 1-credit counter service restaurant, and also accepts the Tables in Wonderland card for a 20% discount, which is rare for a counter service restaurant, so take advantage!

In terms of food, Sassagoula Floatworks continues what we’ve seen as a recent trend in food courts at Walt Disney World, and that’s the offering of greater variety, and higher quality options. For a while, food courts at the Value and Moderate resorts were high on stereotypical theme park cuisine, but that’s no longer the case. To be sure, basics like pizza and burgers are still present to satisfy picky eaters, but we’ve noticed more ambitious options in the last couple of years. Kudos to Disney on this.

In terms of the ambiance of the Sassagoula Food Court, well…it’s “interesting” as I said above. Those air quotes don’t quite do it justice… 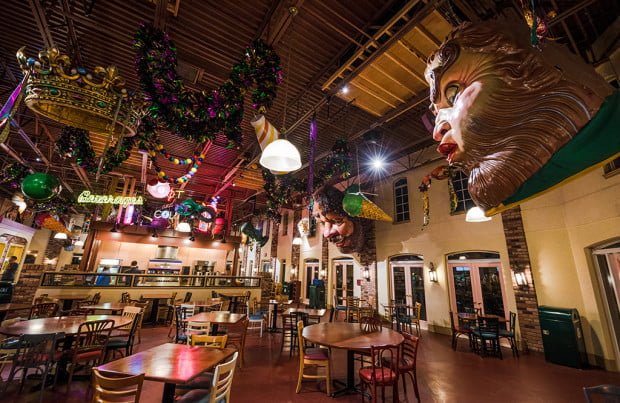 On paper, the theme of Sassagoula Floatworks & Food Factory makes perfect sense. It’s a storage area for a Mardi Gras parade, and the props on display here are spot-on for what you’d see in the real Mardi Gras parade in New Orleans. In fact, some items are dead ringers for real parade floats.

The potential problem (if you want to view it as such) is the source material itself. The Mardi Gras parade is straight up crazy. It works in the inebriated state of Mardi Gras because that’s part and parcel of the culture. The Krewes and crowds there have the context of the celebration as a backdrop, and understand the silly and (sometimes) satirical nature of the parade and its floats. Much like seeing a giant praying mantis vehicle driving through the desert during Burning Man, these jovial and crazy decorations just work in New Orleans during Mardi Gras.

This particular fella is the perfect mix of jolly and disturbing, so I felt compelled to learn how to create a GIF (greetings from 1999!) in order to adequately convey how he looms over the food court. He is like a mix of Friar Tuck and Roz. Friar Roz, if you will. “I’m watching you, tourists…always watching…” 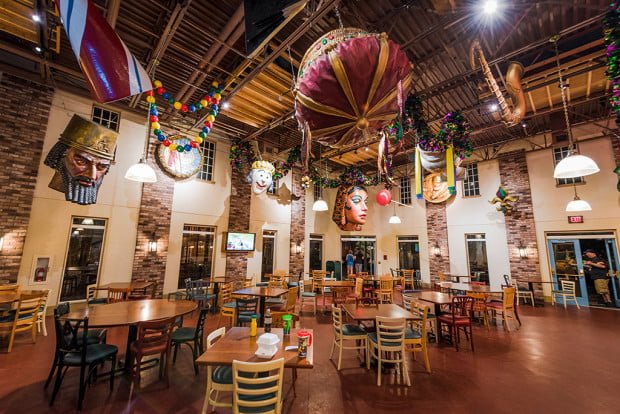 Now, I said potential problem above because whether this works in Walt Disney World is all a matter of perspective. On the one hand, giant faces gazing down on you while eating are a tad bit creepy. On the other hand, there is a certain charming weirdness to it all. In a way, it’s sort of like Maelstrom: the Food Court.

I’ve come to the conclusion that here, weird is good. Many things at Walt Disney World are done with such meticulous efforts to ensure they are like heightened, idealized interpretations of reality. This is not one of those things, instead embracing the oddities present in the real Mardi Gras parade. It makes for a nice refrain from the norm. I think the theme of the food court is good fun, and it’s nice that it doesn’t take itself so seriously. 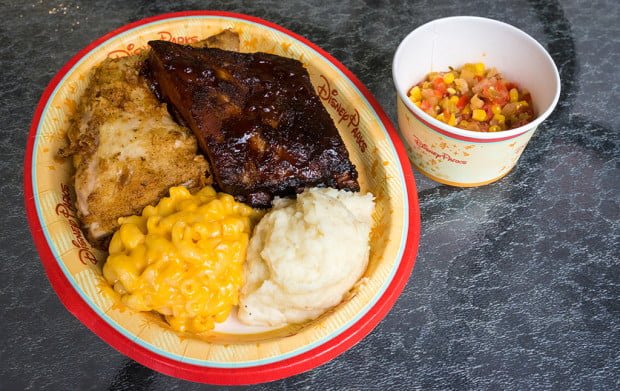 Here’s the Fried Chicken & Ribs Combo, which comes with cornbread and two sides. When I ordered this, my server allowed me to choose any 3 sides, but your mileage may vary on that one.

This combo is roughly $4 more expensive than the dedicated chicken or ribs entrees, and in seeing others’ portions on the dedicated entree, I would highly recommend purchasing one of those if paying out of pocket. My order appeared to simply be a half order of chicken plus a half order of ribs. If you’re on the Disney Dining Plan, this combo is better bang for your buck, but it’s still about the same amount of food as the cheaper option, so that “better bang for your buck” is only in theory. 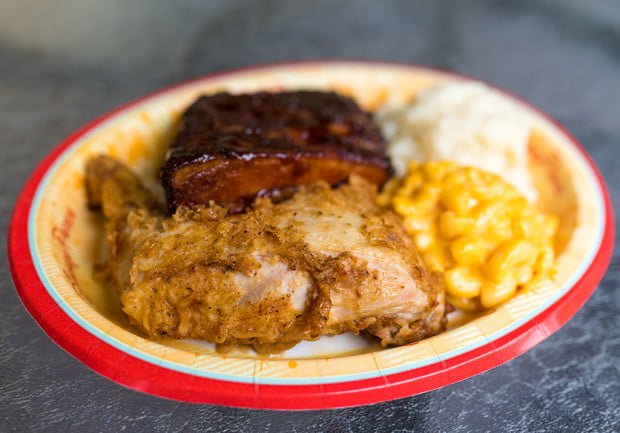 The good news is that the food was excellent. The fried chicken was juicy and tender, with a very thin layer of breading that skewed towards the soggy side of the soggy to crunchy scale. 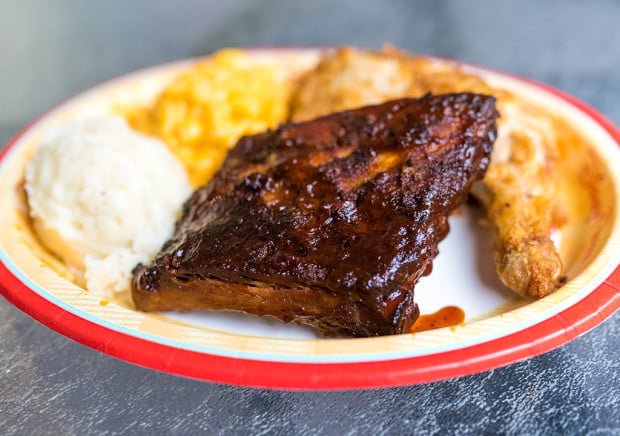 My order of ribs was pretty small, but very good. In fairness, “bad” and “order of ribs” are words that I very rarely place in the same sentence; these weren’t as good as the ribs at Flame Tree BBQ, but the meat here was tender and well-prepared. I would order either the chicken or the ribs again as individual entrees.

The sides of mashed potatoes and mac & cheese were likewise pretty tasty, making this a solid “comfort food” meal that would probably be large enough to some people to split. 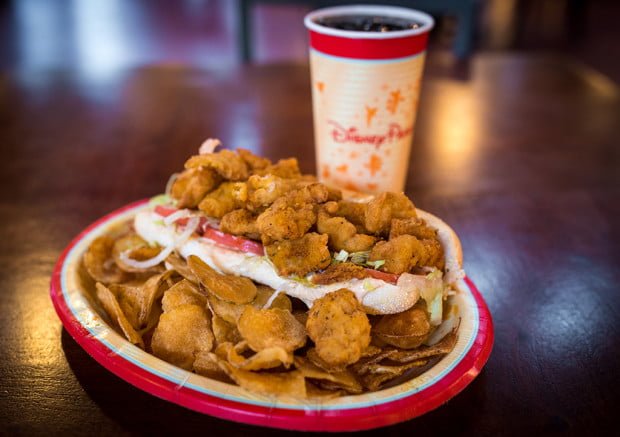 For another meal, I decided to order the Shrimp Po’ Boy with housemade chips. 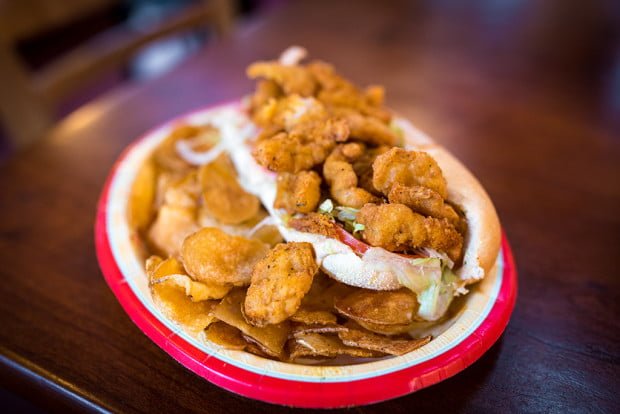 This sandwich was literally overflowing with shrimp, and was a pretty sizable portion. The breading on the shrimp was a bit heavy-handed, but the light seasoning and crunch of the breading gave the sandwich a great flavor.

I ended up eating about half of the shrimp with a fork (who am I kidding…I picked them up with my hands and ate them like a barbarian), which should be a pretty good testament to the size of this sandwich. 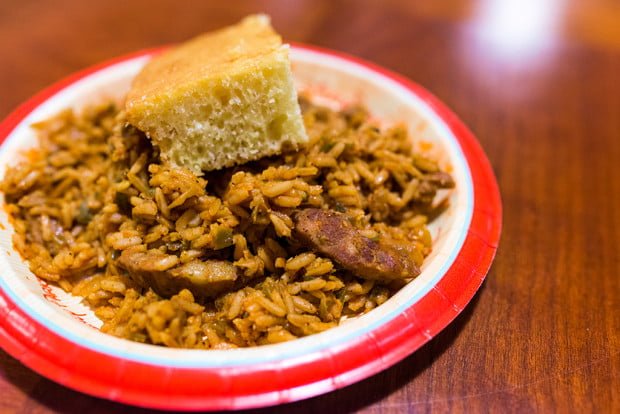 For another meal, I had the Jambalaya with cornbread. Given that Walt Disney World restaurants typically strive for mass appeal rather than strict authenticity, I was expecting this to be really mild. It had surprising oomph to it (although still probably not authentic creole), and I was pleasantly surprised by the flavor of the slightly spicy cajun seasoning blend.

It was still sufficiently mild that I suspect most people could handle it just fine, but it’s probably not for picky eaters. I would choose the fried chicken, ribs, or po’ boy over this, but in no way was I disappointed.

I’ve also had the Muffuletta (albeit at Riverside Mill, next door) and the beignets here, and the only disappointment I’ve ever had at Sassagoula Floatworks & Food Factory is with the latter. These beignets are probably the item for which this food court is best known, and I was unimpressed. They are not even on par with the excellent Mickey Beignets served in New Orleans Square, much less the famed ones at Cafe du Monde.

In fact, I’m not even sure they are technically real beignets. It’s nice that they are freshly prepared, and you can never really go wrong with dough covered in powdered sugar, so they are worth giving a shot to judge for yourself, but I expected more. Perhaps my expectations were too high given all of the hype? I’m sure I’m in the minority with that opinion, but consider it fair warning. 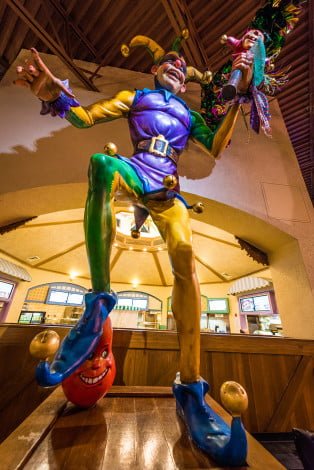 Overall, I am a fan of Sassagoula Floatworks & Food Factory, and would put it just a rung below the best food courts at Walt Disney World. Sure, the kitschy decor isn’t going to be for everyone and may scare small children, but if you can’t terrorize your kids on vacation, what’s the point of even going? The decor is fun, and there’s something for everyone on the menu, with everything from basic theme park fare to well-prepared comfort food to good Americanized Creole choices. I wouldn’t say anything here is mind-blowing or something you’ll crave after your trip, but the unique items here are worthwhile. I’ve dined both here and at Riverside Mill at Port Orleans Riverside a lot, and while I enjoy both, I would give the clear edge to Sassagoula Floatworks, and recommend those staying at both hotels to give it a try.

If you have dined at Sassagoula Floatworks & Food Court? Did the giant heads watching you eat give you nightmares? Do you agree or disagree with my assessment of the food? We love hearing from you readers, so share your tips, thoughts, or questions in the comments!