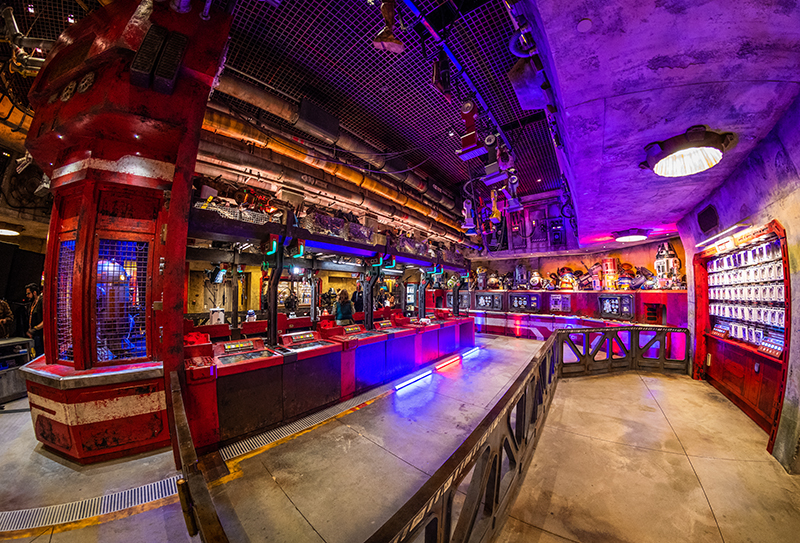 Droid Depot is a build your own droid shop in Star Wars: Galaxy’s Edge at Hollywood Studios in Walt Disney World and at Disneyland. In this review, we’ll detail the experience, whether it’s worth the money, and how it compares to even pricier lightsaber experience in Star Wars Land. (Updated October 11, 2022.)

As a bit of background, Droid Depot is a split retail space, with one half of the store having normal off-the-shelf Star Wars items you can buy (including the Batuuan Spira Credit Medallion, one of the best kept secrets in Star Wars: Galaxy’s Edge), while the other half is a workshop with stations for droid customization and purchase.

Droid Depot’s building area is stocked with parts, chips, manuals guests can collect to customize, construct–and purchase, of course!–droids. After you’re done, you can take the droid you’ve built to explore the rest of Black Spire Outpost and Batuu, even ‘test-driving’ them in the droid playground 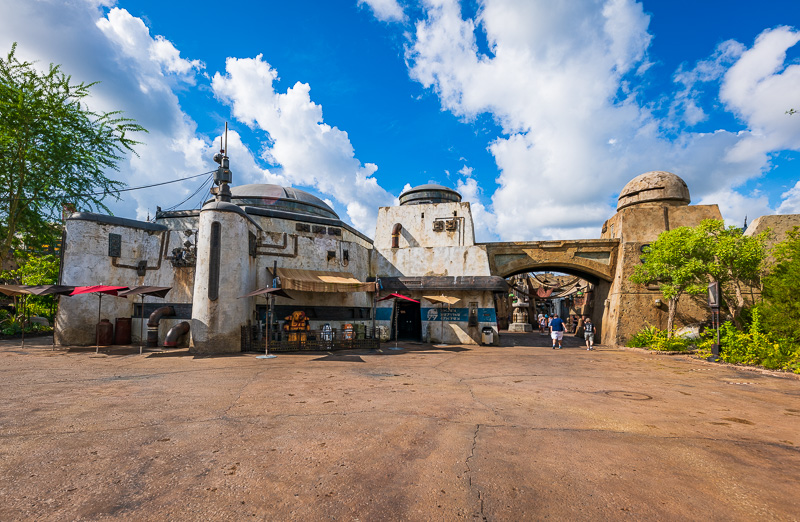 October 11, 2022 Update: Disney has increased the price of the build your own droid experience in Black Spire Outpost, from $99 to $119.99 per astromech droid, plus tax. This is the first time the cost has gone up since the opening of Droid Depot.

This follows two price increases at Savi’s Workshop for Handbuilt Lightsabers, with the cost of that moving from $200 at opening to $250 currently. Despite the differential, Savi’s Workshop remains much more popular than Droid Depot. In fairness, the lightsaber building workshop has a much lower capacity, which contributes to making reservations more difficult to score. 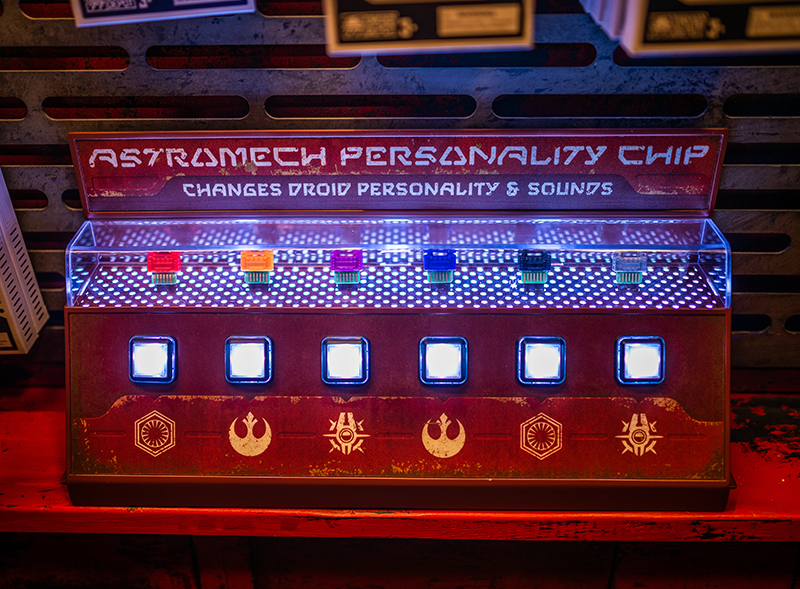 After choosing a BB-series unit or R-series unit, you’re given a basket and blueprint for parts. From there, you head to the parts station at the back of Droid Depot, which is literally a conveyor belt from which you pull items as they pass by. This is cool, and gives Droid Depot a certain authenticity. Plus, it’s fun to see and snag pieces as they pass you.

From there, it’s on to the build station, where you take the four parts (dome, connection plate, body sphere, and motivator for the BB-series or dome, body, and two sets of legs for the R-series) to follow placemat instructions. Assemble the droid its the proper sequence before the activation process begins. 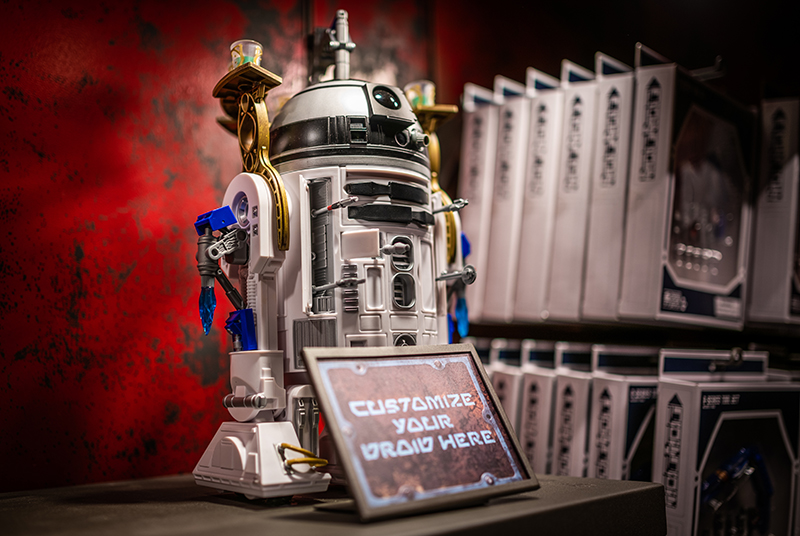 Constructing your own customized droid at this incredible industrial workshop in Star Wars: Galaxy’s Edge is pretty simple and quick. All told, the full Droid Depot experience takes under 15 minutes from start to finish (plus whatever time you have to wait in line to start building a droid, if any).

Once finished, you can buy additional accessories, including a personality chip or carrying backpack. If you want your droid to interact with elements in Star Wars: Galaxy’s Edge or other droids guests have built, the backpack is your best option. 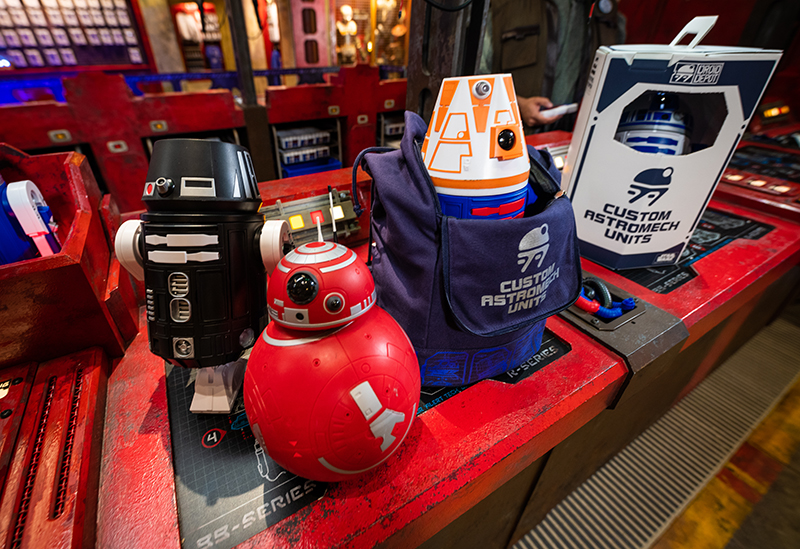 It seems awkward to just carry them around, so I guess the other option is getting one of those baby slings.

Joking aside, it’s amusing to hear the droids beeping at one another on occasion as you wander Black Spire Outpost. 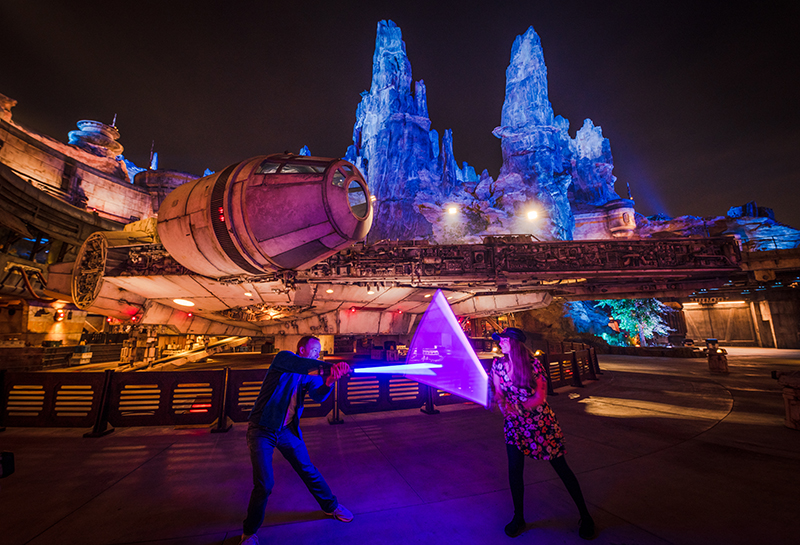 I think it’s worth discussing how Droid Depot compares with the $250 Handbuilt Lightsaber Experience at Savi’s Workshop, which we lavished with praise. While Star Wars Land has numerous shops and retail stalls, these are the two with a ‘pay-to-play’ show component. The rest can be enjoyed in full without spending a dime.

Quite simply, I don’t think Droid Depot stacks up to Savi’s Workshop in the least. Unless you really want one of these droids, you’re absolutely better off doing Savi’s Workshop–even though it’s double the cost. It’s a next level experience; Droid Depot is cool, but not on that level. 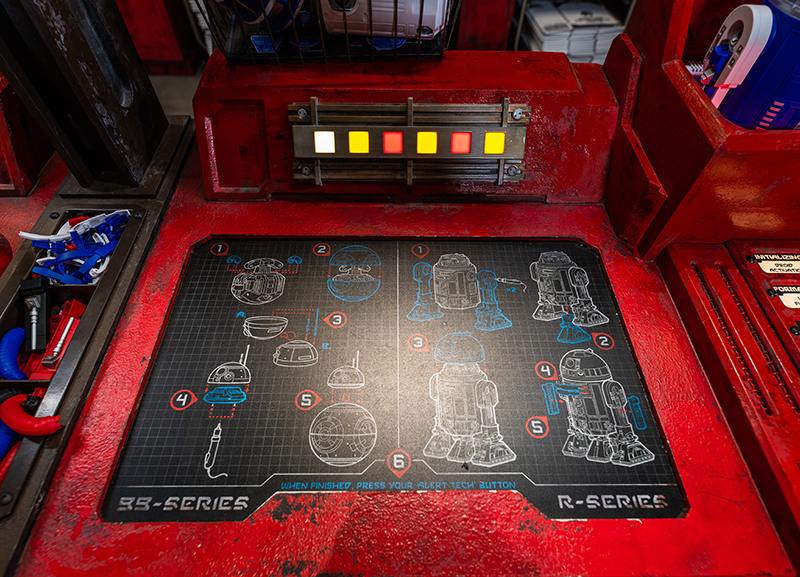 Don’t get me wrong, building an R2 unit at Droid Depot was neat, and the finished droids are cute and fun. However, there’s no emotional resonance to it.

Savi’s Workshop is this communal experience of creating something by hand. Savi’s has a strong show component that’s steeped in lore, tradition, and makes you feel connected to something bigger. Yeah, it’s theme park retail, but it’s nonetheless powerful stuff. 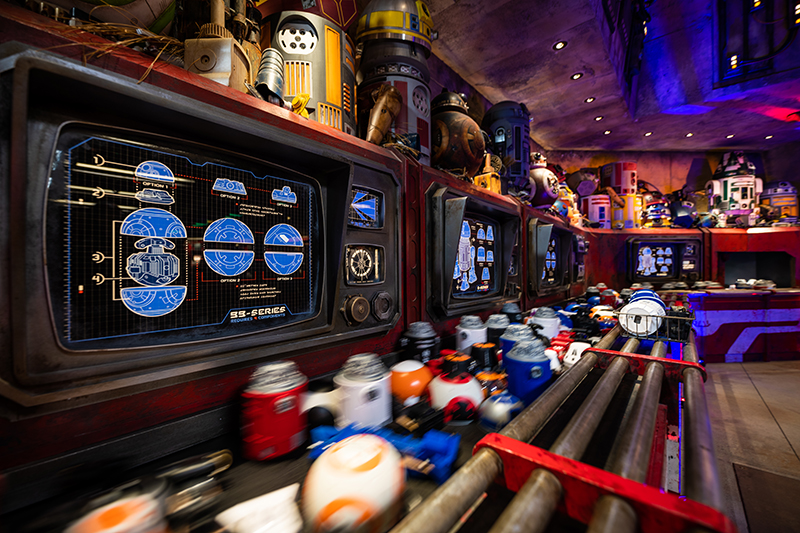 By contrast, Droid Depot feels almost like the anthesis of that. The setting is cool (as is literally everywhere in Star Wars: Galaxy’s Edge), but also vaguely reminiscent of an automobile assembly plant.

As you grab parts from the conveyor built and take them to your workstation, there’s a certain coldness to the experience. 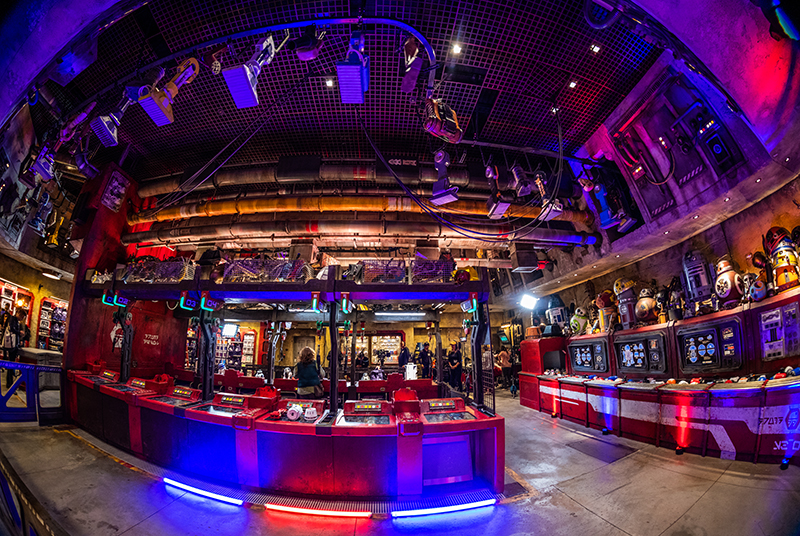 The setting is also loud and discordant, with a flow of guests waiting in line, entering, and leaving their own workstations. The creation process is interactive and engaging, but it’s about as communal as an assembly line, and there’s no show component that’s comparable to Savi’s.

Whereas the lightsaber experience makes you feel connected to something bigger, Droid Depot is essentially disconnected. 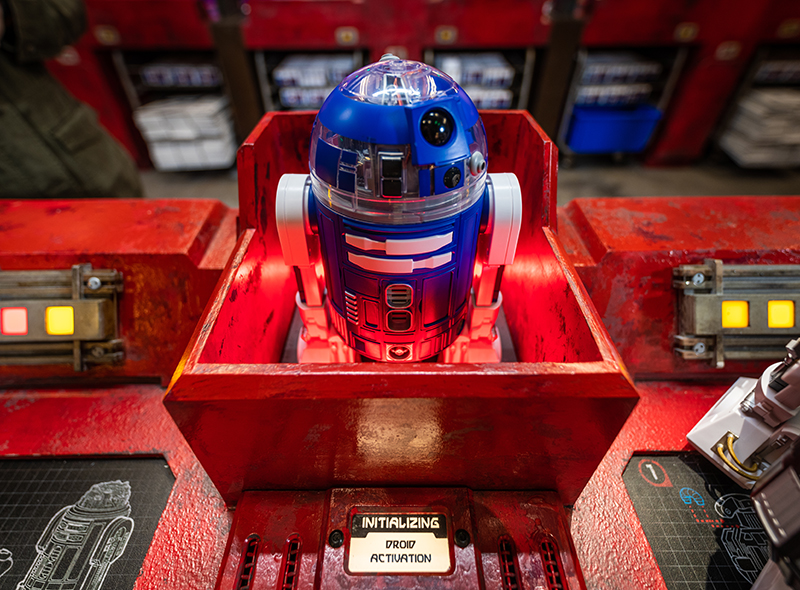 The one exception to this is when the droid is first placed into its activation slot, paired with a remote, and powered up for the first time.

There’s a flurry of blinking lights and sounds, and you witness the droid come alive. Arguably, the coldness of the first half of the experience is such a sharp contrast with this moment that it makes the droid “being born” more poignant. 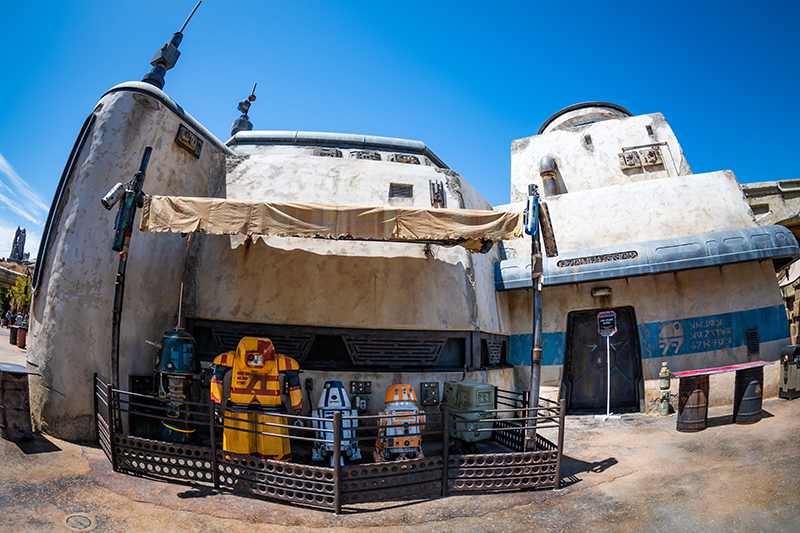 In the end, that moment was fleeting, and the overall Droid Depot experience didn’t really stick with me. It’s easy enough to peek into the custom droid building side of the shop and see what it’s all about, and I think that’s a sufficient version of this ‘experience’ if you don’t want to drop $120 on a droid.

Worth noting here is that while I built my own droid, I did Droid Depot as part of the media event and was unable to keep my finished droid. Perhaps I’d feel differently if I had an ’emotional bond’ with my creation and had to care and provide for the droid once I got it home. I’m guessing not, as I don’t really feel a bond with the lightsaber I bought and built. 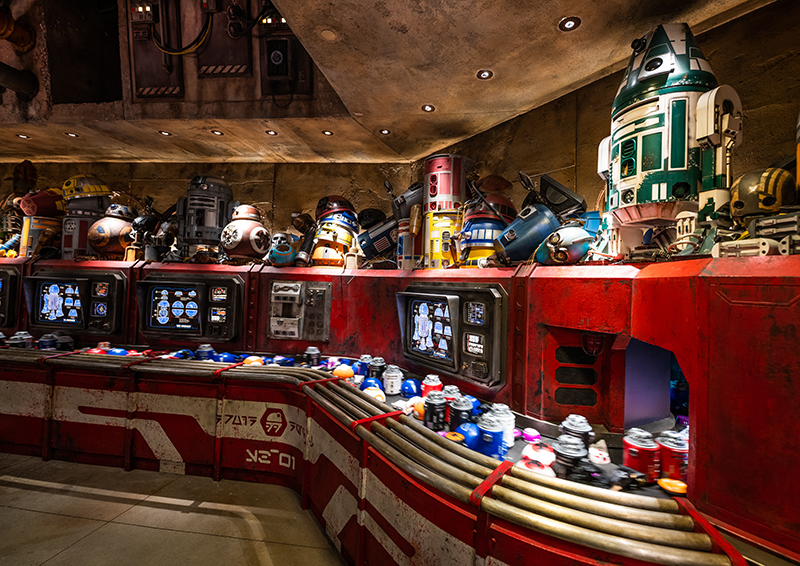 After Sarah saw a number of friends with very cute droids, we debated going back and doing Droid Depot. However, we also saw several falling apart while roaming around Star Wars: Galaxy’s Edge (technically not allowed, but we literally never saw this enforced) and the build quality felt cheap.

You could buy both the excellent Sphero R2-D2 and BB-8 app-enabled droids for just a bit more money than one creation from Droid Depot. Not exactly an apples to apples comparison, but I’d rather have the Sphero products. (Or, you could buy the DJ Rex non-customizable droid from Droid Depot.)

Ultimately, Droid Depot is a neat experience that I really enjoyed and probably would’ve reviewed much more enthusiastically had I not also done Savi’s Workshop. Even though it feels a bit like you’re churned through a production facility, there’s enough heart and substance to make it something special. However, when compared side by side to the lightsaber building experience, there’s a stark contrast, and Droid Depot leaves you wanting more.

Have you built a customized droid at Droid Depot? Do you agree or disagree with our assessment? If you done both Droid Depot and Savi’s Workshop, which did you prefer? If you’ve done neither, which is more appealing to you? Any questions? Hearing your feedback–even when you disagree with us–is both interesting to us and helpful to other readers, so please share your thoughts below in the comments!