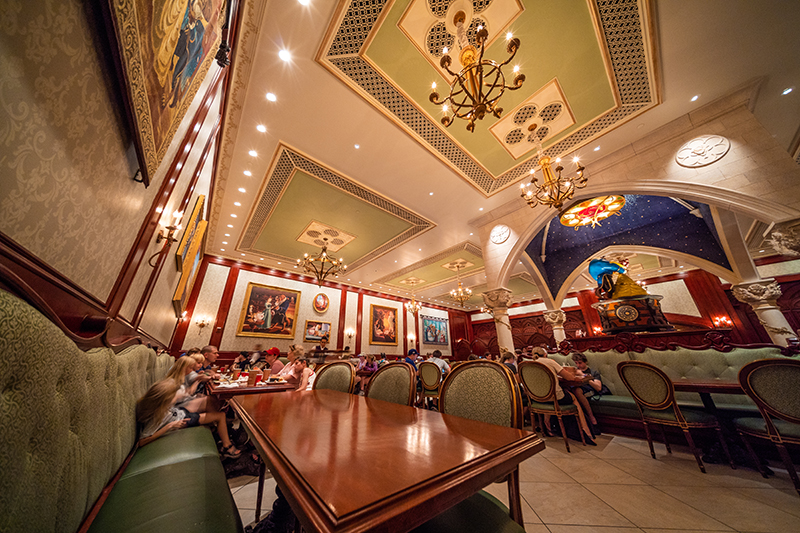 Be Our Guest Restaurant in Magic Kingdom at Walt Disney World has a new lunch menu! In this WDW dining review, we’ll take a look at all of the new items via food photos, compare them to their predecessors, and share thoughts on how this counter service restaurant stacks up to the competition in light of the changes.

For starters, some quick basics. Be Our Guest Restaurant is the hot ticket in Magic Kingdom and has been since it opened several years ago. Guests step inside Beast’s Castle in a setting themed to Beauty and the Beast. The restaurant is a Disney Dining Plan participant as a one-credit counter service restaurant at lunch. It also makes our list of the best counter service values when on the Disney Dining Plan (again, for lunch).

This Be Our Guest Restaurant menu update could be viewed as a way for Walt Disney World to effectively increase prices without being overly blatant about it. Previously, the cheapest menu items were a pair of $13 items (Quinoa Salad and Vegetable Quiche), both of which have been removed with this overhaul.

In their place, a pair of $15 items have been added to the menu. Those are now the cheapest entrees (unless you count the soups–and I don’t). Existing items have also increased in price, with all of the sandwiches now priced at $16 and up (for sandwiches!). Be Our Guest Restaurant has always been higher quality than other Magic Kingdom offerings, but at these price-points, it’s difficult to justify unless you’re on the Disney Dining Plan. 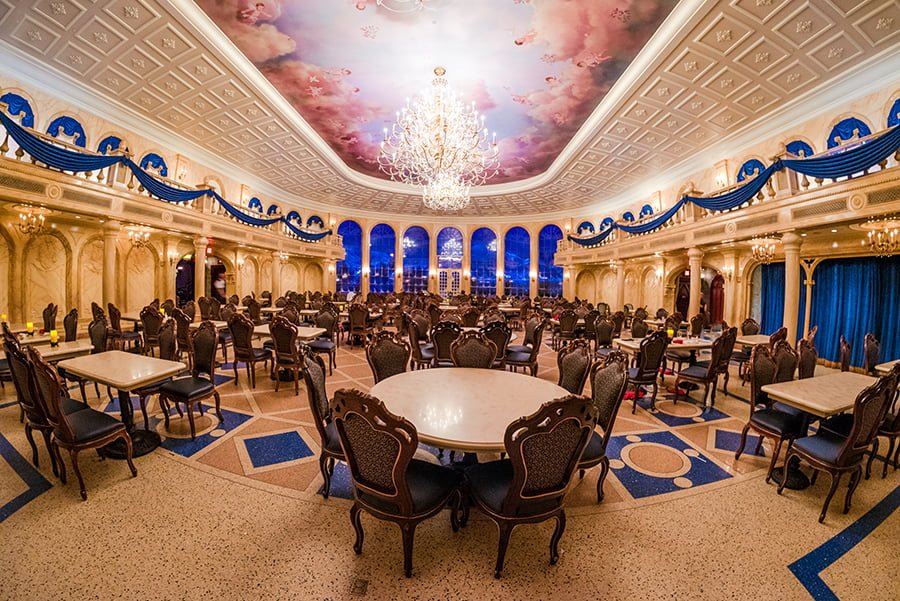 We consider this noteworthy because last year’s Prix Fixe Dinner change was made along these same lines, upping the average cost as a way to reduce demand (and increase revenue) at this massively popular location. The big difference here is that the lunch changes disadvantage those paying out of pocket, rather than those on the Disney Dining Plan.

Conversely, thanks to a new entree, Be Our Guest Restaurant at lunch is now the best way to maximize your counter service credit value on the Disney Dining Plan in Magic Kingdom–and one of the best options in all of Walt Disney World. As you can see below, there are actually several good ‘bang for buck’ options for those on the Disney Dining Plan… 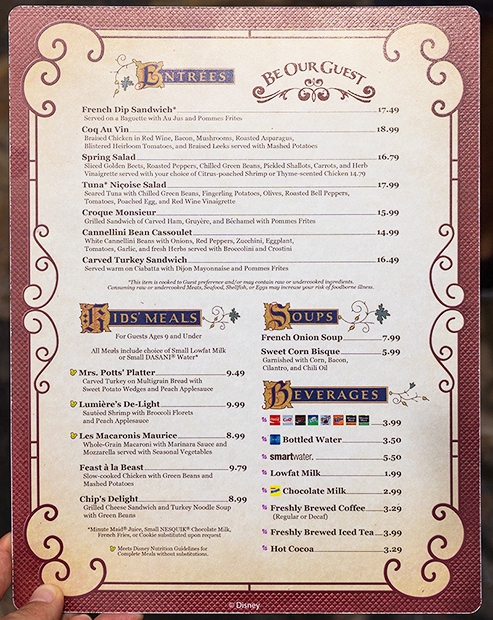 Fortunately, that still remains the case. Most of the tried and true favorites are still present at Be Our Guest, and several of the changes are lateral moves that will be at least vaguely familiar to Be Our Guest regulars. To us, this seems like a sensible approach and good compromise–freshen things up a bit while not trying to fix what isn’t broken. 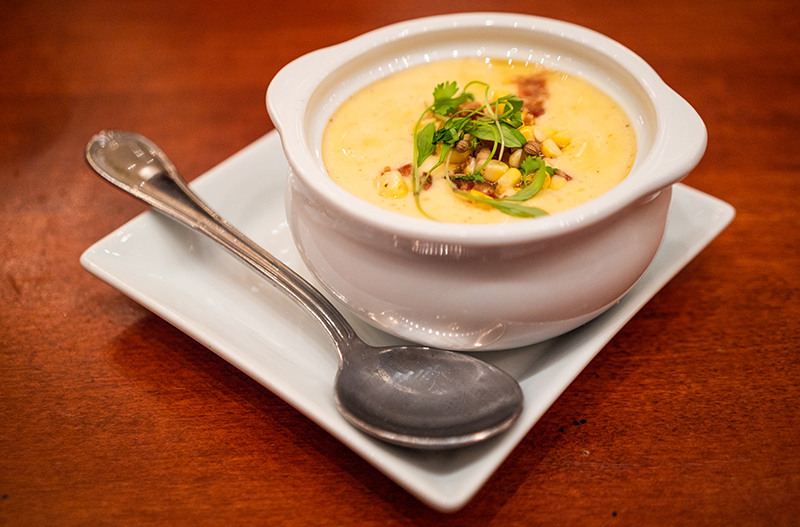 Rich, creamy, and with a nice texture thanks to the corn and bacon, this is a solid starter…albeit maybe not on a hot summer day. 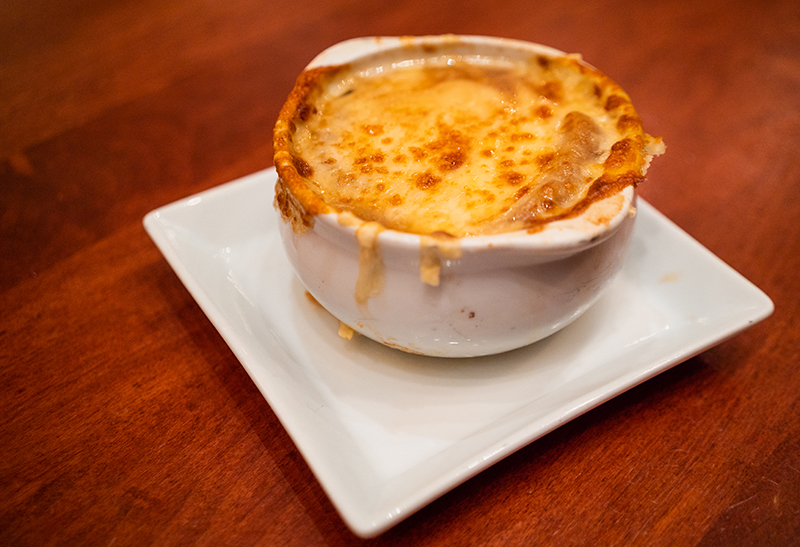 Still, it’s tough to compete with the tried and true French Onion Soup.

I’m not huge on soups so perhaps I’m rating this on that layer of cheese as much as anything else, but this is one of my favorite soups at Walt Disney World. 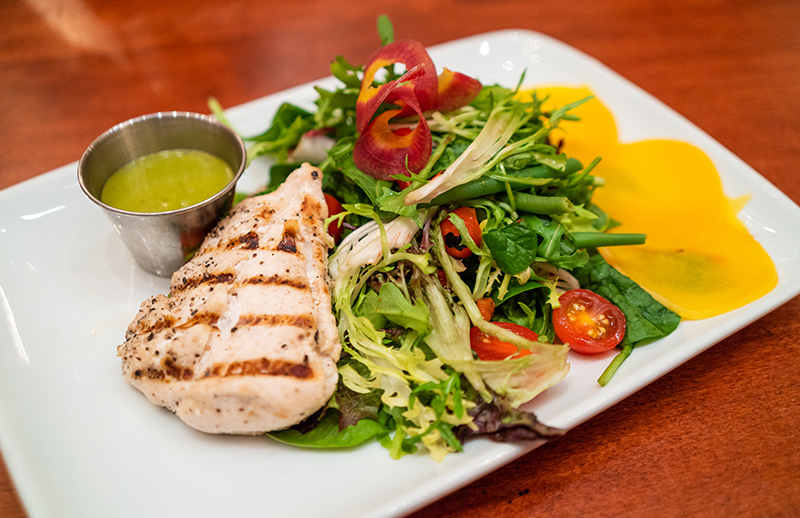 This is pretty similar to its predecessor, but with chicken instead of quinoa. This is a huge upgrade in my estimation, and is probably being made as the quinoa ‘trend’ is mercifully beginning to end (there ought to be a law against quinoa…so I don’t have to eat it every other night). It’s a refreshing and interesting salad, but with so many good salads at Walt Disney World now, it’s not the ‘revolutionary’ entree it once might’ve been. 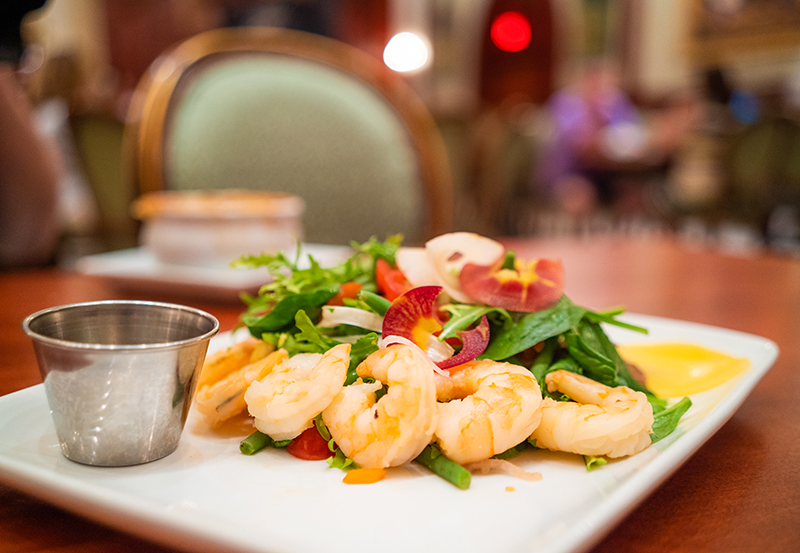 Basically, the same thing but with shrimp. It’s also $2 more expensive than the chicken version. Even if these were the same price, I’d opt for and recommend the chicken version. The shrimp is not particularly noteworthy, and isn’t as filling as the chicken. Still, if you prefer shrimp and want a salad, it’s a suitable option. 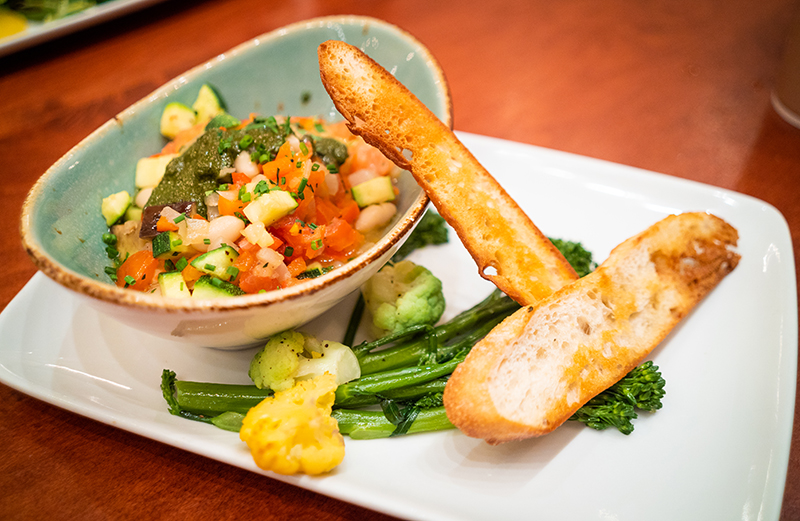 Despite cassoulet being France’s take on casserole, we all expected this to be a cold dish. Probably based simply on the presentation (and the fact that it’s currently ridiculously hot in Florida); it just looks refreshing, doesn’t it?

In any case, the hearty dish was a nice medley of fresh vegetables. It wasn’t really like a traditional casserole or stew; the vegetables were crisp and largely presented their natural flavor with a mix of herbs. Sarah loved this–it’s her new favorite lunch entree at Be Our Guest. I liked it but wasn’t as enthusiastic; still, I’d choose this over any of the salads (including the Tuna NiÃ§oise Salad). 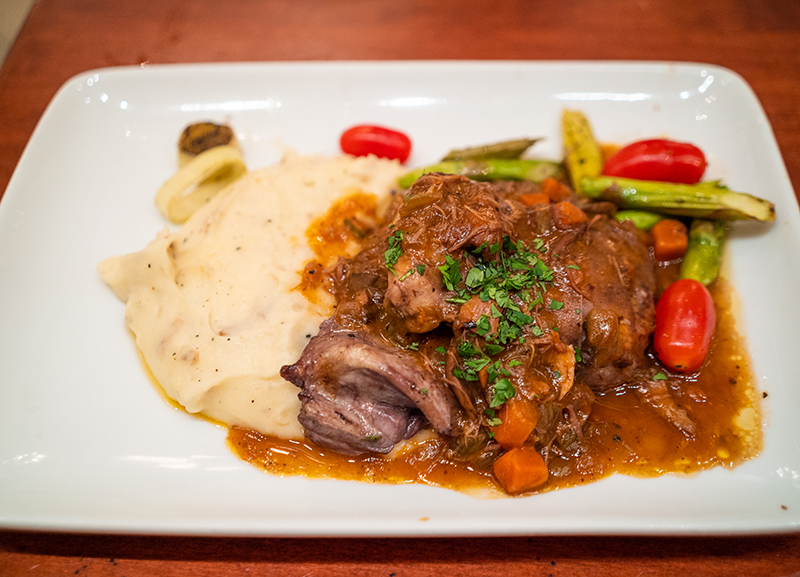 This replaces the braised pork. It’s been a while since I’ve had that, but I generally favor pork over chicken (and assume that would hold true here). Nevertheless, the red wine braise gave this dish a sense of sophistication I’d never expect from a counter service dish, and the chicken was incredibly tender. 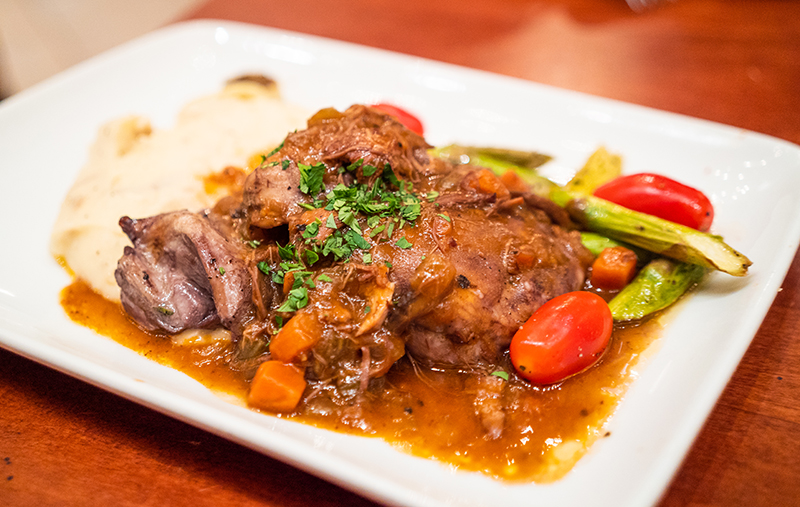 Paying out of pocket (as we were), I have a really tough time justifying a $19 entree at a counter service restaurant. However, the quality of the entire dish is on par with a lower end table service restaurant, and I guess that’s “close enough” to what Be Our Guest Restaurant is at lunch.

If you were paying out of pocket at an actual Walt Disney World table service restaurant, this dish would be more like $25, so there’s also that. Moreover, it makes an exceptional use of a Disney Dining Plan counter service credit.

In any case, the Braised Chicken is now the best item on the lunch menu. It’s obviously totally different, but I’d choose this over any of the sandwiches. Those are now overpriced for what they are (especially the French Dip), in my opinion; this is a better value for what it is. 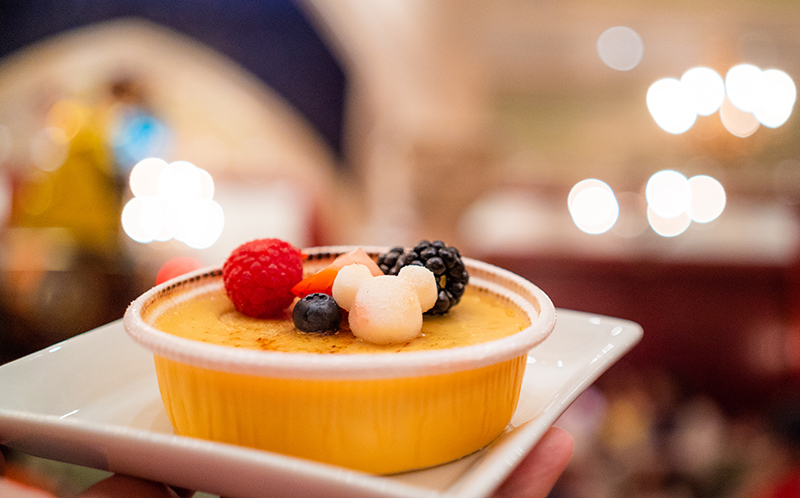 Finally, we have the new vanilla Crème Brulée topped with fresh berries for dessert.

This was the lone disappointment. The consistency and texture were both off, making it feel more like a cheap crème brulée imitator than the real thing. I’ve never been overly impressed by any of Be Our Guest Restaurant’s desserts (yes, even the famed “Grey Stuff”) and that trend continues. Skipping dessert at Be Our Guest and opting for some of the Best Snacks & Desserts in Magic Kingdom is recommended.

Overall, Be Our Guest Restaurant replaced about half of its lunch menu and the results are about the same…but more expensive. These are some pretty conservative beat-for-beat changes, and the new items are not markedly better or worse than what came before. That’s probably a good thing in this case (save for the price increases), as lunch at Be Our Guest Restaurant has been solid since it debuted–one of the few bright spots of the Magic Kingdom counter service dining scene. We’re hopeful that the upcoming changes at breakfast are more ambitious, as that menu has always been a bit “meh” and there’s definite room for improvement.

What do you think of lunch at Be Our Guest Restaurant? Looking forward to trying any of these items? Do you wish there would be a more ambitious overhaul of the menu, or do you take a ‘don’t fix what isn’t broken’ perspective? Do you agree or disagree with our review? Any questions we can help you answer? Hearing your feedback–even when you disagree with us–is both interesting to us and helpful to other readers, so please share your thoughts below in the comments!

47 Responses to “Review: New Lunch Menu at Be Our Guest Restaurant”