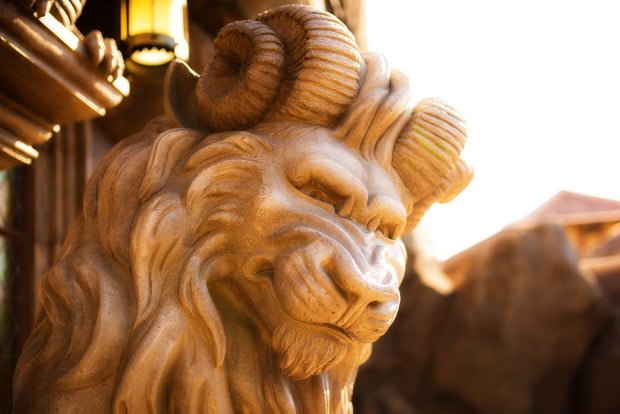 For starters, Be Our Guest Restaurant is the spot we’ve named the best counter service option in the Magic Kingdom at Walt Disney World–for lunch, at least. The restaurant is set inside Beast’s Castle and themed to the various rooms from said castle in Beauty and the Beast.

Demand for Be Our Guest Restaurant has been high since it opened with the first phase of the New Fantasyland expansion, and several years later, it still hasn’t really died down. This is in large part due to the cool setting, which makes it one of the best themed restaurants at Walt Disney World. However, as is true of much of what ails the world, I blame the internet.

Irresponsible bloggers have written about the difficulty of scoring Be Our Guest reservations and others have hyped this into the new “it” Walt Disney World restaurant. Like Cinderella’s Royal Table and Le Cellier before it, Be Our Guest Restaurant has become more popular by virtue of its popularity, as everyone wants to get into the restaurant that is difficult to book. In other words, its popularity is a bit of a self-fulfilling prophecy.

It only makes sense that Disney has responded to said prophecy by finding a way to open the restaurant for another meal. While I was personally hoping for “Fourth Meal” seatings catered by Taco Bell, I guess breakfast will have to suffice. This gives more guests the chance to enjoy the fun setting of Be Our Guest Restaurant and allows Walt Disney World to sell more meals. 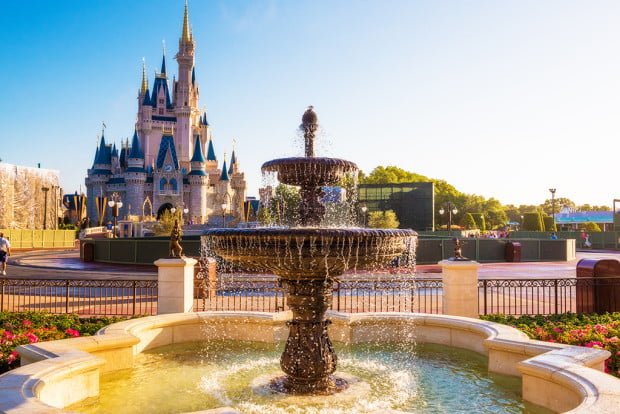 Before we get to the thrilling conclusion of that cliffhanger, let’s cover our experience at Be Our Guest Restaurant for breakfast. For starters, since I wasn’t thinking and made the ADR less than two months in advance, our options were limited, and we got stuck with 8 am on an Extra Magic Hours morning.

Normally, I consider 8 am the perfect time slot for breakfast in the Magic Kingdom, but I recommend going on non-EMH mornings. 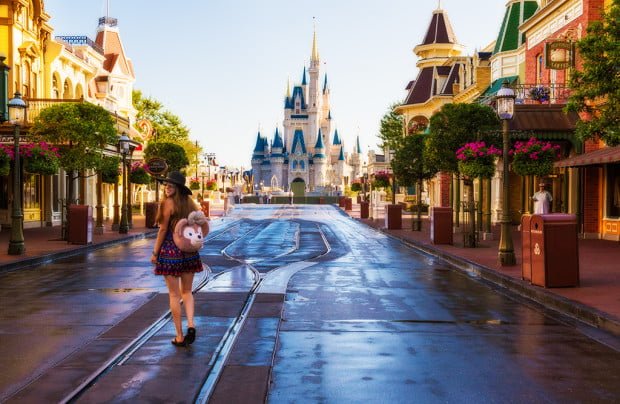 We were out the door from Caribbean Beach Resort by 7 am, and got to the Contemporary by about 7:15 am via Uber. (Have I mentioned yet how much I love using Uber at Walt Disney World?!)

From there we were through the turnstiles by 7:30. After that, it was a waiting game until 7:50 am when they finally let in guests people with ADRs. 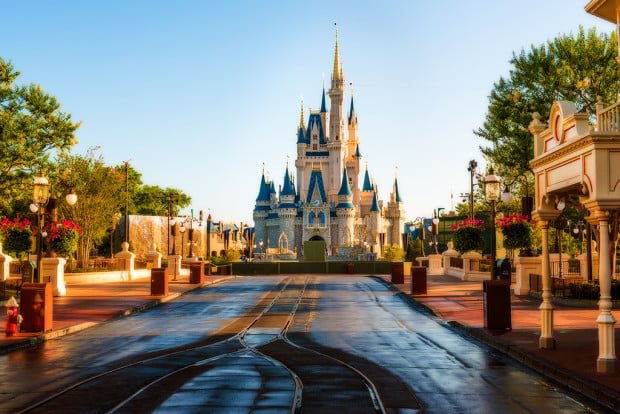 It was a mad dash up Main Street as we tried to quickly get photos along the way with the park devoid of guests with our 10 minute window of early entry. These empty park photos are something I do at night with regularity, and it honestly never gets old. I’m like a kid on Christmas every time.

We are huge fans of doing ADRs in these early morning hours. You can read all about this in our Strategy for Pre-Park Opening Breakfasts at Walt Disney World. Given the price and its location in New Fantasyland, this is actually arguably the best option for a pre-park opening (PPO) breakfast in Magic Kingdom. 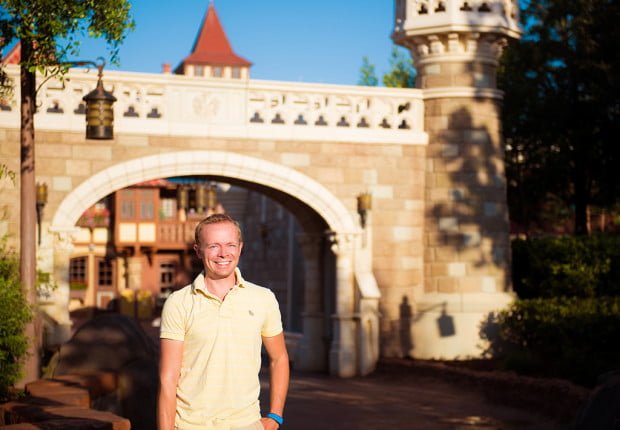 Beyond taking empty park photos on Main Street and in Fantasyland, the big advantage that both Be Our Guest Restaurant and Cinderella’s Royal Table offer is that they are beyond the rope drop barriers (unlike Crystal Palace and Plaza Restaurant).

This means that you have a potential rope drop advantage for Seven Dwarfs Mine Train if you do either Be Our Guest Restaurant or Cinderella’s Royal Table. If you finish eating before park opening, there’s a good chance you’ll be among the first in line for Seven Dwarfs Mine Train. It varies by day, but we’ve even had success riding once before rope drop and then lining up again before the crowd arrived! 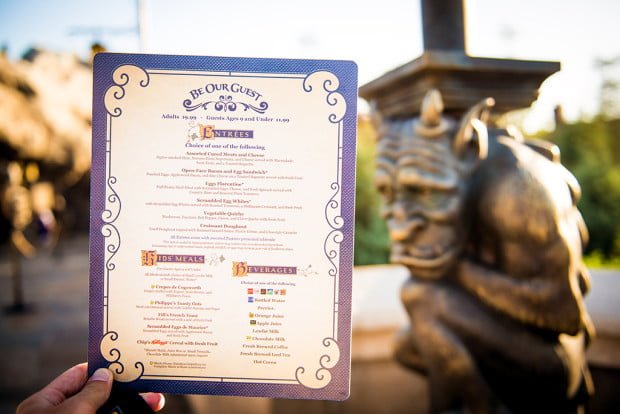 Breakfast at Be Our Guest Restaurant is prix fixe, including an entree, beverage, an assortment of pastry selections for sharing at your table, and is priced at $29 for adults & $16 for children.

That’s unquestionably a lot of money for what you’re receiving, but keep in mind that this is only one counter service credit on the Disney Dining Plan. If you’re paying out of pocket, consider the value of those empty park photos and/or rope drop advantage. 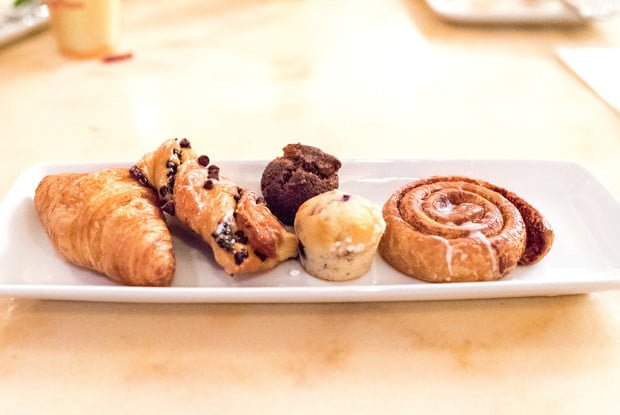 Let’s start by taking a look at the plate of pastries that came out “for the table.” I suppose if you really want to ‘hack’ this meal, your entire group can go in as parties of 1, ordering separately and each sitting at different tables. (This might also be a good pretense for getting away from those in your group who aren’t morning people.) That assumes, of course, that you care about these pastries. They are pretty much the same things that sit around at every resort hotel’s counter service spot at breakfast.

We have never purchased any of those, and now I know why: they are nothing special. These pastries were by no means bad, they were just totally forgettable. I’d be lying to you right now if I described how any of them tasted, because I didn’t even remember by the end of the meal. If you’re still hungry after your entree eat some of them as they are fine, but don’t expect anything amazing. 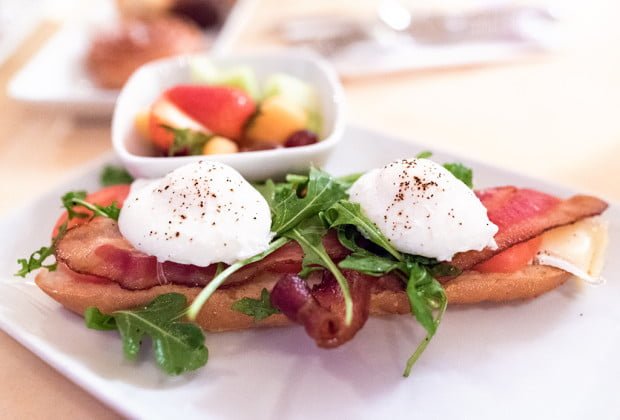 She liked the breakfast sandwich but was not blown away by it. The quality skewed more towards a table service breakfast entree than a counter service one and was pleased that it wasn’t overly greasy. She said the eggs were good, as were the brie, tomato, and arugula. She thought the baguette was slightly harder than a normal baguette, though. 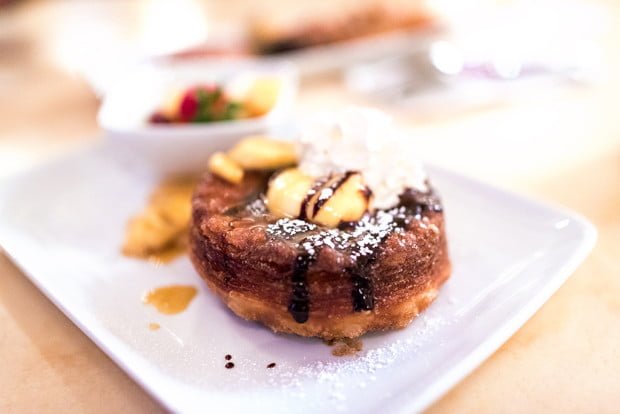 I took one look at the menu and knew what I wanted–nay, needed: the Croissant Doughnut. Otherwise known as the cronut, this divine culinary wonder is thus far the greatest invention of the 21st Century. That’s high praise, considering that Truck Nuts were also conceived of during this century.

This cronut was…just fine. The cronut is topped with banana caramel sauce, vanilla pastry creme, chocolate ganache, and whipped cream. It was large, decadent, and glorious-looking, but like the open-face sandwich, it just didn’t blow me away.

The dough was a bit rubbery and the whole thing was just way too sweet. I love sweet, unhealthy foods, but this was way too much. There was no restraint whatsoever–it was sort of like a breakfast prepared by Buddy the Elf. In the end, any cronut is better than no cronut, but I prefer the <$6 cronut a la mode in Epcot. 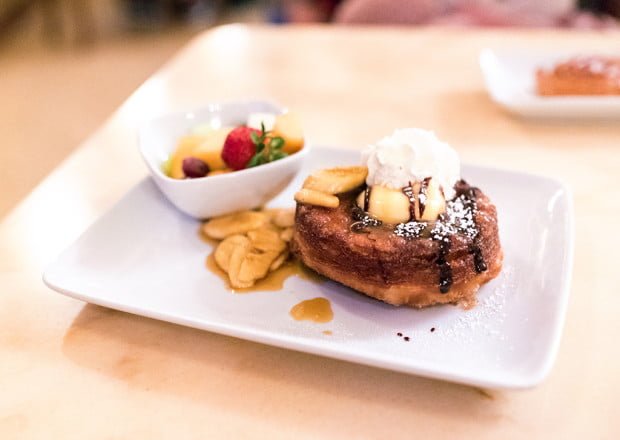 As compared to a buffet like Chef Mickey’s or Crystal Palace, the price here isn’t outrageous–but it’s also not a buffet. When you compare it to counter service breakfasts, or a hidden gem like the Trail’s End breakfast buffet (which costs the same amount for far better and unlimited food), it seems like a worse value. 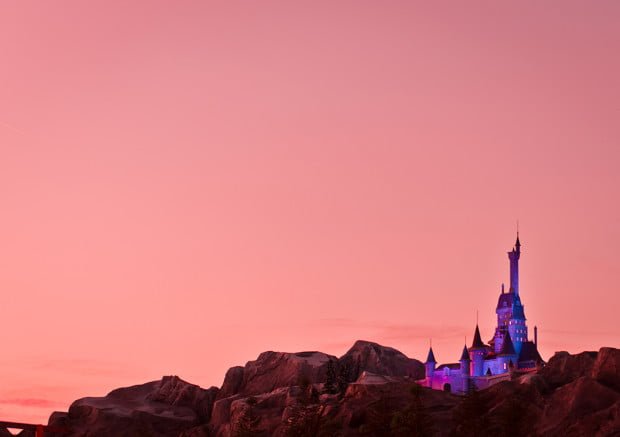 On the plus side, it does allow more guests to see the restaurant, which is cool and worth experiencing, despite some of my quibbles with the design choices (the creepy Imagineer-tribute babies still bug me). The problem I have with the breakfast besides the value is that it only works out to be the “best” way to experience Be Our Guest Restaurant in a narrow set of circumstances.

This is because lunch is (or at least was, when I was trying to book) the easiest reservation to score at Be Our Guest Restaurant, is the cheapest way inside, and is also the best counter service meal in the Magic Kingdom. By contrast, breakfast is harder to book, not as good as lunch, and more expensive. 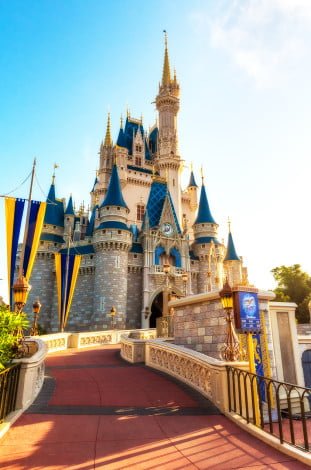 Overall, breakfast at Be Our Guest Restaurant is a passable meal, albeit pricey for breakfast. Let’s not kid ourselves, though. This meal isn’t about the food: it serves as a way to get into Be Our Guest Restaurant and/or into the Magic Kingdom before park opening. The food alone simply isn’t good enough to justify the price, but when factored with seeing a popular, well-themed restaurant plus getting into the Magic Kingdom before park opening, I think it can be a worthwhile experience.

There are some guests for whom Be Our Guest Restaurant’s breakfast will be perfect, and they will absolutely love it. To that end, I don’t fault Disney for offering it. It definitely does have its strengths and will work well for some parties, but I don’t see us doing it again. If you don’t have a desire to get into the Magic Kingdom before it opens for empty-park family photos or the like, you should skip breakfast and do lunch at Be Our Guest Restaurant, instead, for those are the better meals here.

71 Responses to “Be Our Guest Restaurant Breakfast Review”