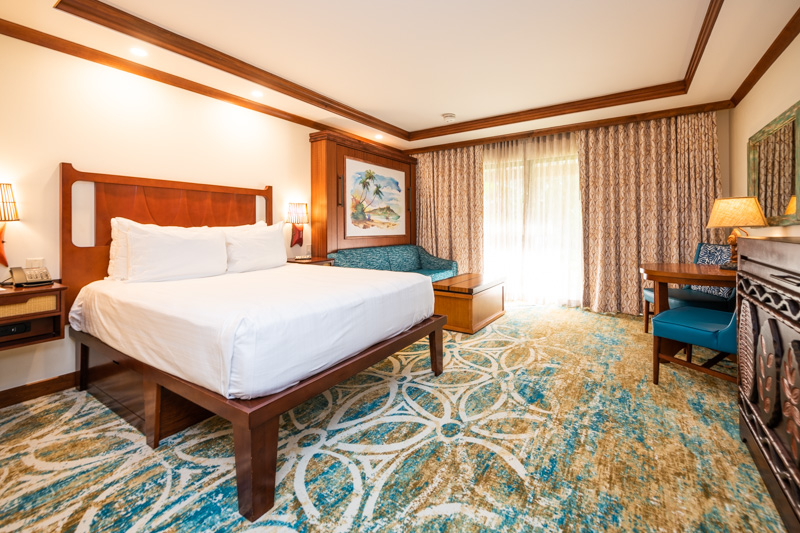 After all of that wrapped up and opened, it might’ve seemed like the refresh of the Poly was finished. And on the hotel side of the resort, that was certainly true. However, that project that began last year overshadowed another room renovation occurring in a few of the longhouses over by the TTC and waterfront bungalows.

A few months later, the quiet room renovations to Disney’s Polynesian Villas & Bungalows are also now finished, modernizing those rooms, this time minus Moana. This review share photos, video, and our thoughts on Walt Disney World’s redone Poly villas, how they compare to the old ones, Moana-inspired rooms, and other recent redesigns to Deluxe Resorts.

This process was set in motion at last December’s Condominium Association Meeting, where Disney Vacation Club executives shared a timeline for updating villa interiors over the next 2 years. During that, it was revealed that the Villas at Disney’s Grand Floridian Resort & Spa and Disney’s Polynesian Villas & Bungalows would be the 2021 projects at Walt Disney World.

The latter was something of a surprise, moving forward from its previous 2022 date. The Poly villas bumped the Boulder Ridge Villas at Disney’s Wilderness Lodge, which had already been delayed from their slot last year due to the closure and pausing of construction. 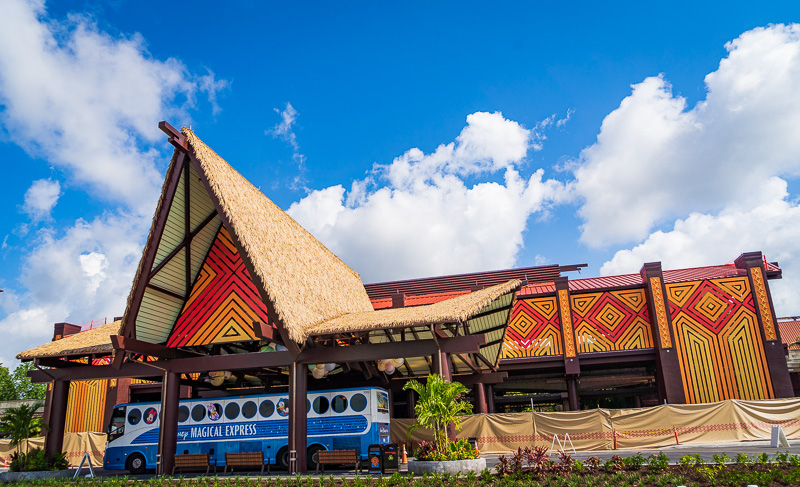 It’s possible that Walt Disney World wanted to knock out the Poly projects in quick succession as a way to better allocate resources and minimize construction impacts. It’s also possible that the Polynesian Villas were prematurely showing their age–even back in 2019 we had noticed that the rooms were looking a bit worse for wear. Or, it could’ve been a bit of both.

Regardless of the motivation, the project is now finished. Pago Pago reopened in late August, followed by Moorea in mid-September, and Tokelau in two phases by early October. Let’s take a look inside one of the new rooms… 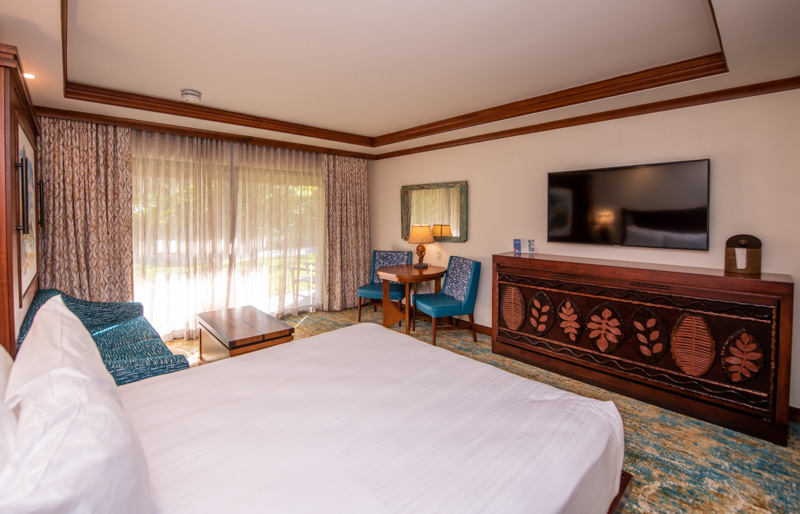 The Poly villas project is a soft goods refresh rather than a full refurbishment, although this is one of the more significant soft goods renovations in recent years. 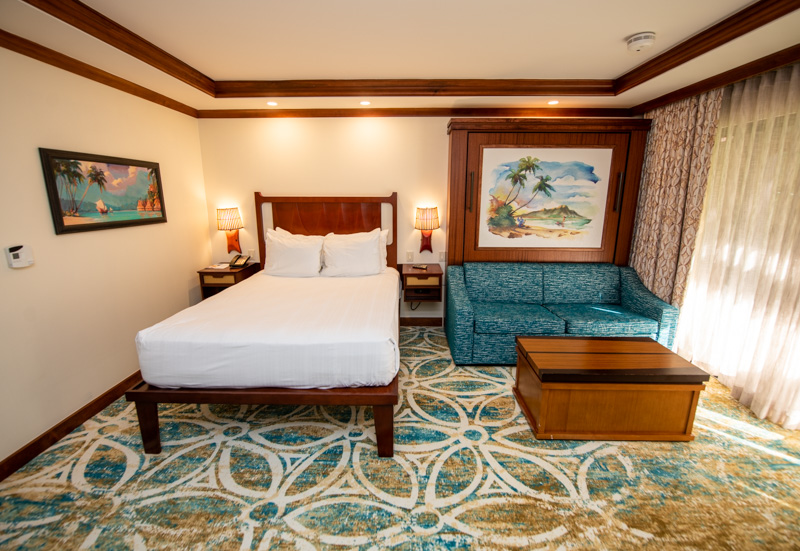 Most notably, the pull-out sofa beds were replaced with Murphy bed-couch combo units.

Rather than adding Moana references, the added art above the couch features Stitch in a pretty and otherwise lowkey watercolor scene of Hawaii. 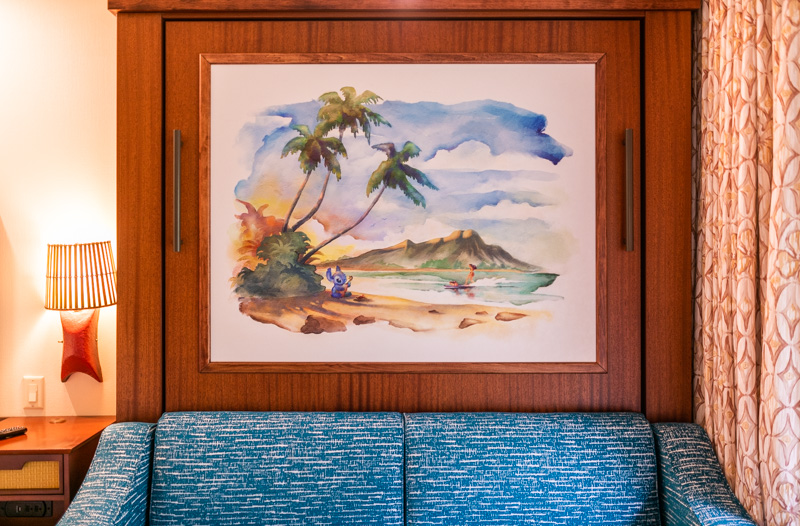 Here’s a closer look at the Stitch art. It’s quite lovely.

I also appreciate that Walt Disney World is finally starting to highlight the charming and endearing side of Stitch. For several years, it was all about mischief and the character became a bit annoying. Not that you care, but now he’s one of my favorites. 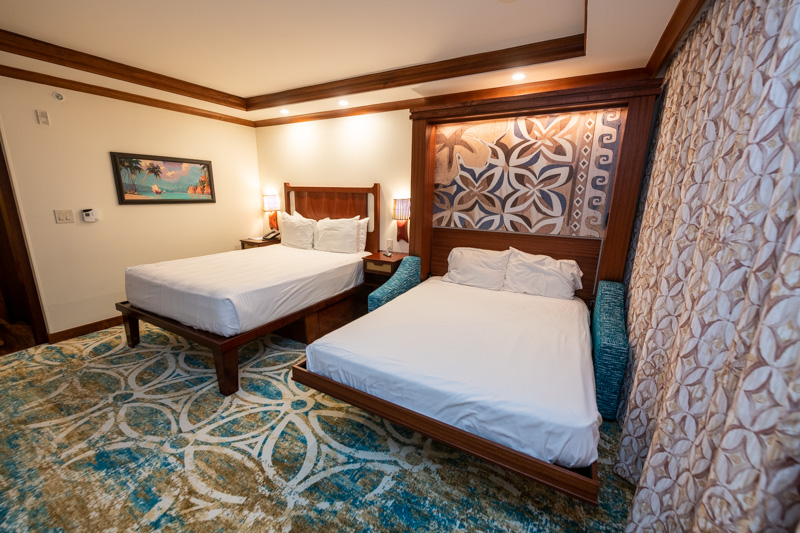 In terms of functionality, there’s no question—these are far superior to what was there before. The pull-down Murphy bed is far more comfortable than the sofa sleeper.

This is identical to the system added at Disney’s Riviera Resort and Saratoga Springs, and also somewhat similar to the one at Pop Century and the All Stars. 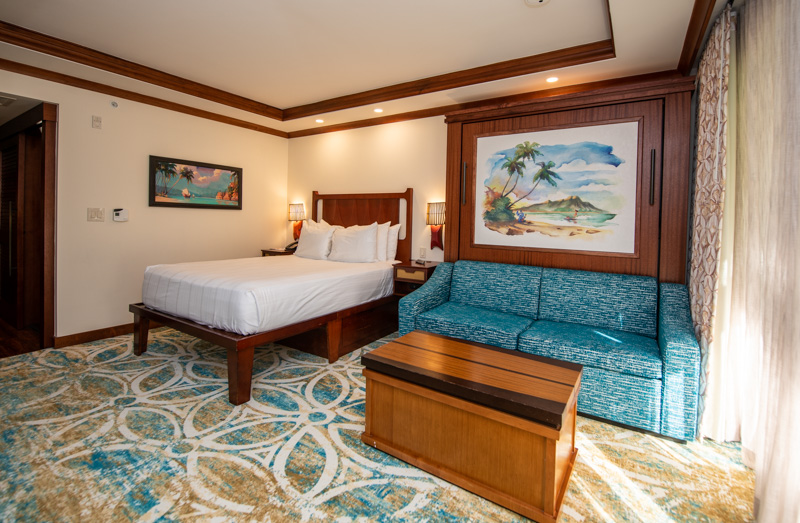 If test rooms are any indication, the exact same thing is coming to Boulder Ridge and the Grand Floridian Villas. Based on past precedent and the photos I’ve seen of those, I’m really looking forward to the coming updates.

While reasonable minds may differ about pretty much every other aspect of room designs, there’s near unanimous agreement about these pull-down beds. They’re a great addition to the studios; a true innovation for the hospitality industry and Disney Vacation Club. 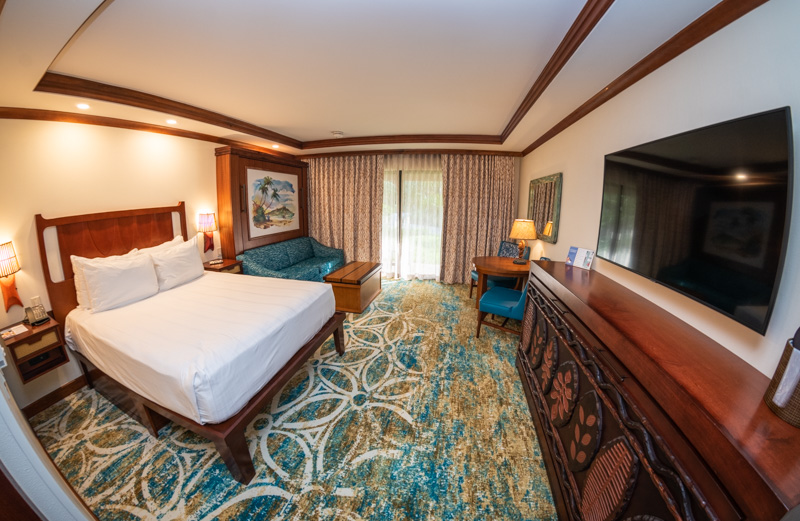 When it comes to things about which reasonable minds may differ, I can’t say I’m a huge fan of the carpet. I don’t hate it–just isn’t my favorite thing.

I don’t know what you’d call this, so how about “battered pattern.” It’s like there’s a design, but that has been weathered, and also it’s modern. For my tastes, it’s trying to be too many things at once. Then again, maybe I’m just old and not hip with the times. 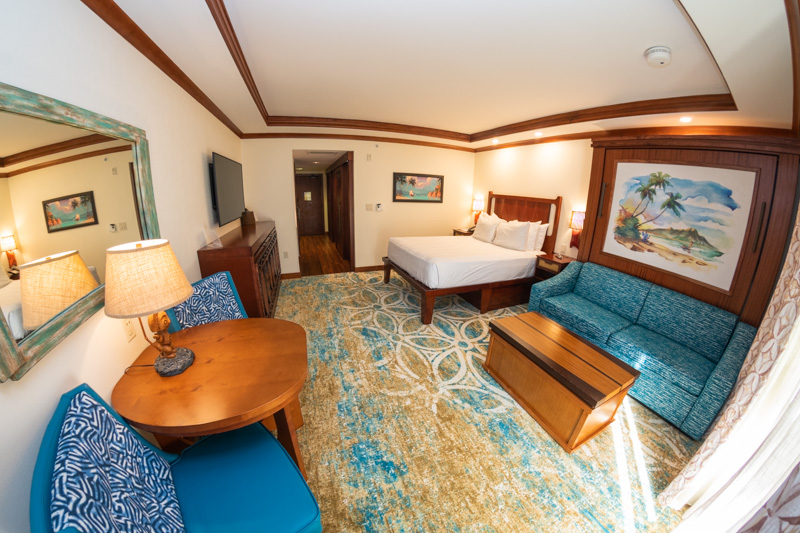 My guess is that this is better at hiding stains than the old carpet, and was designed with that in mind. If so, a bit more forgivable. Last time we stayed at the Poly Villas, the carpet was definitely looking a bit worn.

Still, I liked the pattern and tactile quality of the old carpet. I think it would’ve been nice if it were blue or aqua, rather than beige, but perhaps that would’ve been ‘too much.’ 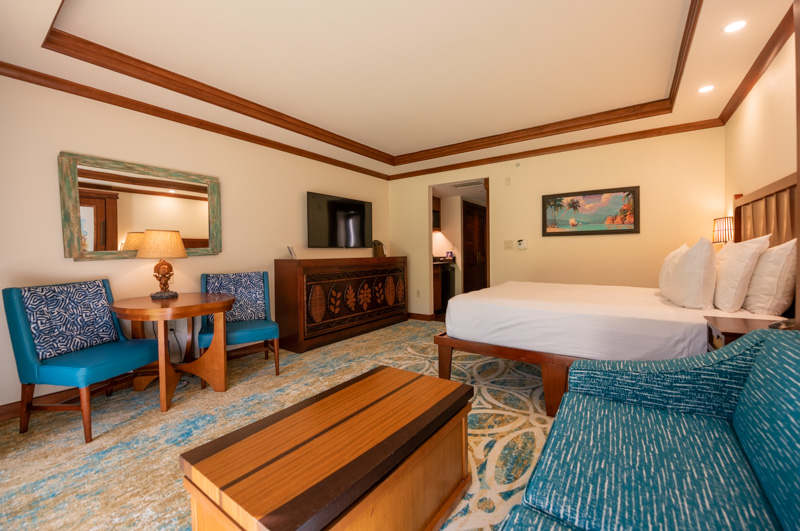 The chairs and couch look very similar to those found in the Moana rooms on the hotel side of the Polynesian, but they are slightly different.

I liked the old two-tone sofa with mismatched throw pillows and the orange side chairs, but it’s hard to complain about any of this. Calming colors with nice texture and subtle patterns give it chair. 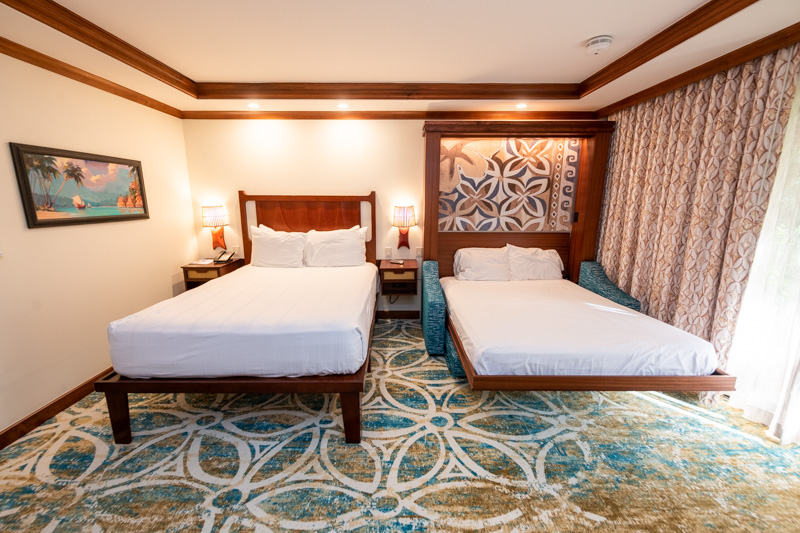 I do wish there were a tad more orange beyond the light sconces. Those really pop and the complementary blue and orange would look great. As it is, there’s a maybe a bit too much beige, but this is arguably less neutral than the prior design.

While there’s a lot going on here with the carpet, I still think the overall design of the Polynesian Villas is less busy and more calming than the Moana rooms on the hotel side. When you’re lying in bed or sitting on the sofa, you’re focused less on the carpet than when you’re looking at photos that point the camera down towards the carpet. 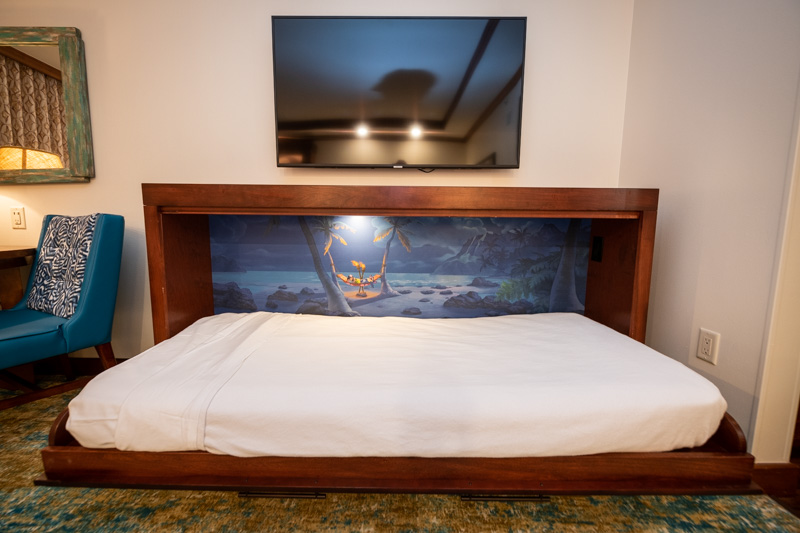 The pull-down sleeper under the television is unchanged on the inside.

On the exterior, it has been repainted to remove the splashes of aqua, yellow, and red on the carvings. 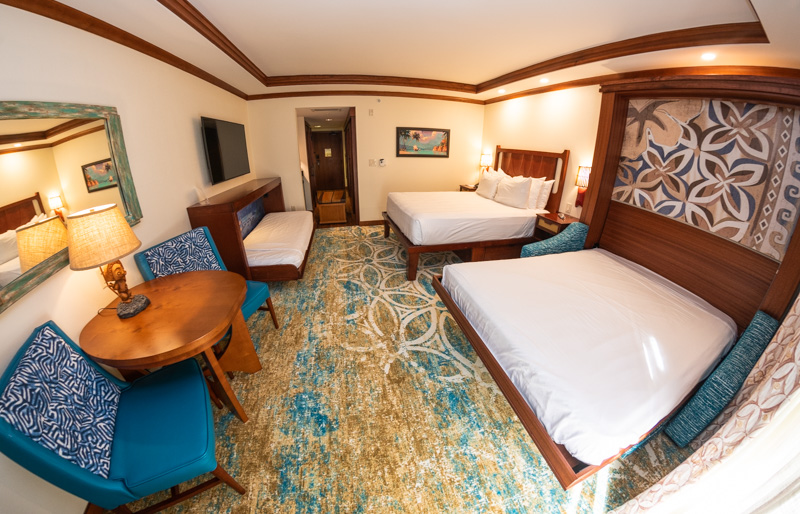 Here’s a look at the studio with all three sleeping surfaces, which enable these rooms to sleep up to 5.

It’s hard to tell from a distorted fisheye photo, but the Polynesian Villas are more spacious in this configuration than any other studios. These benefit from the larger rooms of the Poly, but also an exceptional configuration and use of space. 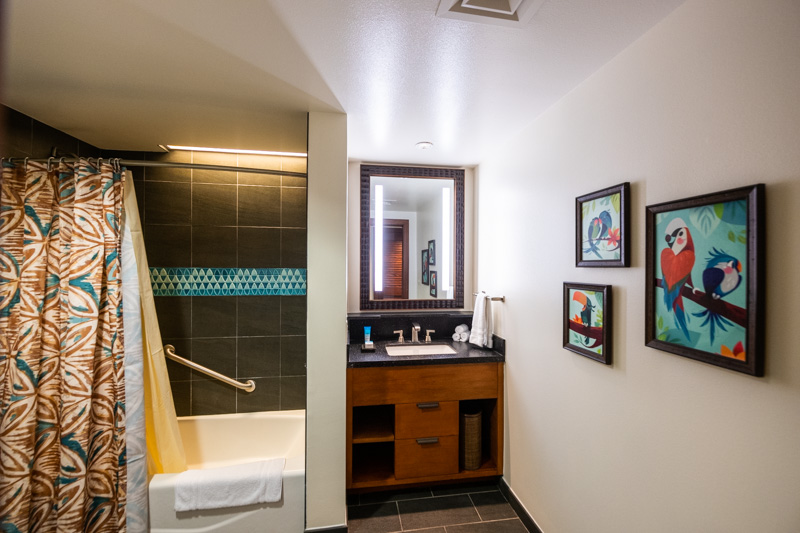 There are also minor changes to the bathrooms.

The far wall has been repainted from a rich blue to an off-white and the orange shower curtain has been replaced. 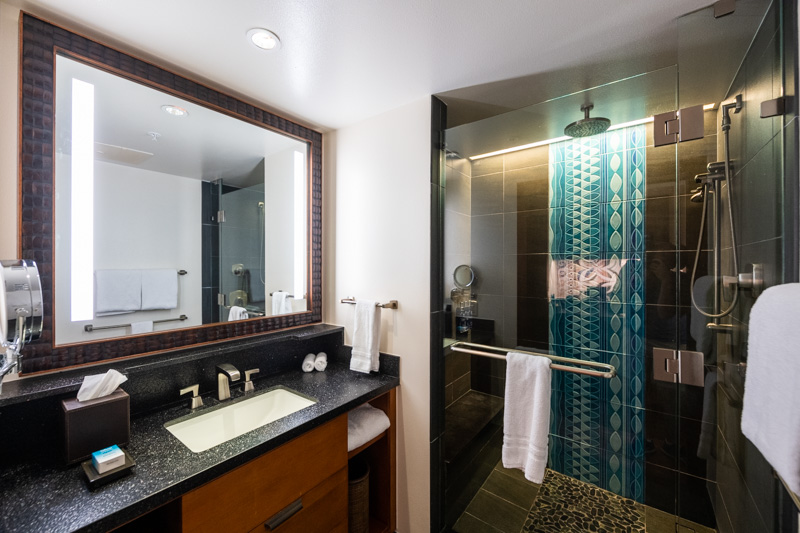 I don’t have a strong opinion on any of this one way or the other.

I’m a big fan of all things blue, but maybe that would’ve been excessive given the bedroom? Perhaps guests want brighter bathrooms? So long as there’s some legitimate explanation, it’s fine by me. 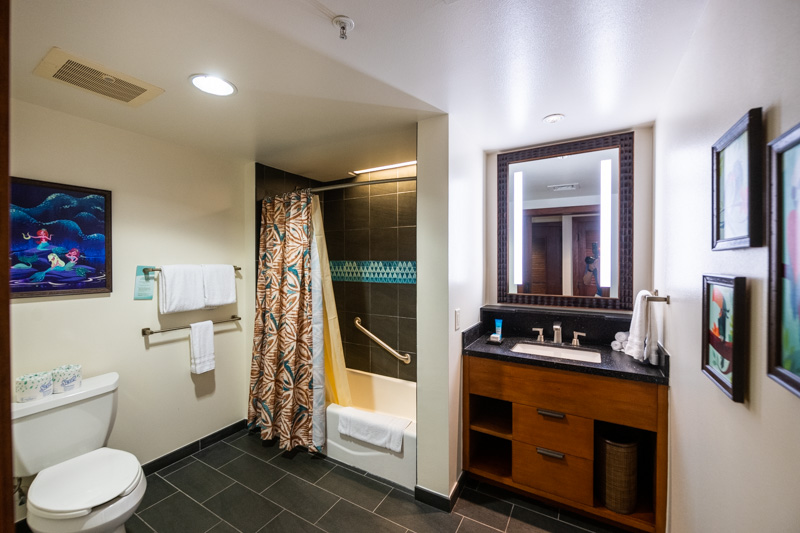 Quibbling about wall coloring or shower curtains seems nitpicky when the fact of the matter is that there are two bathrooms in these rooms and the set-up is far, far superior to any other studio–or even standard hotel room at Walt Disney World.

I also think more art has been added to these bathrooms. Assuming my file photos accurately reflect all studios, the mermaid painting was previously on the other wall and the birds were above the couch in the living room.

Above is a video Sarah shot of the new studios at the Polynesian Villas. (Note the “magical” transformation–this one wasn’t easy to pull off!)

Ultimately, my perspective on the remodel as a whole more or less mirrors the changes to the bathroom. I don’t love all of the new aesthetics, which give the room less of a playful and somewhat kitschy mid-century modern vibe. But I don’t have a strong negative opinion about any of it either. All things considered, I like these rooms, minus Moana, better than the new ones plus the character on the hotel side.

Then there’s the upgraded pull-down sofa, which is an unequivocal upgrade and far more significant and substantial of a change than the carpet or other visuals. That improvement on top of what was already the best Disney Vacation Club studios at one of Walt Disney World’s best resorts makes for a winning combination. There was a lot to love about the Deluxe Studios at Disney’s Polynesian Villas & Bungalows before, and on balance, there’s even more now.

What do you think of the new-look rooms at Disney’s Polynesian Villas? Glad there’s no Maui tattoo feature wall art, or think this room could use more of visual interest? What about the other furnishings, fixtures, or decor? Thoughts on the carpet pattern? Do you agree or disagree with our review? Do you prefer the look of the old or new rooms? Any questions we can help you answer? Hearing your feedback–even when you disagree with us–is both interesting to us and helpful to other readers, so please share your thoughts below in the comments!