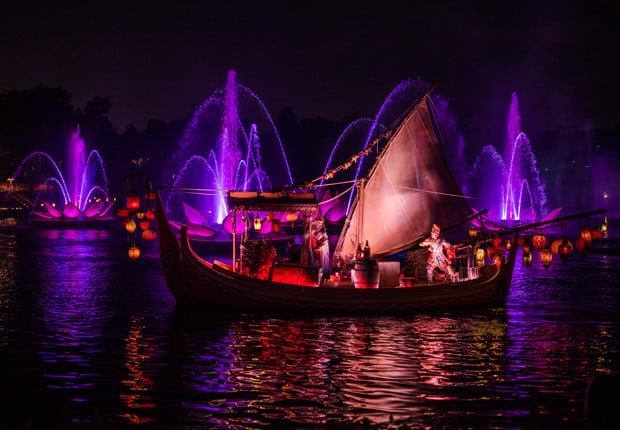 Rivers of Light is the “new” nighttime spectacular at Animal Kingdom, offering entertainment for Walt Disney World guests staying a full day in the park thanks to Pandora – World of Avatar. In this Rivers of Light review, I’ll share photos from the show, thoughts about it, how it fits into an Animal Kingdom itinerary, and more.

Now, I realize Rivers of Light is new-ish rather than brand new, having debuted in February of this year. Given that many of you who read this visit Walt Disney World about once per year, there’s a decent chance you’ve already seen this. However, it took us a couple of trips before finally taking the time to watch the show–and many of you expressed interest in reading this review, so perhaps it is still relevant.

Regardless, I’m going to keep this review fairly brief (by my standards). While there are interesting aspects of Rivers of Light worth discussing, this is an understandably polarizing nighttime spectacular, and it’s fairly easy to make recommendations on that basis. With that said, this should probably be two different reviews to Rivers of Light: my impressions of the show and whether I think it’s worth the time…

I’ll start with my overall impression of the show. For me, Rivers of Light is a flawed but nonetheless enjoyable show. At its best, Rivers of Light features a brilliant confluence of sound and light, offering a multi-sensory experience that is mesmerizing. A truly beautiful experience. 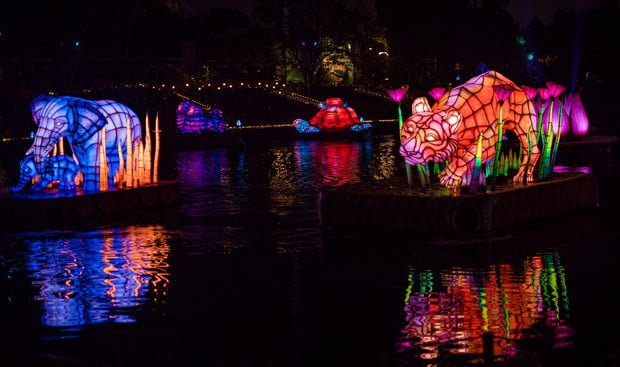 Personally, I still prefer the soundtrack for IllumiNations, but I’ve also listened to the full 68-minute pre-show through post-show IllumiNations audio track more than any other Disney music (per iTunes stats, at least), by a huge margin. So there’s at least some bias on my part there. In any case, for Rivers of Light’s soundtrack to be mentioned in the same sentence as IllumiNations soundtrack is about the highest praise I can give it.

Rivers of Light utilizes mist screens, fountains, lasers, music, boats, floats, and performing shaman, to bring to life its world. This is all awash with color, and some pretty impressive technology. Going on these visuals alone, Rivers of Light is gorgeous. I will say, though, that the normal “photos don’t do it justice” line does not apply here. If anything, photos do it too much justice. Whether the stunning imagery and beautiful soundtrack is enough to carry the show is a matter of personal taste and expectations.

As with IllumiNations, Rivers of Light features zero Disney intellectual property. This is going to buck expectations for many guests, I suspect. As someone who is primarily a Disney theme parks fan rather than Disney movies fan, I greatly appreciate this. Don’t get me wrong, I love Happily Ever After, which is the perfect show for Magic Kingdom. At Epcot and Animal Kingdom, I feel that a different tone is appropriate. Your mileage may vary. 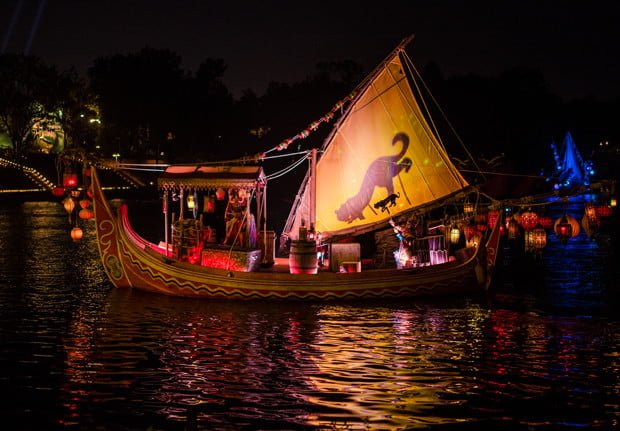 Also like IllumiNations, Rivers of Light is fairly abstract. Disney describes the show as “a timeless show that celebrates the beauty of all living things” featuring a procession of animal spirits that transport guests across the world. I think that’s a fairly apt description. There’s a lot of nuance, symbolism, and subtle beauty to Rivers of Light, and it’s nice to see another nighttime spectacular at Walt Disney World take an elegant and understated approach.

If you’re a family with small children visiting Walt Disney World for a character-driven experience, the lack of Disney IP and understated approach might make Rivers of Light a non-starter. While the color and light was entrancing to the kid in me, I could envision actual child growing antsy during Rivers of Light. 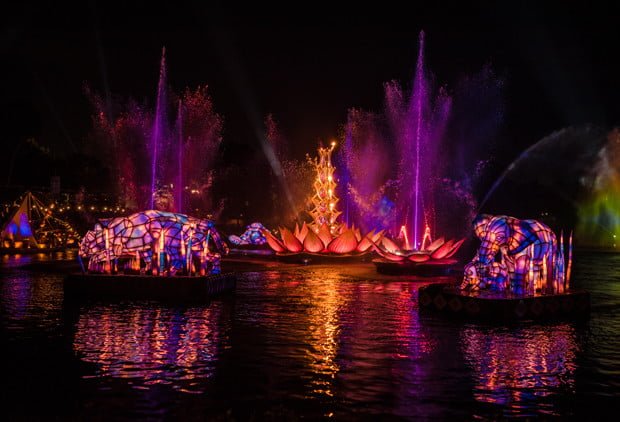 Those who complain of IllumiNations’ purported “slowness” will no doubt feel the same way about Rivers of Light. In the past, I’ve argued that IllumiNations has no problems in this regard; that audiences with short attention spans are the issue. I stand by that, and maintain that IllumiNations builds perfectly to its finale.

I cannot offer that same defense of Rivers of Light. The biggest problem for me is that Rivers of Light it doesn’t build to anything, and is sort of all over the place. At least part of this stems from the show being hacked from its original version, which was 21 minutes long (listen to the soundtrack here–it’s beautiful from beginning to end) to the “finished” 15-minute version. 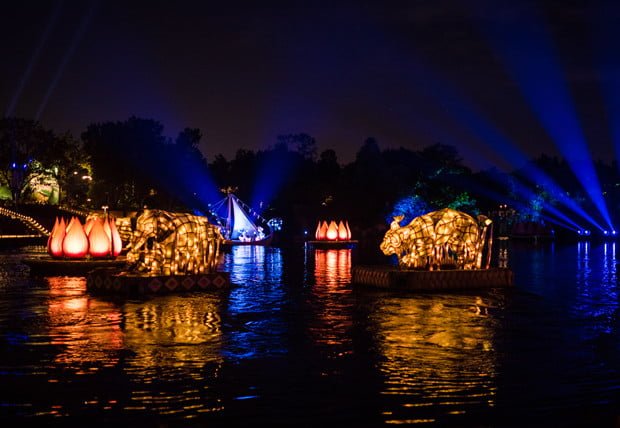 About halfway through the finished version of Rivers of Light, the soundtrack reaches something of a crescendo, which is the closest thing this version of the show has to a climax. In a normal Disney nighttime spectacular, this would build into the grand finale, after which you’d have something of an epilogue winding down. That doesn’t exactly happen here. I never saw the full/original show, but if I had to guess, I’d say Rivers of Light’s runtime was ultimately truncated due to guest feedback that the show was boring and too long.

This would come as no surprise; it’s the same type of feedback that IllumiNations elicits, and that show has pretty overhead explosions to placate the Michael Bay fans out there. There are a lot of guests who are not be interested in experiences that last 20 minutes, much less ones that can be described as “subtle” and “understated.” 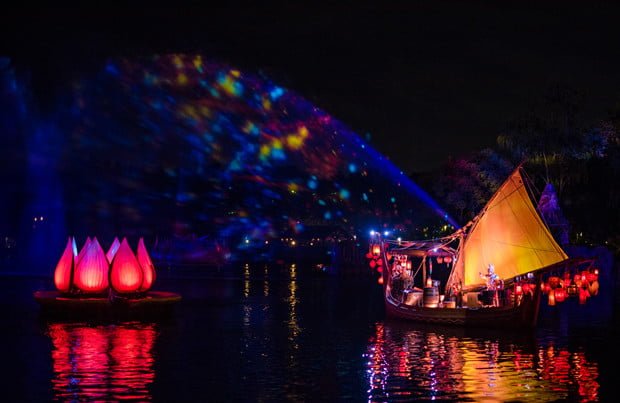 Serious technical issues caused some visual wizardry to be cut, which might’ve also impacted the final runtime to some degree. There has been a lot of speculation that the visual ‘wow-moment’ originally planned for Rivers of Light had to be dropped because it couldn’t get off the ground. A stunning visual climax definitely would’ve helped make Rivers of Light more of a crowd-pleasing experience.

Personally, I’m not expecting a formulaic narrative structure nor am I expecting a show-stopping grand finale with crazy pyro. My problem with Rivers of Light is that its flow is unnatural and it sort of fizzles out after the second half drags on for a bit. I cannot speak to whether the show would’ve been better with the longer 22-minute runtime, but the soundtrack certainly is better in that version. 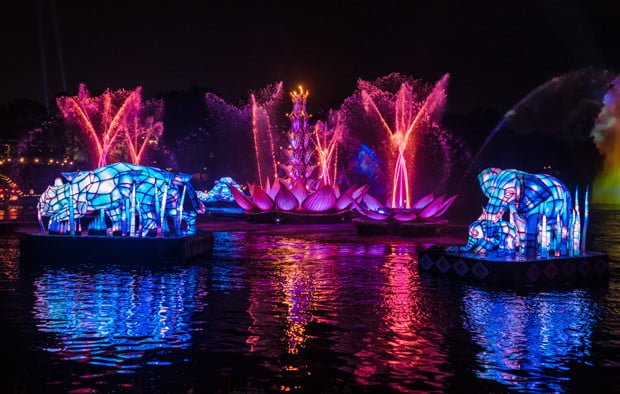 In Rivers of Light, about half of the show remains after what seems like the climax. Some people will be able to look past this, enjoying the rest of the show for what it is: a beautiful mixture of music and colorful visuals. However, it’s understandably an issue for others, since the show bucks narrative convention (and in so doing, guest expectations) for no particular reason. It just sort of sticks around, running out the clock for another ~7 minutes.

Even as someone who could watch IllumiNations every single night and never get sick of it, I felt the second half of Rivers of Light dragged a bit…and that was on my very first viewing. I feel like my tolerance for this sort of experience is pretty high, and even I will probably not make a regular point of watching Rivers of Light. I enjoyed seeing it, and will probably see it once every few trips (until it’s inevitably replaced by something with characters), but I’m perfectly content with occasional viewings as a “refresher” on the full soundtrack, which is in my regular rotation on iTunes. 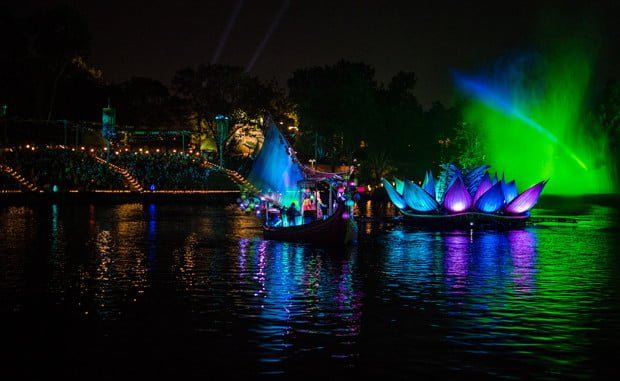 Alright, now let’s talk Rivers of Light strategy. If you do elect to see Rivers of Light, the good news is that it’s now much easier to get a last-minute seat. Early reviews of Rivers of Light focus on the difficulty of scoring a FastPass+ and the lengthy standby waits. Those are both things of the past, existing in the days before Pandora opened, drawing the majority of Animal Kingdom guests to the other side of the park at night.

Even with Rivers of Light being shown once nightly (versus twice when it debuted), it’s fairly easy to grab a last-minute spot without having FastPass+. There are nights when the theater does not fill to capacity, so you can score a good view literally as Rivers of Light is beginning. If you want to play it safe, another option is a same-day FastPass+ after using your initial allotment. I’ve noticed they’re often available until (at least) noon.

I would not recommend reserving a FastPass+ for Rivers of Light in advance of your trip. This is true even if you’re visiting Walt Disney World during a busier time of year when same-day FastPass+ might not be available for Rivers of Light. Getting one really handcuffs you in terms of same-day FastPasses for other attractions, and you’ll likely want one for Expedition Everest, DINOSAUR, and Kilimanjaro Safaris, in addition to Avatar Flight of Passage (preferably) or Na’vi River Journey. 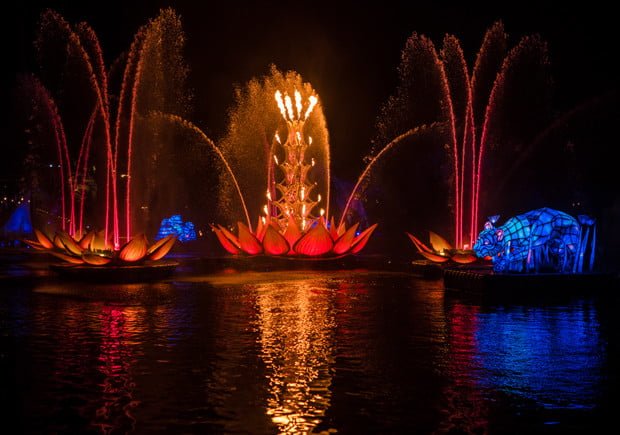 Perhaps the biggest problem with seeing Rivers of Light, and likely part of why its popularity has waned (aside from poor word of mouth) is because of the opportunity cost. Currently, seeing Rivers of Light will preclude you from jumping into the standby line for Avatar Flight of Passage or Na’vi River Journey at the end of the night when waits are shortest, or just spending the evening in the bioluminescence of Pandora. (In our Ultimate Guide to Pandora – World of Avatar, these are all things we recommend.)

If you’re a first-timer, doing something in Pandora is probably a better use of time for 95%+ of visitors to Animal Kingdom. In fact, this is why it took us so long to see Rivers of Light. On our last two trips, our focus had been trying to enjoy the ambiance of Pandora at night, and do those attractions with shorter waits.

Do you agree or disagree with our take on Rivers of Light? If you haven’t seen it, are you looking forward to Rivers of Light? If you’ve already seen it, will you make a point of seeing it again? Any questions we can help you answer? Hearing feedback about your experiences is both interesting to us and helpful to other readers, so please share your thoughts below in the comments!

46 Responses to “Rivers of Light Review”