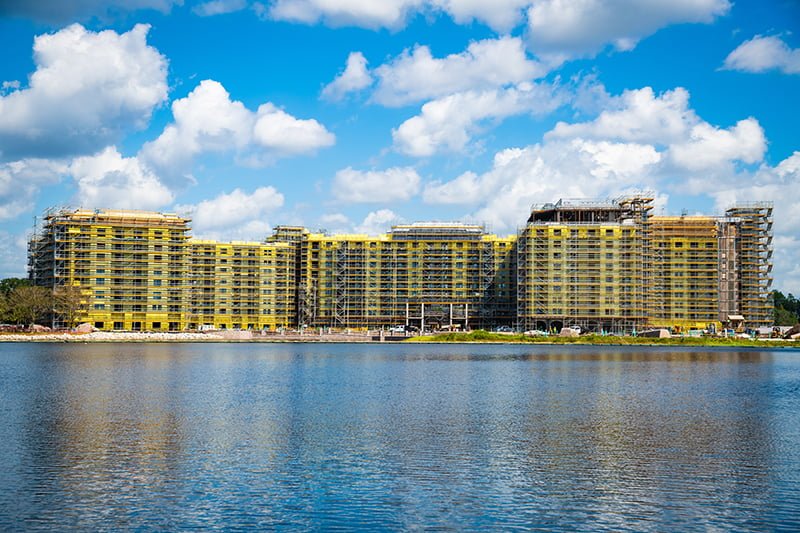 We return to the Riviera Resort as we continue our 2018 Walt Disney World construction updates, this time for a look at progress on the new Disney Vacation Club property being built on the shore of Barefoot Bay across from Caribbean Beach.

It’s been a while since we dropped in on the progress at Disney’s Riviera Resort, so a quick recap. This will be the 15th Disney Vacation Club property, and will have approximately 300 units spread across a variety of accommodation types. The Skyliner gondola system will be Riviera Resort’s key amenity and selling point, connecting it to Epcot and Disney’s Hollywood Studios, along with other hotels.

The layout here is a single tower of 300 rooms rather than a main lobby surrounded by clusters of smaller outlying buildings. Riviera’s style is similar to the tower at Coronado Springs, except shorter, wider, and more offset from the existing resort. That should make it blend a bit better with Caribbean Beach, but the height difference is still a bit jarring.

In response to our last Disney’s Riviera Resort construction update, a few readers speculated as to whether this would have more ‘moderate’ pricing than other recently-opened Disney Vacation Club resorts, given that it’s adjacent to Caribbean Beach and not a Deluxe Resort.

Don’t count on it. This is not the Caribbean Beach Resort DVC wing that was rumored a few years ago. We assume that the main reason it is being built adjacent to (and on part of the former grounds of) Caribbean Beach is due to the layout of the Skyliner, and so that the Riviera’s station can serve some guests at Caribbean Beach who would otherwise have a long walk to the main station.

Despite its proximity to Caribbean Beach, the Riviera is very much a standalone resort. That’s evident from the name, and the (undisclosed) ‘riviera’ theme. Think of these two resorts as more akin to the Grand Floridian and Polynesian–not in status, but in being adjacent resorts with different themes that have views of one another.

As for pricing, expect Disney to charge as much as the market will bear. Disney Skyliner gondola access to two parks, including “the Star Wars park” will be a huge selling point that no other DVC resort offers. For many potential buyers, that will compensate for a lot, including a potentially bland theme.

Direct sales of DVC have cooled over the past few months, but that’s not necessarily indicative of a larger trend. At some point, we expect a sustained slowdown, but that could be a few years away.

When Riviera Resort goes on sale (likely sometime next summer), we would expect the per point cost to be in the $190 range–perhaps even eclipsing $200. If sales aren’t strong at that price, we anticipate Disney using incentives and discounts, rather than dropping the price. (Base prices at Walt Disney World generally only go in one direction, with discounting the preferred method of effectively decreasing prices.)

Suffice to say, we anticipate the draws of the Skyliner and Star Wars: Galaxy’s Edge access to be big. While immersive, highly-themed environments are more to our taste (and this resort looks like it could be understated thematically with a generic riviera style) not every potential buyer is like us.

Of course, we could be totally misjudging Rivera Resort. Disney could be aiming to build a more affordable Disney Vacation Club resort with lower prices or point charts. We doubt it, though. When is the last time you said to yourself, “that’s far cheaper than I expected” when Disney announced the price-points for something? 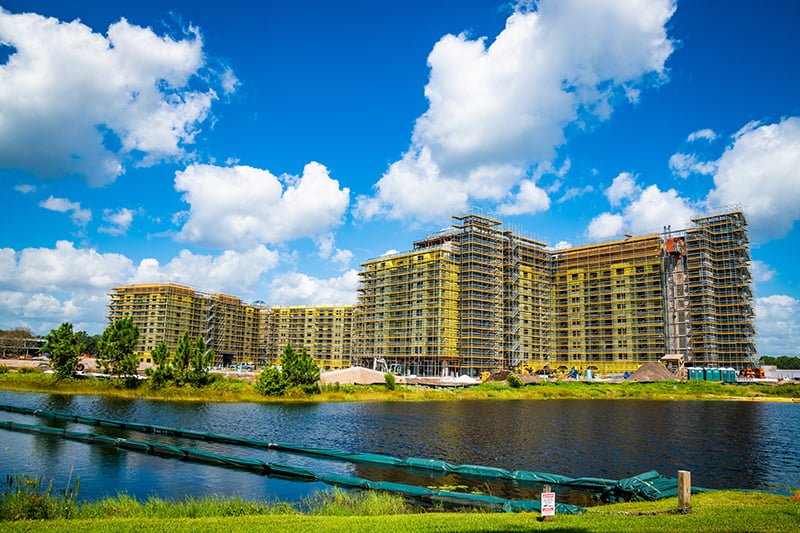 Here’s the view from the shore in Martinique. This area of Caribbean Beach and Aruba are the most impacted by construction in terms of seeing and hearing the work, but it’s visible and audible from just about everywhere–save for Trinidad (formerly Trinidad South).

If you want a look at the current progress on other projects around Caribbean Beach, look no further than our Caribbean Beach Resort October 2018 Construction Update. 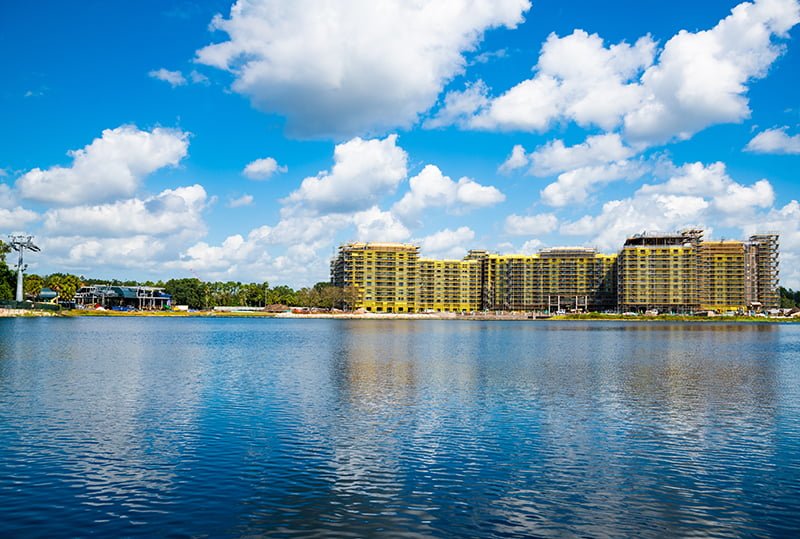 Here’s a wider view, with the Skyliner gondola station pictured to the left.

Progress is similarly far along on the reverse side, including the huge porte-cochere. We saw this several times will traveling too and from the Custom House (the future of which is unclear–we doubt the Riviera will use it for any guest amenities, but it could become an office or back-of-house facility.) 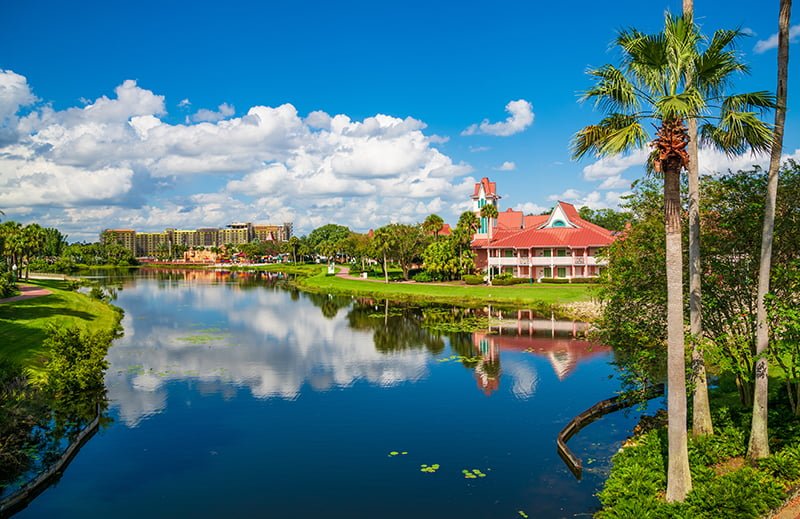 Here’s a look at the construction from more of a distance. In the foreground to the right is Barbados (formerly Trinidad North).

In the middle of the frame are Fuentes del Morro Pool and Caribbean Cay, pretty much directly in line with Riviera Resort. 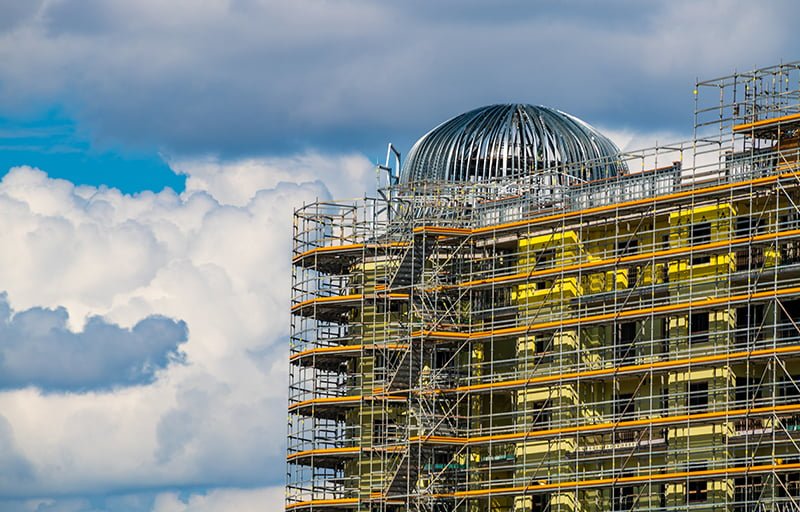 Now that the building is topped out, flourishes are being added to give the exterior some personality.

There are a couple of rotundas like this, and it’ll be interesting to see what purpose they serve. 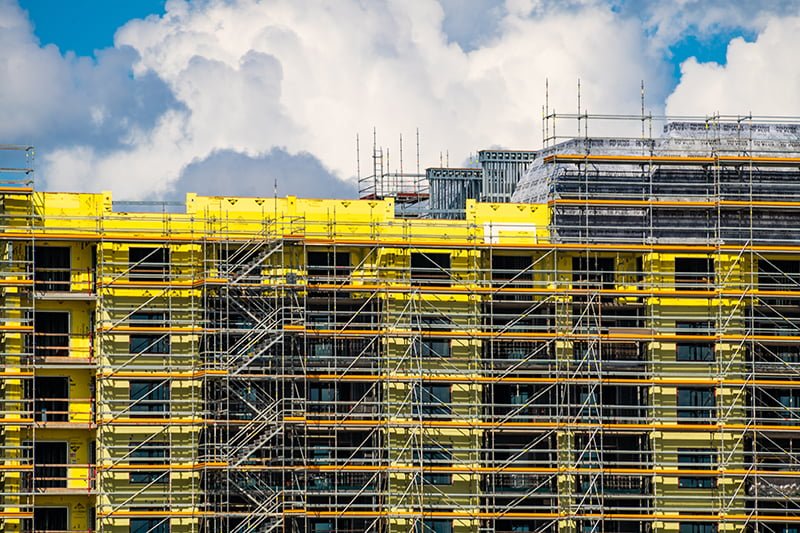 There’s no indication what kind of texture, color, or styles any of this ornamentation will take on once finished, and riviera is pretty open-ended in terms of architectural influences.

Hopefully this is narrowed down to a more precise theme, and it doesn’t look too generic. The concept art doesn’t exactly instill confidence. I guess we’ll find out in a few months once more of the architectural finishing starts to take shape!

Have any thoughts about Disney’s Riviera Resort? Any guesses as to per point pricing when this DVC resort goes on sale? Is this tower-style location with Skyliner access to Disney’s Hollywood Studios and Epcot an attractive to you? Any questions we can help you answer? Hearing your feedback is both interesting to us and helpful to other readers, so please share your thoughts below in the comments!