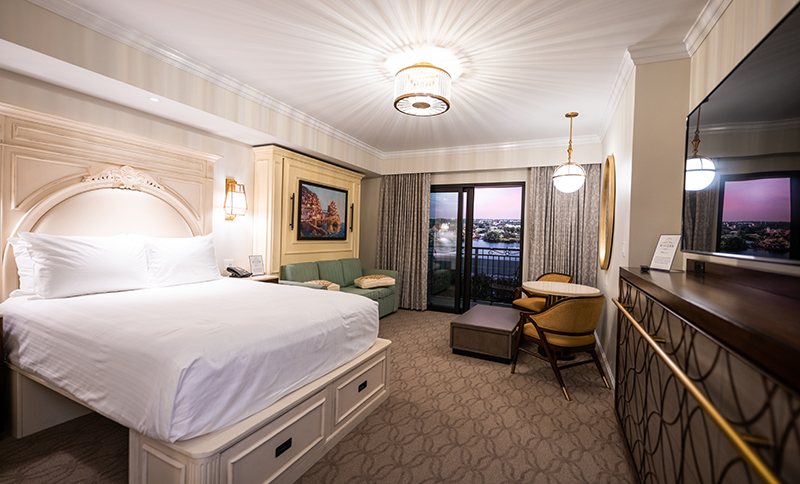 Tours of Riviera Resort studio and 1-bedroom villa rooms are now being offered at Walt Disney World! The Disney Vacation Club Preview Center at Saratoga Springs Resort has these model rooms, and we had the chance to do a group tour this week. In this post, we’ll share room photos and offer some commentary.

If you’re interested in seeing the model rooms for Disney’s Riviera Resort, tours are available at 2 p.m. and 3 p.m. or by appointment. As of right now, they are only for existing Disney Vacation Club Members, but I’d imagine that will change by next week. (If you’re a non-member interested in a tour, simply ask a Cast Member at one of the DVC kiosks in the parks.)

Those who have followed our regular updates on Disney’s Riviera Resort know we are not exactly fans. We’ve mainly been critical of the lack of theme and generic exterior, which has been fairly consistent since the Announcement of Disney’s Riviera Resort. Suffice to say, we were pleasantly surprised with the model rooms we toured…

For starters, if you’ve never been to the Disney Vacation Club Preview Center at Saratoga Springs, it’s quite impressive. It has an inviting lobby, beautiful atrium, and emotional promo videos playing on loop. I swear that whole place has been meticulously engineered to get you to drink the Kool-Aid, or for existing owners to get hyped on buying more DVC.

There are multiple full rooms available for tour for resorts currently being sold, and the designs are all the finished product, exactly what you’d see in the actual resort, right down to the hallway carpet, exterior wallpaper, and room numbers. The only thing that’s not accurate is the view from the balcony, but even that’s an impressive simulation.

I’m not going to caption every photo with text that pertains to the corresponding image, but these are presented with the studio photos first, followed by the 1-bedroom villa: 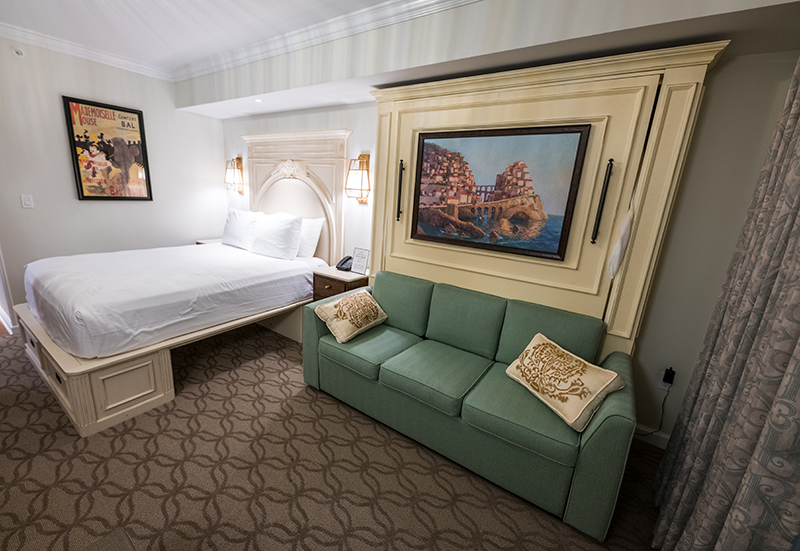 Upon seeing some of the concept art for Disney’s Riviera Resort, we commented that the hotel seemed to being take cues from the Four Seasons Orlando, which we considered to be a favorable and perhaps overly generous comparison.

Seeing the rooms in person only reinforce that. 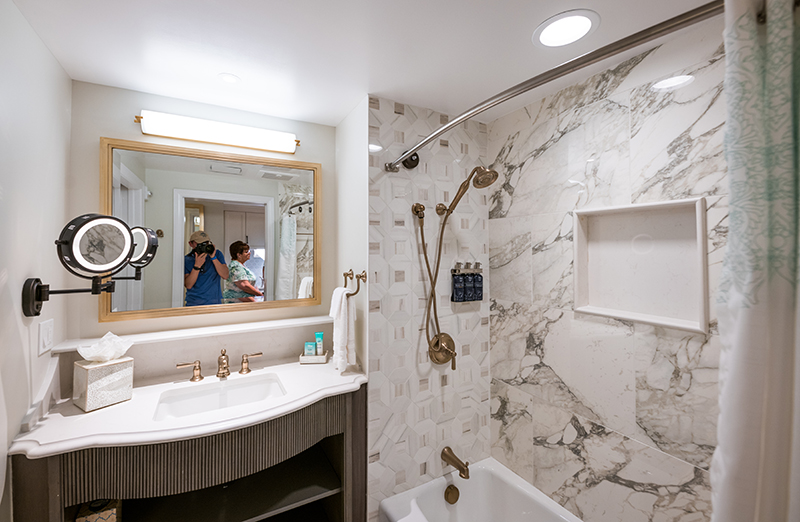 There is a ton of texture and detail to the Riviera’s rooms, and the interior design exudes a stately quality. 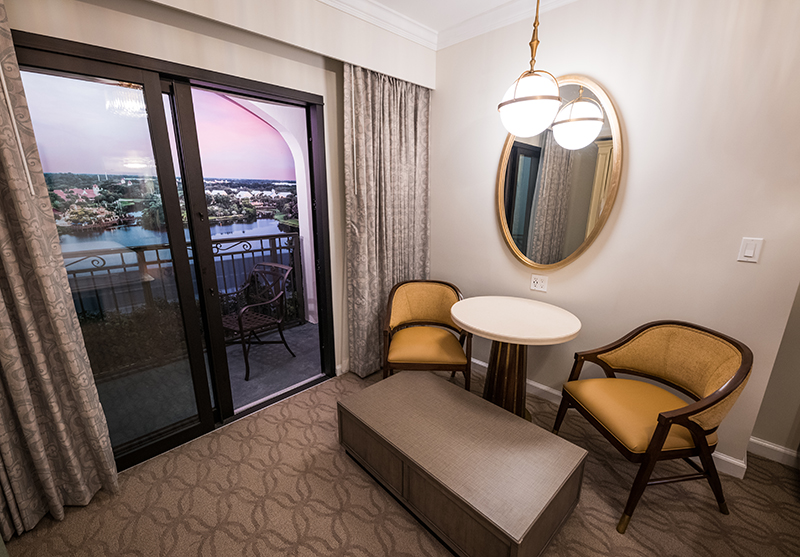 As expected, rooms at Disney’s Riviera Resort do fall short of the Four Seasons Orlando in several regards. 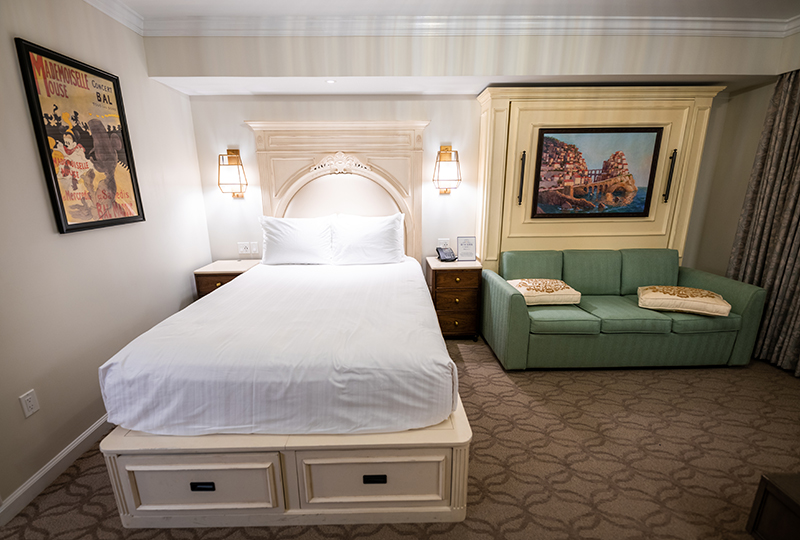 Another disappointment is the lack of any type of bedding beyond the crisp hospital sheets.

I know I’ve been beating this drum often (too often?) when it comes to new Walt Disney World hotel designs, but I mention it here because Disney Vacation Club has been one of the last holdouts when it comes to bed-runners. Copper Creek, for example, still received them in that resort’s new rooms. 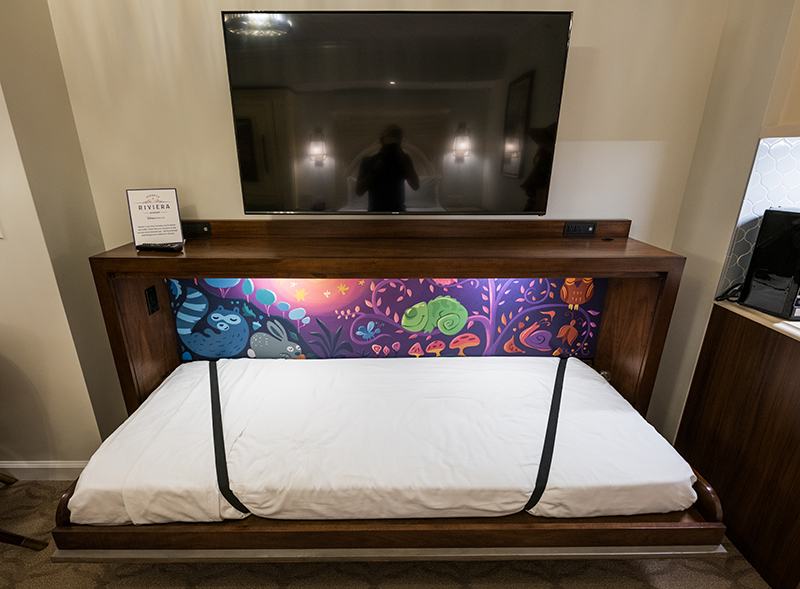 The Riviera’s rooms are fairly consistent with the concept art, but as with many things, are more impressive when you’re standing in them rather than looking at a flat image on a computer screen.

Even with my minor nitpicking, these rooms at Disney’s Riviera Resort impart a sense of European luxury. My first and lasting impression was that the rooms are nicer than I was expecting, and conjure an impression of the (French) Riviera more than I anticipated. 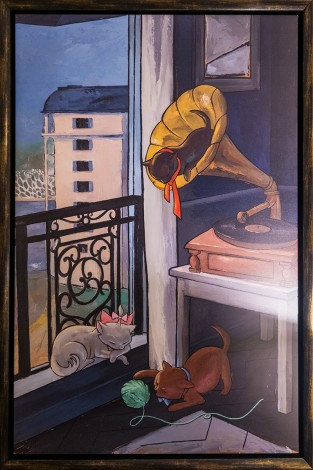 For me, a big part of this is the art. There are 40 unique pieces in total, which should mean that the art will differ from studio to studio. Almost every piece is tastefully done, clever, and pretty. Tastes may vary on that, though.

I rolled my eyes a bit when images of the art that would be used in Disney’s Riviera Resort were released online, as I think art has been a substitute for more nuanced theme…but I’m a total sucker for these pieces. 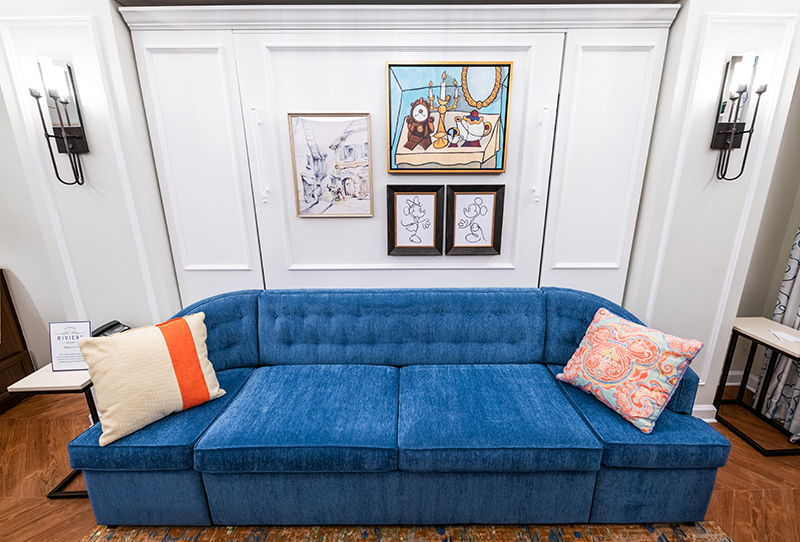 The art takes European art styles and infuses some of them with Disney characters. It’s fun and effective.

It’s also accurate to what we’ve seen in myriad European hotels and vacation home rentals. Perhaps this approach is utilized there because they know tourists love this type of thing, though. 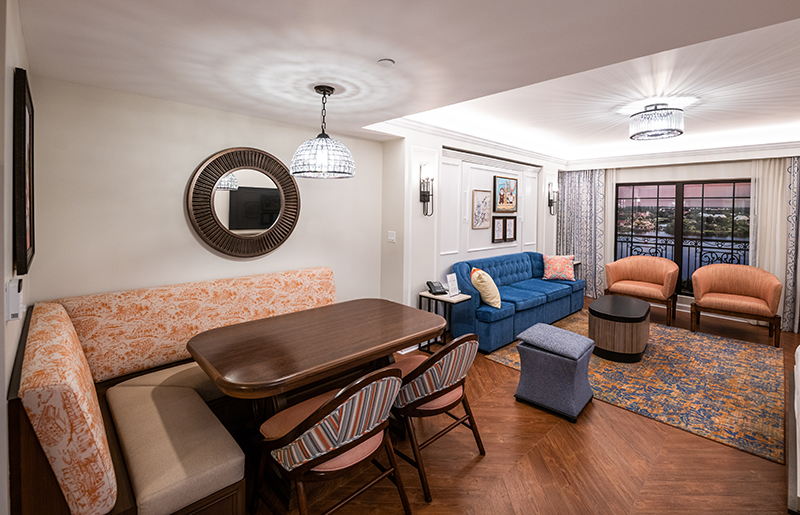 In terms of room sizes, it was tough to get a feel for how these stack up to other Disney Vacation Club resorts. Although I was able to nimbly shoot around them, we were touring with a group that made the rooms feel crowded.

I’m sure this info is available online somewhere, but I’ll make the “bold” statement that the studio felt larger than Bay Lake Tower’s but smaller than the Polynesian’s. If I had to dial it in more specifically, I’d peg it at around the same size as the Villas at Grand Floridian. (This specific info is probably already available online somewhere; I just don’t know where to find it.) 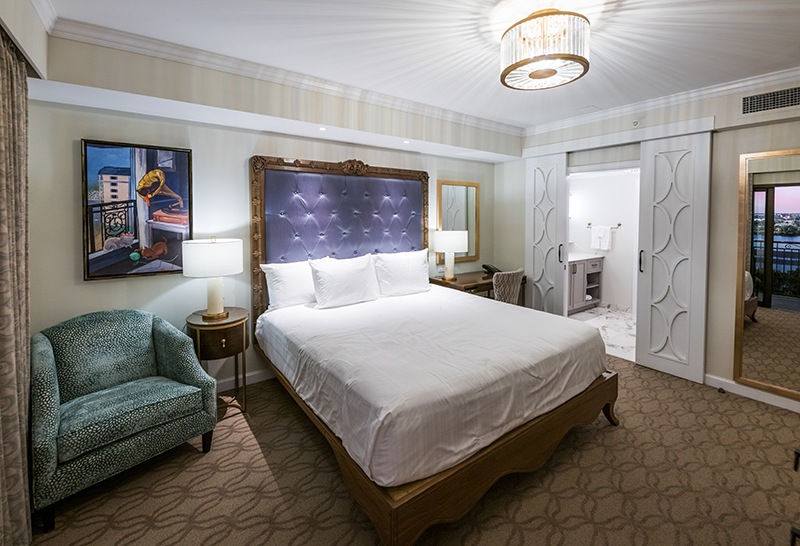 In fact, the Villas at Disney’s Grand Floridian Resort & Spa are probably the most apt comparison to make when it comes to rooms at Disney’s Riviera Resort rather than the Four Seasons Orlando.

I think it’d be fair to call the Villas at Grand Floridian rooms “modern Victorian with a Disney twist.” While those first two terms are arguably contradictory, this is to say that the design there places modern luxury with a light Victorian theme and then interjects some Disney details for fun and whimsy. 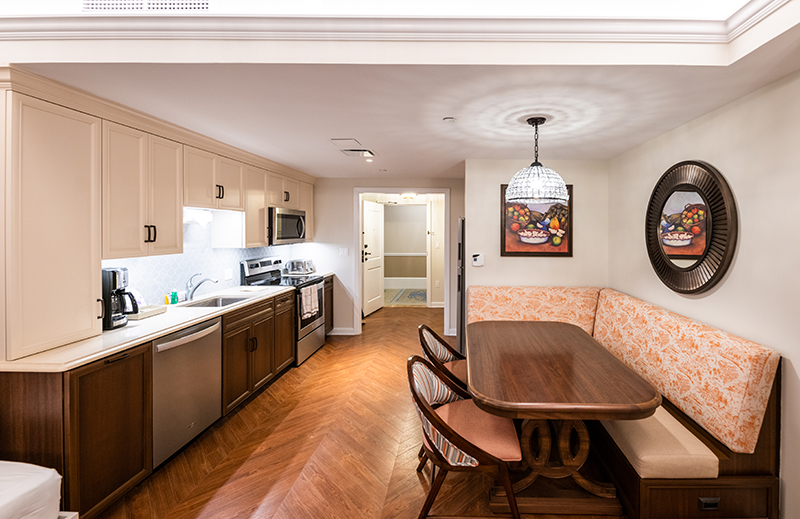 Same goes for the rooms at Disney’s Riviera Resort. The rooms are nice, and designed in such a way that (aside from the bedding), this is going to catch the eye of someone looking for luxurious but not necessarily highly-themed accommodations.

The finishings here are generally nice, and evoke a European sensibility, but I’d stop short of calling this Riviera-themed. Throughout the resort (at least in the concept art), there are too many competing styles to say this resort has a cohesive theme. 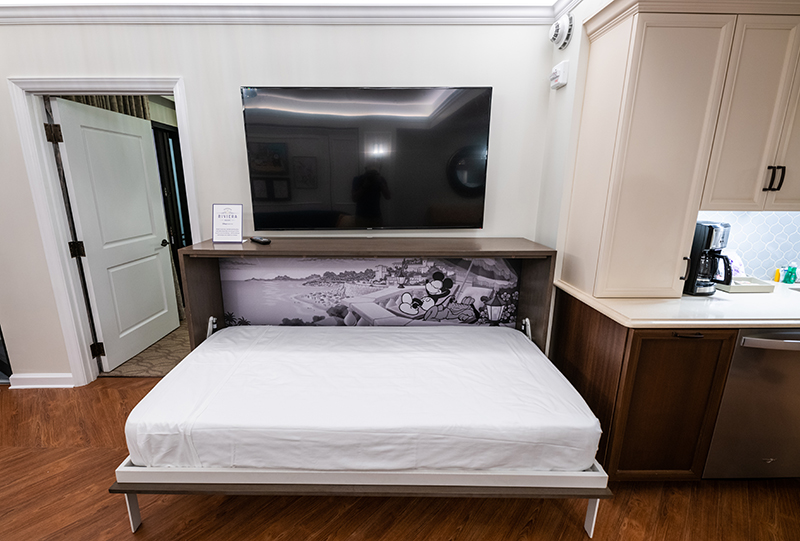 As nice as this all is, that’s unfortunate. We still really wish more effort were put into the exterior design and theme of the resort. There’s so much potential in a riviera-themed resort, and plenty of room for a lavish and luxurious resort.

Disney’s Riviera Resort could’ve been a beautiful Belle Epoque resort with stunning ornamentation and design flourishes, but instead the exterior is a cookie-cutter big box with Mansard roofs. 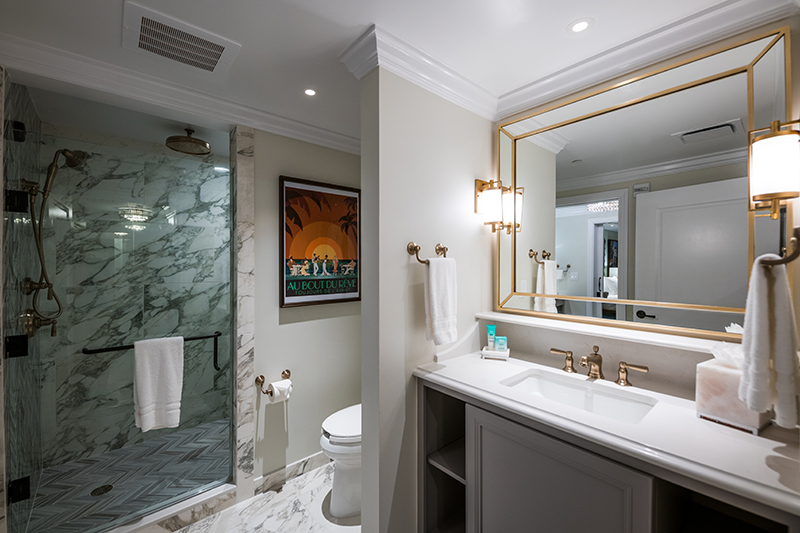 We recently spent a couple of weeks in the French Riviera, visiting some of the same places that Lillian and Walt Disney visited.

The irony of how Disney has been attempting to market the Riviera Resort via the travels of Lillian and Walt is that the places they visited are nothing like this resort. 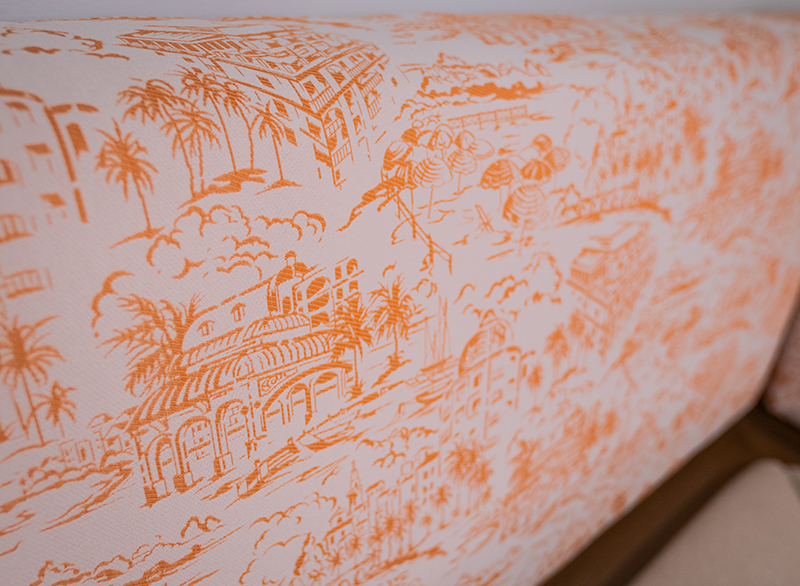 Take ChÃ¢teau de la Chèvre d’Or, where the Disneys stayed while visiting Ãˆze, a hilltop commune. This medieval village would’ve been the perfect inspiration for the resort, as it’s like a little time capsule that itself feels like themed architecture in the real world.

Other architecture of the French Riviera is varied, with a variety of styles depending upon when things were built (lots of lavish Art Nouveau) but few boxy luxury resorts with only Mansard roofs as ornamentation. 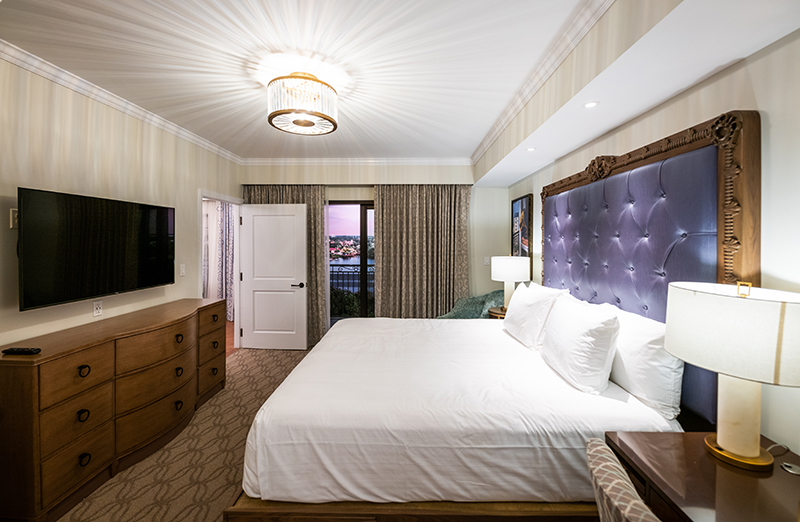 None of that has anything to do with the interior design inside the guest rooms at Disney’s Riviera Resort, so perhaps that’s critique better reserved for a future post about the finished hotel.

Or perhaps, as with these villas, I’ll be pleasantly surprised by the finished product, and have to walk back some of my previous criticism. Anything could happen, I suppose. 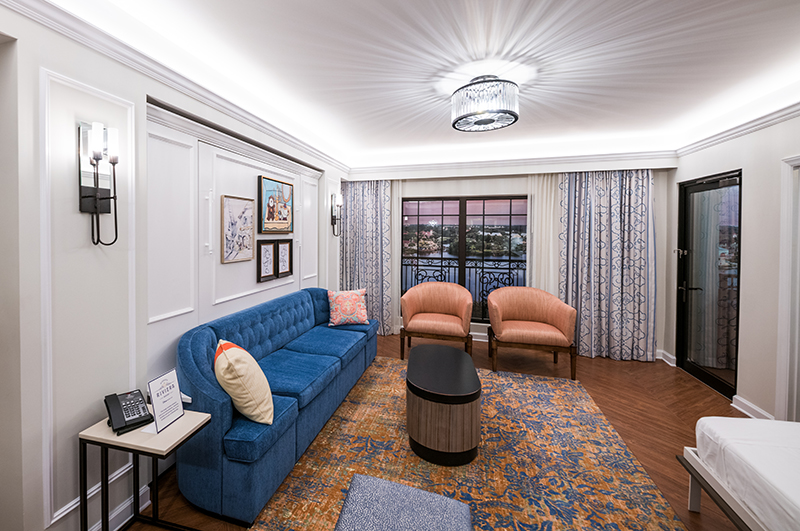 Ultimately, we both ended up liking the studio and 1-bedroom units at Disney’s Riviera Resort far more than we anticipated. Maybe some of this is the excitement of seeing something new, but I don’t think so. These rooms are well-appointed, have some cute Disney touches, and the craftsmanship generally seems high.

When you add these rooms to the robust slate of dining options, Disney Skyliner gondola transportation to two parks, and the pool areas, there’s a decent chance the Rivera will be an impressive property. Perhaps I’ve underestimated this resort, and together with Caribbean Beach (where we already spend a lot of time), the “Barefoot Bay Resort Area” will become the next high-profile hotel hangout spot at Walt Disney World. Stranger things have happened.