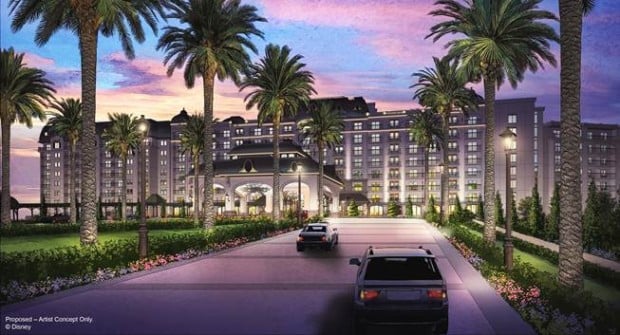 The 15th DVC property will be Disney’s Riviera Resort, which will be added to Walt Disney World’s new Skyliner gondola line, adjacent to Caribbean Beach, a Moderate tier hotel. This new Disney Vacation Club property is currently being built, and work appears ahead of schedule. (Last updated April 26, 2019.)

With Disney’s Riviera Resort slated to open in December 2019, a lot of work remains to be done both inside and outside the resort. However, we were able to see the finished rooms in April 2019, and share the experience in our new Photo Tour of Disney’s Riviera Resort Rooms from our walk-through of the studio and 1-bedroom units. Suffice to say, these rooms look better in person than Disney’s concept art.

The other big news is that Disney’s Riviera Resort is now accepting bookings for December 2019! As you can see in our New Details & Reservation Info for Disney’s Riviera Resort, images of the guest rooms, lobby, and rooftop restaurant have all been released. Walt Disney World has released a ton of new info and images, so be sure to check out that post! We also discuss the resort’s style (similar to Four Seasons Orlando), price points, and new category of rooms exclusive to the Rivera Resort.

You can also take a look at our Disney Skyliner Gondola Update, which shows how the Riviera’s biggest selling point–gondola transportation to Disney’s Hollywood Studios–is coming along. Now, for the official details that have been announced about Disney’s Riviera Resort… 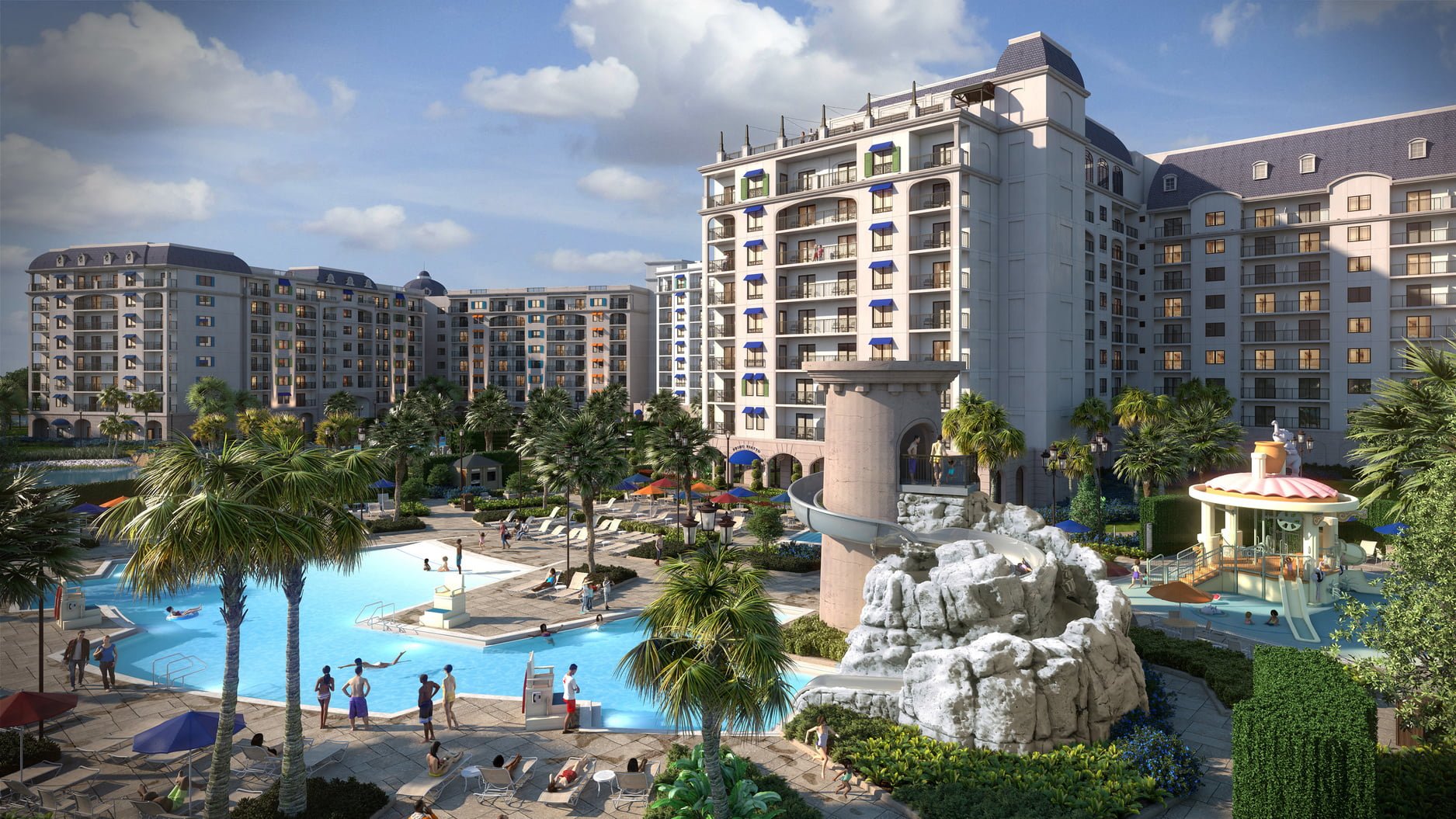 Bob Chapek, Chairman of Walt Disney Parks and Resorts, announced the next planned development during the D23 Expo, and shared a few details and concept art for the project. The main detail he shared was that the resort would feature a rooftop restaurant with views of both Epcot’s and Disney’s Hollywood Studios’ nighttime spectaculars.

Since then, Disney has announced that the Riviera is inspired by the European grandeur Walt Disney experienced in his travels along Europe’s Mediterranean coastline. Disney Riviera Resort is slated to open in Fall 2019, with approximately 300 units spread across a variety of accommodation types. 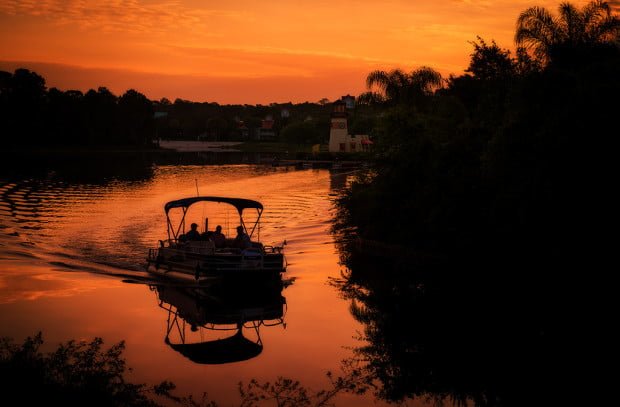 My guess would be that the association of a Disney Vacation Club resort with a Moderate Resort would not sit well with a lot of DVC Members, and Disney knows this. Caribbean Beach Resort won’t be a Moderate Resort when this is all finished, and Disney Riviera Resort is likely to share at least some facilities with Caribbean Beach, but I guess it’s all about the marketing pitch.

It will be interesting to see what efforts are made to make Disney Riviera Resort and Disney’s Caribbean Beach Resort distinct from one another, and where they’ll share facilities–or at least encourage use of those at their “sister resort.” Previously, my assumption was that this resort would lack a feature pool on par with Fuentes del Morro Pool, and likely wouldn’t have a slate of dining options like Caribbean Beach, either. 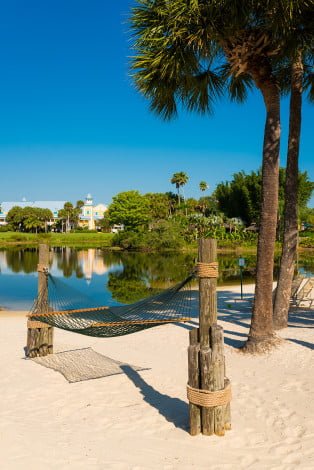 My assumption was that this was at least partly motivating the huge refurbishments to give Caribbean Beach a more upscale waterfront area. The other part of the motivation is unquestionably the Skyliner, which will instantly elevate all of the resorts it connects in status. (This is why Caribbean Beach Resort and Pop Century are both receiving upgrades.)

As for Disney Riviera Resort itself? Eh, it’s difficult to judge on a single piece of concept art, but that art to me looks no different from what you might see for a Homewood Suites or something of that sort. It does not scream “themed” to me. Heck, it does not even whisper “themed” to me.

I worry that this is the direction Disney Vacation Club is heading, and recent room refurbishments have reflected a trend towards more generic styles. I’m not at all a fan of the changes at the Beach Club Villas, and the Boardwalk Villas have a similar problem with looking too generic for my tastes.

To be honest, I don’t know whether these generic styles are a more crowd-pleasing design as Disney Vacation Club tries to appeal to a more mainstream audience that may not necessarily care about theme in their hotel room–or are fine with light character touches and hidden Mickeys. I don’t want to generalize too much, but for some newer Disney fans, it seems that throwing a Mickey print in a picture frame makes a room themed.

Alternatively, maybe theme does matter to the bulk of Disney Vacation Club members, but these new room styles are the path of least resistance. Easier, cheaper, and without as much need for frequent updates to keep them fresh.

My bet would be that the reality is somewhere in the middle. I think Disney got a bit heavy-handed with room interior themes in the mid-2000s (the rooms at Wilderness Lodge were garish–the redesign a couple of years ago is a much better balance), and what we are now seeing is an over-correction based on guest feedback. I think a new round of guest feedback will reveal it’s now too subdued. At least, that’s my hope.

As this related to Disney Riviera Resort…it’s really too early to tell. Again, it’s just a single piece of concept art. From that and the trends in interior design, I think there are some things we can safely infer, but I’m willing to reserve further judgment until Disney Vacation Club releases more information about Disney Riviera Resort. I’m hopeful that it is themed…and themed in a way that is complimentary to its sister resort across the water.

What are your thoughts about Disney Riviera Resort? Are you cautiously optimistic, disappointed, or is it too early to tell? What, if anything, do you think this new resort will share with Disney’s Caribbean Beach Resort? Any questions about this new DVC development? Hearing from you is half the fun, so please share your thoughts in the comments below!