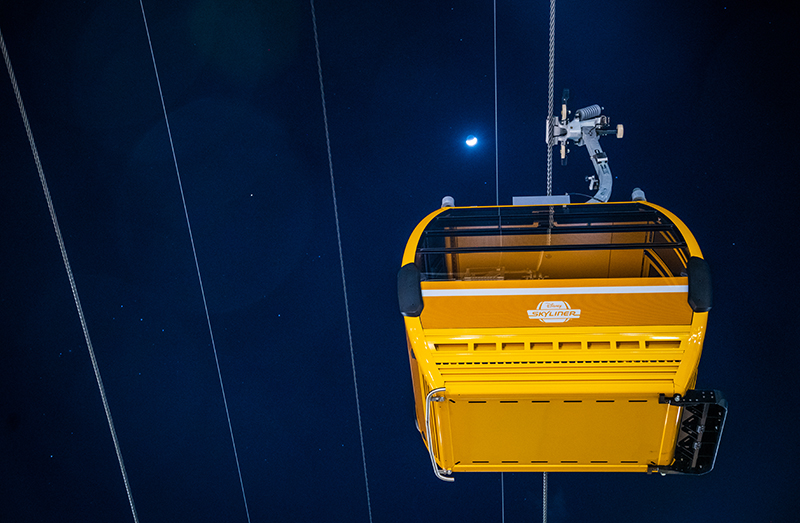 Our Walt Disney World construction updates & photo reports continue with the Skyliner gondolas, including video of the tests above Caribbean Beach Resort. We also have progress on all Skyliner stations: Hollywood Studios, Epcot, Caribbean Beach, Riviera Resort, and Art of Animation/Pop Century.

Let’s start with some thoughts on when Disney’s Skyliner gondolas will debut for guest use. Initially, the safe bet was that the Skyliner would debut at roughly the same time as Star Wars: Galaxy’s Edge in Late Fall 2019. Once the support pillars started going up last summer and swift progress was made on several of the Skyliner stations, the expected opening date moved forward, with many guessing Spring or Summer 2019.

In our most recent few updates, we’ve indicated that the Art of Animation and Pop Century station looked like it could be ready to open pretty much whenever. However, Walt Disney World announced last November that the Disney Skyliner gondolas would begin transporting guests in Fall 2019. So…what happened, and when do we expect it to open now?

There are a few theories as to why the Disney Skyliner gondola now has a loose Fall 2019 opening target. One is that debuting the Skyliner at roughly the same time as Star Wars: Galaxy’s Edge has been the target all along, and the pace of work has deliberately slowed to match the land’s late August opening date.

This one is superficially plausible. It’s true that the Skyliner will be most needed when Star Wars: Galaxy’s Edge debuts, and this is infrastructure built for anticipated future crowds more so than current ones.

A couple of things make me skeptical of this theory. First, there has not really been a visible slowdown in activity around the Skyliner. Crews are still all around the Skyliner locations at Walt Disney World, they’ve just been more focused on testing.

Second, all of this work is going to fall in the same fiscal year regardless, so there’s no financial benefit to slowing the pace of work. Finally, the sooner the Skyliners are operational, the sooner Walt Disney World can get a lot of buses off the roads, which offers cost-savings. 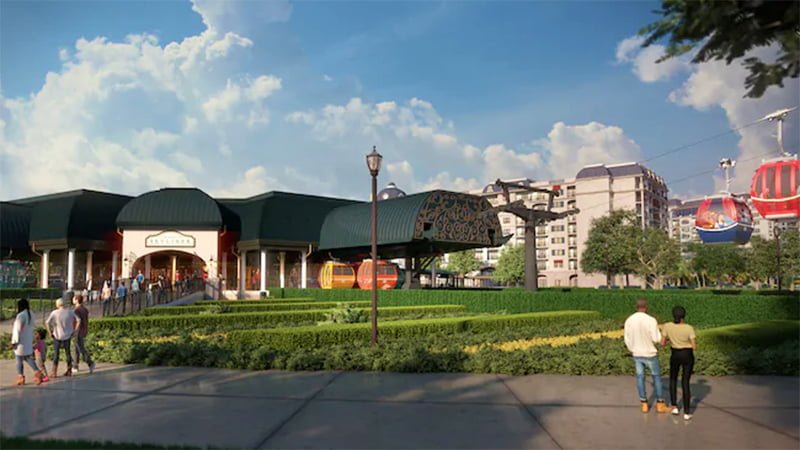 Another theory is that since the Skyliner is an amenity of Disney’s Riviera Resort that will be passed along to Disney Vacation Club Members there via maintenance fees, Disney is hesitant to debut the Skyliner until that resort is open.

I don’t know enough about the arcane nuances of Florida timeshare law to comment on the veracity of this, but I highly doubt it’d be an issue. DVC already prorates dues for the first year of ownership, so that should cover them here. Moreover, it seems highly unlikely that Walt Disney World would wait until mid-December 2019 to start operating the Skyliner. That’s simply too late. 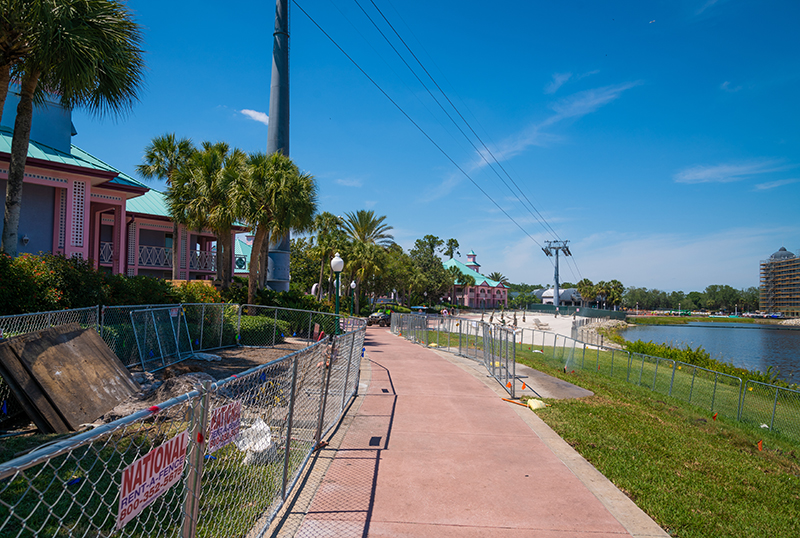 Finally, there’s the theory that elements of construction were not properly undertaken and remedial work is now being performed to fix that work. Reedy Creek needs to sign off on safety, and it’s likely that state and federal regulators do as well. Any one of these authorities could find an issue that needs to be addressed.

As our Caribbean Beach Resort April 2019 Update shows, a lot of work has been occurring there over the course of the last few months to create evacuation routes and provide access to emergency vehicles. Now, this could have been the plan all along, but that seems highly unlikely given that after the support pillars were installed last summer, the areas around them were landscaped and left untouched for several months.

All of this still leaves the question of when will the Skyliner open? If getting safety and regulatory compliance sign-offs is truly the sticking point, that’s a tough question to answer. In that scenario, it’s not totally up to Disney, and unforeseen problems could further delay the project. (In fairness, this is true of literally every project.)

Nevertheless, our expectation is that the goal is mid-August 2019, at the absolute latest. Walt Disney World is devoting a ton of resources and manpower to the Skyliner project, and will do everything in its power to have the system operational in time for Galaxy’s Edge.

Of course, if you asked us a few weeks ago to predict the drop-dead date for Mickey & Minnie’s Runaway Railway, we would’ve also said “mid-August 2019.” So what do we know. 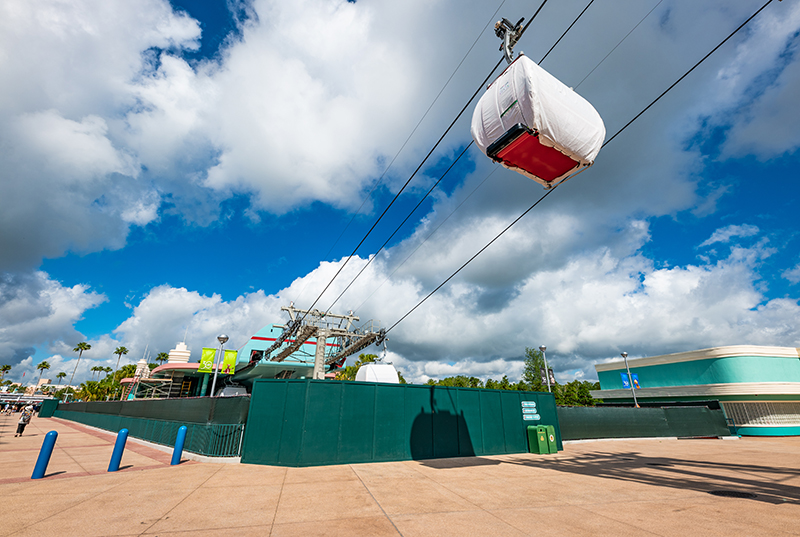 Now let’s turn to the progress updates, starting with Disney’s Hollywood Studios, where the bulk of the testing is being done.

Not much progress on the station as compared to our last visit to DHS. Finishing touches still need to be put on the Pan Pacific Auditorium style columns, but we’d expect those flourishes to be added a few days before the system goes live. Otherwise, this station appears to be in its operational state, or close to it. 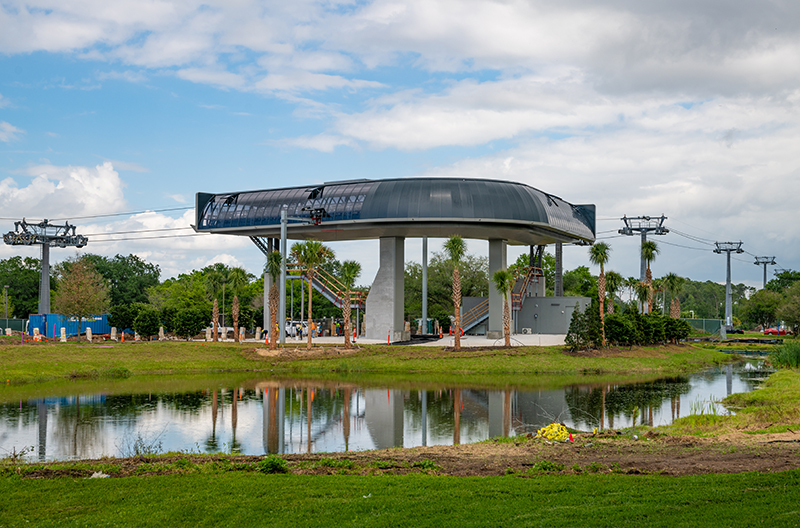 This has been done for months, with the only difference this time being that the wall blocking my unobstructed view from the pathway is down. 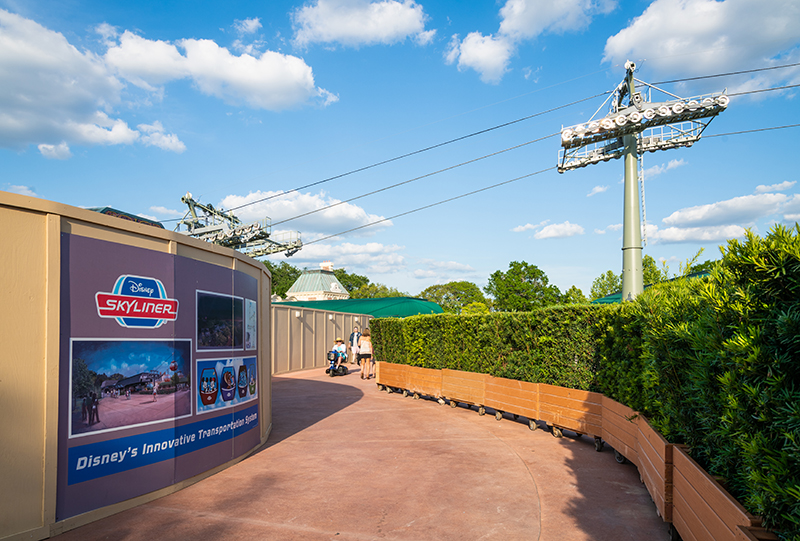 More construction walls have popped up in this area for the reworked bag check and turnstiles, which we walk through in our Epcot Update – April 2019. It appears that this expansion will be done all at once, rather than stages; that should expedite the work and have this area ready to welcome the larger crowds the Skyliner will bring. 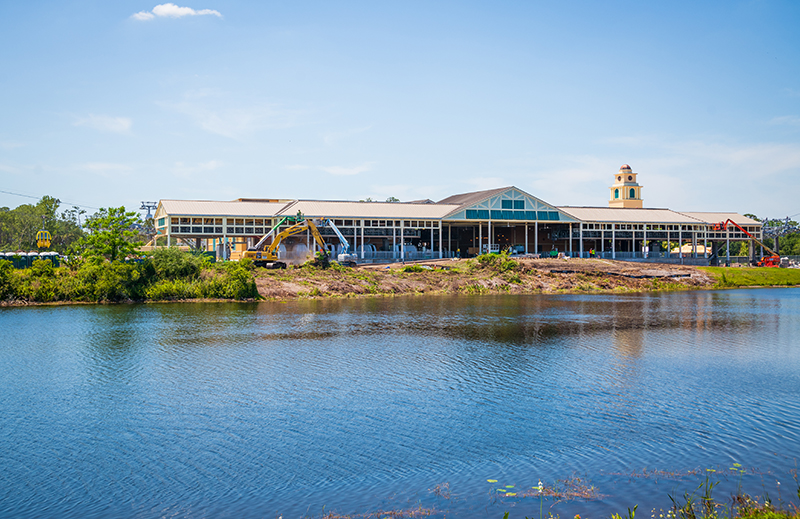 On the resort side of things, the most progress has been made at Caribbean Beach Resort’s major station. This will be the largest of the bunch, and handle the most traffic.

Unfortunately, I couldn’t get a good photo, but there appeared to be several dozen covered Skyliner cabins sitting in a storage bay at this station. 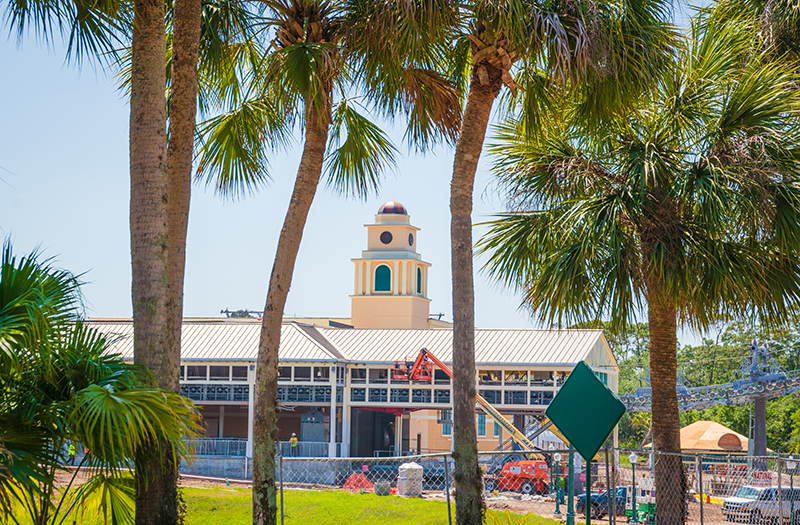 The cupola mirroring other architecture around Caribbean Beach now appears to be finished, with some minor trim-work and other details the only things left to finish here.

On this particular day, both the Art of Animation/Pop Century and Disney’s Hollywood Studios lines were testing.

If you look closely on the left side of the photo above, you can see both. The lower (and larger) cabin is from the AoA/Pop line, while the more distant and smaller 4 cabins are from the DHS line.

We’ve lamented the decision to dot Caribbean Beach’s landscape with Skyliner support pillars over in Jamaica and Aruba, which is a decision someone probably regrets given that routing the Skyliner above the parking lot probably would’ve negated all this emergency access work.

On the other hand, the Skyliner is a nice addition to the landscape on the other side of the resort. Sitting at Spyglass Grill in Trinidad watching those gondolas glide over the water in the distance is relaxing and enjoyable. 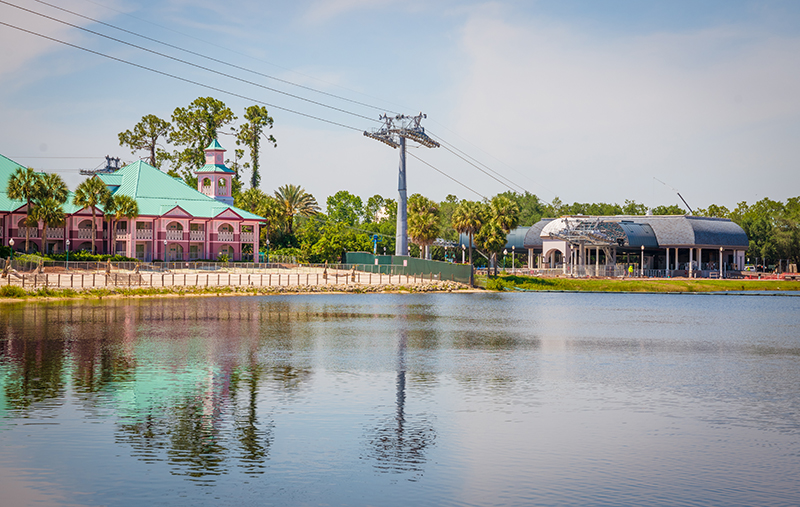 Across the way at Disney’s Riviera Resort, work continues on the station.

While this is technically Riviera Resort’s station, the practical reality is that guests on this side of Caribbean Beach will also use it. I’d be curious to know whether the high maintenance fees of Disney’s Riviera Resort take this into account, or if DVC owners are just footing the bill for the entire thing. 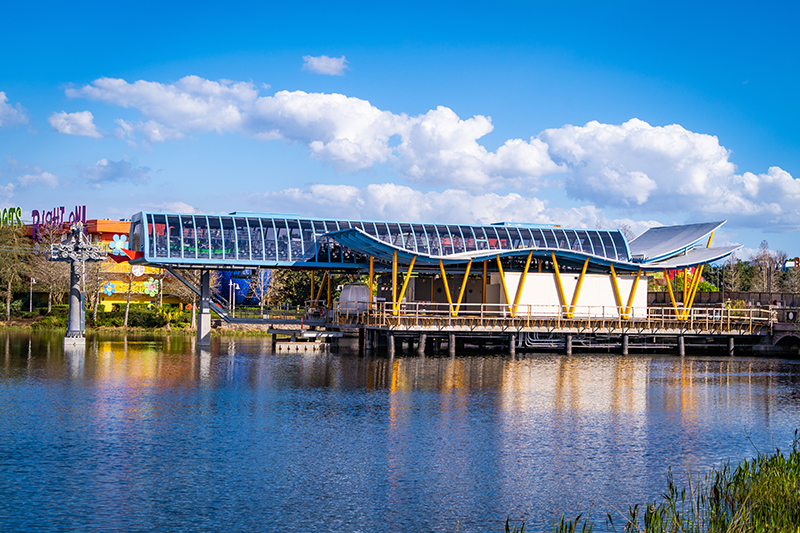 We didn’t visit Art of Animation or Pop Century this time, as there’s not really any further progress to be made there. Nevertheless, above is what the Skyliner station looked like during our last visit…and the visit before…and the time before that. It’s been more or less done for several months now.

That’s it for this update on the Walt Disney World Skyliner gondola transportation network. Given the nearly finished state of most stations, I think the “progress” to really watch at this point is on the ground around Caribbean Beach Resort and wherever else along the route that better evacuation access points have been mandated.

Testing also continues on a daily basis between Disney’s Hollywood Studios and Caribbean Beach, as well as Pop Century/Art of Animation and Caribbean Beach. If all this is able to be wrapped up in an efficient manner, the Disney Skyliner gondola beginning soft opening trial runs this summer is not outside the realm of possibilities. If not…well, hopefully they make it by August 29!

What do you think the reason for delay is on the Skyliner opening…or do you think there’s no delay at all, and Fall 2019 was the plan all along? What are your thoughts on the Skyliner? Does the video of the gondolas in motion have you more excited to see and/or ride the finished Skyliner? Thoughts on construction progress? Any questions we can help you answer? Hearing your feedback–even when you disagree with us–is both interesting to us and helpful to other readers, so please share your thoughts below in the comments!