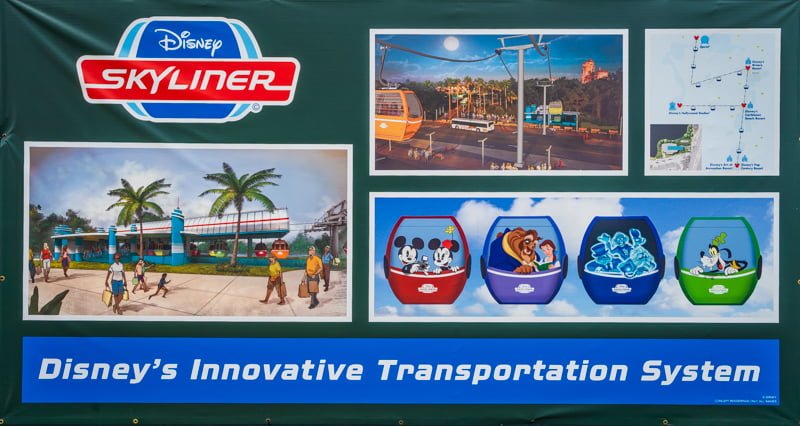 Over the course of our Walt Disney World trip, we took Skyliner gondola station construction photos at Hollywood Studios and Epcot that will connect the parks to four different resort hotels. In this post, we’ll offer a lot of my commentary on the gondola’s impact on sightlines and whether we should care, plus a brief progress report on Walt Disney World’s upcoming gondola network.

With that said, I want to start with the issue of sightlines, as this has been a controversial component of the Skyliner since the first support pillar went up behind the France pavilion a couple months ago.

I went on record years ago with my take on the old Fantasyland Skyway:

I only vaguely remember riding, but the Skyway is one “fan-favorite” I’m glad is gone. Would be great for photos, but also an eyesore.

That’s one of my several negative tweets about the old Skyway (I’m sure I covered it here somewhere, but the search feature of this site sucks), and it was always a contentious position. I mention this now because the Skyliner has caught the ire of fans, despite being far less egregious than the Skyway from any ‘show’ perspective.

Generally speaking, the Skyway is beloved by Walt Disney World fans, many of whom miss it–even though many of them probably also don’t remember it or were too young to remember it. Of course, everything is always more beloved (and flawless!) once it’s gone.

For what it’s worth, I think the Skyliner is very different than the Skyway, most notably to the extent that this new transportation system is not traveling directly over Fantasyland. My concerns with the Skyway were that offered views of the Fantasyland rooftops and buildings that would be considered ‘poor show’ while also being an eyesore for guests below. 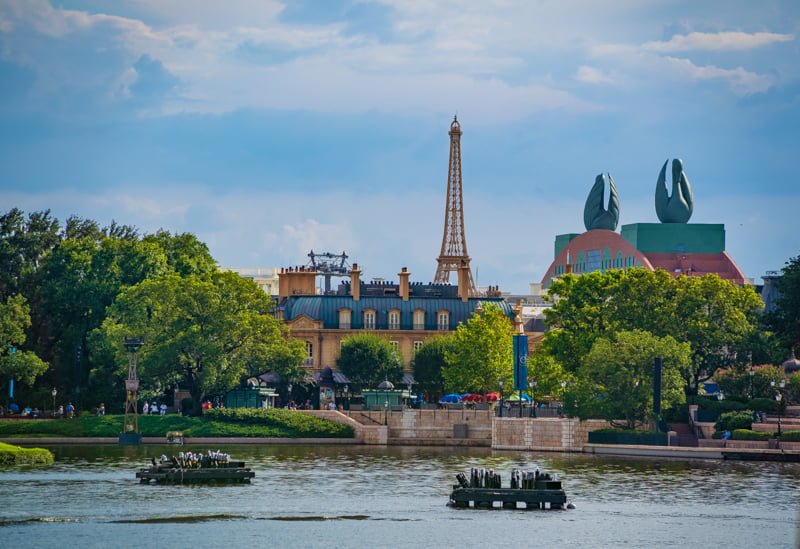 It seems to me that the Skyliner instead raises issues with sightlines, primarily in World Showcase and at a couple of Moderate Resorts. With regard to World Showcase, that ship sailed with the construction of Swan & Dolphin decades ago. Those pyramids that are plainly obvious from around Epcot look like Vegas-style monstrosities and could easily bother you…if you let them.

Even setting that aside, I can’t say I’m especially concerned. The Skyliner is only visible from a distance, and from that vantage, you can also see multiple countries at once. From within France, where actual suspension of disbelief occurs, you can’t see the Skyliner. I would advise those who are outraged to never visit the real Eiffel Tower, as what you’ll see around there is a far cry from Epcot’s romanticized version.

I don’t like being in a position of preemptively defending Walt Disney World here, but I think fans need to pick their battles. “Poor sightlines” seems like a hill an increasing number of fans are eager to die on, but Disney has always been hit or miss with sightlines, even while emphasizing their importance. There are, quite literally, dozens of examples of poor sightlines that date back over two decades, and plenty that date to the so-called golden age of Imagineering.

For me, personally, there is no hard and fast rule concerning sightlines. Sometimes they matter, sometimes they don’t. It’s more of a smell test thing. Generally speaking, the more whimsical or novel two disparate items, the more comfortable I am seeing them together. For example, Sleeping Beauty Castle, the Matterhorn, and Main Street viewed together all work for me. Each is just so unique and fantastical that the collective result congeals and creates something that is ‘distinctly Disneyland.’ 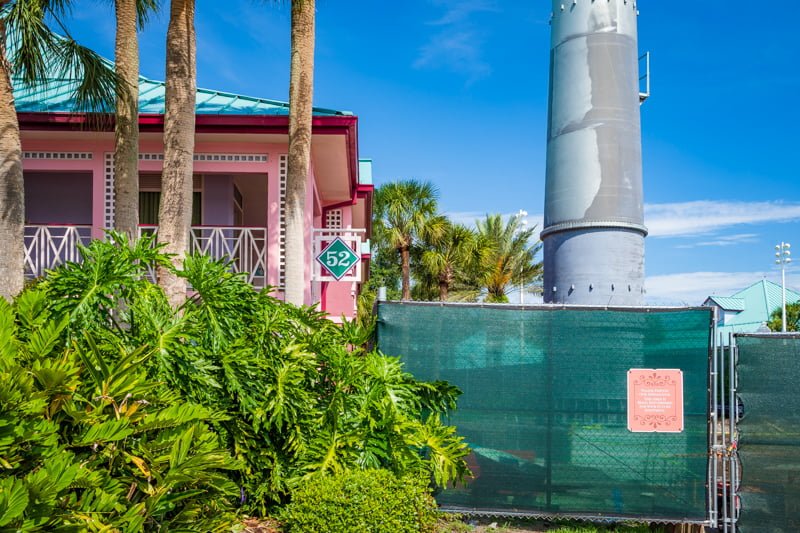 A view of huge show buildings juxtaposed against quaint Fantasyland facades, or support beams and those facades, does not work for me. One item is decidedly utilitarian and the other is whimsical, with the end result snapping you back to reality. That’s my position on the old Fantasyland Skyway. (I do think support pillars mere feet from the laid back Caribbean Beach buildings is jarring, and wish more effort went into locating those supports.)

Gondolas and the Eiffel Tower, or gondolas and whatever you might see in World Showcase, lies somewhere between those two extreme examples. Gondolas are a fairly novel form of transportation, and although World Showcase is replicating real world places, it’s doing so in a somewhat whimsical way. The Skyliner may not enhance the view, but I don’t think it necessarily detracts from it. It seems to me like a neutral thing.

Moving right along to progress, here are some photos from the Skyliner Station at Disney’s Hollywood Studios: 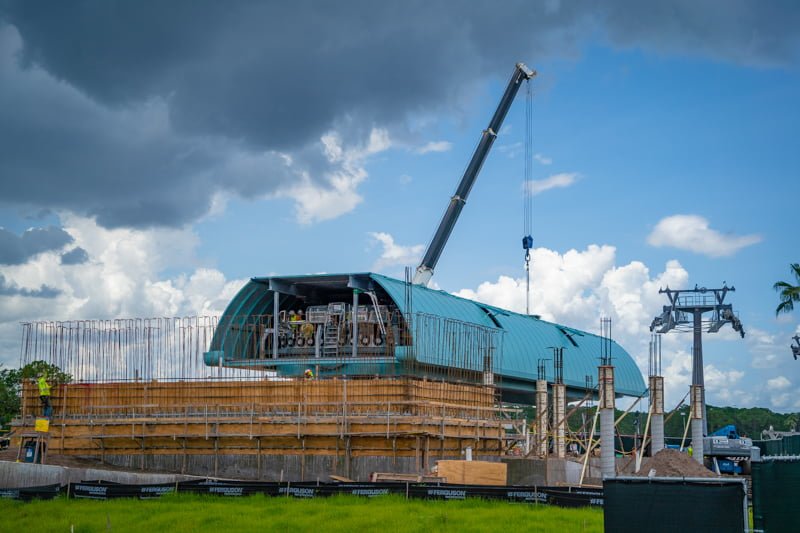 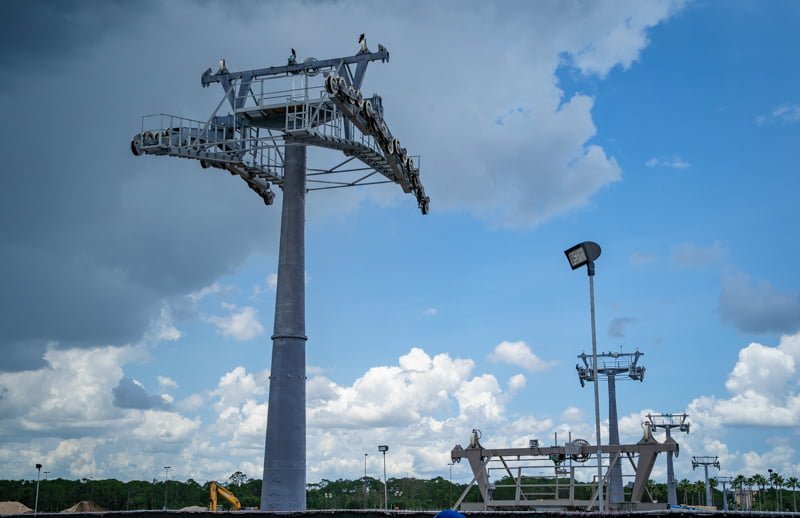 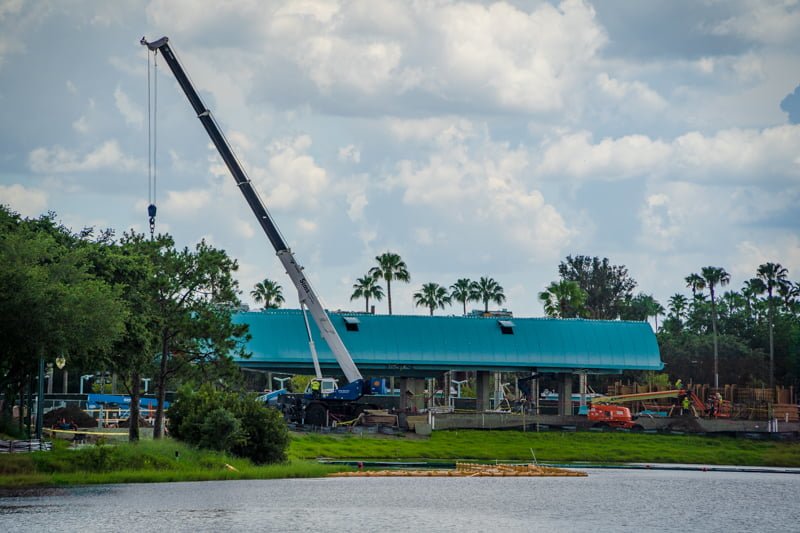 This station is pretty far along, to the point that it could realistically be finished by later this year. The anticipated opening is mid-2019, so don’t get your hopes up on that. Even when all of the stations are finished, other work will remain, along with test and adjust.

I couldn’t get decent photos of the Epcot station as its construction walls are high and trees block the best views from the bridge between Beach Club and Boardwalk. However, what I could see did not look nearly as far along as the station at Disney’s Hollywood Studios.

We’ve already shared some photos from the two stations at Caribbean Beach and Riviera Resorts, but here those are again: 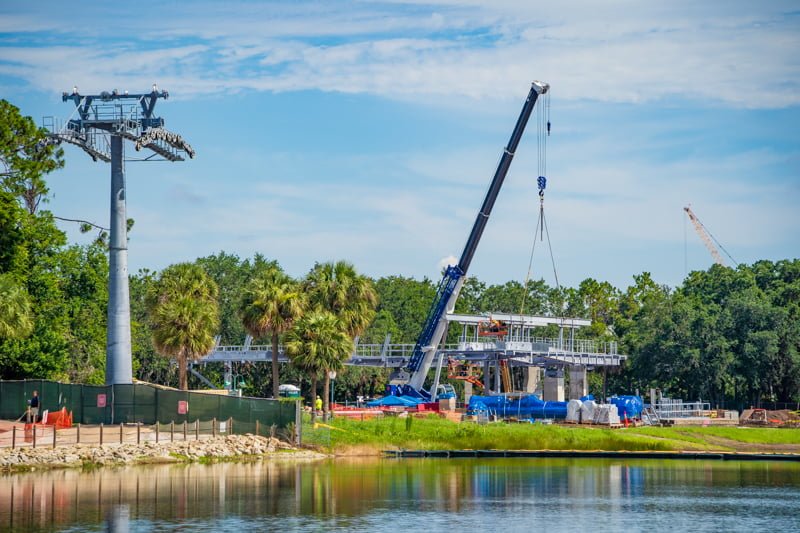 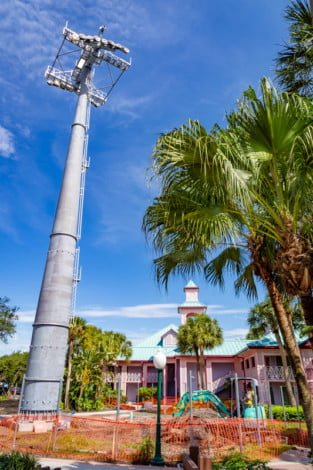 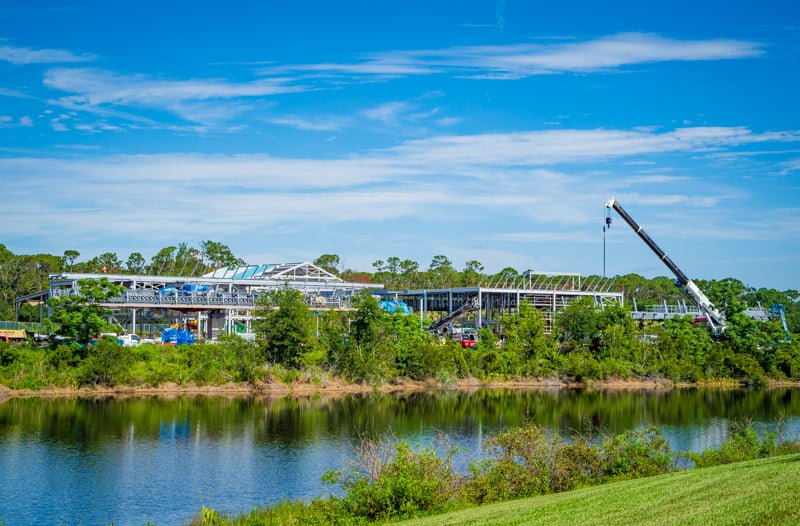 That’s it for this update on the Walt Disney World Skyliner gondola network. I realize this is mostly commentary with not a ton of insight into the current progress of construction, but it’s really difficult to ascertain just how far along this project is based upon progress. Work has been moving at a fairly rapid pace, but that does not mean we’ll see the Skyliner open by Memorial Day 2019. My guess (and this is totally a guess) is that it won’t open until later in the year, with the goal having it up and running in advance for Star Wars: Galaxy’s Edge. Debuting the Skyliner a few months before that would make sense–possibly in mid-September. That’s a total shot in the dark on my part, and could be totally wrong.