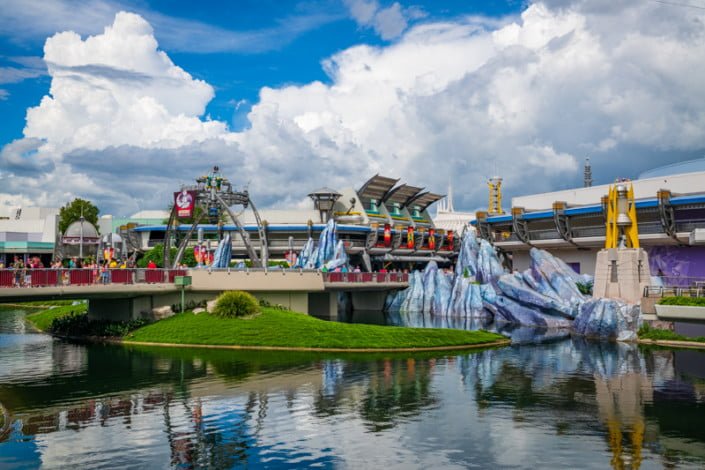 There’s currently a lot going on in Tomorrowland at Walt Disney World. There’s the repainting and aesthetic retouches of the land to prepare it for TRON Lightcycle Power Run, the Incredibles dance party and takeover, and the removal of remnants of Tomorrowland ’94 and the mishmash of other stuff that was layered on top of it.

Suffice to say, Tomorrowland is currently even more of a hodgepodge than normal. The good news, though, is that there’s light at the end of the tunnel. The ‘Incredible Tomorrowland Expo’ is a temporary event that will (hopefully) only last for the summer. The removal of some aspects of old Tomorrowland have been a long time coming, and have improved some areas of the land already.

Then there are the aesthetic retouches, which will hopefully bring some cohesion to a land that has lost its identity over the course of the last couple of decades. Arguably, it’s still in search of an identity even for the future, as some of what’s being done now doesn’t have a clear nexus to the design of TRON Lightcycle Power Run. In this post, we’ll take a photo tour of Magic Kingdom’s Tomorrowland and look at what’s happening right now and what’s changing…

Let’s start with all of the stuff to celebrate Incredibles 2. As part of Walt Disney World’s Incredible Summer promotion running through September 3, 2018, the Incredibles have taken over Magic Kingdom’s Tomorrowland.

Normally, type of thing would just mean the flavor of the month dance party back by the restrooms in the rear of Tomorrowland would have some characters, but this is a bit more extensive. Not only does the Incredible Tomorrowland Expo, feature a dance party, but also Incredibles banners, photo ops, and more. 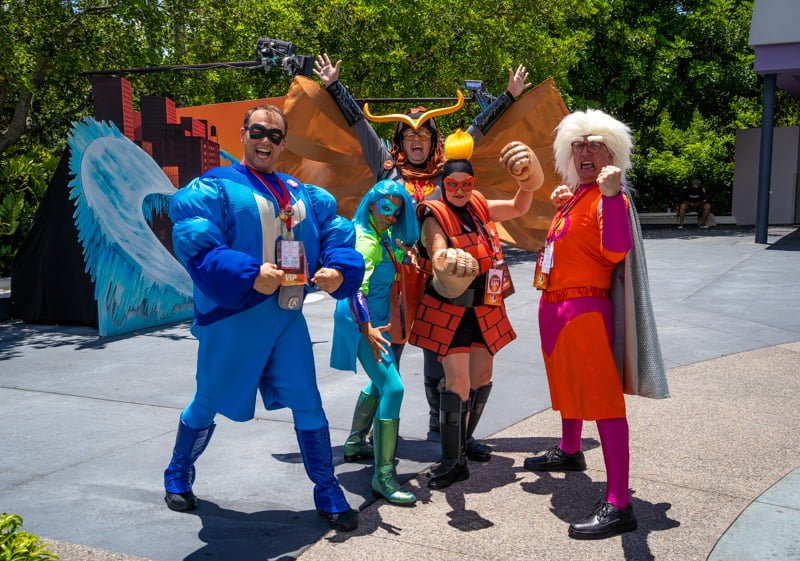 On the plus side, this group of characters (super fans?) from Incredibles 2 is pretty fun.

We’ve yet to see the film (we tried several days the weekend it was released, and every single showing was sold out at the AMC near us!), so I’m not sure. 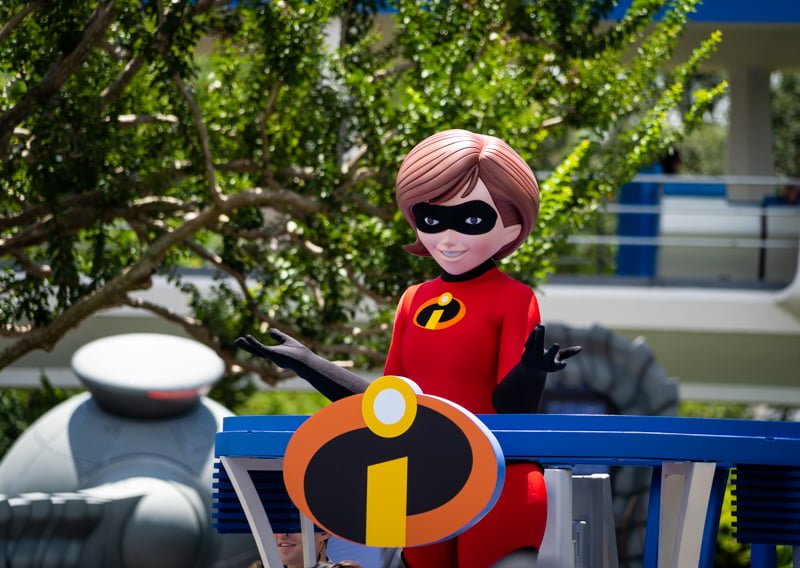 The character stuff is all fine, and families seem to be loving the presence of the Incredibles in Tomorrowland. As temporary entertainment, this works for us. We also saw a ton of families decked out in Incredibles shirts, so clearly there’s demand for this.

The decorations are unfortunate. Absolutely no effort was made to integrate them with the existing designs of Tomorrowland–they were quite literally just plastered on top of stuff.

I have many more “thoughts” about how terrible this looks, but I’ll bite my tongue because everything I’m mustering would be fairly mean to whoever designed this. (That is, assuming it wasn’t designed by drunken monkeys.) 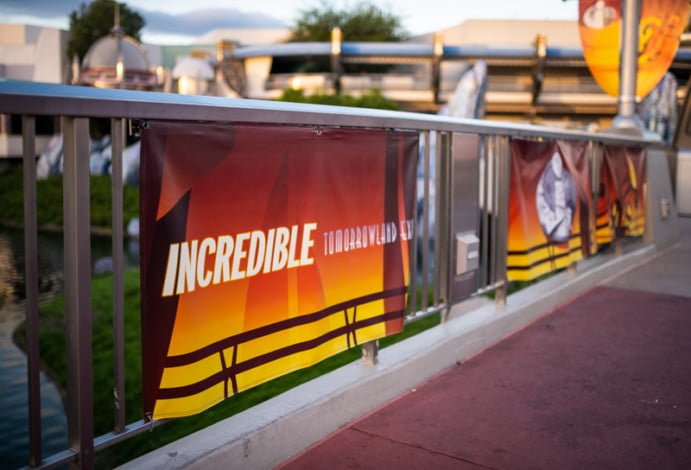 Moving along, there are banners everywhere. I’m not going to post photos of them all, but they must’ve gotten one helluva deal at Party City. (Perhaps someone had a coupon that was about to expire?)

Next, there’s the Incredible Tomorrowland Expo ‘Super Party Time’ dance party. This is…interesting? I enjoyed some of the bizarre entertainment here, but in a totally ironic way. I’m guessing that’s how it was intended, though? 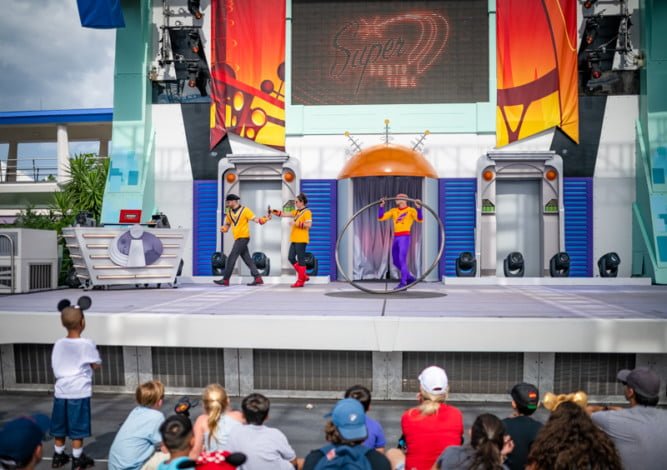 The way I see it, if this stage is going to exist, cluttering up Tomorrowland, adding off-theme entertainment, and creating noise pollution in my beloved Carousel of Progress (I sound like such an old curmudgeon), it might as well add nonsense that makes me chuckle a bit. And this does.

In addition to that other stuff, there are 4 Incredibles photo ops in Tomorrowland. Compared to everything else, these are actually pretty cool, and don’t appear to be totally phoned-in. 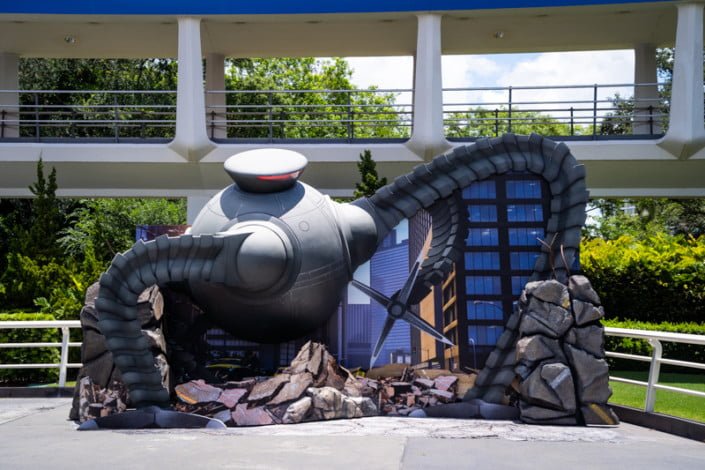 Earlier in the spring, there was a Toy Story merchandise stand by Buzz Lightyear’s Space Ranger Spin (shaped like the claw with aliens atop it), but that was removed. Presumably, this occurred as Walt Disney World tries to consolidate its Toy Story offerings into Toy Story Land.

It’ll be interesting to see whether Buzz Lightyear’s Space Ranger Spin is re-imagined. It seems the concept could be swapped out for minimal investment–and be touted as something new. 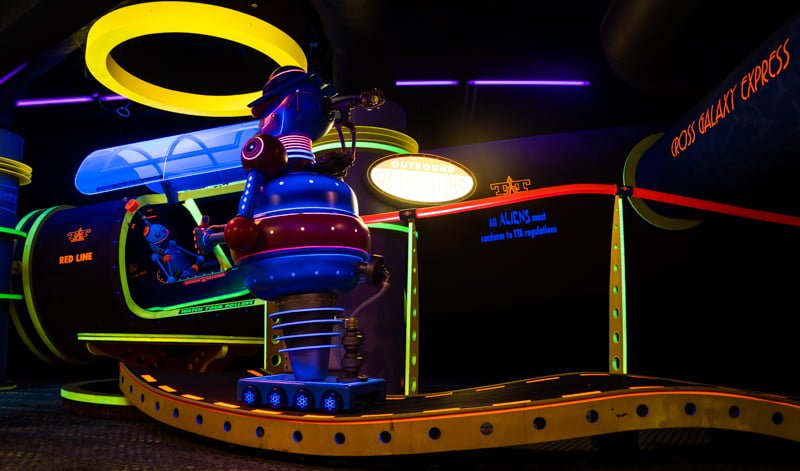 Unfortunately, spring was also the end of the iCan robot. This was totally cheesy and bizarre, but it also fulfilled my “at least it made me chuckle a bit” standard for Tomorrowland ’18, so I was a fan. We poured one out for you, iCan.

That’s not iCan above, but it is one of the vignettes in the Tomorrowland Transit Authority PeopleMover. Recently, there have been rumors of adding show scenes and a permanent Incredibles narration (among other things) to the PeopleMover. I haven’t had a chance to check into the veracity of these, but with the PeopleMover in desperate need of an extended maintenance refurbishment (and being more popular than ever), I could see this happening. 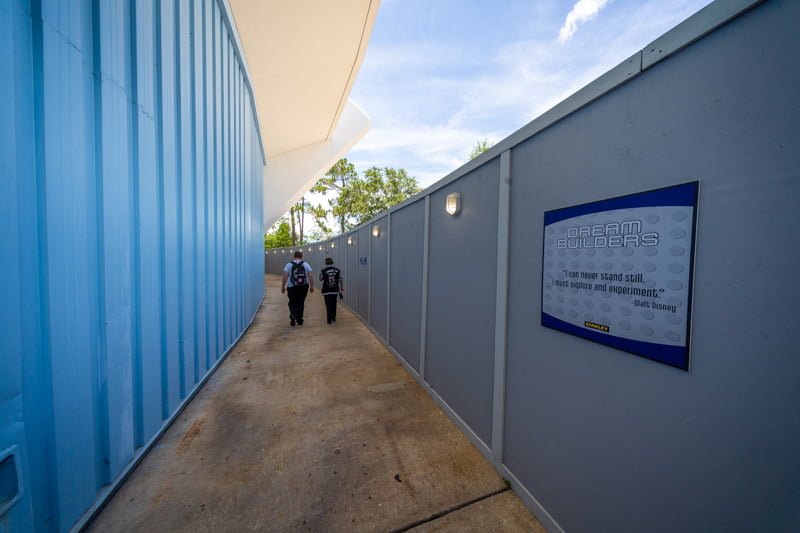 Speaking of maintenance refurbishments, Space Mountain has had its exit re-routed in what I’m assuming was an unplanned move.

The first day this occurred, the wall to the right in this photo was not up, and you could see into the TRON Lightcycle Power Run construction area. There isn’t a ton to see there yet. 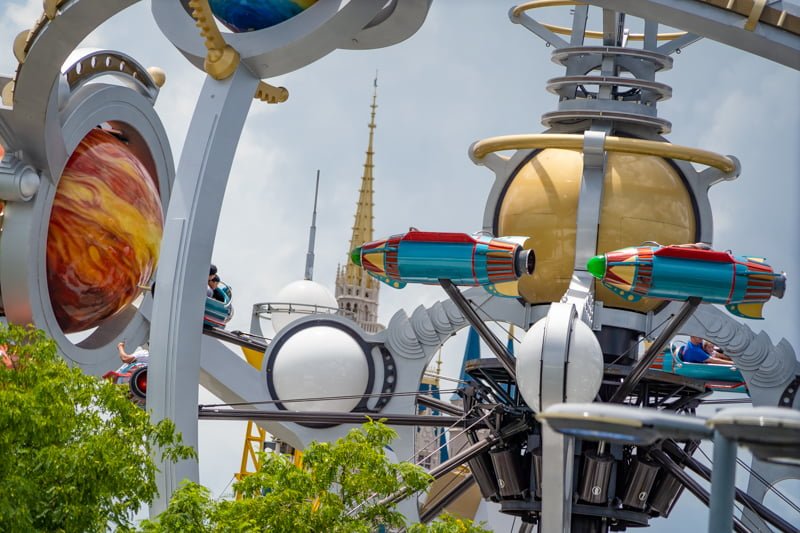 In terms of modifications to Tomorrowland to accommodate the aesthetic of TRON Lightcycle Power Run, the bare minimum is a paint scheme change.

This has been occurring for the last couple of years throughout the land, from the rocks at the entranceway to Carousel of Progress and the exterior of the PeopleMover. Each of these has looked fine in isolation, but none are cohesive with the current overarching style of Tomorrowland, let alone TRON’s style. Ultimately, I think much more than new paint is needed. Hopefully we start to see bigger changes in the next couple of years.

Finally, on our way out of Tomorrowland, we’ll stop by the famous (infamous?) Purple Wall, which has received a fresh coat of paint and a couple of new designs. It looks nice.

The Purple Wall is another thing about which I have very mixed feelings. I actually don’t dislike it, but I do think it’s a surprisingly complicated topic well beyond the scope of this post. 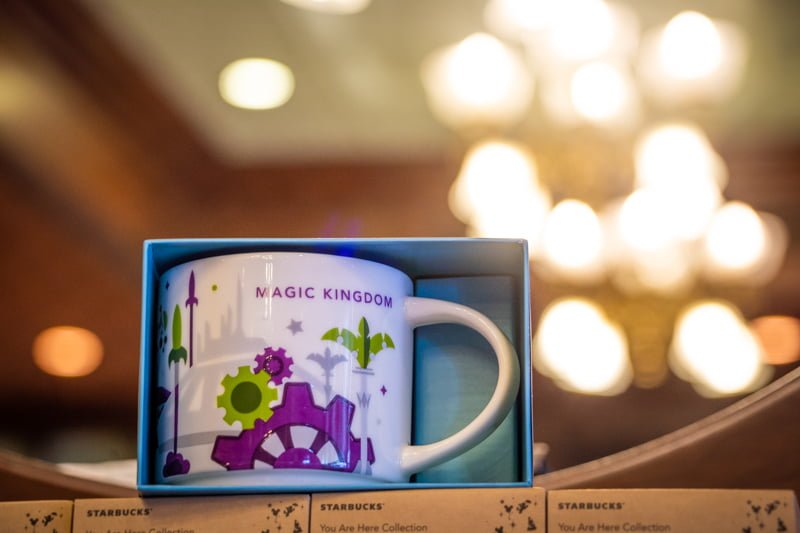 In totally unrelated news, there’s a new Starbucks “You Are Here” mug for Tomorrowland. I guess I buried the lede here, as this mug is unquestionably the coolest part of this update.

What I really love is that they (apparently?) designed this like 3 years ago, and included only Tomorrowland ’94 goodness. I know not everyone was a fan of this incarnation of Tomorrowland, but it’s the one of my childhood, and I absolutely adore it.

Overall, this snapshot of Tomorrowland in Summer ’18 is probably not what it’ll look like a year from now, much less 3 years from now when TRON Lightcycle Power Run opens. From aesthetic changes to larger refreshes and even some overhauls or replacements to existing attractions, a lot is going to be changing in Tomorrowland. Hope you enjoyed this look at the land’s current status, and where it might be heading next…

What do you think of Incredible Tomorrowland Expo? Are there specific changes you’d like to see in Tomorrowland, or an aesthetic you’d like to see embraced for the overall look of the land? Any questions we can help you answer? Hearing your feedback is both interesting to us and helpful to other readers, so please share your thoughts below in the comments!