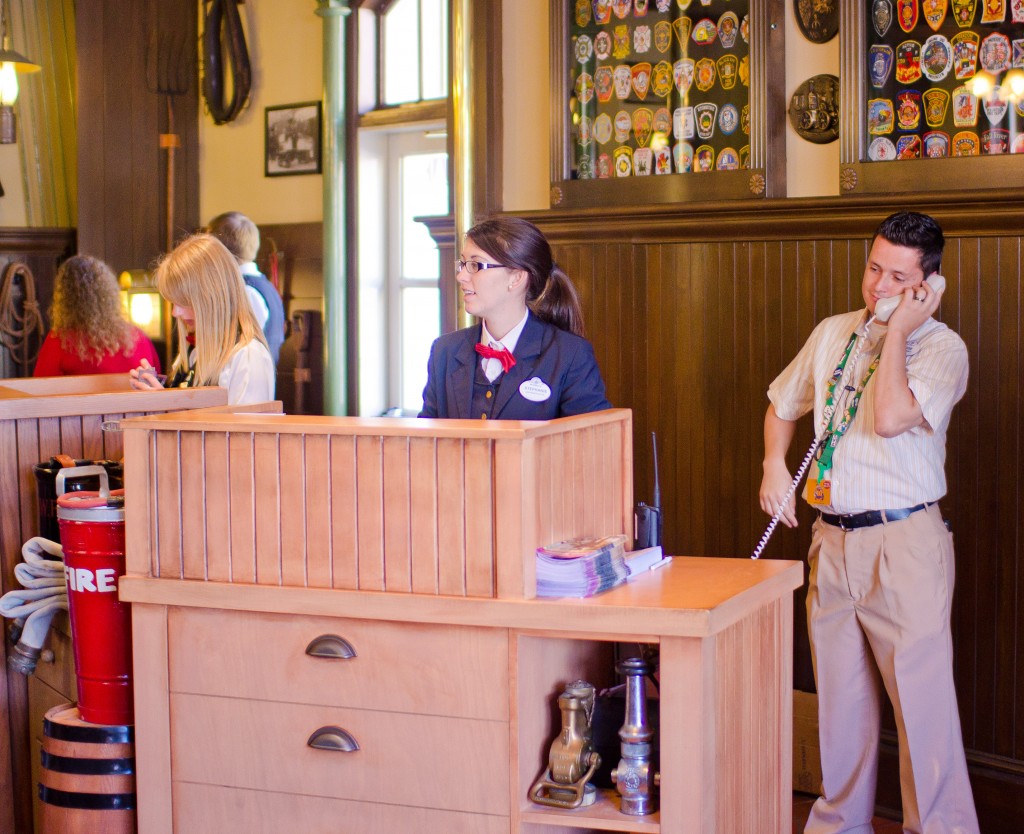 Sorcerers of the Magic Kingdom is an interactive game in Walt Disney World’s Magic Kingdom that debuted in 2012. At the Main Street Firehouse, Merlin recruits park guests as apprentice sorcerers for the game, and sends them out to various lands in the Magic Kingdom to do battle with Disney villains, led by Hades, with special spell cards featuring heroes and other good guys from Disney animated classics.

Magic Kingdom guests receive a map unique to the game that indicates the locations of various Magic Portals for the game. Guests also receive a small deck of cards, which contains a few spell cards and a Sorcerer Key card that activates the hidden game portals throughout the Magic Kingdom. Magic Portals are somewhat hidden, so the map can be instructive to those who don’t have a lot of experience with the game. These portals are located throughout Main Street USA, Adventureland, Frontierland, Liberty Square, and Fantasyland. The Magic Portals can best be spotted by the Sorcerers of the Magic Kingdom emblem on the ground near the portal, and a small lock on a facade near the emblem. To activate a Magic Portal, guests scan their Key card at the lock, which initiates a video sequence on the Magic Portal screen. Based upon prompts from the video, guests wave/hold their spell cards at the villains to initiate attacks on them.

After guests activate their first Magic Portal upon leaving the Main Street Firehouse, a story-driven interactive game ensues that essentially amounts to Hades and other villains wanting to steal Merlin’s crystal, and heroes (through the guest) from various Disney films helping the absent-minded Merlin protect the crystal. That is the less-than-Cliff-Notes version of the story, it’s actually quite deep and varies based upon what land guests engage in their quest. You can find more of the story here, if you’re so inclined. See more videos of the game here.

Sorcerers of the Magic Kingdom has already proven to be quite a divisive game. Some people, who haven’t even played the game, don’t like it on principle. They argue that it encroaches upon the careful theming of the Magic Kingdom, or dismiss it as another screen-based form of entertainment. Others have lauded the game, calling it brilliant or totally awesome without much additional explanation.

We don’t think it’s either totally awesome or totally terrible.

First, the positive. It’s great from a scavenger hunt perspective. It gets guests to explore some areas of the Magic Kingdom that they might have previously breezed past on their way to Splash Mountain or Peter Pan’s Flight, and we think this is a good thing. 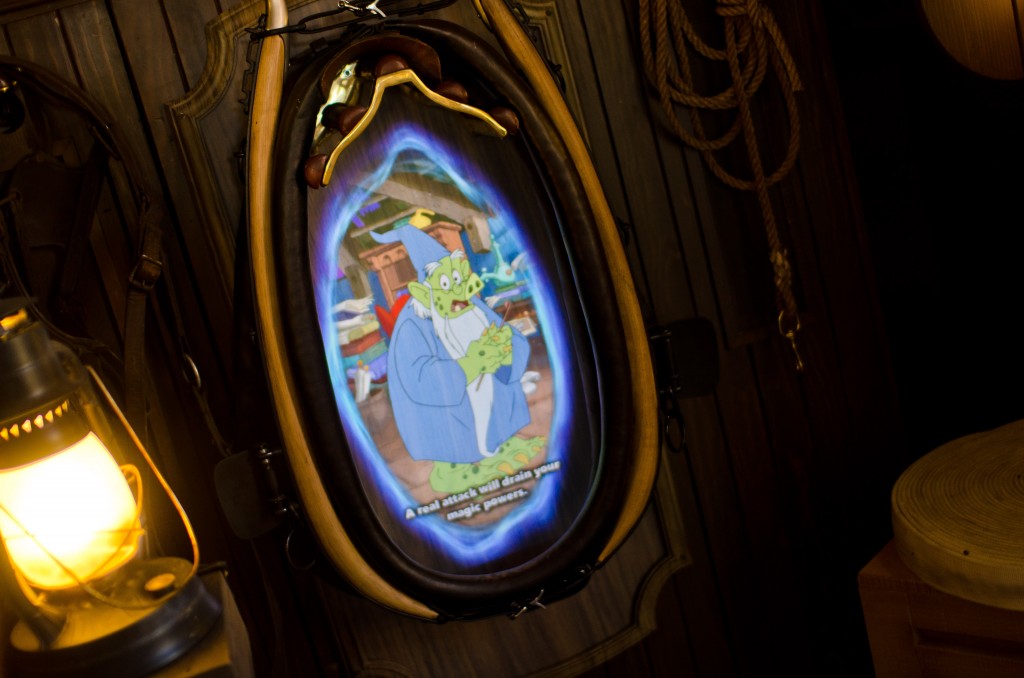 It also has a pretty entertaining story, and incorporates a lot of seemingly forgotten (at least when it comes to the theme parks) characters into the quests. The fact that Merlin and Hades are the stars of the show is alone a testament to this. The story is enjoyable, fairly detailed, and varies enough on subsequent visits that it can be a compelling reason to play the game.

It seems like it will be a great game for kids, as they have the opportunity to fight villains and interact with some of their favorite Disney characters in an intuitive way that will likely be quite rewarding to them.

Before addressing the actual negatives, I’ll address the perceived negatives from others in the fan community. First, the noise. I didn’t think the game was overly loud, and when I wasn’t playing, I noticed it far less than I notice Kim Possible in the World Showcase (and I barely even notice that). The Magic Kingdom is pretty loud in general, and this game seems to be quite quiet by comparison. Unless you choose a spot right by a Magic Portal to watch the parade or fireworks, I doubt it will ever encroach upon your experience in the parks. 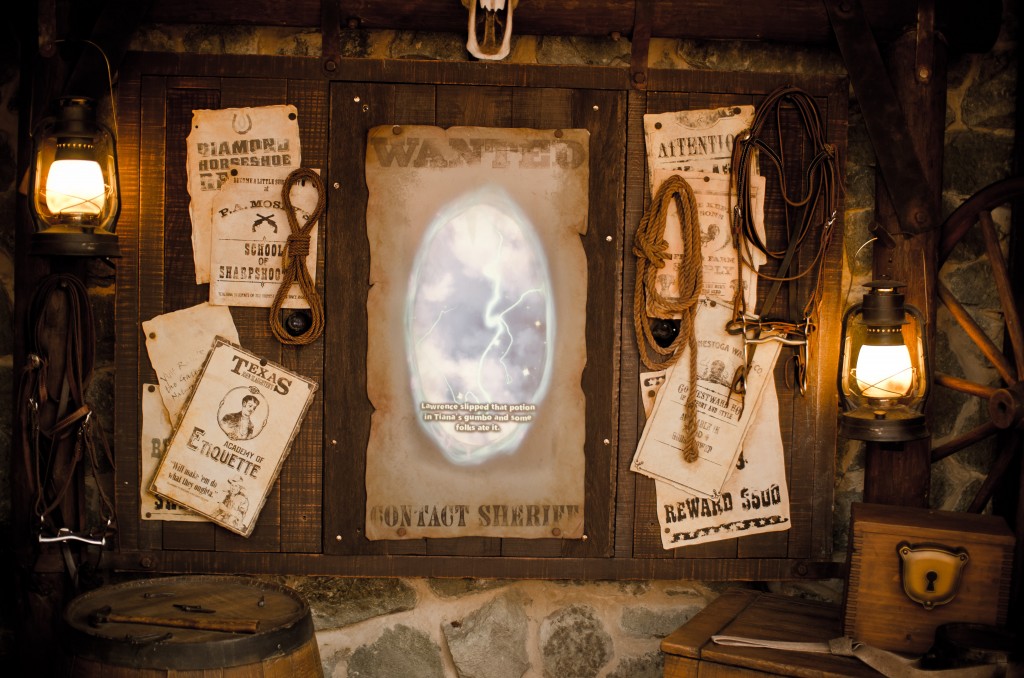 The second concern is the screen-driven nature of the game. While I’m hardly a fan of the proliferation of screen-based attractions (or components thereof) in the parks, this seems to be a trend that has no end in sight. The screens here do an effective job of telling the story, and the biggest component of the game does seem to be the story that is told through the screens. So in this case, I think they’re completely necessary for the experience. As I’ll mention below, I would like to see more in the way of three-dimensional props, though.

Now, my areas for improvement in Sorcerers of the Magic Kingdom. The game is a bit superficial as of right now (the test and adjust phase is still ongoing, so hopefully this will be worked out). Anyone over the age of 10 will quickly realize that the game is interactive in name, only. By our second mission, both Sarah and I already felt like the interactive portion of the game was a chore. The scavenger hunt (finding the portals and unlocking them) was still fun, but there was no challenge to the “game,” and the cards we used didn’t seem to make much of a difference. From what I understand, this will be tweaked in the future to allow different difficulty settings, so hopefully that will dramatically increase my impression of the game.

Beyond that, while well-themed and fairly hidden, the Magic Portals were little more than television screens. If they’re in the sun, sometimes these portals can be difficult to unlock, too. It would be nice to have some three-dimensional interactive props a la Kim Possible, which seem much more rewarding to uncover from this guest’s perspective. Don’t get me wrong, the story on the screens was entertaining and the screens made the story in Sorcerers of the Magic Kingdom deeper than the story in Kim Possible, but Sorcerers of the Magic Kingdom still could have used something more in the props department. Maybe that’s just me. 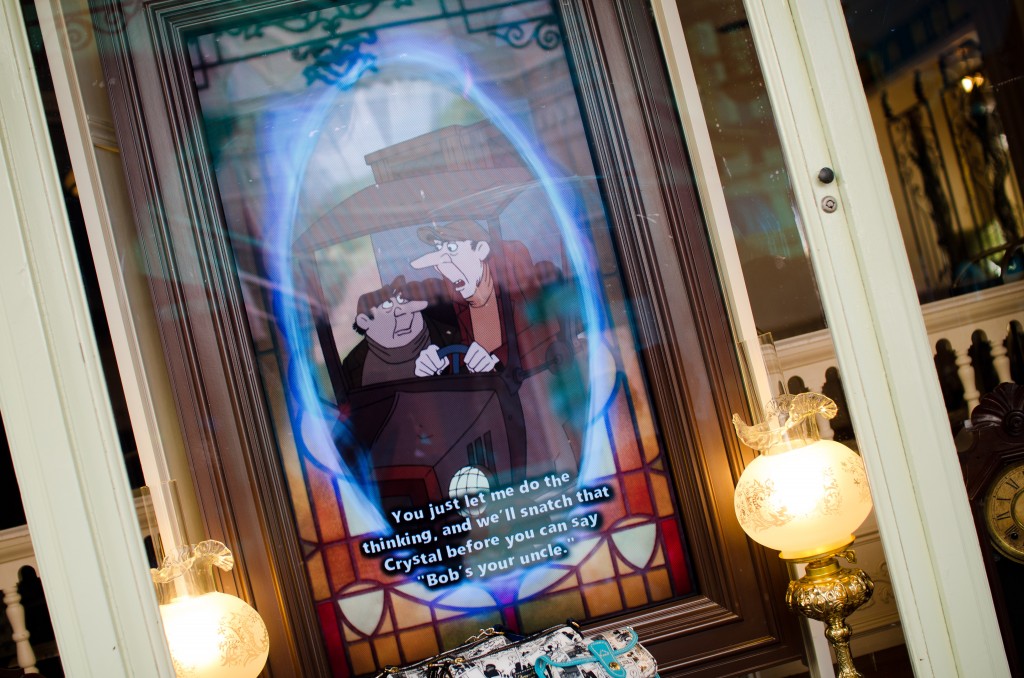 The other big issue is from a logistical standpoint. We tested the game a week before its official opening in February 2012, and even without any in-park advertising of the game (it wasn’t on maps) besides a small, vague sign by the Firehouse, there were crowds and 3-4 person deep lines at several of the Magic Portals. If the game is this busy unadvertised on a slow day in February, imagine how it will be after it launches officially during Spring Break. Hopefully Disney introduces a reservation-type system like the one that is used for Kim Possible.

Another logistical issue is the crowds of non-playing guests that gather around the Magic Portals for Sorcerers of the Magic Kingdom. Several guests interrupted us as we were playing to inquire about the game. We pleasantly answered them each time, but in so doing, we missed bits of the story. I see no way that Disney can address this. It’s going to be an inherent issue with the game. On the same lines, even though Disney has done a good job trying to locate the Magic Portals in mostly low traffic areas, there were a few times when other guests walked between us and the portal while we were playing. This is another thing that I don’t really think Disney can address. I only see both of these issues exacerbated during busier times of year.

My final request would be that, at some future point, Sorcerers of the Magic Kingdom somehow utilize the long-unused Sword in the Stone as a sort of grand finale for guests who complete the game and trigger an RFID panel on the sword. Not only would this be a rewarding way to conclude the game, but Disney could station a PhotoPass photographer there to capture memories (and revenue) of guests who just finished the game. What kid wouldn’t want a photo of them pulling the Sword from the Stone with Cinderella Castle as the backdrop?! 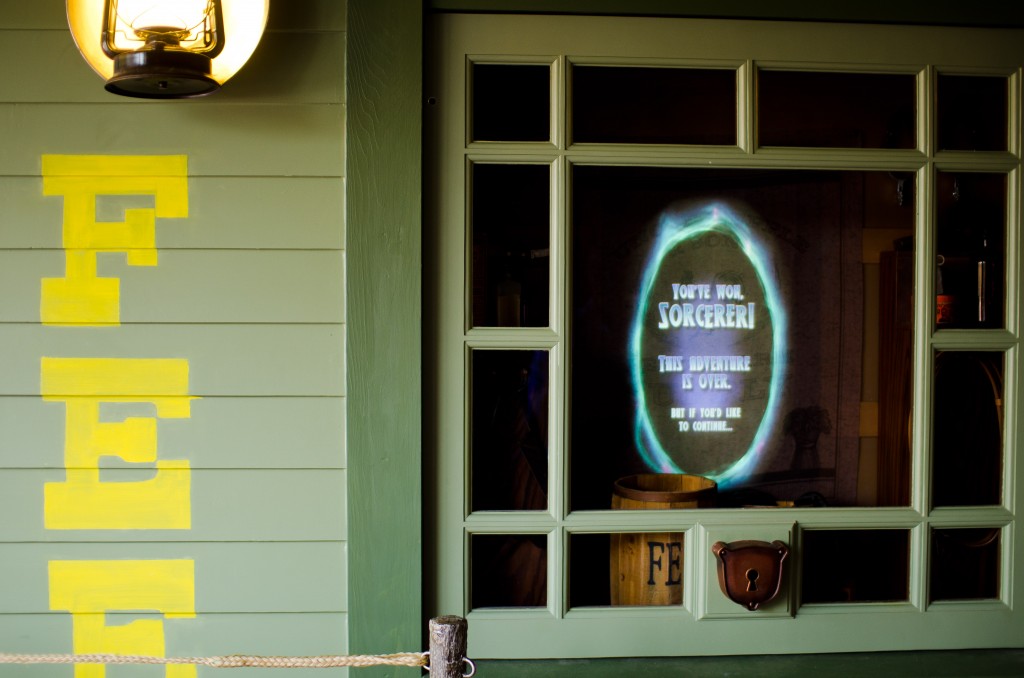 Overall, as it stands, the game was an amusing one time attraction for us. We will definitely give it another chance in May, though, just to see if some of these concerns have been addressed. If different difficulty settings are enabled, we most likely will play the game regularly so long as Disney institutes some means of throttling the number of guests that can play the game at a single time (I have no interest in waiting in a line of 4 or more people for every portal). The other issues I have with the game aren’t with the game itself, but with other guests, and I’m willing to overlook those if the game is a more challenging and rewarding experience.

Even if the varying difficulty settings, which appear to be built into the game based upon an examination of the cards, are not enabled, I predict this game will be a hit for a lot of guests. This is especially true for younger guests, as I feel they will enjoy the gameplay as-is, and guests who enjoy collecting, as some fans have already made efforts to collect all 70-some cards (presumably Disney will sell add-on decks and other accessories in the future to offset the costs of the cards, making it even more of a collectible experience). I realize not every attraction at Walt Disney World will appeal to me, and since the attraction doesn’t impact my park experience in a negative way, it’s difficult for me to find much fault with it. That said, I see the potential in the game, and with just a few tweaks and changes to how the gameplay occurs and is managed, I could see this game become a huge success for guests of all ages and interests.

What do you think of Sorcerers of the Magic Kingdom at Walt Disney World? Are you excited to play it? Let us know in the comments! If you enjoyed this post, please “Like” or “Share” it with your friends!

18 Responses to “Sorcerers of the Magic Kingdom Overview & Review”