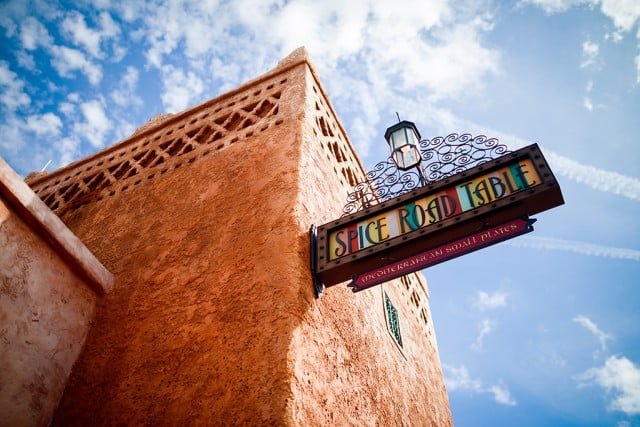 Spice Road Table is a tapas restaurant in Epcot at Walt Disney World. It’s located in the Morocco pavilion in the World Showcase, and offers waterfront views in an open area or indoor eating area. In this WDW dining review, we’ll share food photos, pros & cons, thoughts on ambiance, and whether you should dine at Spice Road Table.

Technically table service, Spice Road Table has a Mediterranean menu and is priced between Tangierine Cafe and Restaurant Marrakesh in Morocco, skewing much closer towards Restaurant Marrakesh. Spice Road Table accepts neither the Disney Dining Plan nor Tables in Wonderland at present, but we anticipate it accepting Tables in Wonderland at a later date.

Spice Road Table continues a recent trend in the expansion of World Showcase dining options. There’s not necessarily anything wrong with this, but when the only additions to World Showcase in recent years are La Cava del Tequila (2009), Via Napolia (2010), La Hacienda (2010), Tutto Gusto (2012), Les Halles Boulangerie and L’Artisan des Glaces (2013), that’s concerning…

This comes with no substantive attraction additions or overhauls (excluding minor exhibits and games) since El Rio Del Tiempo became Gran Fiesta Tour Starring the Three Caballeros in 2007. We love some of these new dining options–La Cava del Tequila and Via Napoli are great–but the idea of paying admission to a theme park for the “privilege” of then paying more money for its new focus, dining, is frustrating. If the dining additions were coming step-in-step with attraction additions and plussings, we would applaud these new dining choices.

But we digress; Disney’s focus of increasing upcharge opportunities at Epcot instead of experiences included in theme park admission doesn’t bear on the quality of Spice Road Table itself. While it eats up more prime World Showcase lagoon waterfront space, it’s actually replacing a hodgepodge of “temporary” kiosks and looks far nicer than these kiosks. So at least there’s that small victory. 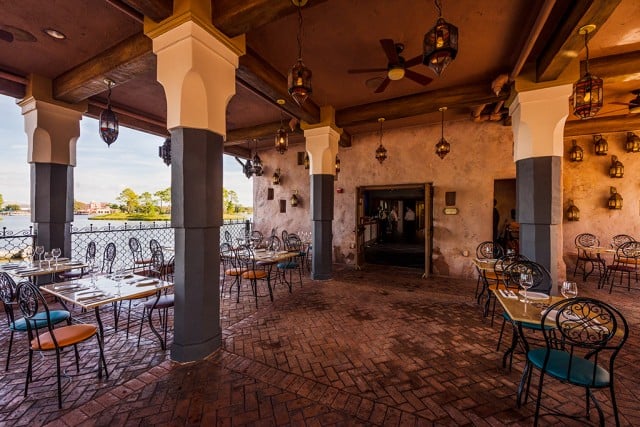 To its credit, Spice Road Table actually looks fairly nice for such a simple and small location. There are a number of nice details throughout the restaurant, my favorite of which is the light fixture in the lobby/bar area. Beyond the fixtures, tables, and tile-work, there really isn’t much to see.

The restaurant has a very small footprint, and takes a utilitarian approach, with very little wasted space. This isn’t a knock at it, nor is it praise. It looks nice for what it is, which is a small, mostly open-air restaurant. At the very least, it looks much better than what it replaced. 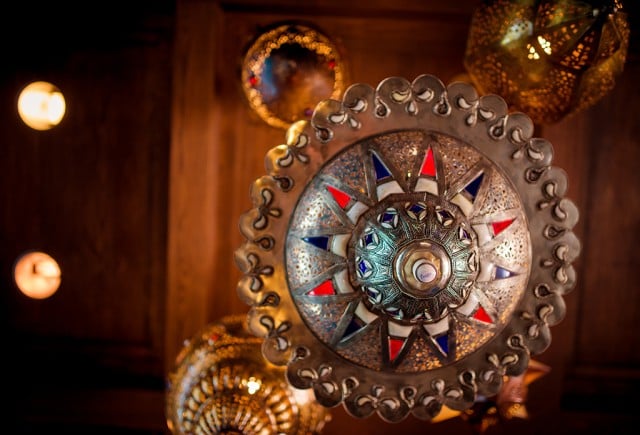 For those unfamiliar with tapas restaurants, Spice Road Table offers small portions that are meant for sharing. The idea is that you order several dishes and have a bite or two of each, sharing them among your party. 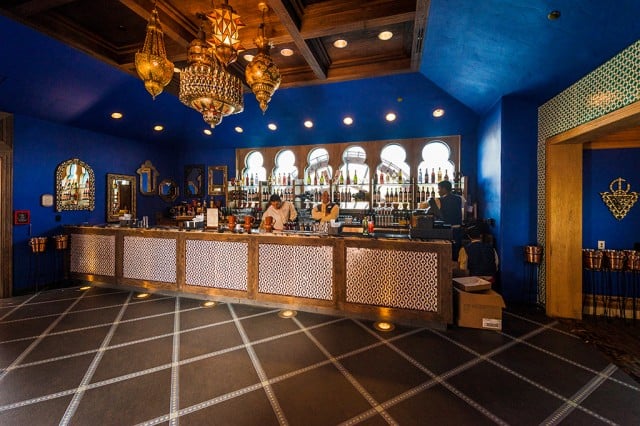 Those familiar with Epcot’s Food & Wine Festival will find familiar pricing at Spice Road Table. In fact, the prices are even more expensive! I suppose that you pay a premium for the table service experience?

Going into the meal, I was prepared for these high prices and small portion sizes for the tapas thanks to feedback from others, so I avoided ordering the single item dishes. Instead, I ordered the Mogador Sampler (consisting of the Mussels Tagine, Salted Cod Croquettes, and Fried Calamari) and the Tingis Sampler (consisting of a Lamb Slider, Harissa Chicken Roll, and Merguez Sausage), which were $16 each. The portions on these are smaller than the individual dishes, but not by a whole lot. 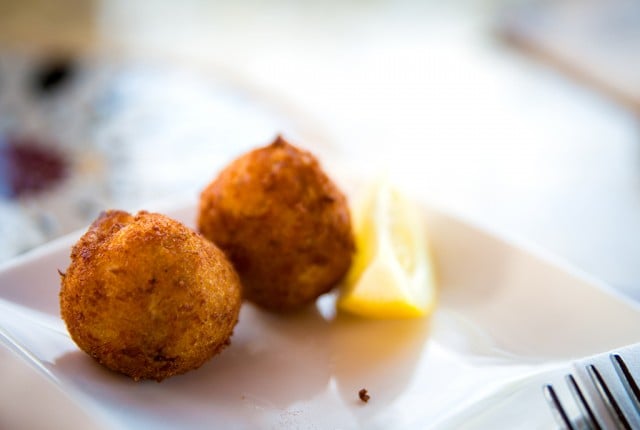 Let’s start with the Mogador Sampler.

The Salted Cod Croquettes were mediocre, definitely doing too much justice to the “salt” in their name. The flavor was on the bland side, with the salt and thick breading overpowering the cod. 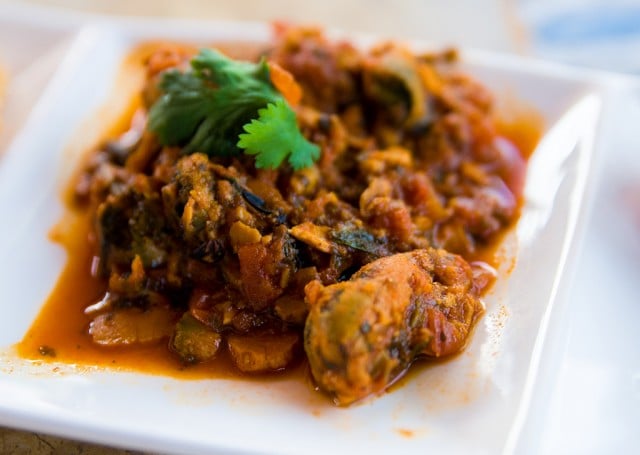 The Mussels Tagine was so-so. The mussels here were pretty good and I have to give Spice Road Table credit here for trying something a little less conventional and tasting a little more nuanced and slightly adventurous, but the end result just didn’t come together too well.

Your mileage may vary on this one–I wouldn’t go as far as recommending it, but I wouldn’t recommend avoiding it, either. I think this certainly has potential to be really good. 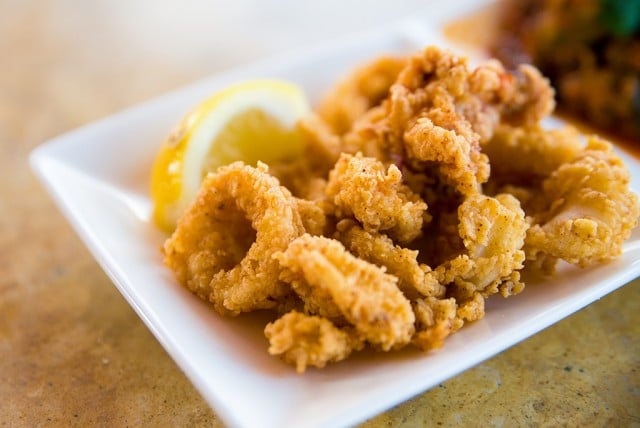 The Fried Calamari was the best of the three items in this sampler, but I’m a sucker for calamari.

To me, even the worst calamari is still pretty good. In this case, the calamari here actually was pretty good, with light breading and thick, tender rings of meat. Out of everything I tried, this was the clear winner. 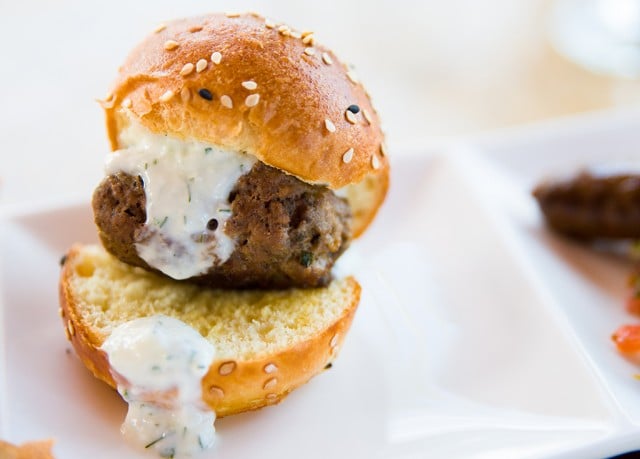 Moving on the Tingis Sampler, I first trip the Lamb Slider here. I have a soft spot for sliders, and this one was fairly good. The Tzatziki sauce and bun were both perfect, but the lamb meat itself left a little something to be desired.

It wasn’t downright bland, but definitely could have used more seasoning if they were going for an interesting or flavorful slider. As it stands, it was still pretty good. 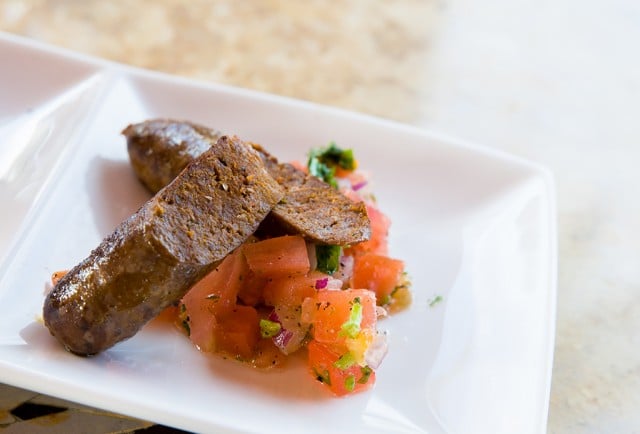 The Merguez Sausage was really disappointing. It was overly dried and oddly spiced.

It was also quite small, but I can’t really complain about that given the taste. I’m hoping that mine was just over-cured and incorrectly spiced, as it seemed like a good item in theory. 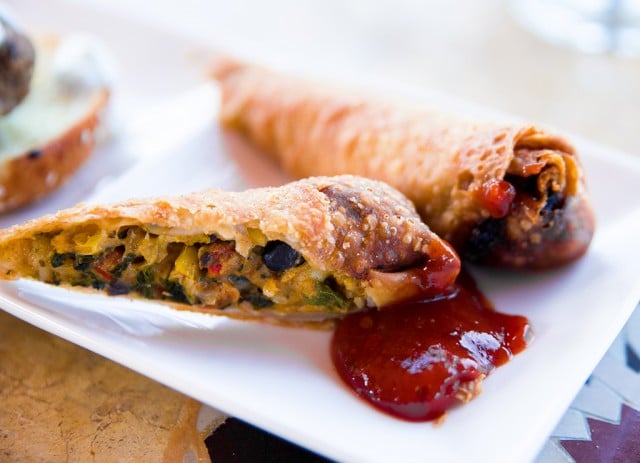 The Harissa Chicken Roll was a good size, but just as uninspired. It tasted like a microwaved egg roll, but with chicken. Its Harissa Ketchup was actually fairly decent (it gave a kick to the dish that the chicken roll wholly lacked).

I was still hungry after eating these two samplers, but I was unimpressed by Spice Road Table at that point, so I decided to cut my losses and skip dessert. For my meal, drink, and tip, the total was over $40. Relative to a full meal at a table service restaurant in World Showcase that may not seem like a lot, but this was not table service quality, nor was I full at the end of the meal (add on another ~$10 for dessert snacks I later had elsewhere). 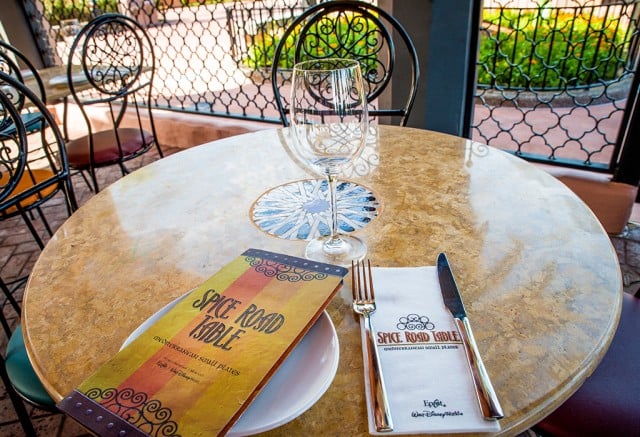 On the plus side, likely due to it not accepting Tables in Wonderland (I’m sure that will soon change if the restaurant doesn’t become more popular) or the Disney Dining Plan, there were only a few other guests in the restaurant during my meal, and the service was spectacular. Also to its credit, they have unique napkins (a nice detail that has gone missing from other Walt Disney World restaurants in recent years), but you know that if you’re praising napkins in a review, you’re really grasping at straws for things to praise.

Overall, Spice Road Table is not a place to which I’ll be returning anytime soon, nor would I recommend anyone else try it unless you are really searching for new places to eat in World Showcase. In its defense, it seems that others have liked it more than I did. Plus, it seems like many of the items tried had the right idea, but didn’t execute it well, or just missed the mark some way or another. Maybe with a bit of tweaking and over time, Spice Road Table will prove to be a better option than it is at present?

However, we don’t review based on potential, but on actuality, and right now, Spice Road Table leaves a lot to be desired. For a restaurant that has “spice” in the name (and in its backstory/mission statement), the food is surprisingly bland and uninspired. Even the dishes that are good (Lamb Slider & Fried Calamari) are pretty commonplace fare, which is also disappointing. Add to that high prices for small portions, and Spice Road Table is a real disappoint. About the only situation I can see recommending it is if you must have a waterside table for viewing Illuminations, and you only want to have Mediterranean food. Anyone else who is in the mood for a light, hearty Mediterranean should just split a dish at Tangierine Cafe. It’s cheaper and arguably just as good.

Have you tried Spice Road Table? Did you enjoy it? If so, what did you try? Thinking of giving it a try? Do you agree or disagree with our assessment? Any questions we can help you answer? Hearing your feedback–even when you disagree with us–is both interesting to us and helpful to other readers, so please share your thoughts below in the comments!