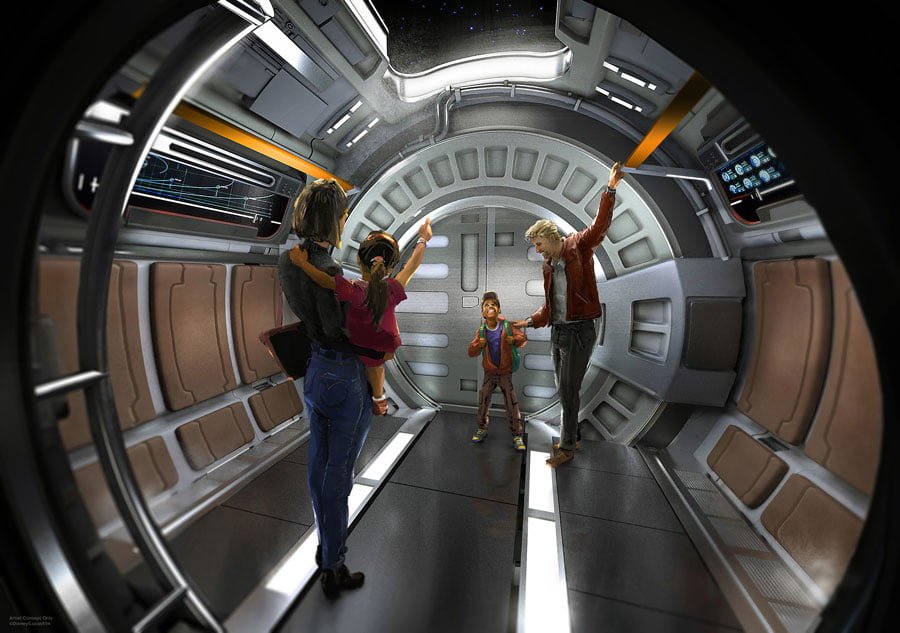 At this weekend’s Destination D event in Walt Disney World, Disney Parks Chairman Bob Chapek revealed new details for Star Wars: Galaxy’s Edge at Disneyland and Hollywood Studios. Among the reveals were the names of the two attractions, info about the score being composed by John Williams, interactive integration with the Play Disney Parks app, and further details about the Star Wars Resort being built at WDW.

Let’s start with the hotel, because not much new info has been officially revealed since what was shared when the Star Wars ‘Starship’ Resort was announced at the D23 Expo last summer. About all that’s known is that it’s currently being built on the south side of Disney’s Hollywood Studios, just east of World Drive and that it will “seamlessly connect” to Galaxy’s Edge (most likely not in the literal sense–leaked plans show a place for shuttle buses).

Per Disney’s announcement today, this groundbreaking hotel will place guests in ‘launch pods’ and be a fully-immersive, multi-day Star Wars adventure aboard a luxury starship. The resort experience will entail high-end dining, space-view cabins, and all of the exciting action you would expect from Star Wars. Not a ton of added details there, but it’s definitely consistent with the hybrid of a live action role playing game and resort experience we’ve expected since it was originally announced…

As for the two major attractions that will anchor Star Wars: Galaxy’s Edge on opening day at Disneyland and Disney’s Hollywood Studios, Chapek shared a couple of videos.

The first attraction is entitled Millennium Falcon: Smugglers Run. This ride will put guests behind the controls of the most famous ship in the galaxy in one of three unique flight crew roles.

As the New York Times reported over the weekend, Millennium Falcon: Smugglers Run will be a highly personalized ride, allowing guests to control their own Star Wars experience. The ride will use real-time video rendering technology invented by Industrial Light & Magic that responds to the way guests use 200 cockpit controls, allowing guests to successfully navigate the intergalactic mission–or even crash the Millennium Falcon.

The second attraction is called Star Wars: Rise of the Resistance. This ride puts guests in the middle of an epic battle between the Resistance and the First Order, and is expected to be a complex, multi-phase experience.

While we’re excited for both of these attractions (and truly, all things Galaxy’s Edge), we’re most looking forward to Rise of the Resistance. Based upon everything we’ve heard and the details that have leaked out, this is really going to push the envelope, and be a truly next-level experience.

Disney also shared the news in that Oscar-winning composer John Williams is creating new and original Star Wars themes exclusively for the land. This all-new music, a preview of which is in the video above, was recorded by the London Symphony Orchestra at Abbey Road Studios.

While this is a seemingly little thing, we think it’s a pretty big deal–and underscores the painstaking attention to detail that Disney is putting into Star Wars: Galaxy’s Edge. Disney could’ve just as easily recycled past Star Wars themes, or recorded something original by someone without the same ‘star-power’ as John Williams, but instead they appear to be going all out. 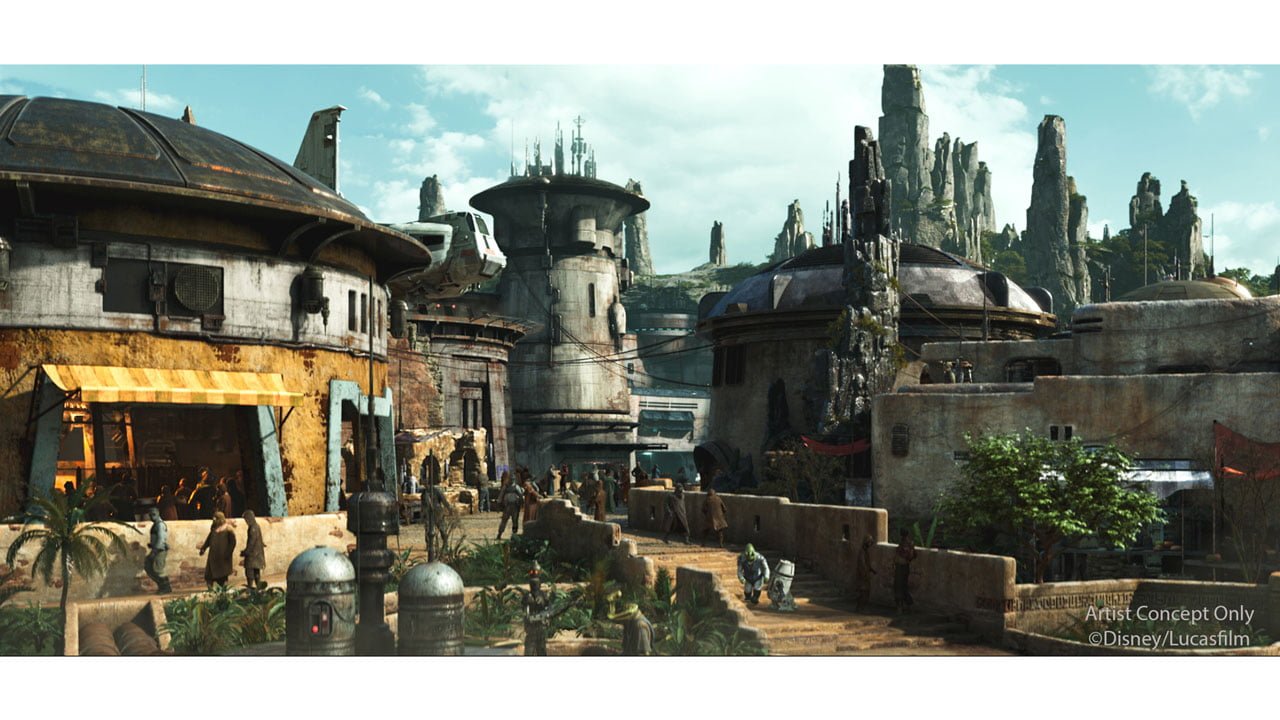 One thing about which we’re less optimistic is that the land’s “dynamic elements and optional interactive integration” will be available via the the Play Disney Parks app. In particular, we’re slightly skeptical that this interactivity will occur via a phone app, rather than something offline.

There have been a lot of rumors about interactivity in Star Wars: Galaxy’s Edge. Disney itself previously released this statement about guests’ performance in the Millennium Falcon ride: “perform with skill and you may earn extra galactic credits, while bringing the ship back banged up could put you on the list of a bounty hunter. End up on Harkos’s list and you may face a problem if you show up at the local cantina.”

While it was, and still is, unclear how these galactic credits would impact the guest experience while roaming the land, rumors suggested there would be a simplified live action role playing game element. More recently, we’ve heard some conflicting reports on the status of that, with some indicating it wouldn’t be present in the land at all.

Imagineering has play-tested a variety of experiences like this over the past several years at both Disneyland and Walt Disney World. It’s difficult for us to say whether they have been viewed internally as successes or failures, but we think it’s fair to say the guest participation rate has been low.

There are a number of totally valid reasons (from crowds to the convoluted nature of the experience) to shift away from a more live action experience to something app-based, but we really hope Star Wars: Galaxy’s Edge at least has streetmosphere performers that interact with guests–and not just passive live entertainment. When it comes to Galaxy’s Edge, we are definitely willing to give Disney the benefit of the doubt, as everything else has looked incredible and impressive. We just hope the interactive entertainment is engaging, and not something reserved solely for the guests of the Star Wars ‘Starship’ Resort.

In the presentation, other details were revealed about Black Spire Outpost, particularly the street market where guests will be able to shop at food stalls, enjoy delicacies like blue milk, or visit the Cantina to see an old friend Rex, as well as encounter creatures and characters from the Star Wars universe. It’s really hard to believe this land is less than a year away; I’m sure we’ll be hearing and seeing plenty more about it as more details trickle out. This is one of the most ambitious projects Disney has done in a while (ever?) and between that and the popularity of the Star Wars franchise, hype levels will be through the roof by the time Galaxy’s Edge opens next year!

Any thoughts on Millennium Falcon: Smugglers Run or Star Wars: Rise of the Resistance? Excited that John Williams is recording the scores for Galaxy’s Edge? What do you think about the addition of a boutique Star Wars Starship Resort to Walt Disney World? Would you do a stay at this luxury starship hotel experience, or would you prefer a more conventional resort? Let’s hear some of your thoughts about this news in the comments below!