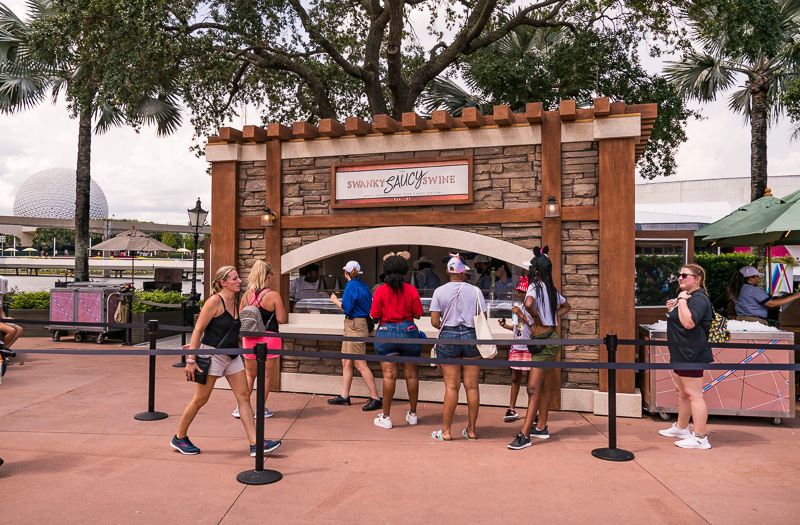 The Swanky Saucy Swine is a Global Marketplace in World Showcase during the 2022 Epcot International Food & Wine Festival at Walt Disney World. In this Global Marketplace review, we’ll look at the menu prices, share food photos, and offer thoughts on what is—and is not—worth your money.

Flavors from Fire has been one of our favorite food booths for the last several years running at the Epcot Food & Wine Festival, and the parallels should be obvious. It’s a little less clear with Trowell & Trellis–a plant-based booth presented by Impossible–but Swanky Saucy Swine occupies the same physical booth and uses the same grills. Suffice to say, expectations were high for the Swanky Saucy Swine based on the high quality of those booths. Plus, this blog loves awesome alliterative appellations. 😉

Here’s the food menu for the Swanky Saucy Swine booth at the 2022 Epcot Food & Wine Festival: 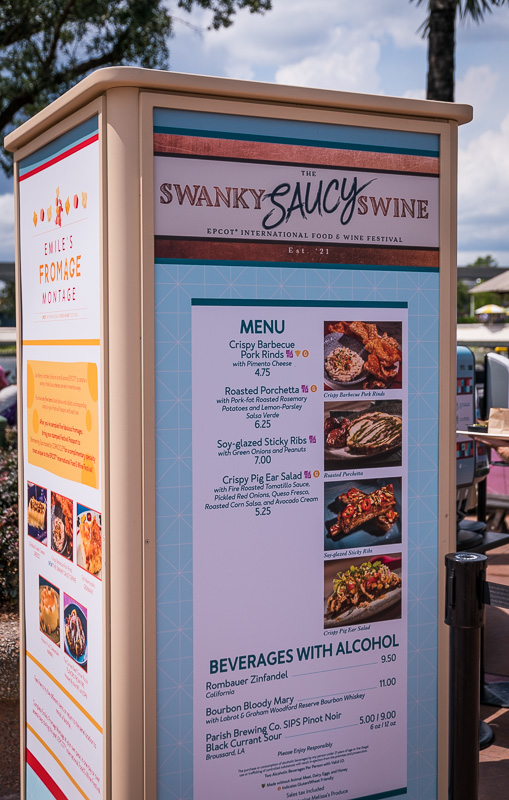 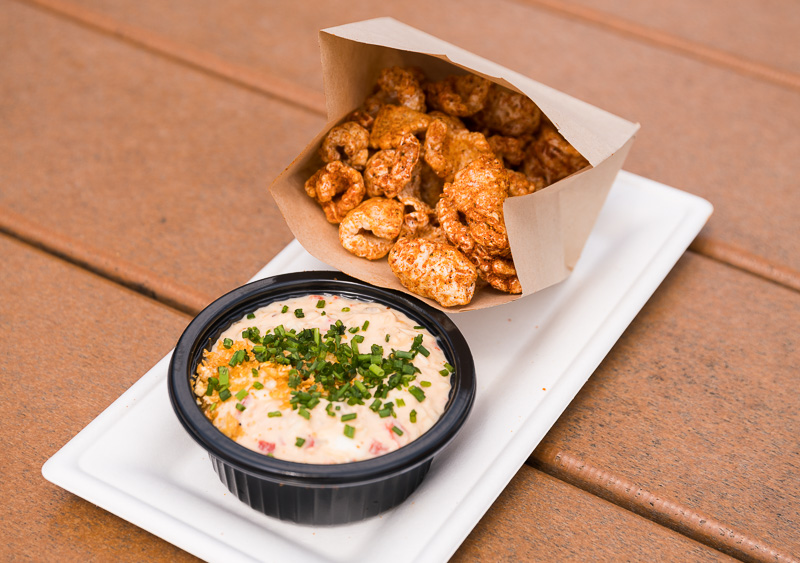 The pork rinds were a mixed bag, quite literally. Some were fantastic–light, airy, and letting the cheese dip shine. Others were overcooked and/or stale. All in all, a winner that we’d buy again and recommend. 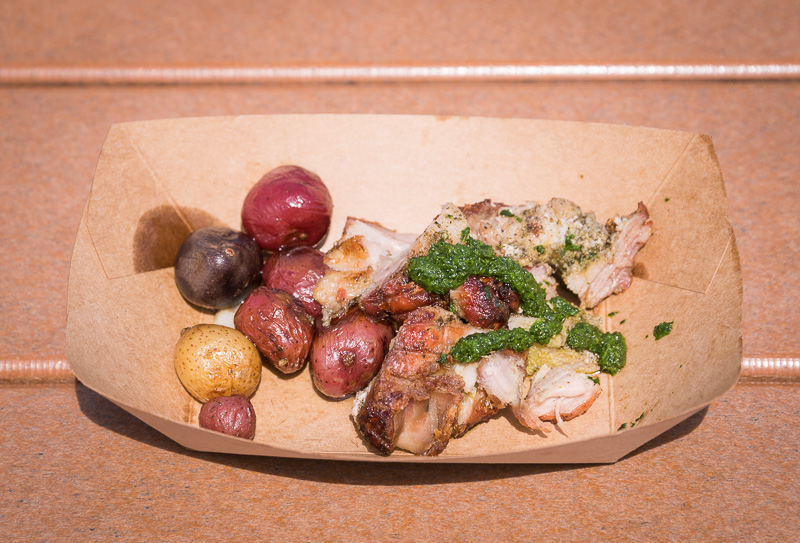 Roasted Porchetta with Pork-fat Roasted Rosemary Potatoes and Lemon-Parsley Salsa Verde ($6.25) – We were split on this one. I liked the pork, which was perfectly prepared. It was, however, overly fatty. That’s not something that typically bothers me, though.

None of the accompaniments really did anything to elevate the dish. The potatoes were relatively bland on their own, but we had extra pimento because of the abundance of hard pork rinds, and dipping the potatoes in that was perfect. The lemon-parsley salsa verde didn’t really work for me with the pork, but reasonable minds might differ on that. Overall, ours was middling, but I’d consider revisiting this later because I think the idea is a solid one and maybe it was just execution that missed the mark. 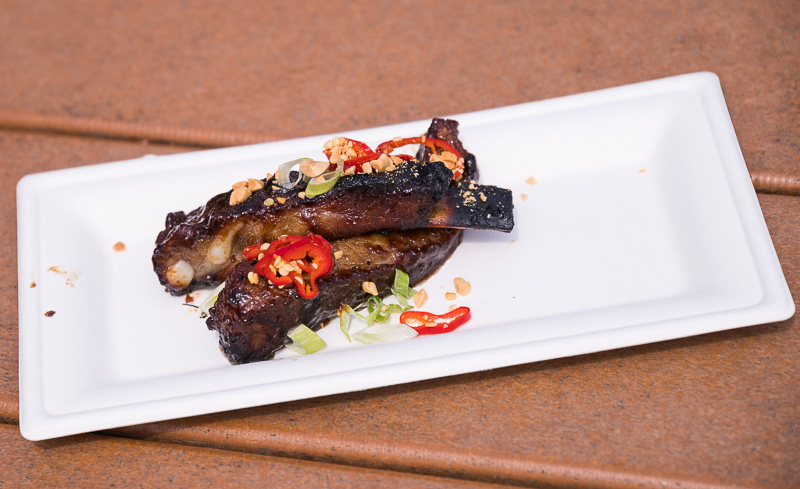 Soy-glazed Sticky Ribs with Green Onions and Peanuts ($7.00) – Everything about these ribs delivered–tenderness, quality, glaze, smokiness, and a nice exterior char. On that basis, we’d recommend these.

The problem is value for money. Maybe I’m just overly frugal, but $7 for two modestly-sized ribs seems pretty pricey, even by Walt Disney World standards. To each their own, I guess. 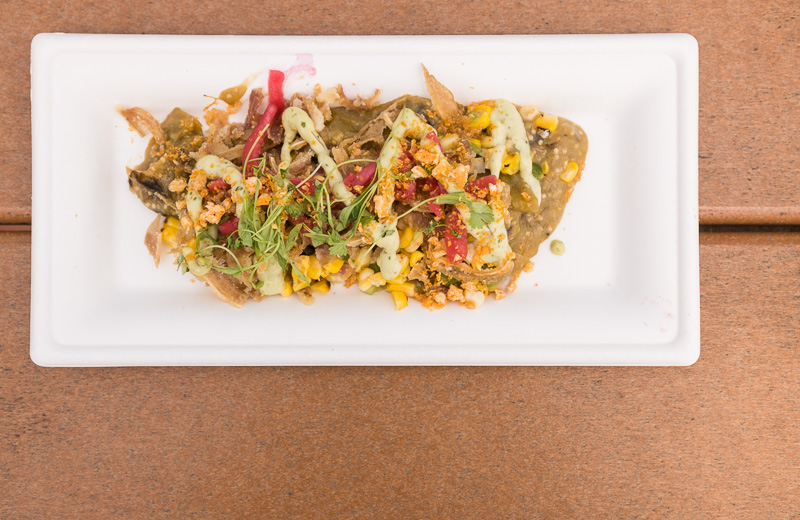 Crispy Pig Ear Salad with Fire Roasted Tomatillo Sauce, Pickled Red Onions, Queso Fresco, Roasted Corn Salsa and Avocado Cream ($5.25) – The previous occupant of this Global Marketplace was the plant-based booth, and this is an item that might’ve been right at home there. In fact, if you didn’t tell me there were pig ears in this, I would’ve assumed it was plant-based.

It’s a rich yet refreshing dish, with a variety of spicy, sweet, and savory flavors. Generally speaking, it works pretty well, but I would’ve liked a more pronounced pork flavor–or at least the pig ear to deliver the advertised crispness, as that would’ve helped with the texture. Nevertheless, we’d recommend this. It’s fun and inventive, and generally succeeds more than it fails. 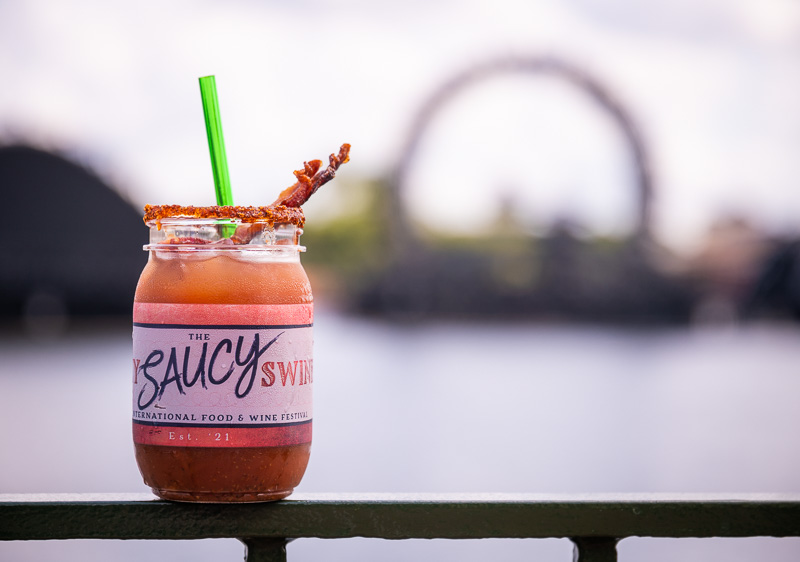 Bourbon Bloody Mary with Labrot & Graham Woodford Reserve Bourbon Whiskey ($11) – We don’t normally review drinks, but have to make an exception for one embracing the two essential Bs: bacon and bourbon.

This is the one thing that does seem to recapture the lightning in a bottle of the first-year Flavors from Fire, which is the iconic drink. This isn’t quite as good or surprising as the Swine Brine, but it’s still worth mentioning and recommending. The bourbon packs a punch and delivers a next-level bloody mary. It’s an excellent savory and salty drink, which is a nice change of pace from the overpowering sweetness of novelty drinks at Walt Disney World. 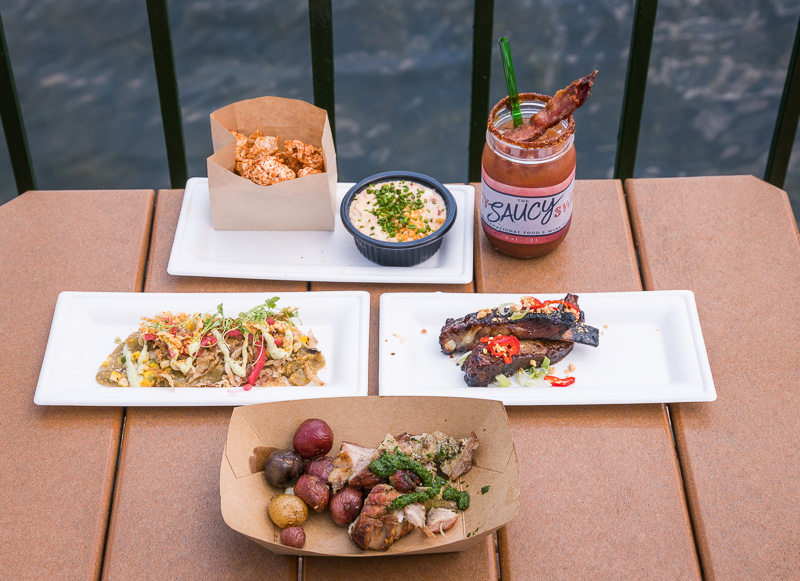 It’s simply a matter of execution and tweaks, which might be simple enough next year–or even the course of the 2022 Epcot Food & Wine Festival. Here’s hoping that it lives up to the hype of that magnificent meat moniker, as the Swanky Saucy Swine could be something special.

If you’ve tried any of the cuisine at the Swanky Saucy Swine booth, what did you think? Portion-size or quality-wise, did you have better or worse luck than us with what you ordered? Have you tried any of the drinks at this Global Marketplace? What was or was not worth the money? Do you agree or disagree with our food reviews? Questions we can help you answer? Hearing your feedback–even when you disagree with us–is both interesting to us and helpful to other readers, so please share your thoughts below in the comments!