Given that this is the first year of the Osborne Family Spectacle of Dancing Lights at Walt Disney World since Jennings Osborne, the creator of the light-show upon which the Disney version is based, I’d like to think these angels take on a bit of a special meaning. These lights obviously meant a lot to
Read More
Another November is upon us, which means it’s Thanksgiving Christmas season at Walt Disney World. Below you’ll find a brief overview of what to expect this year, with an emphasis placed on what is new for 2011 Christmas Walt Disney World trips! Magic Kingdom Mickey’s Very Merry Christmas Party — This after-hours party featuring all
Read More
What do you get when you leave your camera’s shutter open for 239 seconds during the fireworks portion of Holiday Illuminations at Walt Disney World? This. This is a single-exposure shot of the fireworks, pretty much straight out of the camera (it has been sharpened and I removed an odd spot of lens flare). Although
Read More
Don’t expect the Train Station to look this pretty decked out with Christmas decorations in 2011, as the powers that be have left the “Let the Memories Begin” marketing out to clash with the Christmas decorations. Although I’m not a fan of the “Let the Memories Begin” decor in front of the Train Station, it
Read More 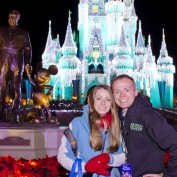 If you’re a Disney fan, there is no better place than Walt Disney World to have your photo taken to use in your annual Christmas cards. With so many great decorations and locations within Walt Disney World, choosing the best spot can be somewhat daunting. You might find yourself with a veritable case of awesome-overload.
Read More
Halloween isn’t even a distant memory, and Thanksgiving has yet to happen. Yet retailers and cities are already beginning to roll out the Christmas decorations. Soon, so will the Brickers! Tonight, actually. I have plenty of excuses as to why (we won’t be at home much between now and Christmas, so we want to get
Read More
There’s something about a beautiful fountain in a swanky hotel’s lobby that’s filled with suavely-dressed businessmen that just makes you want to lace up your sneakers, grab your camera, and lean into the fountain and take a few photos. Of course, the key is to quickly lean out and make haste as you walk away,
Read More
Happy Halloween! Although this photo doesn’t SCREAM Halloween at Walt Disney World, I think it embodies the best aspects of Halloween and any Walt Disney World vacation: the fall colors on Main Street, USA and seeing Cinderella Castle looming in the distance. There is nothing quite like seeing Cinderella Castle in the distance (well, except
Read More
When the clock strikes midnight during Mickey’s Not So Scary Halloween Party in Walt Disney World’s Magic Kingdom, there is not a body in sight! Living or…undead! If you like this Disney photo, please help us out by clicking the +1 button above to increase DisneyTouristBlog.com’s visibility on Google (no Google account necessary). If you
Read More
This may appear to be an ordinary photo of Partners and Cinderella Castle in Walt Disney World’s Magic Kingdom, but it is not! This lighting on Cinderella Castle only is used during Mickey’s Not So Scary Halloween Party, and the flowers in the bed surrounding Partners are only out for the fall. I cannot stress
Read More
I decided to deviate from my normal processing, and give this photo of one of the Halloween Fab Five statues in the hub at Walt Disney World’s Magic Kingdom a more “fall-like” treatment, with a sepia-like look to it. The hub really looks great during the fall, and these statues are a big reason why!
Read More