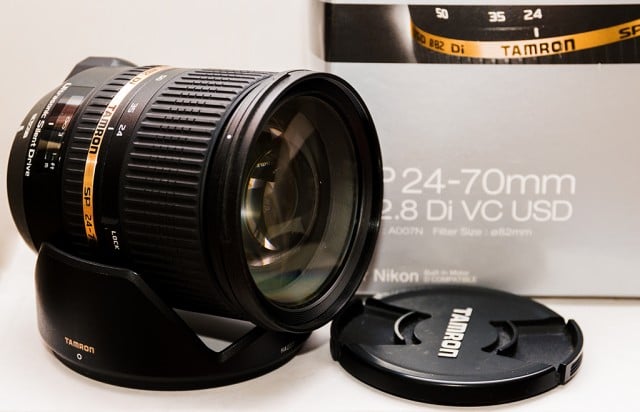 This review covers the pros and cons of the Tamron 24-70mm f/2.8 VC, including its biggest feature: image stabilization. Being the only 24-70mm f/2.8 lens to have stabilization (Vibration Compensation in Tamron parlance), this lens is a pretty big deal. It’s also significantly cheaper than its Canon and Nikon OEM counterparts, thus almost begging the question: “is this lens too good to be true?”

That’s what I wondered when I first purchased this lens. I had previously purchased the Nikon 24-70mm f/2.8, and returned it after a few weeks of use because I was disappointed by its performance versus its cost. (Perhaps my Nikon 14-24mm f/2.8 had created unrealistic expectations?) It’s not that there was anything wrong with the Nikon 24-70mm f/2.8, but for its price, it was sort of a blah lens. Sure, it produced some really sharp photos and as a mid-range walk-around zoom it covered arguably the most important focal range, but I just didn’t feel like the lens had any tricks up its sleeve.

With that very subjective description, now is probably a good time to mention that this is a “real world” review, meaning that it’s based on my use of the lens in the regular course of taking photos in the field and how I felt about it as a result. It’s not based on arbitrary photos in a sterile lab–because no real photographer is out there shooting lab charts for fun or for clients. As an actual photographer taking real photos, I see more value in how the lens performs during ordinary shooting, and how edited photos from it look. If you want to stare at a bunch of photos of sharpness and color charts cropped to 100%, this is the wrong review for you.

Anyway…after returning the Nikon, I decided to buy the Tamron. The 24-70mm is a lens most full frame photographers should have in their bag, and I was intrigued by the image stabilization. Plus, I figured if it was going to be a boring lens, I might as well ‘downgrade’ and save a bit of money. I knew I would end up needing this focal range, anyway.

Fortunately, it turned out not to be the boring lens I was expecting…

It not being boring is almost completely the result of the image stabilization. I shoot in a lot of low-light situations where tripods just aren’t feasible, so getting a couple extra stops from image stabilization is huge. Often in the Disney theme parks, using a tripod in low light is impractical or flat out not allowed (as is the case at Tokyo Disney Resort). I could not use a tripod for the above photo, but I was able to shoot a .5 second exposure handheld for a reasonably sharp photo. This allowed me to keep the ISO lower, which gave me more latitude during post-processing.

I’ve been able to walk away with keepers at 1+ second second handheld exposure times, which amounts to around 4 stops of image stabilization. This won’t matter to everyone, but for me it is huge. If this does matter to you, right out of the gate, the Tamron 24-70mm f/2.8 VC has a significant advantage over the OEM Nikon and Canon lenses.

In addition to nighttime when I’m without a tripod, I’ve found this especially useful at sunset when I don’t want to use a tripod. I know, I know, you should always use a tripod at sunset, but I prefer the agility of shooting without one, which allows me to bounce from spot-to-spot, chasing the light and going for a higher quantity of shots. With the image stabilization, I often drop down to about 1/10th of a second, fire off two bracketed sets of shots (the second just in case there was an issue with the first set) and go on my way. The image stabilization of the Tamron 24-70mm f/2.8 VC allows me to spend less than 30 seconds in a single spot, as opposed to ~5 minutes if I had to setup and take-down a tripod in each location.

Where the Tamron 24-70mm f/2.8 loses a bit of its advantage over the other 24-70mm lenses (or the Nikon, at least), is in terms of bokeh. Even at 70mm and f/2.8, I would only describe the bokeh with this lens as okay. In fairness, the bokeh isn’t great on any of these lenses. That’s the nature of the beast. The focal length is not long enough on the mid-range walk-around zooms and the aperture is not wide enough to ever give something truly buttery.

You’re going to also need a prime or two in your bag for that. (I carry the Sigma 35mm f/1.4 for sweet, sweet bokeh.) In terms of creating subject-background separation, the Tamron 24-70mm f/2.8 works well, but the out-of-focus area quality here lags just a hair behind the Nikon, as it’s a bit busier. It’s not enough for me to switch to the Nikon, but there is a difference.

Where I’ve found there is no discernible difference between the Nikon 24-70mm f/2.8 and Tamron 24-70mm f/2.8 is when shooting at night, on a tripod at apertures around f/8 to f/16. In this scenario, both lenses are tack sharp from corner to corner.

Since the Nikon costs around $600 more, any area where these two lenses are more or less the same is “Advantage: Tamron.” For $600, the Nikon should be noticeably better than the Tamron in virtually every regard…but it’s not.

In owning the Tamron for around a year and a half at this point, I have found it to be incredibly sharp. I own some other really sharp lenses like the Sigma 35mm f/1.4 and the Nikon 14-24mm f/2.8, so I have pretty high expectations in this regard.

I have noticed in some images that my corners are soft up until around f/5.6 with the Tamron 24-70mm f/2.8 VC, and I don’t ever recall having this issue with the Nikon. As a practical matter, this really hasn’t been an issue for me. If I’m shooting below f/5.6, I’m typically trying for some background separation, and I expect the entire background, including the corners, to be out of focus. About the only time when it’s an issue is when shooting low-light landscapes without a tripod. As you can see in the photo above, the corners are sharp at the f/8-11 apertures I typically use when shooting on a tripod.

In terms of other issues, everything else is extremely mild. I have noticed chromatic aberrations from time to time, but nothing even remotely concerning, and nothing that wasn’t easily eliminated with the check of a box in Adobe Camera Raw. There’s also some minor distortion at 24mm, but this is normal (no different from the OEM lenses), and again, easily fixed by applying the lens profile in Adobe Camera Raw or Lightroom. Neither of these things concern me in the least.

Otherwise, I see no weaknesses with this lens. The autofocus is quiet, fast, and accurate. Build quality is solid. It has weather sealing. Lens flare (something I love) is pretty good. The lens really has a lot of things going for it, and no hangups that give me hesitation about using this lens over the Nikon 24-70mm f/2.8.

Overall, the question for me when I bought the Tamron 24-70mm f/2.8 VC was whether the image stabilization it offers is good enough to make up for other shortcomings as compared to the Nikon 24-70mm f/2.8. The image stabilization turned out to be a big advantage right off the bat that, for me, was probably insurmountable for the other 24-70mm lenses. That advantage was cemented when I realized that the main weaknesses of the Tamron 24-70mm f/2.8 VC as compared to the Nikon 24-70mm f/2.8 were essentially slightly harsher bokeh and slightly softer corners, both of which were barely noticeable. The Nikon certainly didn’t have the big image quality advantages I expected, or that it should have given the price. This really says more about the Tamron lens than it does the Nikon.

If you do want to purchase this lens—or anything else from Amazon, please use the links here (like this one). You can also find this Tamron 24-70mm f/2.8 VC lens on B&H Photography by clicking here. Using the links here help support this blog at no cost to you, and help us continue to provide you with borderline-okay content.

What do you think of the Tamron 24-70mm f/2.8 VC? Do you think the vibration compensation makes this lens a worthy option over the Canon and Nikon OEM lenses? Any complaints about it? Share your thoughts about this lens and any questions you might have in the comments!