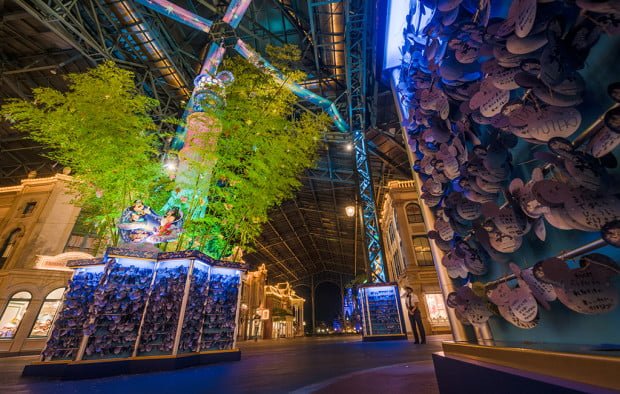 Tanabata Days or (ä¸ƒå¤•) is the traditional Japanese Star Festival and is held annually at Tokyo Disneyland and Tokyo DisneySea June 24 through July 7. During the special event, there are decorations, short Tanabata greetings in each park, special menu and merchandise items, and Wishing Places in each park and at the monorail stations for guests to write Wishing Cards and hang them on posts in the parks. This post features some photos from Tanabata Days at Tokyo Disneyland, as well as thoughts on the event.

Tanabata Days is one of the shortest festivals at Tokyo Disneyland, immediately following Disney’s Easter and lasting only two weeks until the traditional date of the Tanabata, on July 7. Because the celebration is so short, there really isn’t a ton to it. It’s just one of those nice little touches that is cool to see, and probably not a reason to book a trip to Tokyo Disney Resort (at least not for a visitor traveling from overseas).

Because there’s really not a ton to this, I feel compelled to pump up the word count of this blog post with a drawn out story of the origin story of the Tanabata that I’ve pieced together from several highly reliable sources, such as Wikipedia and random unvetted Japanese blogs. This site is nothing if it isn’t where you all come for your daily dose of knowledge. 😉

Let’s start with that, and then cover some of what Tokyo Disneyland has to offer for Tanabata Days… 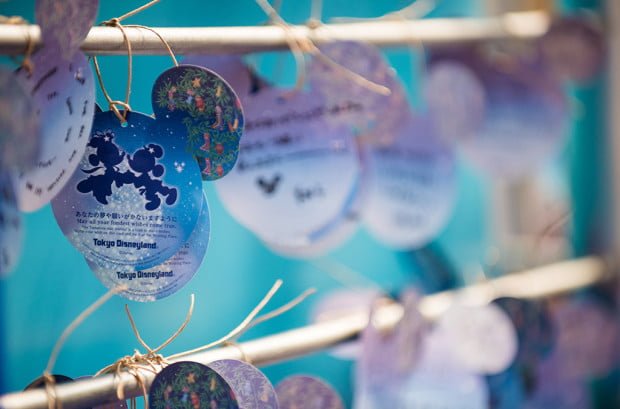 As legend goes, Orihime is the daughter of the Tentei, the Sky King, who wove beautiful clothes by heavenly river Amanogawa (Milky Way). She weaves to please her father, but because of her dedication to weaving, she is never able to meet and fall in love. This concerns Tentei, who arranges for her to meet Hikoboshi, the cow herder who lived on the other side of the Milky Way. The two fell in love instantly and married. Their love and devotion was so deep that Orihime stopped weaving for Tentei, and Hikoboshi allowed his cows to wander the heavens.

In anger, Tentei separated the two lovers across the Milky Way and forbade them to meet. Orihime became despondent at the loss of her love and pleaded with Tentei to allow her to see Hikoboshi again. Tentei loved his daughter and was persuaded by her tears, so he decreed that on the 7th day of the 7th month if she worked hard and finished her weaving. The first time they tried to meet, there was no bridge over the river of the Milky Way for them to cross. Orihime cried so much that a flock of magpies came and made a bridge with their wings so that she could cross the river. It is said that if it rains on Tanabata, the magpies cannot come and the two lovers must wait until another year to meet. Consequently, the Japanese typically wish for good weather on the Tanabata so that the lovers may meet. So basically, it’s the story of Romeo and Juliet crossed with a bit of that one Pirates of the Caribbean sequel and a dash of The Little Mermaid thrown in for good measure. Or something like that.

In Tokyo Disneyland, guests can find a Wishing Place in the center of World Bazaar. Mickey and Minnie Mouse will ride on rickshaws along the parade route and can also be spotted in a “Tanabata Greeting” mini parade.
In addition to the theme parks, the Disney Resort Line Monorail stations will also offer a Wishing Places and original Wishing Cards. 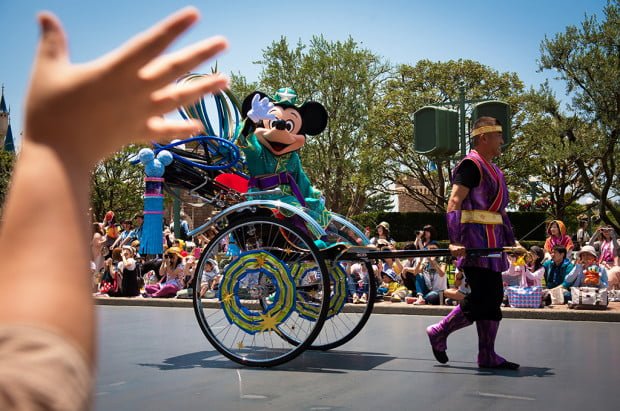 The Wishing Place and Tanabata Greeting are the main elements of Tanabata Days, and the Greeting is pretty low key. It’s simply Mickey & Minnie in traditional kimono, plus a band and a few princesses. Most guests stake out spots “only” 30 minutes or less in advance, which should be indication of its scale. The costuming is excellent and it has a nice soundtrack, but it’s nothing to plan your day around. 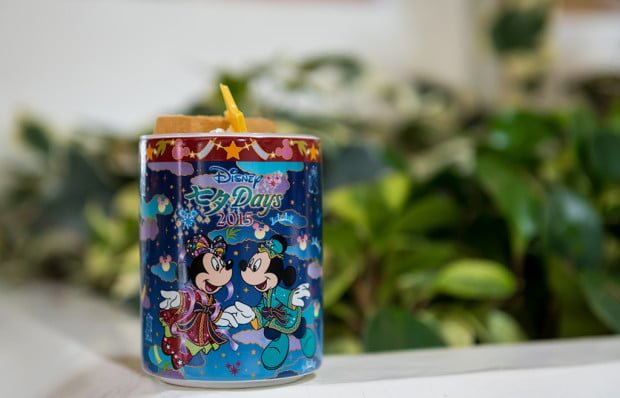 As with any good celebration, there’s also special merchandise and menu items. For the menus, it’s mostly shaved ice, and almost every popular snack spot (at least the ones we frequent) has a special shaved ice. The number of choices is pretty impressive, as is the inventiveness of the shaved ice options, but this should come as no surprise given how seriously Tokyo Disneyland takes snacking. These are my people. 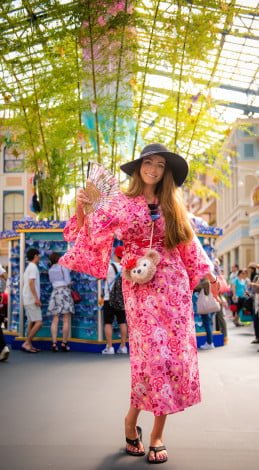 Merchandise consists mostly of a couple of plushes, pins, buttons, and little things with the Tanabata Days logo, but there also are awesome kimonos. We couldn’t resist the kimonos, which are not only a rare piece of Tokyo Disney Resort location merchandise, but also are unique. 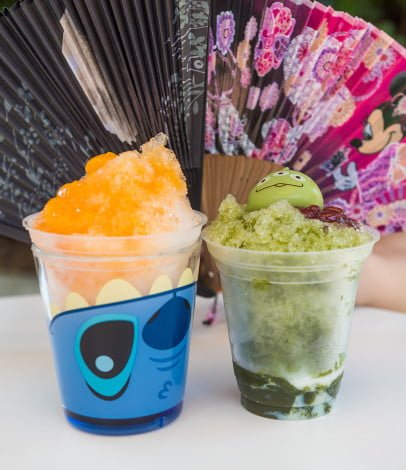 World Bazaar is packed with guests during Tanabata Days, from park opening until the last guests are herded out by security at park closing. I noticed many guests in traditional kimonos, and stopped a few to ask if I could take their photos. When I do this, I typically use pantomime to convey the question, pointing to my camera, then to them, and asking the question in English. The vast majority of the time, people I ask in the parks are flattered to have their photo taken. Sometimes, they then ask if they can get a photo with us.

It turned out that two of the guests I asked happened to be Disney fans, Moko and Kaho, with whom we had been interacting on Twitter and planning to meet up with later in the day. Talk about coincidence! 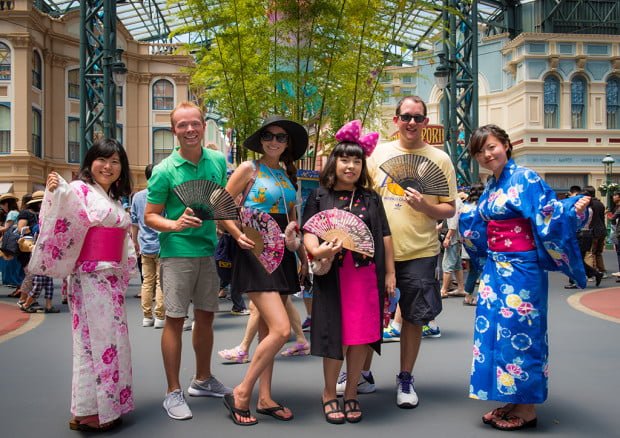 While this is a relatively small scale celebration, as a Westerner, it is one of my favorites. We planned our trip to coincide with the end of Disney’s Easter and start of Tanabata Days specifically so we could see the celebration (and also because we really enjoy rain and humidity). While most special events at Tokyo Disneyland are based upon Western holidays that have been embraced by Japanese culture as part of the All-American appeal of the Disney theme parks, Tanabata Days celebrate something that is more on the traditional end of the Japanese cultural spectrum.

I think Tokyo Disneyland always has its own unique anthropological appeal as there is cultural appropriation of American customs that is really fascinating, but Tanabata Days creates an “East Meets West” vibe. There are a lot of guests in kimonos, and given the gathering of people near the Wishing Place in World Bazaar, it’s clear this is a practice that is taken seriously by many Japanese people. Given my belief that Tokyo Disneyland is one of the most authentic (as bizarre as that may sound) slices of culture that most American tourists will see on a visit to Japan, this just heightens the experience for me. 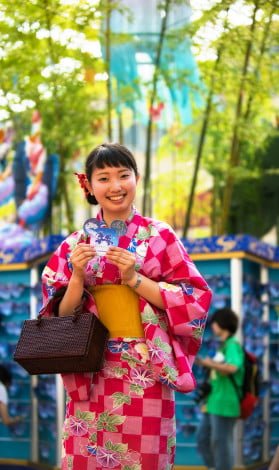 Overall, Tanabata Days are a really cool, small celebration that showcases a small slice of traditional Japanese cultural. It’s certainly no replacement for visiting a World Heritage site in Japan or wandering the streets of Kyoto, but definitely is interesting seeing Americana meet Japan…icana(?) So long as you don’t go in expecting one of the lavish parades or stage shows for which the Tokyo parks are known during their special events, you won’t be disappointed with Tanabata Days.

Do Tanabata Days look interesting to you? Have you been to Japan during Tanabata? If you have any other comments or questions, post them below and I’ll try to answer!