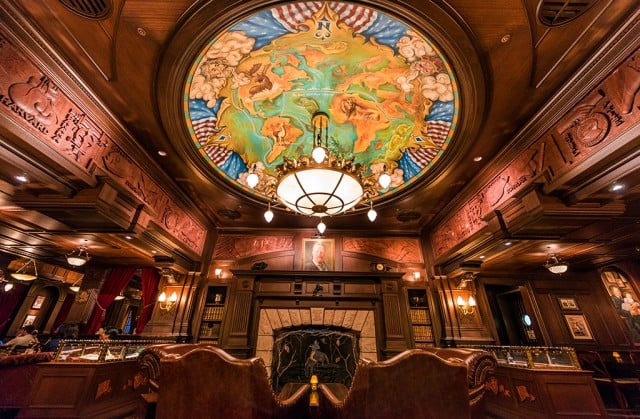 Teddy Roosevelt Lounge is a bar in Tokyo DisneySea aboard the S.S. Columbia. Let that sink in for a moment. A bar in Japan. Honoring an American President. On a classic American ocean liner. It’s pretty crazy. Teddy Roosevelt is the quintessential American badass, and it’s fitting to see him honored with a bar.

If Teddy Roosevelt lived in today’s internet age, I have scant doubt that people would write “Teddy Roosevelt Facts” instead of frivolity with Chuck Norris, Jack Bauer, and Liam Neeson. Except with Teddy Roosevelt, they’d all be true. This lounge treats him as such, regaling guests with some epic Teddy Roosevelt legends/fables.

Setting aside the specific details of the lounge for a moment, its beauty and ambiance would be quite impressive even without the homages to Teddy Roosevelt. The woods in the lounge are rich and abound with trim and texture, the booths are all incredibly upholstered, there are overstuffed leather couches encircling a fireplace and under a beautiful ceiling mural, and the light fixtures are all beautiful. In a word, this lounge is lavish. It is an elegant and classy place to relax.

Beyond that, the level of specific detail pertaining to Teddy Roosevelt is astounding. This is one thing that continues to impress–and perplex–me about Tokyo Disney Resort. From the authenticity and quality of Jazz Era Flapper costumes worn by entertainers to the depth of a bar celebrating a US President with whom most guests are probably unfamiliar (no knock on the Japanese–I haven’t the slightest knowledge of Hideki Tojo), it’s a bit shocking.

While it is perplexing since much of this is likely lost on Japanese guests, it makes sense given that the parks are largely designed by Americans and the ownership of the Tokyo parks provides Imagineers with healthier budgets than their American counterparts.

As great as this is, my big question is: “why isn’t this lounge in a US park?” When it comes to quality like this, I sometimes feel like the US parks get slighted. In some cases, rather than going for elaborate and authentic, the cheaper and easier route is taken in the US.

We get the boxes on wheels of the Move It! Shake It! street party instead of detailed and period-appropriate floats, among other examples. These shortcuts by Disney are then vindicated by some fans, who don’t stress over the little things so long as ‘kids love it.’ (I’ve got news for people who say that: kids love anything, so that isn’t exactly a resounding seal of approval.) 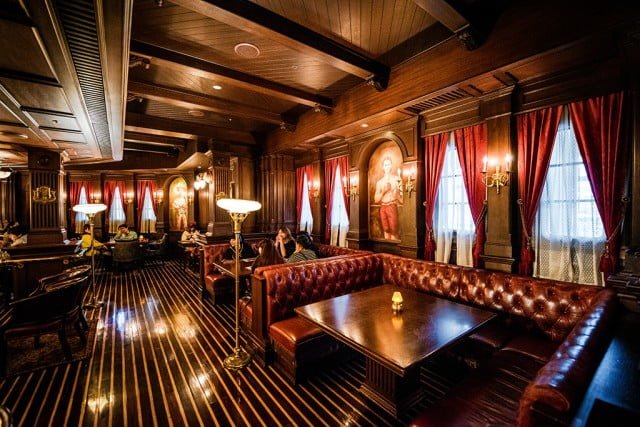 I realize Disney Parks aren’t hotbeds for intellectuals, but sometimes it seems the US parks condescend, treating guests as if they just finished a marathon of ‘Duck Dynasty.’ People will largely comport with the standards and quality presented to them, so instead of setting the bar low, maybe Disney could try to aspire for more. 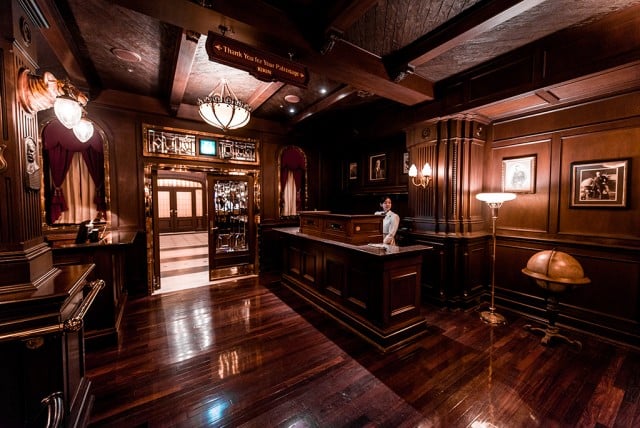 Once you pass through the detailed glass doors, you enter the lobby, with the bar immediately beyond that, and the lounge the deepest (and largest) part of the space.

Here’s the bar itself. This bar is surrounded by paintings and photos of Teddy Roosevelt, most of which seemed to be from his days with the Rough Riders. You can just see a fraction of what’s on display in the photos here, as most are directly above the bar seating area below the vaulted ceiling. 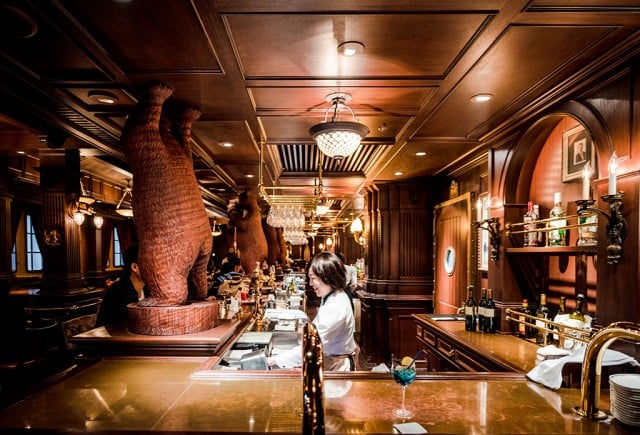 The ceiling of the bar is “supported” by four large grizzly bears, which I’m told are hand carved. As Teddy Roosevelt was an avid outdoorsman and sportsman, you’ll notice the motif of (big game) animals throughout the lounge. 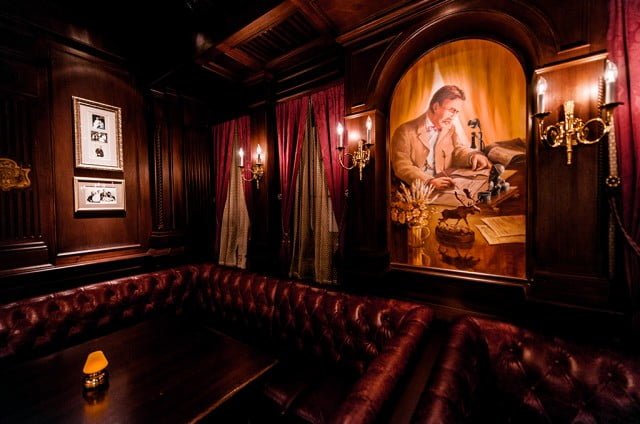 Moving along to the lounge area, one of my favorite details is the large paintings of Teddy Roosevelt outside the perimeter of the lounge at various stages of his life. Here’s President Roosevelt in office (with a moose statue on his desk).

Above is a wide look at one side of the lounge. The closest mural in this frame depicts a young Teddy as a boxer. 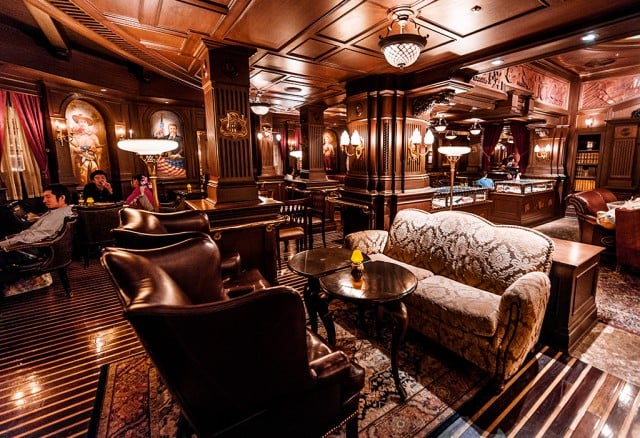 The booths form the ring around the wall of the lounge, with seats for casual cocktails and relaxing arranged towards the inner area of the lounge. The photo above really encapsulates why I find Teddy Roosevelt Lounge to be so impressive: the hard wood floor, woven area rugs, textured couches, hardwood tables, libraries of hardbound books, and leather couches are unlike what you’d find in a Walt Disney World lounge.

Part of this is probably the respectful nature of the Japanese and the clientele–I’ve never seen a stroller or child inside the Teddy Roosevelt Lounge. 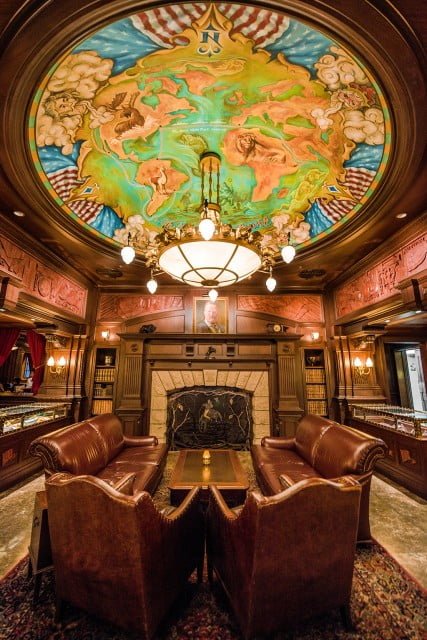 Then there’s the innermost part of the lounge, which I consider to be the absolute highlight of Teddy Roosevelt Lounge. Beautiful leather couches and chairs arranged around a fireplace and under a beautiful mural painted on a rotunda. 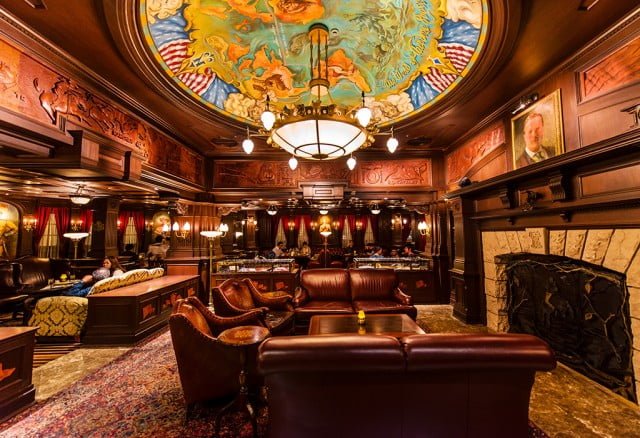 The walls below the rotunda have carvings related to Teddy Roosevelt’s life, and below those walls are display cases with antiques from his life and Presidency. 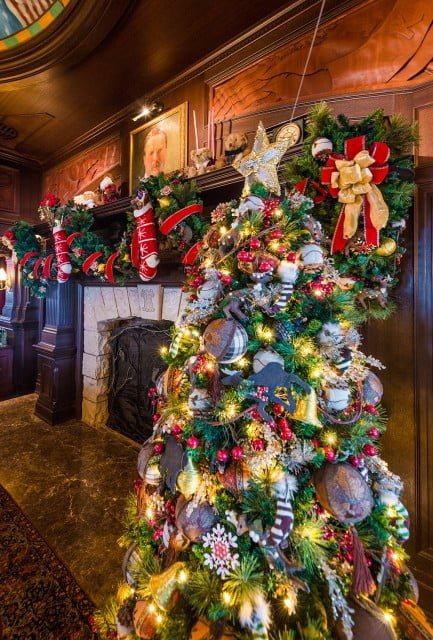 This area is pretty awesome any time of year, but that’s amplified at Christmas, when a Roosevelt-inspired Christmas tree is set up beside the fireplace, stocking are hung above it, and the mantle is lined with teddy bears. 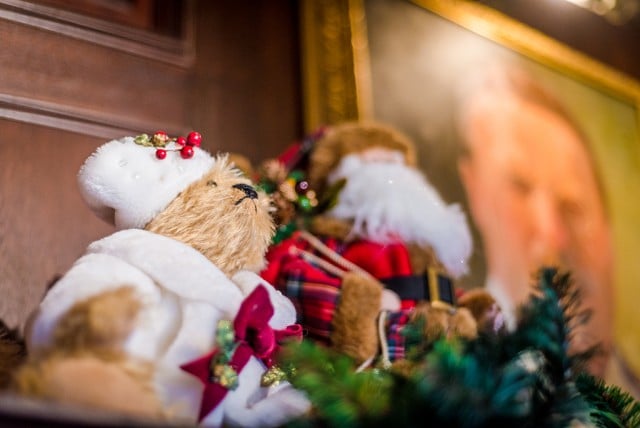 These appear to be vintage mohair teddy bears–the kind that would have been produced at the time and are now highly collectible and pricey–and they are right within reach of any guests passing by the fireplace. Yet when I saw them, they were all in mint condition. 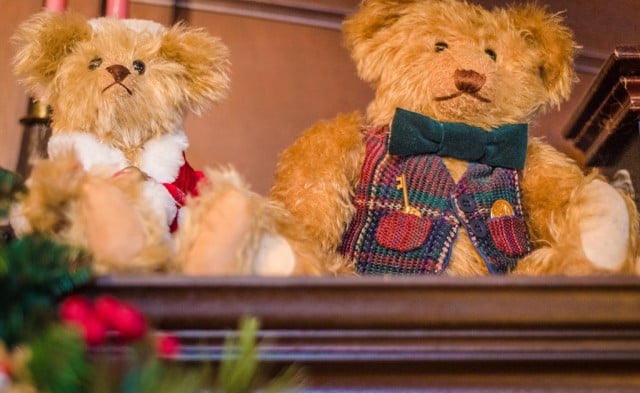 The Christmas decorations, as a whole, are really thoughtful and much more than just a generic tree with hunting ornaments. It’s clear a lot of work was put into designing the spread, as is the case with all of the decor in the lounge. 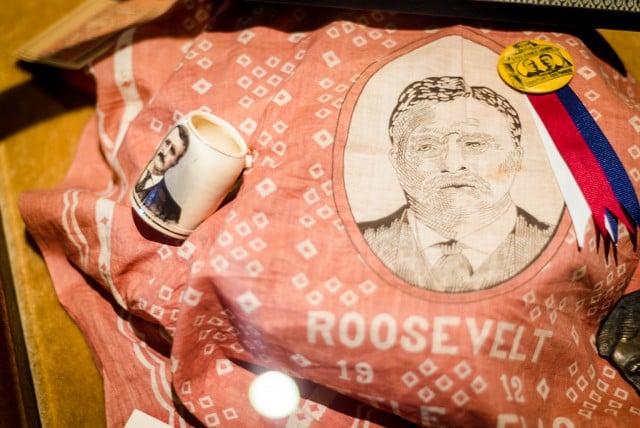 Here’s an example of some of the things in the display cases in this area. I’d hazard a guess that these are authentic antiques that Imagineers purchased. 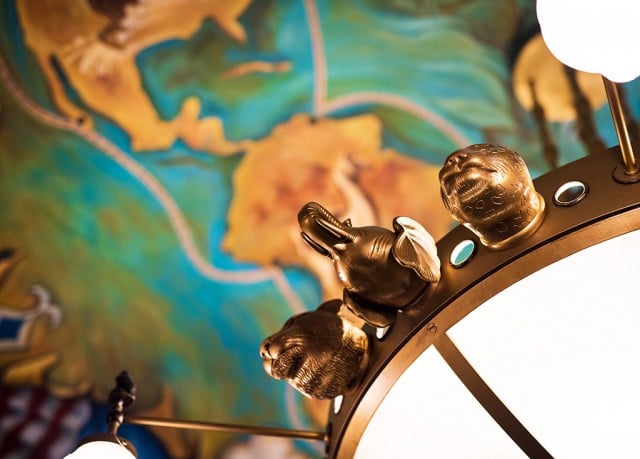 There are a lot of animals on the light fixtures, from these guys to tigers throughout the restaurant that hold lamps in their mouths. 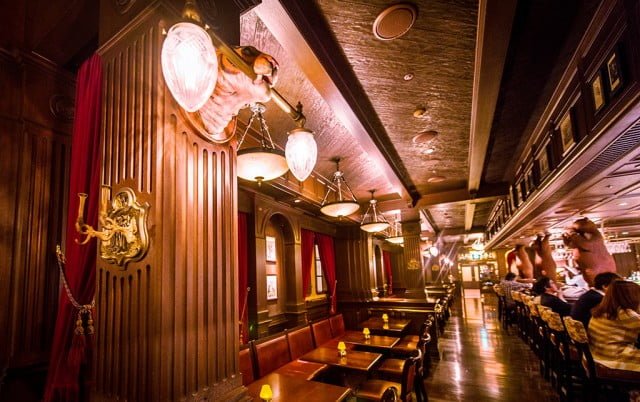 I think it’s fair to say just about any environment could be improved by adding a tiger holding lamps in its mouth. 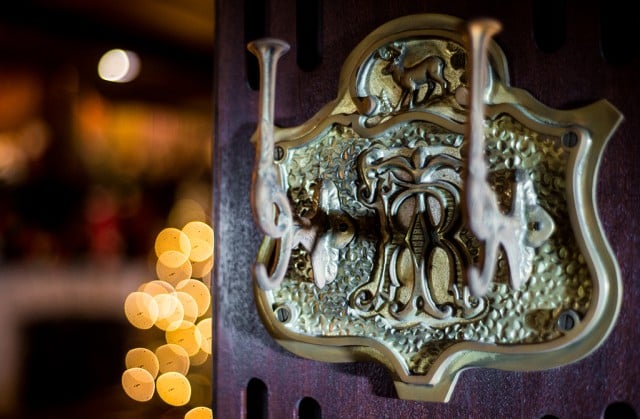 Teddy Roosevelt Lounge is a classy place, so of course there are coat hangers throughout the restaurant so you don’t have to throw your coat over the back of your chair. I was expecting to hang my coat on the tooth of a tiger, so this is a little disappointing, but still… 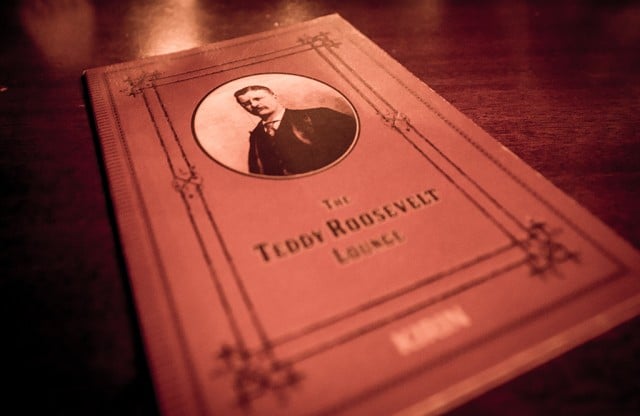 I’ve probably gushed about the interior of the Teddy Roosevelt Lounge enough, so it’s time to gush about something else: the food and drinks! 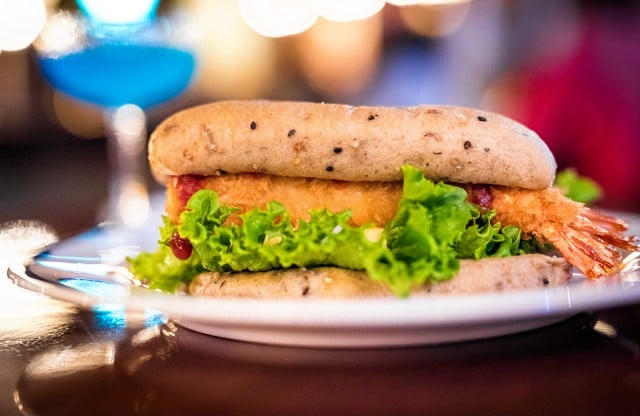 Those of you who I didn’t lose with the first sentence of this article when I wrote “…in Tokyo DisneySea” I might have lost when I wrote “bar.” As the details should demonstrate, it’s so much more than bar, but even from a utilitarian perspective (although what’s the point in a theme park if you’re viewing things from a utilitarian perspective?) it’s so much more. In fact, we’ve been to Teddy Roosevelt Lounge numerous times, and I’ve only once even had a drink!

The lounge has a food menu with prices in line with counter service restaurants around the park, and several good options. Basically, you’re getting a table service meal in an awesome setting at counter service prices (and remember, there’s no tipping in Japan). Even if you’re not a lush, this makes Teddy Roosevelt Lounge a must visit. 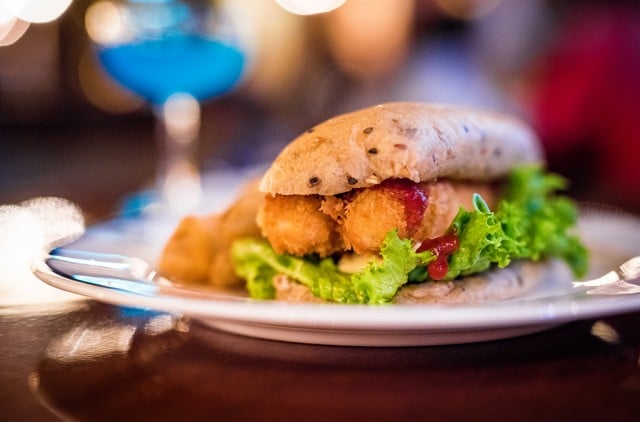 My favorite thing on the menu is the prawn sandwich. Simple, yet well prepared, it’s delicious and costs around $10. 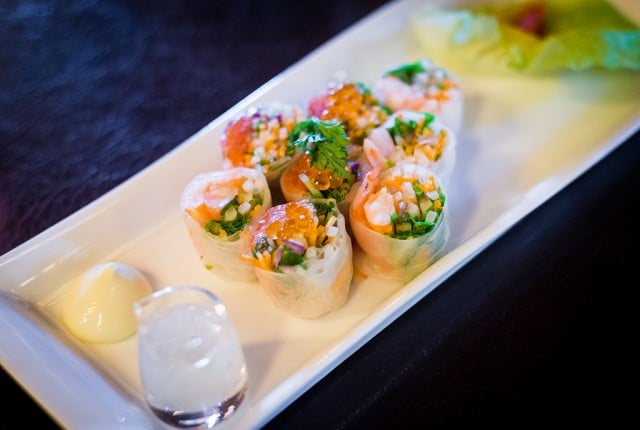 These are the smoked salmon, trout, and shrimp spring rolls. Also about $10, these are also really good, but they are more “lounge food” in the sense that they are something light for the table, but aren’t going to be enough for a meal. 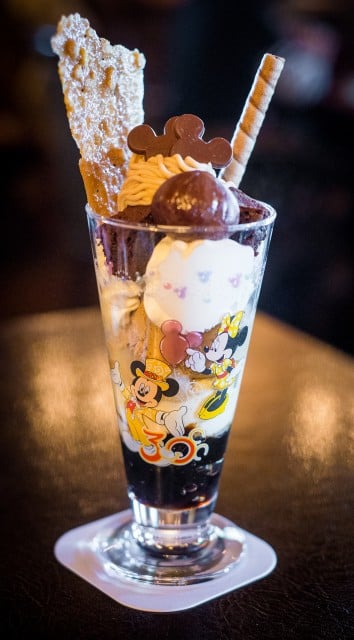 There is always a special dessert (and drink) served in a collectible cup that you can take home with you. On one of our visits, it was this delicious “spaghetti” ice cream sundae. On the other side of this glass is an awesome logo (same as on the coat hanger pictured above). I wish there were a photo of Teddy Roosevelt boxing a polar bear on this side, as the Mickey & Minnie balloon art is sorta weak. 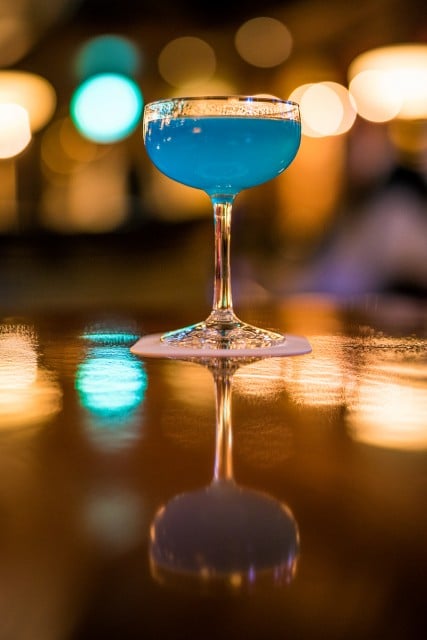 If I recall correctly, the drink menu here is about 10 pages long, with every page a solid wall of text. It lists every drink that the bartenders know how to make. There are also several different beers on tap, and many bottled beers. 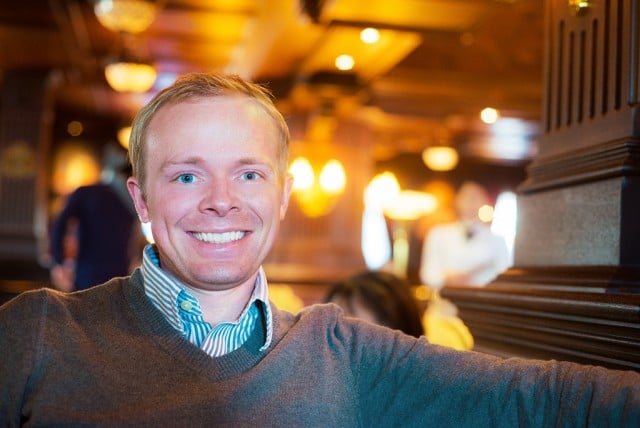 Relaxing in the Teddy Roosevelt Lounge will cause you to feel a Presidential aura. There probably have been scientific studies demonstrating that if you sit here long enough, you will obtain the skills necessary to be President through osmosis, or something like that.

Overall, Teddy Roosevelt Lounge is far and away the nicest lounge in any Disney theme park, anywhere. Everything here is spot-on, and I really can’t say enough good things about this place. If you visit Tokyo Disney Resort, this is a must visit, both as a restaurant and as a themed environment. It’s one of many examples of how Tokyo DisneySea is such an amazing park, as so many of the details and homages to Teddy Roosevelt could probably be described as superfluous since they are going to be lost on 99% of guests. Still, they add so much to the experience, and demonstrate that the “Disney Difference” is still alive and well…in Japan.

Does Teddy Roosevelt Lounge look interesting to you? Have you been here? Want to go here? If you have any other comments or questions, post them below and I’ll try to answer!