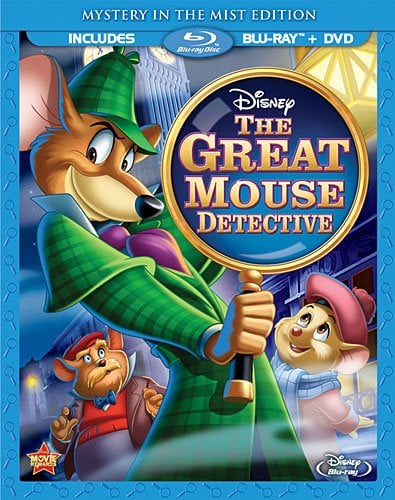 The Basil of Baker Street Blu-ra…err…The Great Mouse Detective Blu-ray‘s release has intrigued me for a while, as I’ve been wanting to watch this 1986 animated feature since first seeing the excellent Waking Sleeping Beauty, which examined the Walt Disney Animation Studios from its darkest years in 1984 until it was revitalized in 1989 with the release of The Little Mermaid up until 1994 when The Lion King was released.

Perhaps my favorite part of Waking Sleeping Beauty is the controversy surrounding The Great Mouse Detective. The film was originally to be called the infinitely more creative Basil of Baker Street (the moniker of the main character). However, after a battle with marketing, which was apprehensive after Disney had been defeated at the hands of The Carebear Movie (a classic in its own right…right?), an edict was made that the film should be renamed to something that would instantly identify it to audiences.

Alas, The Great Mouse Detective it was named. The animation team was furious, causing on disgruntled animator to react in typical Disney animator fashion (no, he didn’t doodle a caricature of Jeffrey Katzenberg), with a tongue in cheek memo. The memo indicated that the entire library of Disney animated classics would be renamed, and offered a list of those names. You can find the full list here, and you should absolutely check it out, as it’s hilarious.

What does all of this have to do with The Great Mouse Detective Blu-ray? I’m not really sure. Frames my review, I suppose. In a roundabout way, the point is that this feature was developed at an especially dark time at Disney, right as The Black Cauldron was flopping hard. Waking Sleeping Beauty tells the full story much better than me, but the point is that despite all of the uncertainty and morale around the project, The Great Mouse Detective turned out to be a pretty impressive film.

In fact, I’d go as far as to say that The Great Mouse Detective is one of the most underrated Disney films in the entire library. Many at least acknowledge it as being a precursor to The Little Mermaid, commenting that it showed Disney was beginning to right the ship, but I’d go a bit further, arguing that The Great Mouse Detective should be receiving praise for its own substantive quality, rather than as a bridge movie that took Disney towards its Renaissance.

The Great Mouse Detective works for me in a variety of ways. The animation of the main and most ancillary characters is consistent, compelling, and generally exceptional (save some scenes with Professor Ratigan), the characters themselves are almost all memorable, the backgrounds are interesting, and the story is fairly well-told and strong overall. I can’t say that The Great Mouse Detective resonated with me as much as any of the films from the Disney Renaissance, but I grew up with those films, and I can’t recall ever having seen The Great Mouse Detective, so the emotional connection simply isn’t the same. In a more objective sense, I don’t think the story works on any deeper levels the way those Renaissance films did, either.

Still, it’s a very enjoyable movie that features a mouse detective (a great one), and his sidekick as they scour the foggy streets of a London searching for a kidnapped girl. The film is incredibly fast-paced and is likely with plenty to offer for both children and animation-appreciating adults.

Although The Great Mouse Detective was released shortly after Cinderella Diamond Edition Blu-ray (our review), it did not receive the same restoration treatment. This is not to say that the transfer here isn’t exceptional, it’s just that clearly the same work was not done to it. That said, the transfer here is exceptional. There are only occasional hints of softness and noise, and in most cases, the noise is in foggy outdoor scenes when noise doesn’t necessary feel out of place. The vast majority of the time, the colors pop, the picture is incredibly sharp with excellent detail, and contrast is great. I haven’t had a chance to watch the previous DVD release, but there’s no way it could stack up to this.

Audio-wise, the movie sounds good, but nothing overly impressive. The musical numbers are solid, as is the Big Ben climax, but, as is the case with most animated films, The Great Mouse Detective doesn’t really push the limits of a home audio system.

Yawn. Big time yawn. There’s like 20 minutes worth of material here, only about 7 of which is worth watching. With all of the internal strife surrounding the release of The Great Mouse Detective, it’s really disappointing that a more comprehensive making-of documentary isn’t included. I guess Disney is “fine” with that material being in Waking Sleeping Beauty, but unwilling to include it in an animated release that it largely markets to kids. Still, there could have been a lot more.

Ultimately, if you’re going to buy The Great Mouse Detective, you’re buying it for the film and the exceptional video transfer. I’d highly recommend this release to any Disney or animation fans who don’t already own the most recent DVD, to videophiles who do own that DVD, and to parents with small children. A casual audience probably isn’t likely to gush over this film quite as much as a serious Disney fan like me, so that crowd is probably safe merely renting.