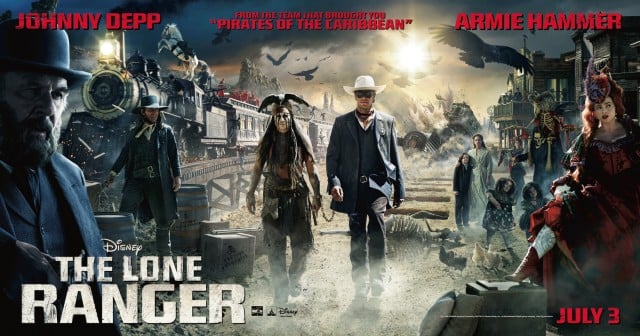 The Lone Ranger stars Johnny Depp as Tonto and Armie Hammer as the Lone Ranger as they reboot the classic franchise that was a staple of American entertainment from the 1930s to 1950s. Much has been made about this reboot and whether it would resonate with audiences so far removed from its heyday. We’ll never know the answer to that, as the possibility of the film resonating was undercut by the quality of the film. Equally contentious has been Johnny Depp’s portrayal of Tonto. Regardless of whether Depp is a Native American, I don’t see much to take offense to here. Granted, Depp’s character comes across as not being the sharpest tool in the shed for most of the film, but he is vindicated at several points. Beyond that, he’s an equal to the Lone Ranger (if not the star of the film), rather than being his simple-minded errand boy, as he was on the show.

What’s ultimately disappointing about Depp’s character is that Tonto could have had more depth, but instead Depp just plays an adapted and less interesting version of Captain Jack Sparrow. At some times, Tonto is fun and his interactions with the Lone Ranger carry dull parts of the film. At more times, the Tonto shtick stalls the film with stillborn jokes or cringe-inducing dialogue. By contrast, Armie Hammer is mostly strong in the role of the Lone Ranger (when he’s not forced to deliver tired jokes) and he does well with the squeaky clean image. William Fichtner steals the show as Butch Cavendish, the “bad guy” cannibal-bandit who makes audiences squirm with his every appearance. All in all, there’s really nothing wrong with the casting or characters beyond the treatment of Tonto, and even that isn’t terrible.

As for the movie itself, it’s all over the place. I’m convinced that somewhere beneath the mess, there’s a decent film. Unfortunately, what’s there now alternates back and forth between serious drama, attempts at cheap laughs, self-reference and parody, intense violence, and action sequences–all of which are framed by a wholly unnecessary Wild West side-show flashback (presumably a nod to the radio version–but it just doesn’t work).

The aspect that works the least is the humor. I’m not some kind of curmudgeon who dislikes using humor in films to lighten the mood–so long as the jokes land and the humor actually lightens the mood. That’s not the case in The Lone Ranger, where about 75% of the jokes and gags miss the mark. Worst of all, there are several “pause for awkward laughs” moments in the midst of action that make the movie feel like a Looney Tunes cartoon. I am a bit surprised that none of the bad guys ever ran off cliffs and paused for a few seconds only to fall to their deaths when they realized they were running on air. Beyond that, there is crude and childish humor (the low point of which is probably Tonto dragging the Lone Ranger’s head through horse feces) and running jokes that aren’t even funny the first time they’re told (such as every new person the Lone Ranger meets asking him what’s up with the mask).

Those who have seen the Pirates of the Caribbean movies will recognize some of this as just being director Gore Verbinski’s style, but this goes way past the quick one-liners sprinkled throughout those movies. Not only are these jokes not funny, but the ones in the middle of action sequences totally kill the pace, and make the viewer roll their eyes at what are already implausible sequences.

Part of me wonders if much of this humor was intended as a way to assuage the concerns of families who might take their kids to this film. It’s probably the most violent PG-13 film I’ve ever seen, with fairly graphic “war” sequences and even on-screen cannibalism. Although the cannibalism is mostly implied (you can see the scene of a man eating a heart reflected in a lifeless eye), it’s still there, as is the rest of the violence. I have nothing against violence, I’m just surprised to see Disney get away with this much in a PG-13 movie.

Because of this violence, most viewers would probably expect this to be an action movie or a dramatic western. The film ultimately could work as either, although with Verbinski and Bruckheimer attached, action would seem to be the more fitting genre. The Lone Ranger sputters a bit at its more dramatic points, and although they decently work to advance the plot, most are fairly corny. With the exception of the awkward jokes thrown in, the action scenes do work well, particularly the opening scene and the last 30 minutes of the film. This last 30 minutes is just flat out fun (albeit mindless), but by that point, you’ve had to sit through 2 hours of a mind-numbing film that didn’t know what it wanted to be.

Overall, it’s not a totally terrible movie, and I think it could be pretty good with an editor focused on fitting it into one genre (or even two!) and about 45 minutes cut from its running time. I think there is more of a story to be told here, so despite my negativity towards this film, I’m hoping it does well. There are flashes of quality here and there, and I think the filmmakers might be able to find their groove if given another shot…there certainly is theme park potential, too.

12 Responses to “The Lone Ranger Review”