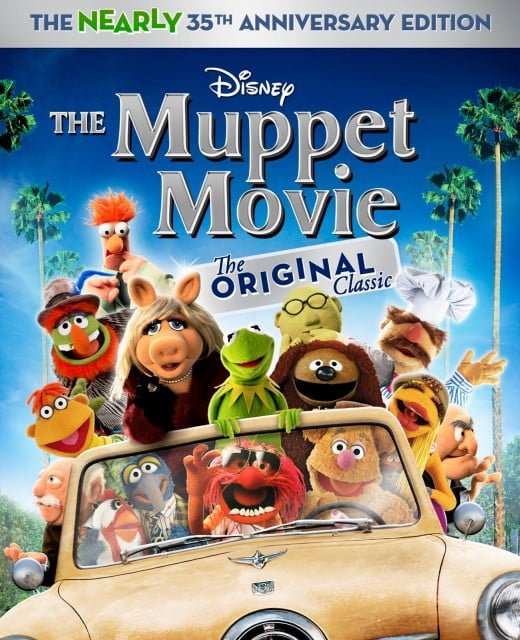 comes out right as Muppet Fever is heating up again (did it ever cool down?) as audiences anxiously await next year’s Muppets Most Wanted (after seeing an extended sequence from the upcoming film at the 2013 Disney D23 Expo, my faith has been restored that this movie will be hilarious). Of course, as the subtitle, “The Original Classic,” implies, this is the Muppets’ film that catapulted the successful television show onto the big screen, and really turned the Muppets into the powerhouse franchise that it is today with subsequent films, an animated television show, theme park attractions, and even webisodes.

There’s a reason The Muppet Movie was such a resounding success. It’s really good. Not only is it really good, but it has numerous memorable scenes, one of which, Kermit performing “Rainbow Connection,” many will count as one of the most memorable and touching cinematic songs of all time. The plot of The Muppet Movie centers around Kermit the Frog and his cross-country voyage to California, as he attempts to make it big in Hollywood. Along the way he attempts to avoid becoming the spokesfrog for a fried frog leg restaurant, and he picks up the rest of the Muppet gang to join him for some misadventures.

Any Muppet fan knows that it’s more about the journey than it is about the destination, and the plot is simply a loose vehicle for the Muppets to share their unique brand of humor. In terms of humor, The Muppet Movie shines. Those who joined Muppet-fandom with the 2011 The Muppets may not find themselves laughing at every scene, as the brand of humor has changed a bit over the years (it was a bit more dry back in the day), but it’s more or less the same. With few exceptions, The Muppet Movie has aged well, and will be enjoyed by anyone who is a fan of the contemporary Muppets. While I don’t love this film as much as I love The Muppet Christmas Carol, it’s still great. Of course, the Muppets’ quirky humor isn’t for everyone, so people who don’t enjoy fun, laughter, and happiness may be disappointed by The Muppet Movie.

The video quality is excellent, with the film not showing its 35-year old age. Textures and detail are rendered excellently, and the color saturation is great. There is a bit of grain, but rather than detracting from the image quality, it gives the film a nice cinematic look. Plus, the movie is 35 years old, and no noise at all would suggest heavy-handed noise reduction. While it does seem that some noise reduction has been applied, it has been applied judiciously. I’ve never seen The Muppet Movie look so good, and the job Disney has done with the restoration really deserves some praise.

Disney’s DTS-HD Master Audio 5.1 surround sound track is simply okay. Sound isn’t quite as crisp as I’d hope, nor are the individual tracks very dynamic. This could be in part due to the film’s age, but I suppose I would have expected Disney to freshen up the audio (while maintaining its integrity). Animal and the whole Electric Mayhem Band deserve to rock out a little better than this.

Unfortunately, the extras are a complete letdown. There’s a cool 18-minute camera test of the characters, but other than that, the only thing worthwhile is the humorous Disney Intermission. (There are also trailers and a sing-along.) There’s no making of documentary. This is incredibly disappointing given the effort required in transitioning the Muppets to the big screen, and the tension between Jim Henson and director James Frawley. Although it has been 35 years since the film’s release, many of those involved are still alive, but there’s only so much time to produce an extensive documentary. This film certainly deserves one.

Overall, the video quality is very solid, the audio is okay, and the extras are a letdown…but the good news is that the film is a classic! It’s just too bad that it didn’t receive the top to bottom treatment that it deserved. Ultimately, you probably don’t need this review to tell you whether this title is for you. Most Muppet fans probably know that it’s a must-own for them, and those who aren’t fans of the Muppets probably aren’t interested to begin with. If you do fall in the category of those who enjoy The Muppets, but aren’t a super-fan, I’d recommend renting this (or watching it on Netflix) rather than buying.

Buy this Blu-ray on Amazon by clicking here.

Will you be picking up The Muppet Movie on Blu-ray? Any opinion on the extras? Do you think it’s a movie worth owning? Share your thoughts in the comments!