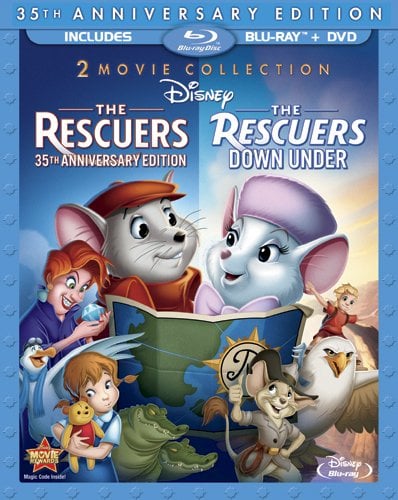 The Rescuers and Rescuers Down Under 35th Anniversary Blu-ray is the latest 3-Disc Blu-ray and DVD combo pack from Disney. Although one of these films is now 35 years old, the two movies look quite good on Blu-ray.

As far as story goes, you’re probably familiar with the story of The Rescuers films by now. The films share the adventures of two mice, Miss Bianca Bernard as they attempt to save children from bad guys. The mice are agents in the Rescue Aid Society, a secret, international organization that rescues kidnapped children. Both films essentially follow the same general storyline, with one set on the bayou and the other in Australia. Along the way, the mice meet other animals who help and/or hinder them in their attempts to rescue the kids.

I’m largely indifferent to these films. I remember absolutely loving The Rescuers Down Under when I first saw it as a kid, but as an adult, it doesn’t resonate with me as much as other Disney animated films. It’s definitely a juvenile animated movie. However, even though it follows the same story arc as its predecessor, it’s not a crumby sequel. Both movies are good, but neither are great. If you are not a fan of The Rescuers, you probably need not purchase these titles…unless you must own every Disney film.

It’s always concerning when two films are packed on the same Blu-ray, but thankfully, there’s no evidence of compression problems here. Both films look great. Be advised that The Rescuers is a product of its generation, so there is grain and stray pencil marks, but such was the animation style of the era. The Rescuers Down Under looks much cleaner, but its source was also cleaner. Both films look great overall, with animation that pops throughout. Honestly, I can’t remember the last Disney Blu-ray I’ve seen where the video quality was less than stellar. Disney’s Blu-ray team has been doing a great job as of late.

The sound is also very well done, although nothing mind-blowing. These are not movies that relied upon impressive soundtracks to wow moviegoers. Success here is measured largely by whether the remixes are distracting or over the top. They’re not. The 5.1 DTS-HD MA soundtrack is solid and well-mixed.

The extras here are pretty random. You have a deleted song, sing along, and short (11 minutes) making of–these all make sense. Then you have a longer documentary about birds and a Silly Symphony–these have only a tenuous connection to them film. The latter two extras are by far the best of the set, so I guess I can’t complain too much!

Overall, The Rescuers 2-movie Blu-ray set is a solid release into the Disney animated film library, but its the movies themselves that should determine whether you make the purchase, rather than the Blu-ray set. If you’re a fan of these movies, buying makes sense, especially given the solid audio/visual quality. If you’re indifferent to the films like me, there’s really no reason to buy. The extras aren’t very compelling and these are probably not movies you’ll watch too often.

Buy this Blu-ray/DVD on Amazon by clicking here. Have you seen The Rescuers movies? Share your thoughts about it in the comments!