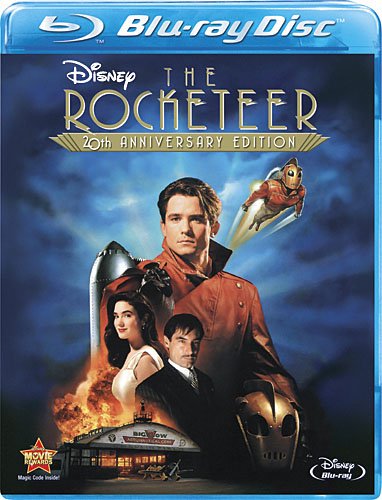 Think of it as a precursor to Soarin’ Over California. Now, at twenty years old, The Rocketeer: 20th Anniversary Edition Blu-ray

The Rocketeer debuted in theaters in 1991 (hence this being the film’s 20th anniversary), when I was the ripe old age of six. I remember being really excited about The Rocketeer at the time. In fact, I distinctly remember wearing an issue of Disney Adventures dog-eared as I read and re-read the feature about this exciting new film. The Rocketeer character was sleek and seemed like a really cool super-hero. Now, he was no Michael Keaton as Batman, but as far as early 90s heroes went, he was near the top of the list for me. What does this personal anecdote have to do with The Rocketeer on Blu-ray? Nothing, although if I were paid by the word for the content on this blog, it would make nice filler. In a round-about way, this story is meant to demonstrate that quite often, as kids we like media for the wrong reasons. A lot of times, as we get older, we are perplexed as to why we ever liked the media in question as children. Other times, such as with Calvin & Hobbes, we begin to appreciate the media on an entirely different level.

The Rocketeer definitely falls into the latter category of media. Never before popping in our review copy did I realize The Rocketeer was a period-piece set in the 1930s, never did I appreciate the wonderful score or cinematography, and quite honestly I don’t think I even grasped the basic plot of the film. To be fair, I was six years old the last time I saw the film. To say I was thoroughly impressed by The Rocketeer upon viewing it again after all these years would be an understatement. The film was excellent, and given the quality of unique plot, the characters, score, and cinematography, it’s easy to see why it has such a cult following.

This same cult following, or rather, the lack of mainstream success, probably explains why The Rocketeer hasn’t been released on Blu-ray prior to now. If you’re one of those The Rocketeer devotees, you probably don’t need an overview of the movie itself (heck, you probably don’t even need the Blu-ray review–you’ll be buying it regardless!), but for everyone else, here’s the CliffNotes version of the film. The Rocketeer is a Joe Johnston (known most recently for Captain America) film based on the graphic novel by Dave Stevens.

As noted above, its a period-piece set in 1938 Los Angeles. The film begins with “Cliff” (Billy Campbell) preparing his plane, the Bee Gee for an upcoming air show, which somehow has the unfortunate conclusion of the plane crashing after being caught in the midst of a machine gun-fueled car chase. To be sure, I never said the story was “firmly grounded in reality” above. Cliff’s plane is out of service, but the audience’s concerns are quickly allayed, as Cliff “borrows” a top secret jet pack. From there, Cliff uses the jet pack to take on the persona of the Rocketeer, complete with awesome golden helmet. Cliff becomes somewhat of a super-hero along the way, as the story masterfully combines action, romance, and drama set in a historical(ly inaccurate, at least to the extent of the rocket pack; otherwise it’s fairly accurate, right down to the California-Crazy Bull Dog Cafe) World War II era Hughes film. About the only negative thing I have to say about the movie itself is that the green screen scenes are now somewhat laughable (although they were probably good for their time).

The digital restoration (showed off earlier this year at a The Rocketeer D23 event) is impressive. The blacks and contrast are solid, and the colors are accurate overall. There is some slight noise at times, but this was likely present in the original print of the film. The stunt scenes look especially great in high-definition, and the wonderful edge detail in all those green screen shots makes the 90s special effects really stick out. Some scenes are slightly soft and/or washed out, but these are definitely the exception rather than the rule. In film terms, twenty years isn’t all that old, but for a twenty year film, this does look wonderful. Especially given that Disney doesn’t seem to care too much about the film given the barebones 1-disc nature of the release.

The audio here is presented in its original DTS-HD 5.1 Master Audio and it sounds spectacular! The original score composed by James Horner sounds beautiful, and utilizes mostly the front left and right channels with some organic uses of the rear surround and subwoofer (LFE). However, the audio really flexes its muscle with the flight scenes, when the planes swoop and dive dynamically from speaker to speaker. Overall, the audio is crisp and perfectly balanced. There’s plenty of action to give your audio system a workout, and supplementary channels are more restrained during more dramatic and dialogue-laden sequences. Again, given the barebones nature of the release, I was surprised that the audio was this solid. Maybe Disney is thinking of doing a Superbit redux?

Nothing. Not a single thing. This is simultaneously aggravating and dumbfounding. Aggravating because this is an “Anniversary Edition” that should instead be called the “Barebones Edition.” It’s as if Disney is practically shouting, “WE WILL DOUBLE DIP THIS RELEASE AT SOME POINT!!!” right on the back cover of the Blu-ray. Yet, it’s dumbfounding because it’s clear this isn’t a major release for Disney, and Disney obviously went to some lengths to restore the audio and video for this edition, so it would seem that this is the film’s one chance at a high quality Blu-ray release. Maybe the budget simply wasn’t there to do more with a release anticipated to be fairly small? I’m not quite sure. If I had to choose an excellent restoration/transfer or some bonus features I’ll only watch once, I’d choose the transfer any day of the week, so I suppose to that extent I’m happy with the Blu-ray, but I feel I shouldn’t have to choose. It would be nice to have both.

When considering only the audio, video, and movie itself, Disney has done right by fans with this release. However, the failure to include extras (that we know exist!) is incredibly disappointing. Because I don’t think this film is a good candidate for double-dipping, I will recommend it anyway, with some hesitation, and give it a resounding recommendation to those who are already The Rocketeer fans.

If you’re planning on buying the Rocketeer, please use the Amazon.com link below. Using the Amazon links here help support DisneyTouristBlog.com, and allow us to continue providing you mediocre (errr…”great”) content.