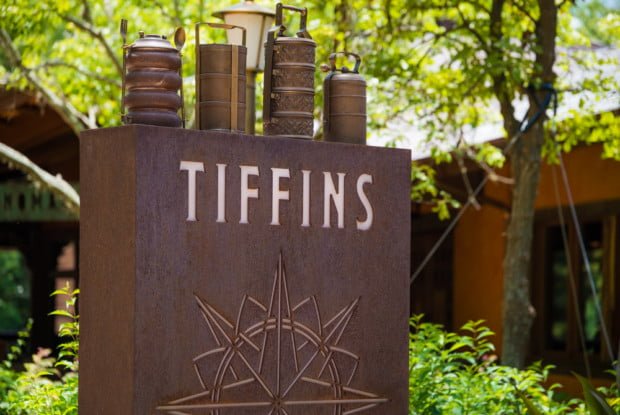 Tiffins is a table service restaurant at Animal Kingdom in Walt Disney World, located near Pandora – World of Avatar. This dining review includes food photos, thoughts on our experience, whether this new Signature Restaurant is worth it, and how it compares to other meals at WDW.

The design/decor of Tiffins is basically a tribute to the explorations of Imagineers. Disney’s site says as much, and our server at Tiffins further elaborated on this, even mentioning Joe Rohde by name. I found this to be interesting; Disney fans have long held a certain reverence for Imagineers, and the Imagineering: Behind the Magic books are incredibly popular, but it still surprises me that this is the explicit “story” of the restaurant given that Disney doesn’t really ‘lift the curtain’ on the parks to casual guests.

Dropping any pretenses of an elaborate backstory here was a good call. Tiffins simultaneously feels like dining in an art gallery, and eating at a high-end, low-key restaurant where globe-trotting Imagineers would themselves dine. 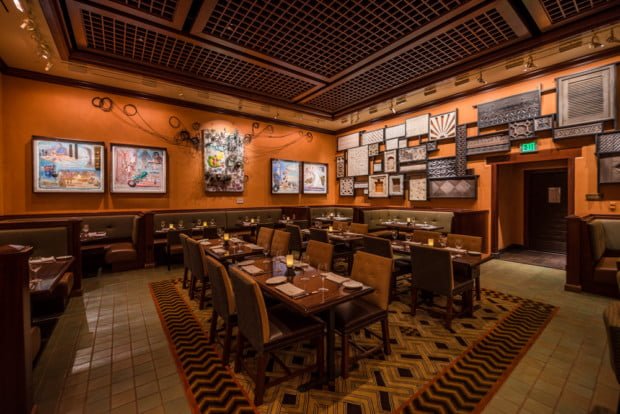 We hesitated before dining at Tiffins, concerned that it might not be true Signature Dining in the California Grill or Jiko sense of the term. We worried it might be an attempt on Disney’s part to push its menu prices even further. A legitimate concern, we felt, given the dramatic menu price increases we’ve witnessed recently at both Walt Disney World and Disneyland.

We enjoy reporting on new experiences for you all, but we don’t love you so much that we’re willing to be ripped off for you…sorry? 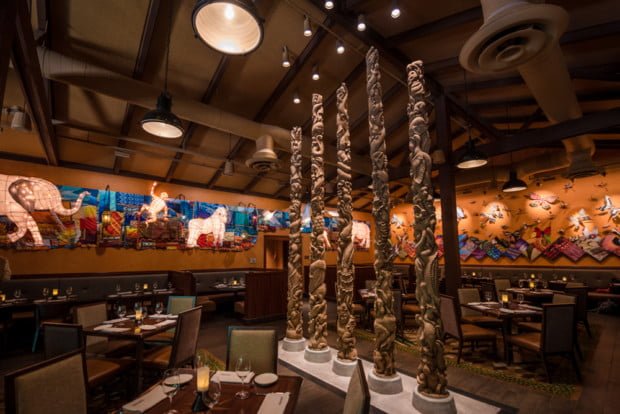 In any case, a couple of weeks before our trip, Disney added the new “Taste of Tiffins” section to its lunch menu, which is basically a ‘pick 2’ option at a much more palatable price.

I don’t think I’ve ever seen Disney lower menu prices, so my assumption is that introducing new options at lower prices is effectively Disney’s way of lowering prices without actually lowering prices. That solidified our decision to dine at Tiffins…hence this review. 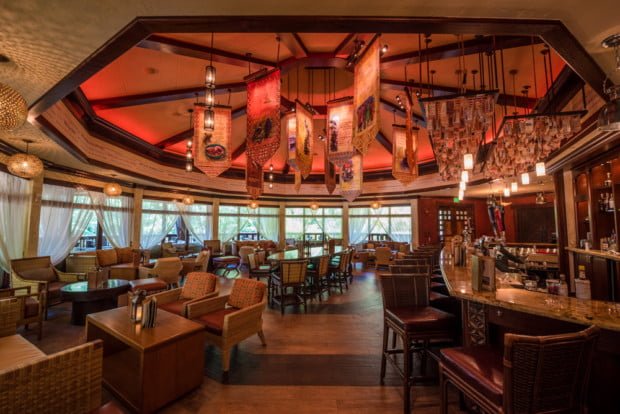 As you can see, Tiffins and Nomad Lounge (connected to Tiffins, and pictured directly above) were quite crowded during our meal. Having heard that Tiffins wasn’t too popular, we decided to skip ADRs, and were seated immediately when we walked up just after noon.

At the start of our meal, there were 3 other parties in Tiffins and 0 in Nomad Lounge. We enjoyed a leisurely meal, by the end of which time there were a handful of parties in Nomad Lounge and maybe 10ish in Tiffins. (Enough to justify opening additional dining rooms, but not so many that any tables adjacent to us were occupied.) 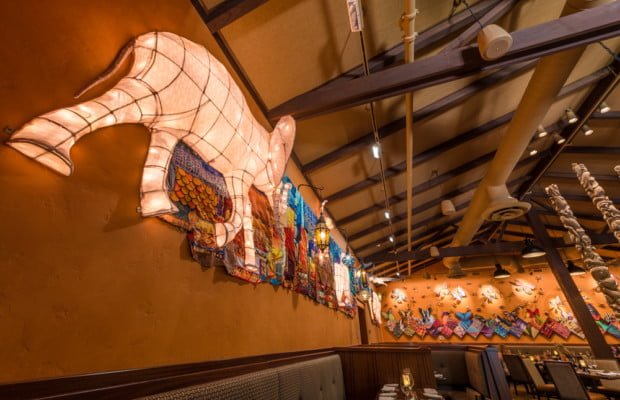 We were seated in the Grand Gallery, which is where all the light-up animals live. I don’t care who you are, there’s something truly magical about dining by elephant footlight. (I predict a day when the Elephant Booth will displace Cinderella Castle as the go-to spot for engagement proposals on Walt Disney World. You heard it here first, folks.) 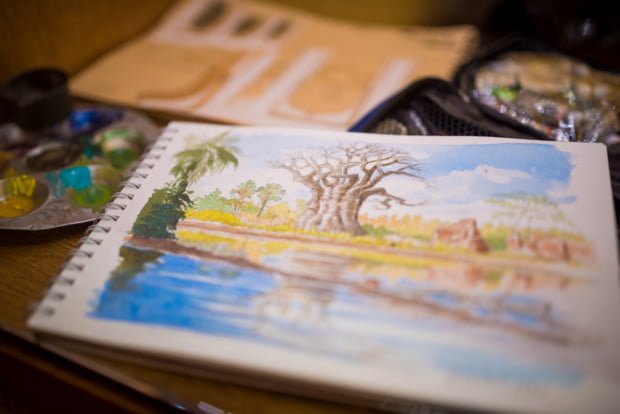 In addition to the art adorning the walls, there are a few display cases with other pieces and what appear to be sketches from the field made during the Imagineers’ travels. The designers of Tiffins exercised a good amount of restraint in not cramming as much in here as possible. It definitely skews more towards art gallery than the cluttered den of an eccentric scholar who saves and exhibits every random artifact they own.

I got a bit carried away taking photos in Tiffins, but I think you probably get the idea of the ambiance by now. I’ve simultaneously uploaded an album of Tiffins photos to Facebook with shots that didn’t make the cut for this review, if you want to see more. 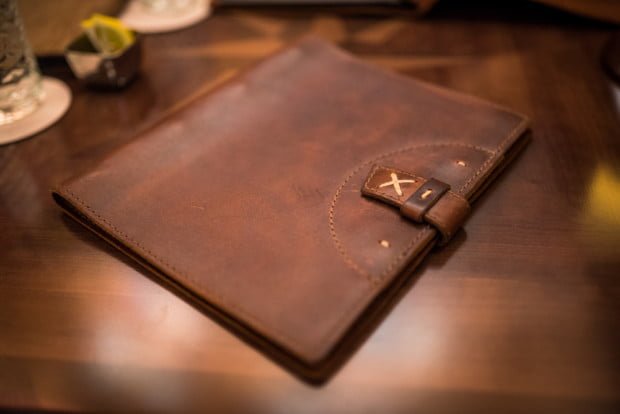 From thick cloth napkins to the distinct aroma of the leather-bound travel journals (doubling as menus) there are a lot of details in the Tiffins dining experience that we appreciated–and that elevate it to its very justified status as a Signature Restaurant at Walt Disney World.

As hinted at above, we each ordered from the Taste of Tiffins menu; this is the best lunch value by a fairly significant margin. 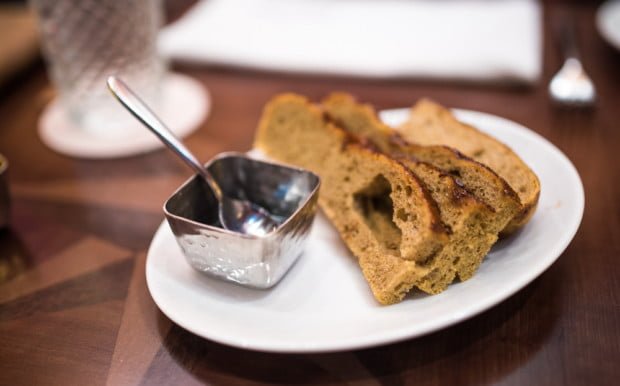 With molasses, salt, and vinegar, the complimentary bread service has a sweet & sour thing going on that works decently.

Sarah was more impressed with this than I was; for me, the contrasts here felt a tad stark. 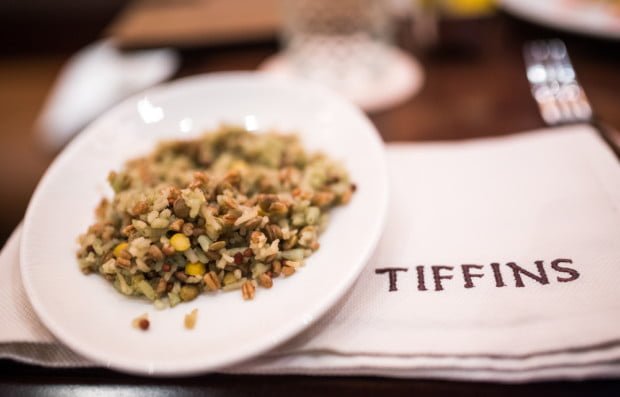 The Taste of Tiffins menu items are served with a plate of Jade Rice, which is nice to the extent that it provides added substance to what could otherwise be a light meal. Calling it filler is selling the rice short as it’s a nice blend; still, I can’t recall the last time I wanted to revisit any restaurant because I was craving their dope rice blend.

Before we start with our 4 entree selections, I want to emphasize just how delicious our meal at Tiffins was. Usually, Walt Disney World restaurants are graded (by me at least) on a bit of a curve, relative to other theme park restaurants. Not the case here: Tiffins could compete head-to-head against real world fine dining. My biggest concern at this point is that Disney will tinker with the exceptional menu because of how few guests Tiffins is drawing at this point. 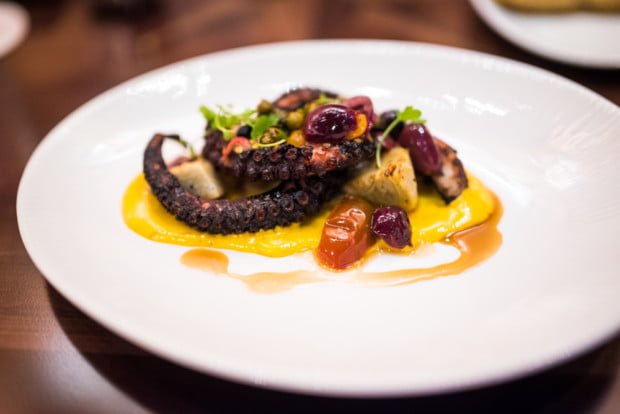 I chose the Marinated Grilled Octopus, with artichoke bargoule, saffron aÃ¯oli, and lemon-caper olive oil. Grilling the octopus was an interesting choice here, as it eliminated the normal texture that makes octopus off-putting for some people, and instead gave it a nice char and hint of a smokey flavor. The aioli was the perfect creamy accompaniment that provided a fairly mild tang to the dish.

There were a couple of bites where the char was too thick and overwhelmed the delicious and tender octopus, but that’s completely forgivable. When this dish was on, it was really on, hitting the high notes and ranking as my favorite part of the meal. The complexity and varied flavors that all worked together in concert really impressed me. The next time someone complains to me about theme park food being nothing but mass-produced burgers and hot dogs, I’m showing them a photo of this octopus. BOOM. 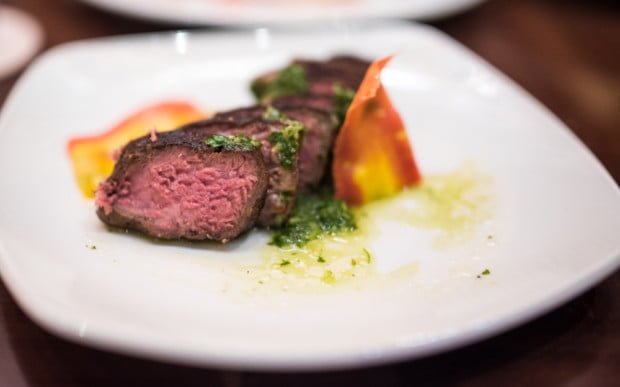 The 72-Hour Beef Sort Rib was a much more straight-forward dish, with the highlight here being the tenderness resulting from the 72-hour slow cook. This meat was juicy and melt-in-your-mouth delicious. As cliche as that sounds, it’s completely apt here. There was a light spread of Chimichurri, which enhanced the flavor slightly, but I was more than happy to let this meat speak for itself.

We were both really pleased with the portion size of the beef short rib. The meat quality was such here that a single entree of this might’ve been only slightly larger than our “tasting” size portion at some restaurants. Considering this was ~$14, we felt it to be an incredible value (even by real world standards). 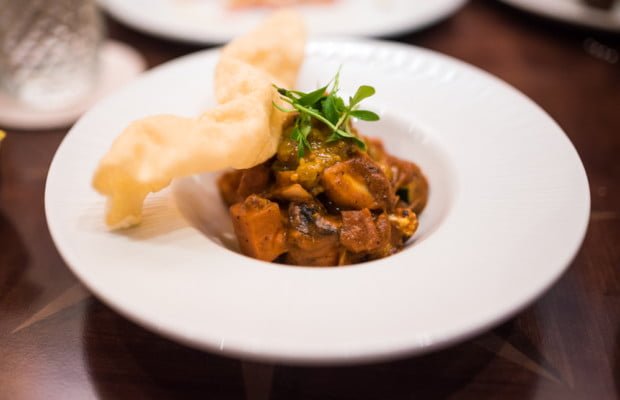 Another of our choices was the Market Vegetable Curry. Another really complex dish, with the initial taste being a mild and creamy buttery followed by a variety of spices that lingered on the tongue afterwards. This dish was mostly flavored by the curry, with the vegetables providing texture and substance–which is by no means a complaint. My recollection of how the vegetables tasted at this point is minimal, but the dish was fantastic. 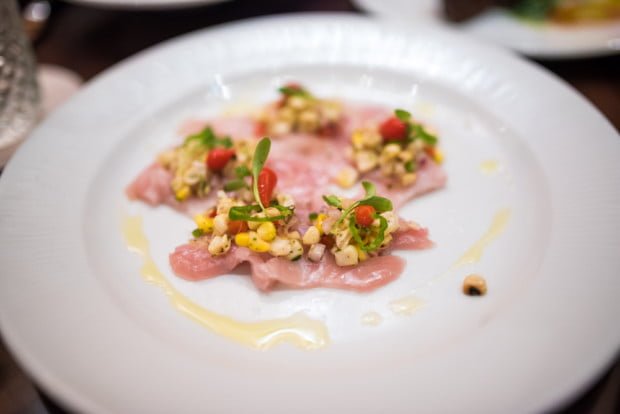 I made the mistake of going from the curry immediately to the Sustainable Seasonal Fish Crudo, which made the latter taste bland by comparison. I mention this because Sarah tried this first, and her opinion was dramatically more favorable than mine. After a waiting a bit for my palate to ‘reset’, I tried it again and was significantly more impressed.

I don’t think this is quite sashimi level fish, which is probably why there are the accompaniments to enhance the dish, but as a whole the crudo comes together nicely, with a refreshing and light taste. (This was my least favorite entree we ordered, and I’d still order it again, which should speak volumes about the menu at Tiffins.) 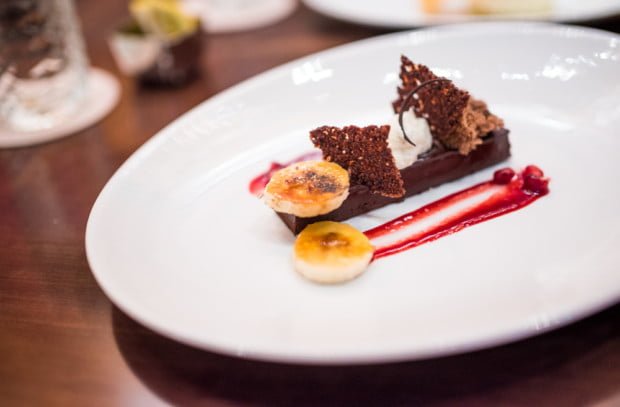 After such amazing entrees, dessert was a letdown. The South American Chocolate Ganache was incredibly rich and dense, which I suppose is something if you’re going for richness and denseness, but it didn’t particularly wow either of us. 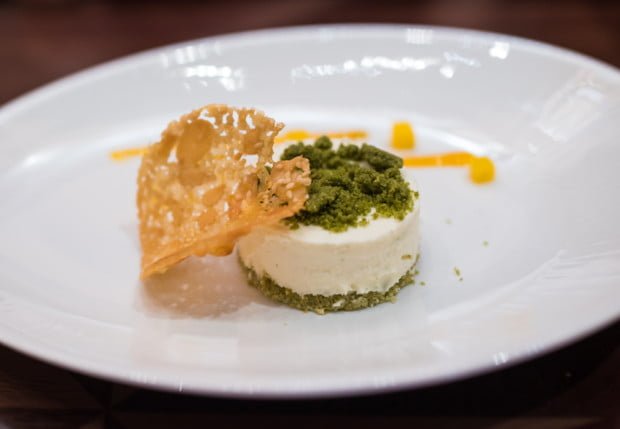 I found the Lime Cheesecake to be more impressive. I’d describe this as the love-child of cheesecake and key lime pie; it has the lightness (and lime-ness) of key lime pie, while still retaining the fundamental flavors of cheesecake.

After the entrees blew us away in pretty much every regard, perhaps the Lime Cheesecake suffered from our inflated expectations. By the standards of most other restaurants at Walt Disney World, this dessert would be an all-star. 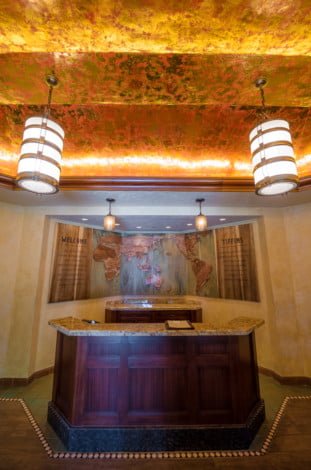 Overall, Tiffins is a must-do restaurant at Walt Disney World that is the type of high-level experience from start to finish that drew us into Disney dining years ago. In terms of cuisine, it’s the best Disney in-park restaurant in the world, and even surpasses some of the resort Signatures. I know what you’re thinking, and, yes, it is superior to Tony’s Town Square! (Also: Carthay Circle Restaurant, Hollywood Brown Derby, and Magellan’s.)

Tiffins’ style is likewise strong, albeit not at the same level as some of Disney’s elite themed restaurants. We would recommend getting your feet wet with a mid-afternoon lunch here, trying the Taste of Tiffins menu. Even prior to dessert, we each had a filling meal, and considering the quality of the cuisine, ambiance of the restaurant, and little details in the experience, we felt it was money well spent. We will also be back to try the full dinner menu because our experience here was that good.

What do you think of Tiffins? If you’ve dined here already, do you have any particular thoughts on what you tried? Does the menu look appealing to you? Do you agree or disagree with our review of Tiffins? Any questions? Hearing your feedback–even when you disagree with us–is both interesting to us and helpful to other readers, so please share your thoughts below in the comments!