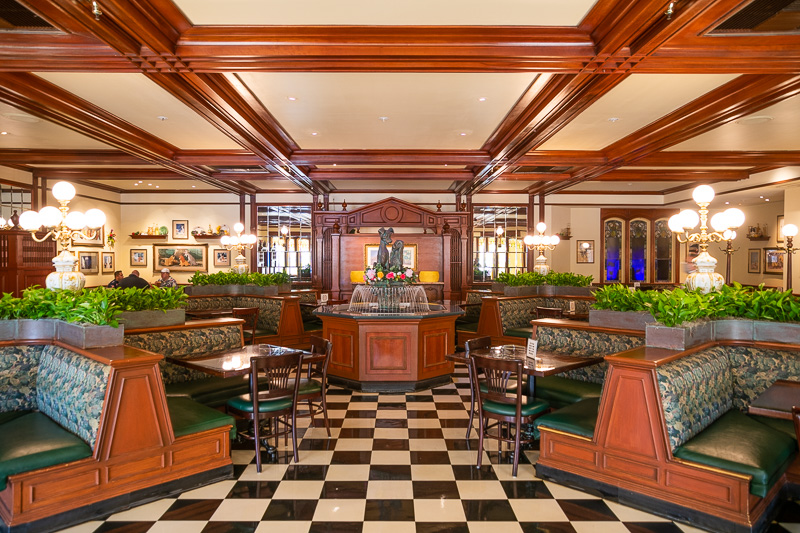 With the reopening of Walt Disney World, Tony’s Town Square Restaurant is the only table service dining option at Magic Kingdom that offers outdoor seating. In this tale of redemption, we’ll review our recent experience eating outside at Tony’s on a hot and humid day, share food photos, views of entertainment, and more.

As with literally anything at Walt Disney World, Tony’s Town Square Restaurant also has its share of fans. (So do Stitch’s Great Escape and Dino-Rama.) It serves Americanized Italian comfort food dishes that are approachable, and it’s a very family-friendly restaurant, so that’s understandable. With that said, we’ve also been hearing that the quality at Tony’s Town Square Restaurant had been improving, so thought we’d give it another chance at redemption…

Before we get to that, let’s take a look around Tony’s Town Square Restaurant, which is a hometown Italian eatery with decor inspired by Lady and the Tramp.

In the past, we’ve felt the interior was charming and offered a fun setting that evoked the spirit of Lady and the Tramp while also fitting on Main Street. Basically, a nice blend of theme and character infusion. 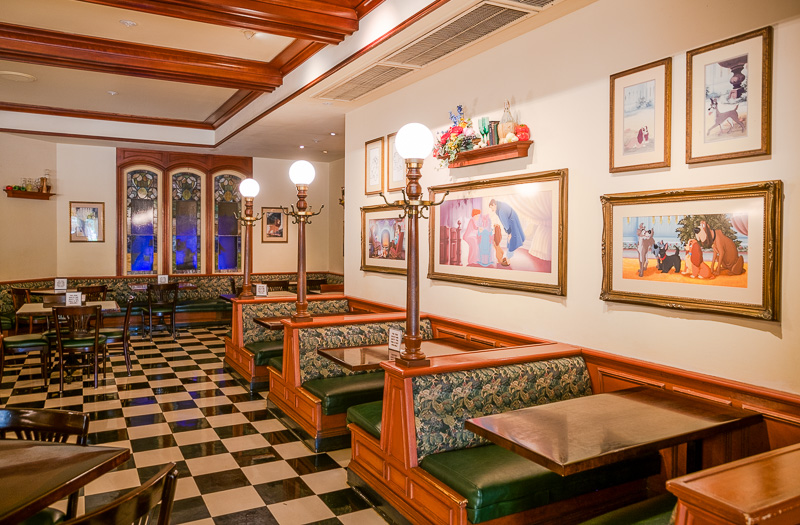 As you can see, Tony’s Town Square Restaurant is relatively low-key. Lots of Lady and the Tramp paintings, stained glass details, and the feature fountain in the middle of the restaurant.

Walt Disney World’s official site describes Tony’s Town Square Restaurant as being a “charming turn-of-the-century trattoria on Main Street, U.S.A., with its whitewashed balustrades, French doors and expansive front porch, which offers fantastic views for people-watching.” All of that is accurate, but probably oversells the restaurant. 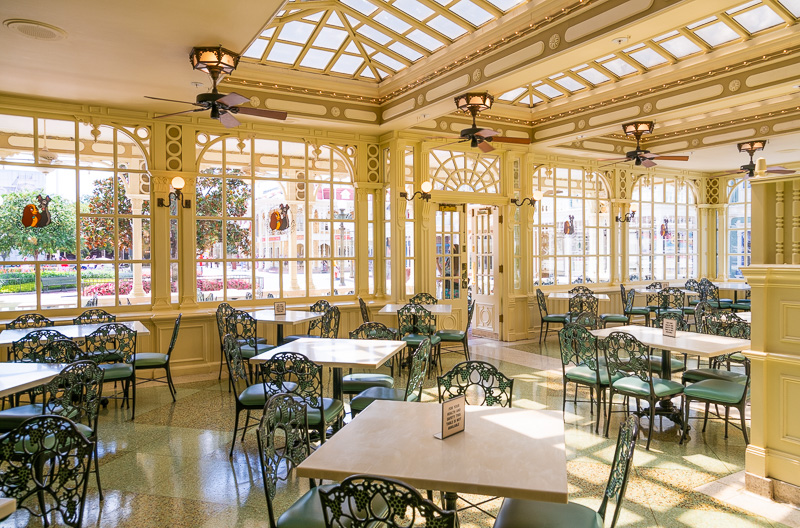 That page also indicates it’s a venue for “hopeless romantics,” which is much more of a stretch. To the contrary, our biggest complaint in the past has been that Tony’s Town Square Restaurant is incredibly loud. This is due to a mix of its design, which does a poor job of muffling sound, and its family-centric nature. 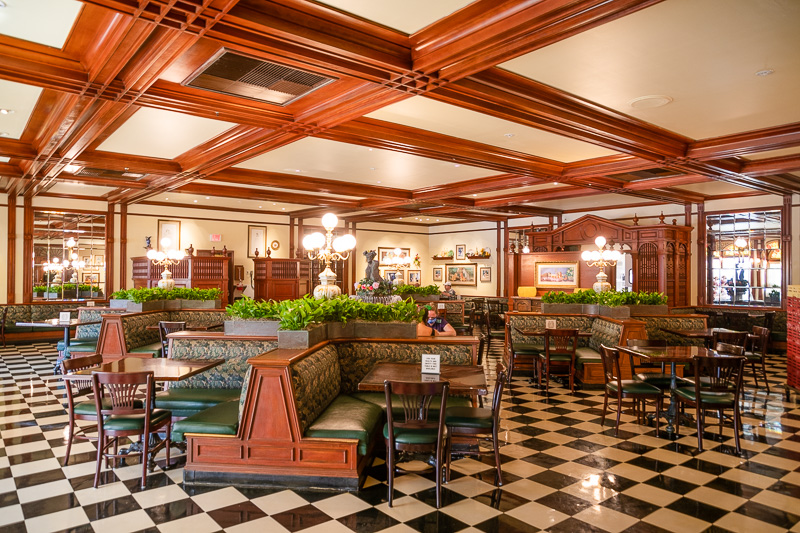 However, with only one other party in the restaurant when we arrived and only 3 parties when we finished our meal, Tony’s was downright charming and quaint for the duration of our meal.

Even as business at Walt Disney World picks up, expect this improved atmosphere going forward as over half of the tables in Tony’s Town Square Restaurant are out of commission due to physical distancing requirements. Basically, it’s the perfect time to dine at Tony’s if you want to savor the ambiance. 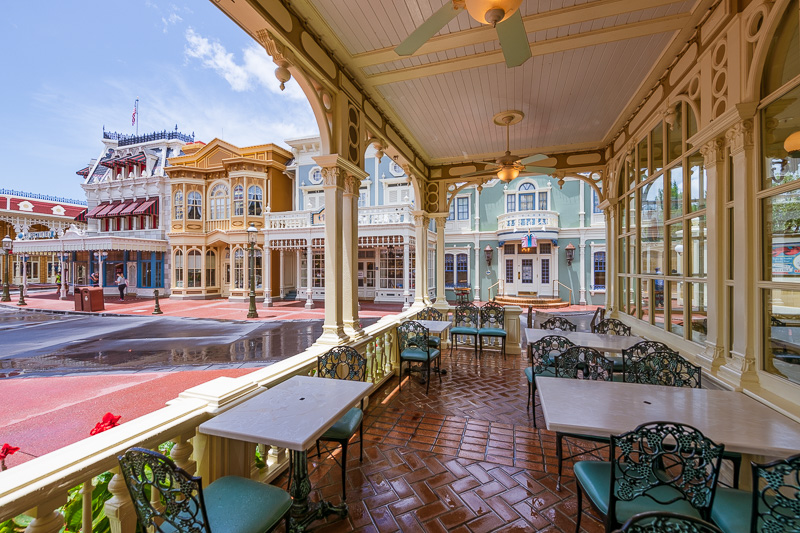 Next, the outdoor seating. This is the main thing that drew us to Tony’s Town Square Restaurant. Despite the seating areas being veritable ghost towns, we were told at check-in that we couldn’t be guaranteed a seat outdoors. Probably just something ingrained that Cast Members say no matter what, but worth keeping in mind if you’re considering dining here.

As we’ve mentioned in numerous posts, we are only dining outdoors for the foreseeable future while visiting Walt Disney World. Sorry if you’ve already read this, but we’re going to continually reiterate the point. 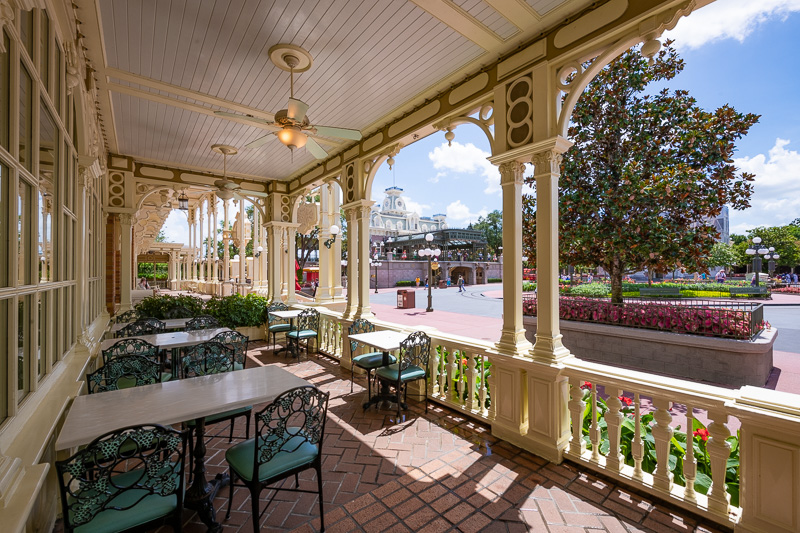 The current consensus among respected epidemiologists is that transmission via fomites (touching objects, then touching eyes, nose, mouth) is minor, unlikely, and exaggerated. By contrast, there’s growing consensus that aerosol transmission is much more likely, especially via enclosed indoor settings or with prolonged personal contact.

Suffice to say, if you’re compulsively cleaning surfaces and sanitizing your hands but are still dining indoors, you’re prioritizing the wrong thing. (It’s best to err on the side of caution, eating outside and sanitizing.) 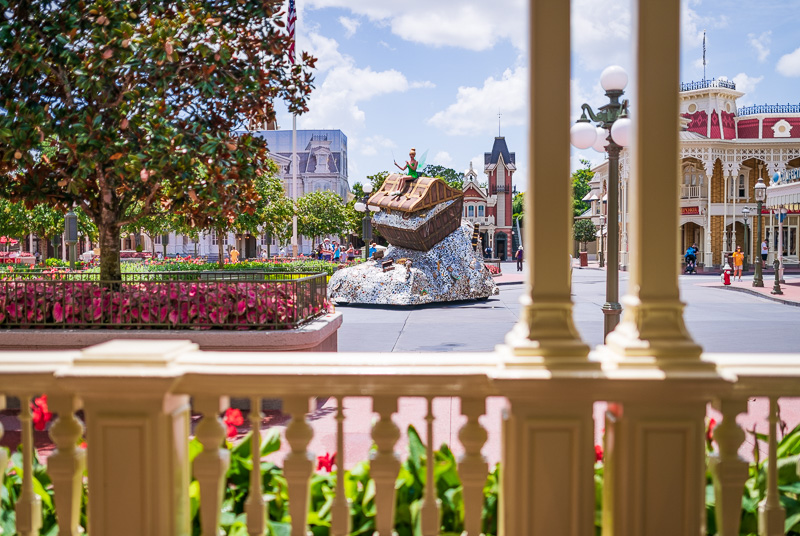 With this particular meal, given the lack of other people in the restaurant, dining inside would’ve been lower risk.

However, we didn’t know that when making the table request and dining outdoors gave us the opportunity to see the smile & wave Main Street Town Square show (two photos above) and two character cavalcades. 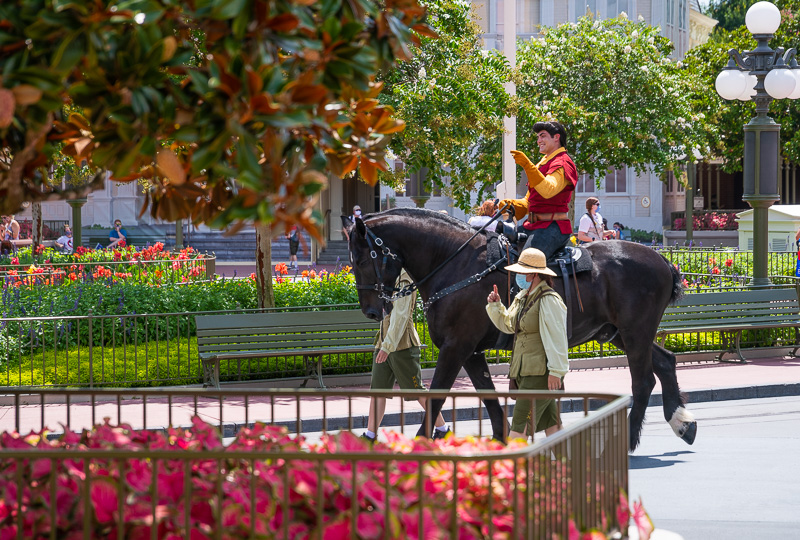 The steady stream of entertainment gave an energy to the area, and it was actually really pleasant on the outdoor terrace, even on a 94Âº summer day (with a “feels like” reading of over 100Âº).

In any case, we’d strongly recommend restaurants with open air seating if you want to mitigate some risk while visiting the parks. See our Best Outdoor Dining Options at Walt Disney World for recommendations on that front. 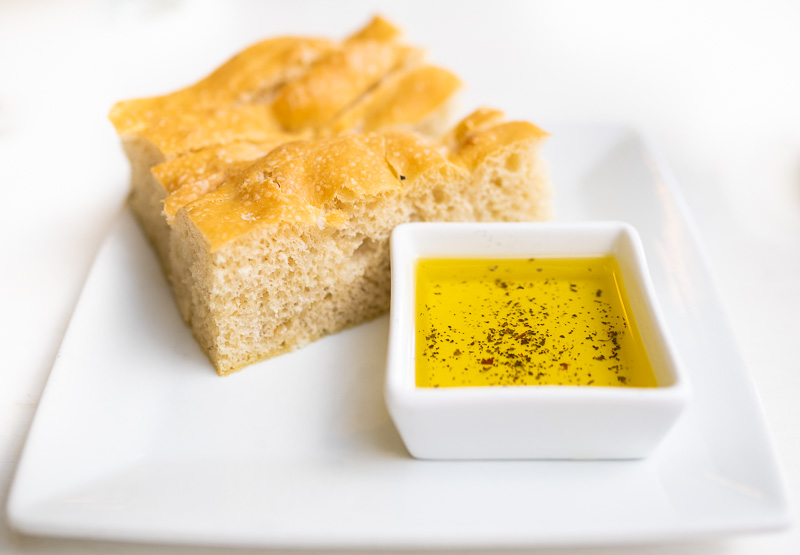 Moving along to the food, every meal at Tony’s Town Square Restaurant begins with bread and olive oil.

This bread service has frequently been regarded as the best thing Tony’s serves, and that’s not necessarily a knock. It’s always fresh and delicious, toeing the line between slightly airy and doughy, with a sea salt crust. The oil is likewise good. 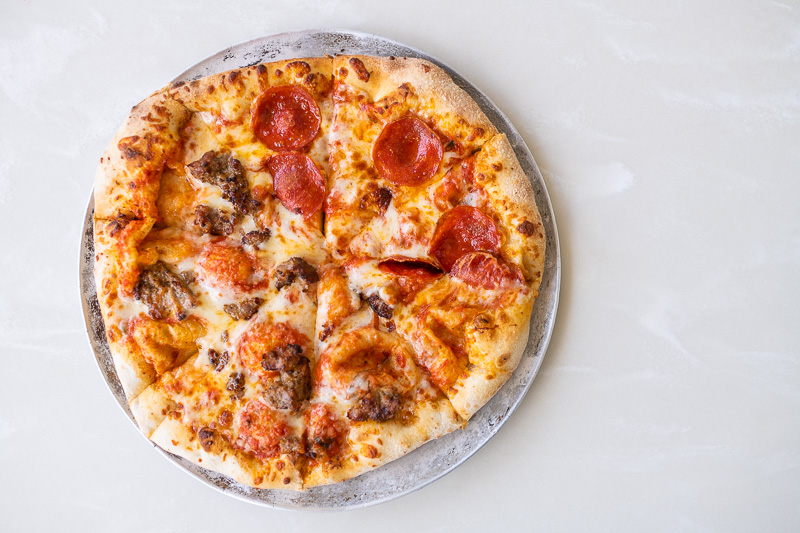 For my entree, I ordered the Tony’s Pizza Pie: Hand-tossed Pizza Dough, Blend of Cheeses, and Tony’s Pizza Sauce with Pepperoni, Sausage, or Garden Vegetables.

I did half pepperoni, half sausage for a “battle of the meats.” 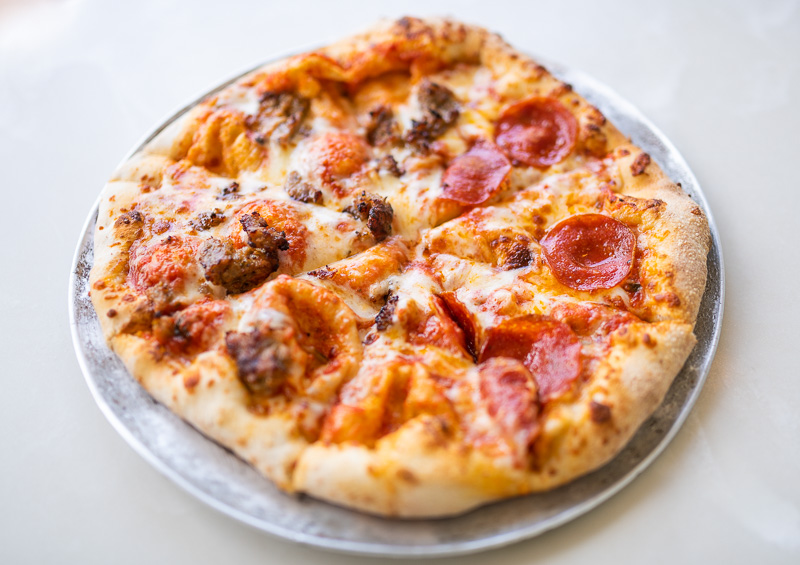 Guests from Chicago, New York, or other pizza snobs will likely find something to be desired about this. Personally, I find debates about the “true” type of pizza exhausting, and a misplaced form of regional pride. Pizza is indulgent comfort food, and there’s pretty much only good, more good, and great pizza. There’s no such thing as bad pizza, in my view.

Tony’s Pizza Pie falls squarely into the more good pizza category. It’s clearly handmade, and while the ingredients are only of moderate quality, it’s still pretty solid. On the spectrum of Walt Disney World pizza, it’s closer to Via Napoli (but still far below it) than it is PizzeRizzo or Pinocchio Village Haus. I’d recommend the sausage version of this pizza. 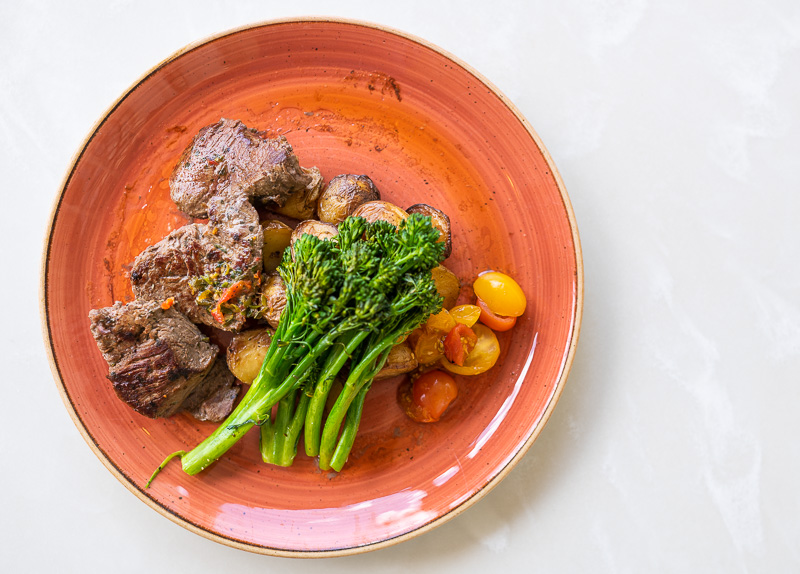 This was even better, albeit more expensive. The steak medallions were nicely seasoned, flavorful, and perfectly-prepared. The meat was delicious although not quite as tender as we would’ve liked. The sauce added a richness and indulgence to the dish, which was offset nicely by the vegetables. I probably would’ve preferred a bit more indulgence with creamy mashed potatoes, but still no complaints. 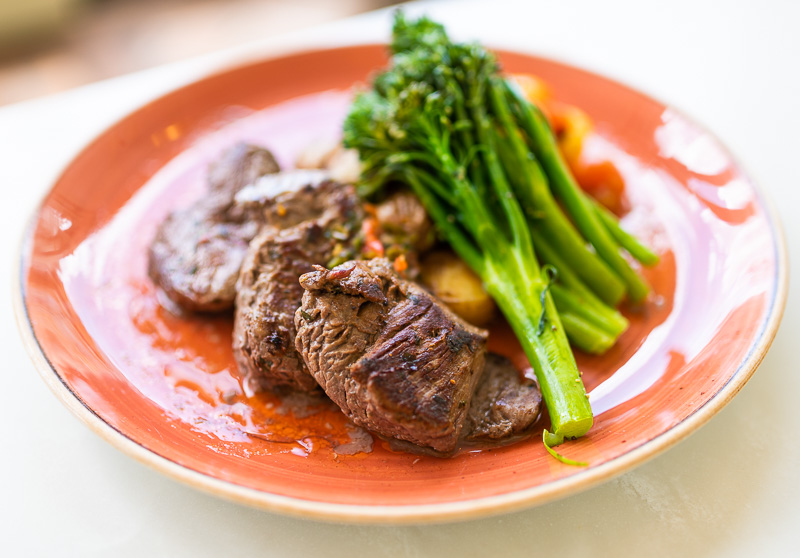 All things considered, the quality here was commensurate with just about any of the New York Strip Steak entrees that are ubiquitous on Walt Disney World menus. While the cut is different, the idea and quality are about the same. It’s obviously not Signature Restaurant caliber (nor is it that price), but it’s about equal to what you’d order at Coral Reef, Kona Cafe, the Wave, Grand Floridian Cafe, etc.

Ultimately, this tale of “redemption” for Tony’s Town Square Restaurant might sound fairly tepid, but keep in mind where it stood with us previously. While it was never our worst restaurant at Walt Disney World, it was in the bottom 10. This meal alone removes it from contention on that list. Tony’s Town Square Restaurant is still not among our favorites (even in Magic Kingdom, we prefer Skipper Canteen, Be Our Guest Restaurant, and Liberty Tree Tavern), but it’s no longer a dining spot we’d actively avoid.

Our opinion on both the food and atmosphere at Tony’s Town Square Restaurant has improved considerably. The cuisine is no longer on par with Trader Giotto’s microwavable meals–it’s more like a Disneyfied Olive Garden. Still not the highest praise, but better. Atmosphere-wise, Tony’s is downright lovely, which is arguably the bigger selling point of Walt Disney World restaurants, anyway. Finally, Tony’s Town Square Restaurant is also the only Magic Kingdom table service dining option with outdoor seating (and the counter service alternatives are bad), so we’ll probably be eating here a lot in the next year!

Have you dined at Tony’s Town Square Restaurant in the last year or two? What did you think of the meal? If you’ve dined there previously, do you think it has improved, or is it still among the worst restaurants at Walt Disney World? (Or, do you totally disagree, thinking Tony’s is, and has always been, great?) Any questions we can help you answer? Hearing your feedback–even when you disagree with us–is both interesting to us and helpful to other readers, so please share your thoughts below in the comments!