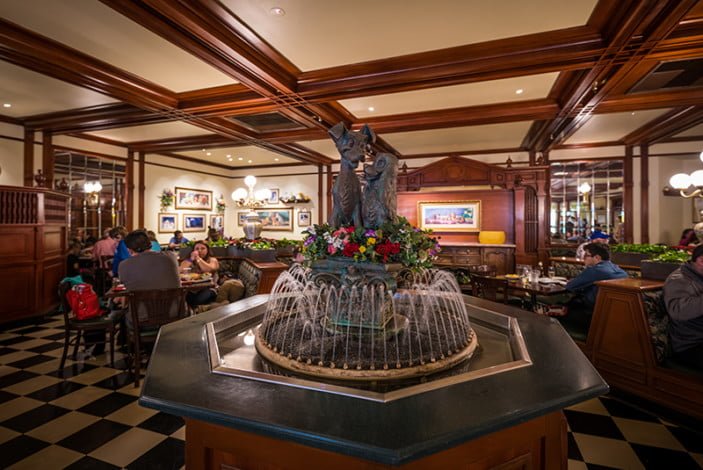 Tony’s Town Square is a table service restaurant in Walt Disney World’s Magic Kingdom serving Italian cuisine in a Lady and the Tramp-inspired setting. This review features photos of food, our thoughts on the ambiance, and whether it’s worth dining here.

In most Walt Disney World fan circles, Tony’s Town Square has a reputation that precedes it. In this regard, it’s a bit like Le Cellier, a restaurant that still is popular from goodwill built up over a decade ago. Except, in this case, it’s bad-will. Basically, Tony’s is the “Reverse Le Cellier.” Despite spending a ton of time in Magic Kingdom, we had avoided eating here for years, hearing almost unanimously bad things from people we trust…

Recently, we had started hearing from regular readers via the comments and a couple of Florida friends that Tony’s Town Square had gotten better. We were still pretty reticent about giving it a chance since the long-term consensus on Tony’s is basically a chorus of negative reviews.

Nevertheless, we decided to give it a chance one day while doing our “experiment” with the Deluxe Disney Dining Plan. At least this way, we figured, we weren’t directly paying out of pocket, so if the cuisine at Tony’s Town Square were still a culinary crime, it wouldn’t sting quite as much. 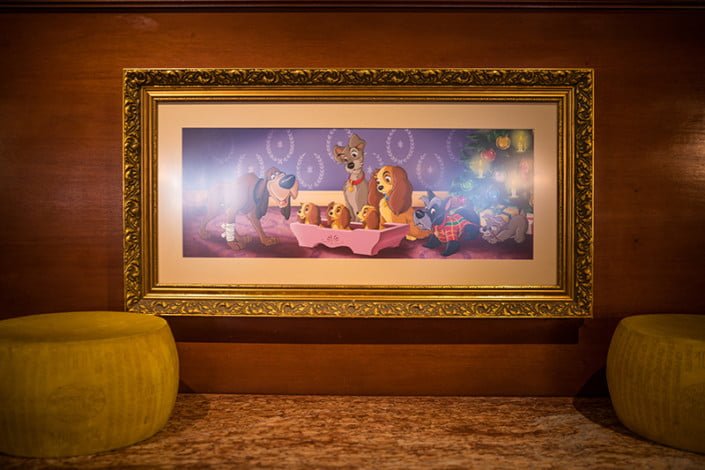 This is partially to be expected. Tony’s serves crowd-pleasing fare in Magic Kingdom, making it a strong draw for families. We did not expect an adult meal in a refined setting here, and to be upset about the loud atmosphere here would be ludicrous given the circumstances. It is, however, something to keep in mind if you’re new to Walt Disney World dining.

Thematically, Tony’s opts for an environment that’s decorated with paintings of the film’s characters rather than re-creating the iconic Tony’s Restaurant from Lady and the Tramp. While I’d prefer the latter approach, I understand why Disney went this route. 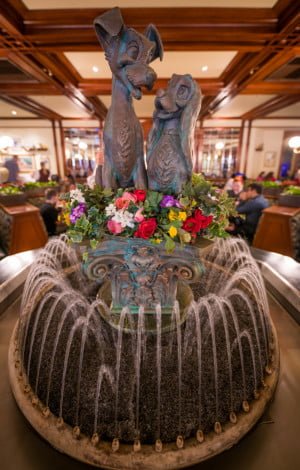 Evoking Lady and the Tramp without directly referencing the characters would not have been easy. Perhaps the Imagineers felt the more blatant approach was necessary since Lady and the Tramp is an older film, and most people wouldn’t pick up on the theme if it weren’t obvious.

Regardless, I think the interior dining room more or less works. It’s a fun setting that reminds patrons of the spirit of the film even if it’s not all that themed. Kids are sure to love it, and adults will too if they aren’t overly-critical bloggers. Even though it’s loud and chaotic, it attempts an intimate setting. 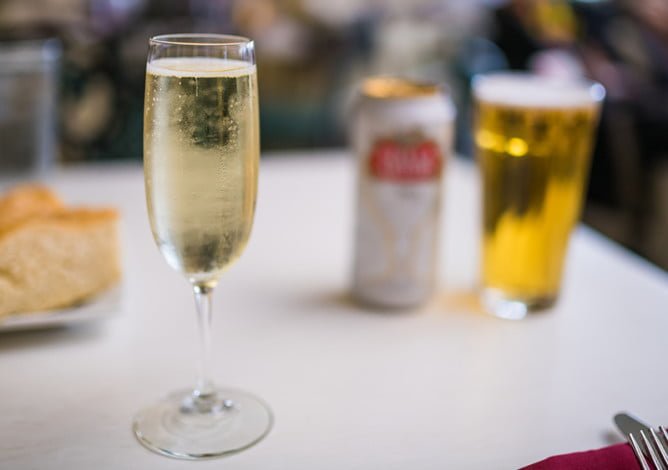 In terms of cuisine, Tony’s Town Square is one of the most brilliantly themed restaurants at Walt Disney World. Think about it: what other restaurant serves food the characters it’s based around would eat? If Lady and Tramp are anything like our dog, they eat just about anything–including objects that aren’t food. Tony’s Town Square is actually very fine dining…for dogs!

Relax Tony’s fans, I’m kidding. I know calling this ‘food for dogs’ is harsh, but I couldn’t resist making the joke. In actuality, Tony’s Town Square was not quite as atrocious as we feared. I can see how its crowd-pleasing style of Italian cuisine can be appealing on vacation.

The food at Tony’s is not even remotely ambitious, but it’s comfortable and the style is approachable. Even if the execution leaves a lot to be desired, Tony’s popularity is understandable. With that said, this is a definite one and done for us. 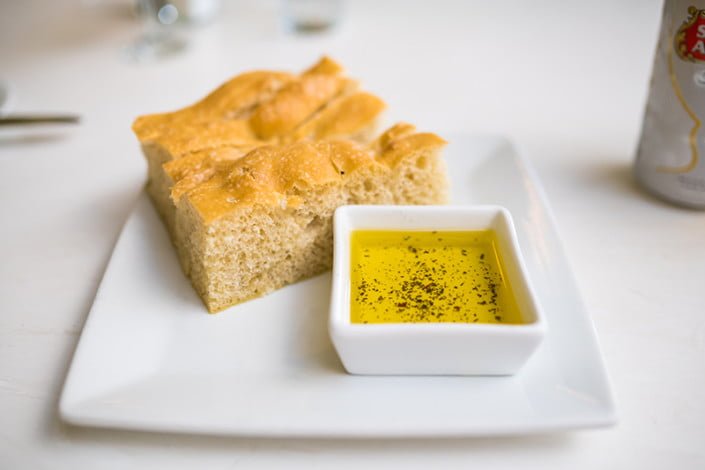 With one exception, our food was over-salted yet bland. It takes some doing to make such over-salted dishes this bland, so perhaps Tony’s deserves some praise there.

One of the best things we had was actually the bread service, which was nice buttery denseness to it. Here are photos and more specific thoughts on what we ate: 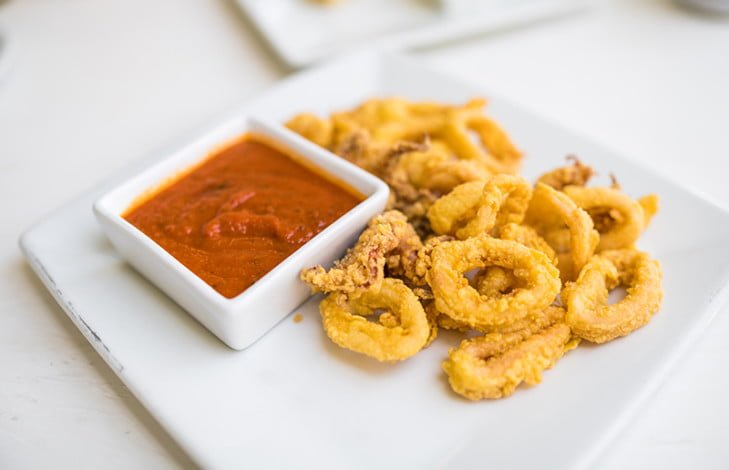 Here’s the Calamari with Marinara.

I’ve said countless times that I’m a sucker for calamari, and that’s true. I enjoyed this more than I should have, but I’ve made better frozen calamari at home. 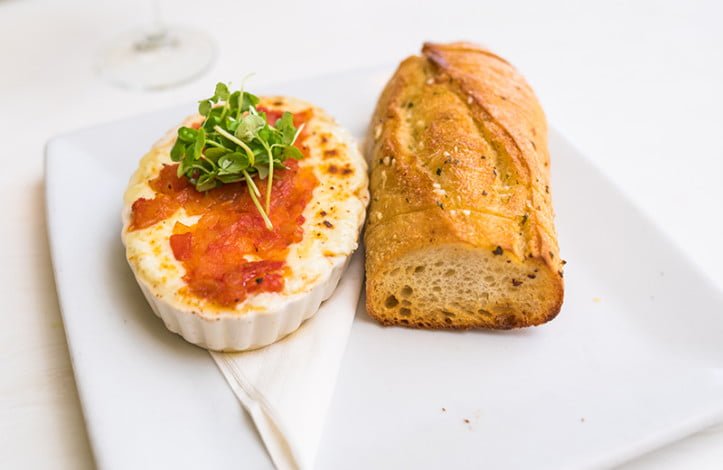 We appreciated the choice of ricotta here for what could otherwise be a really dense and unhealthy dish, but this was particularly bland. The tomato topping didn’t seem like jam so much as it did canned tomatoes. We didn’t finish it, instead opting for the complimentary bread service. 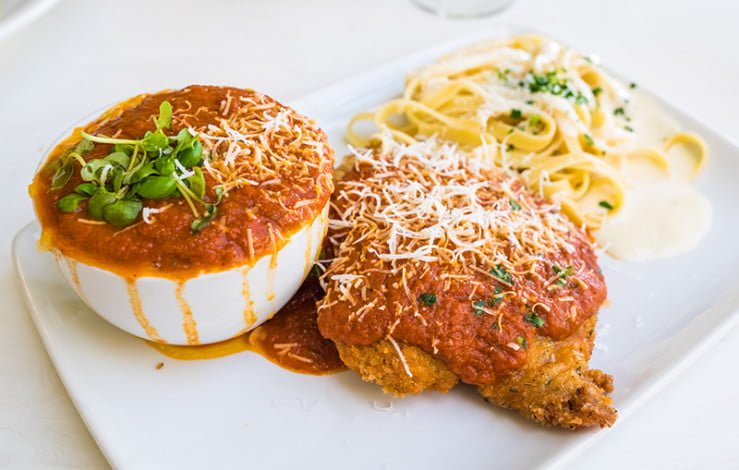 For my entree, I ordered the Italian Trio: Chicken Parmigiana, Baked Rigatoni, and Fettuccine Alfredo.

In recent memory, I don’t think I’ve had a worse entree at any Walt Disney World restaurant. The quality was low and the flavor was basically just salt and sauce. I can’t think of a single positive thing to say about this dish. Pick any random entree at Olive Garden–or even the freezer from Trader Joe’s–and it will be better.

I’m not normally one to ever count calories, but I stopped eating this about halfway through because I figured it just wasn’t “worth it.” 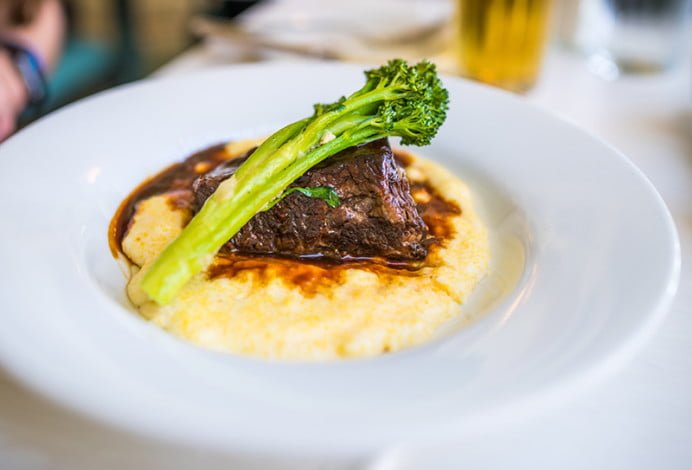 Sarah ordered the Braised Short Ribs with mascarpone polenta and broccolini for her entree.

Out of everything we had, this was the standout. The meat was tender, and the polenta was a nice accompaniment. The meat was a bit over-salted, but not terribly so. We think the dish is overpriced if you’re paying out of pocket, but if you’re doing Tony’s Town Square on the Disney Dining Plan, this would be our recommendation.

This was a pleasant surprise, and we’re not even grading on a curve when we make the recommendation to order the Braised Short Ribs. 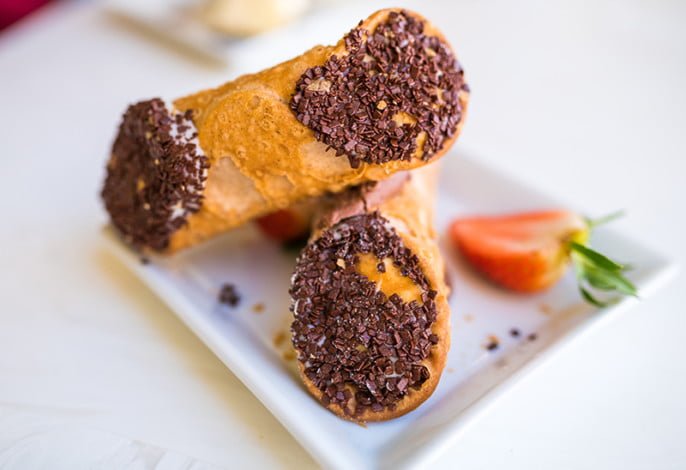 For dessert, we ordered the Cannoli, ricotta cream-filled shells dusted with powdered sugar.

This was fairly average. There definitely wasn’t any nuance and it didn’t taste freshly-prepared, but it wasn’t terrible, either. While I wouldn’t order it again, it’s a decent choice if nothing else on the dessert menu appeals to you. 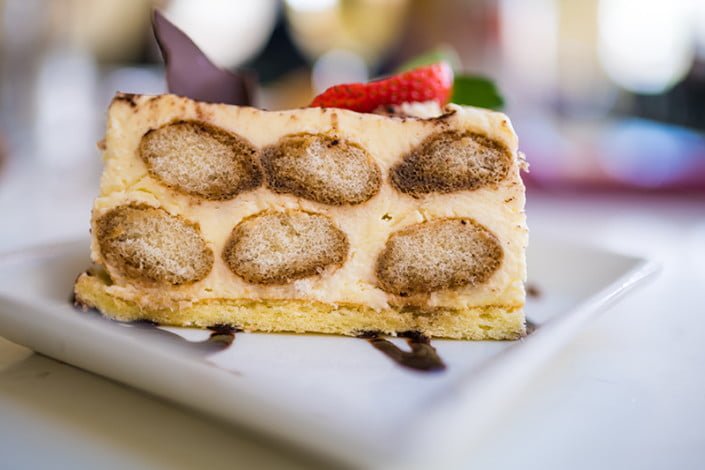 I actually liked this! It struck me as an ambitious twist on a classic Italian dessert, and one that had more subtlety, texture, and quality than anything else. If we somehow find ourselves at Tony’s in the future, I’d order this.

With all of that said, I’ll end this review on a positive note, with a couple of amusing vignettes that we observed during our meal. I’ve come up with an incredibly original name for these vignettes: Scenes from an Italian Restaurant.

Two women are seated on the terrace, each order two drinks (you could say it was a bottle of red, bottle of white…but actually, it was beer), slowly drink them over the course of about 30 minutes, and leave. A great hack for a busy day in an otherwise alcohol-free park. Pair this with a mid afternoon showing of Festival of Fantasy, and that’s about the ultimate Tony’s experience.

A small child jumps up from his seat, grabs a ball from his stroller, chucks it directly above him at the ceiling, it bounces back and hits the table, and he starts crying. This may not be all that funny to read, but I had to turn my head so the family didn’t see me laughing and I was almost in tears. It was inexplicably hilarious. This kid was expressing how we felt about dining at Tony’s.

Overall, Tony’s Town Square is not a restaurant we recommend. It was not as bad as we feared, but it was by no means good. If it has improved in the last couple of years (and I truly question whether that’s the case), I can only imagine how bad it must’ve been before. I don’t think it’s the absolute worst table service restaurant at Walt Disney World–but I would put it in the bottom 10. There are counter service restaurants in Magic Kingdom that are better than Tony’s, and I have a tough time envisioning any scenario that has us returning to give Tony’s a second chance.

What do you think of Tony’s Town Square? Agree or disagree with our review? Are we being too hard on Magic Kingdom’s Italian restaurant? Do you enjoy the comfort food here? Would you rather do dinner elsewhere in Magic Kingdom, or is this a good option? Any questions? Hearing feedback about your experiences is both interesting to us and helpful to other readers, so please share your thoughts below in the comments!