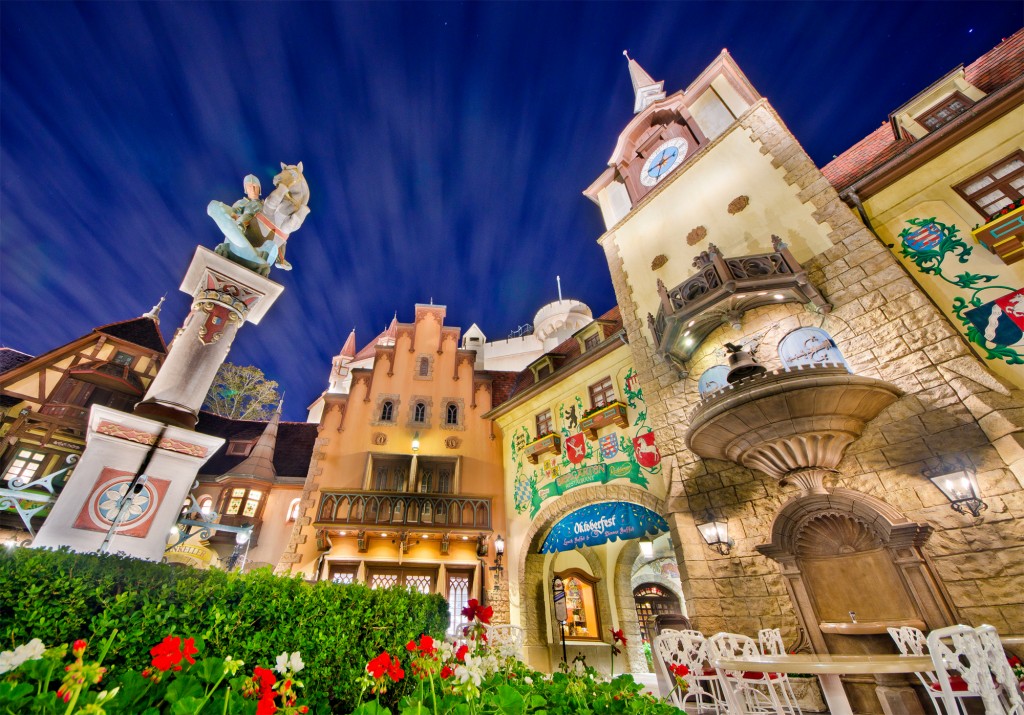 Germany is an Epcot World Showcase pavilion at Walt Disney World featuring Biergarten restaurant, gift shops, and more. In this post, we’ll share some tips and info about design, merchandise, and dining in the Germany pavilion.

Our intention here is to mostly focus on the Germany pavilion’s shopping and architecture. We’ve already reviewed Biergarten, and there are no attractions in Germany (although we’ll discuss the unbuilt Rhine River Cruise here!), so that’s primarily what’s left to cover.

We think shopping is one of the overlooked aspects of World Showcase, as many guests assume that if they don’t want to buy anything, the stores don’t hold a lot of appeal. This couldn’t be further from the truth in most pavilions, and we think its especially true in Germany, where there are tons of cool details and beautiful items for sale–calling them souvenirs doesn’t do them justice–that are worth seeing even if you have no intentions of purchasing anything…

Let’s get started with a look at the Germany pavilion’s architecture, the story behind its presence in World Showcase, and what could have been. 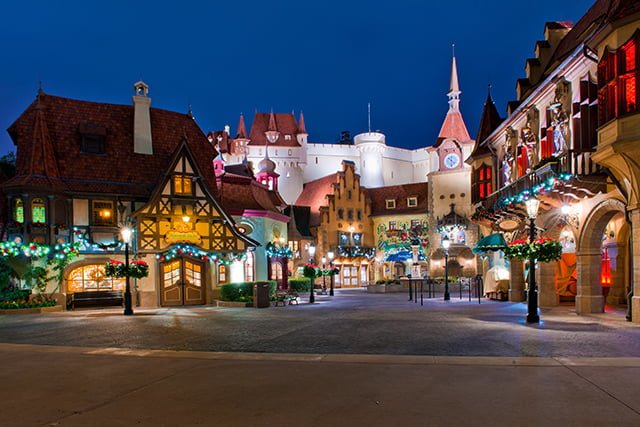 In terms of architecture, the Germany pavilion features inspiration from a number of real cities and monuments around the country, but leans most heavily on the Bavaria region. Within that, one city was especially significant for the Imagineers: Rothenburg ob der Tauber.

We visited Rothenburg ob der Tauber during a trip to Germany, and the similarities were uncanny in places. As I wrote in this blog post about Rothenburg ob der Tauber on TravelCaffeine, which I’d recommend you check out if you want to see my photos of the real Rothenburg, the charming village is like stepping into a fairytale. It’s a place from a bygone era that is truly enchanting. It’s easy to see why so much of the idealized Germany that Disney’s Imagineers created pulls heavily from the similarly romanticized Rothenburg.

In the center of the pavilion’s plaza is a fountain topped with a statue of Saint George. While the inspiration for this would appear to be Rothenburg (pictured below), we noticed plenty of fountains like this throughout Germany. It could just as easily be inspired by another location, or a combination of fountains meant to generically evoke Germany.

In other facades, it appears the Germany pavilion is influenced by buildings in Frankfurt and Freiburg. The latter definitely serves as inspiration for at least a couple of prominent structures in Epcot, the clocktower and ‘Das Kaufhaus.’ While the Epcot clocktower could be inspired by Rothenburg, it’s more likely based upon ones found in Freiburg.

With that said, the Germany pavilion largely feels like an amalgamation of real world locations. Much of it is similar enough to Rothenburg to feel eerily reminiscent of that, but different enough that it has its own distinct sense of place. I suspect that Imagineers paid a visit to Germany while doing field research for World Showcase, and similarly found Rothenburg mesmerizing. Where else they might’ve gone and other architecture that inspired the design of Epcot’s Germany is more of a mystery.

The large fortification resembles the main keep at Eltz Castle, a medieval castle along the Moselle River, but the similarities are more vague. Personally, I think it would’ve been cool for Imagineering to draw from Hohenschwangau Castle, which stands adjacent to Neuschwanstein Castle, famed for being the inspiration for Sleeping Beauty Castle at Disneyland. 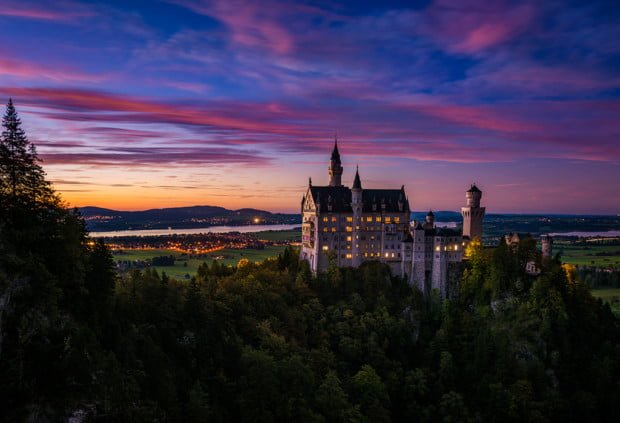 For me, Germany is also home to one of the greatest unbuilt attraction stories of Walt Disney World: Rhine River Cruise. This attraction is not just fan lore or internet urban legend. The attraction was officially announced, was detailed in Walt Disney’s EPCOT Center by Richard Beard, and was discussed in other promotional materials for the opening of EPCOT.

The premise of the attraction was that it’d offer EPCOT Center guests the chance to float down the Rhine, Tauber, Ruhr, and Isar Rivers on a leisurely boat ride, affording a “visual impression in miniature of the cultural heritage of Germany’s past and highlights of its present.”

Locations were to include scenes from the Black Forest, Oktoberfest, Heidelberg, the Ruhr Valley, and elsewhere. Detailed miniatures of famous landmarks would be featured, including Cologne Cathedral. From this, it would seem that Rhine River Cruise would be akin to Storybook Land Canal Boats, except featuring real-world Germany instead of European-inspired animated film locales.

The Rhine River Cruise is also fascinating because work had begun on it before it was cancelled. While we don’t know the full extent of the progress, we do know that the attraction’s entrance (now covered over) was set, and at least part of the show building behind it was constructed. (Per Imagineering Disney, the show building was not constructed in its entirety and it would seem the attraction was cancelled right around 1982.) 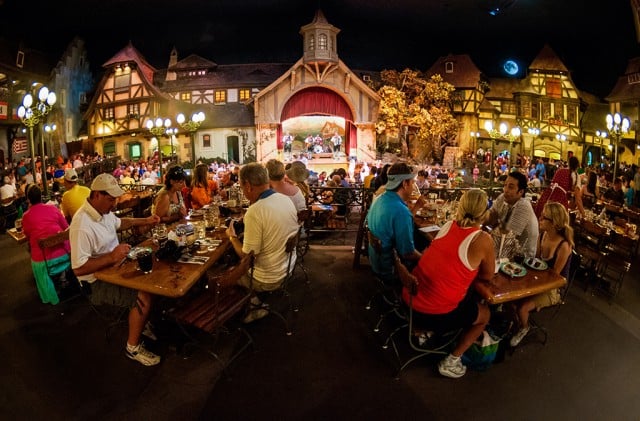 Now seems like as good of a time as any to highlight one of my favorite snacks in World Showcase: the Nudel Gratin at Sommerfest. I’ve neglected to review this counter service restaurant because it’s more a glorified kiosk than an actual restaurant, and the Nudel Gratin is nothing profound, just a simple yet delicious comfort dish of macaroni and cheese.

We’re also fans of Karamell-Küche, another dining spot in Germany for which we don’t have a review. We should really do a full review of this bakery, as the menu is pretty deep, and there’s a lot we enjoy here. My favorites include the Caramel Snickerdoodle Cookie, Caramel Pecan Bar, and pretty much any dessert with salted caramel. Oddly, the things that are “meh” for me are the varieties of caramel corn and apples, which are the most popular items there.

Here are some of our other posts about dining in Germany: 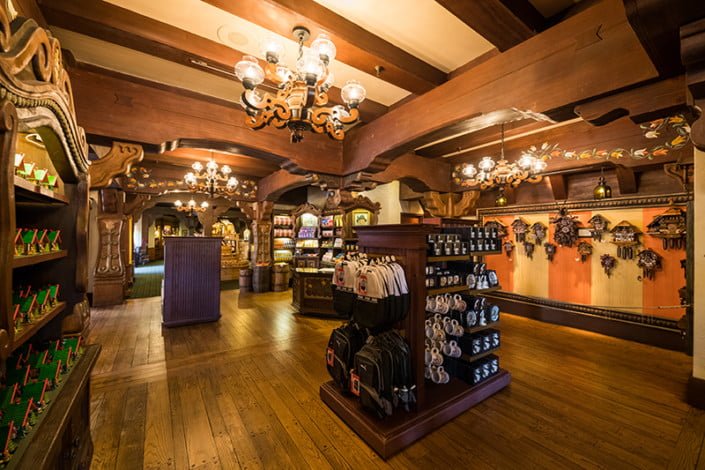 While I love perusing the shops in Germany for their beautiful and authentic items that could qualify as heirlooms, there are items at the other end of the spectrum that are kind of tacky. I realize that Germany is synonymous with beer for many people, but there’s a way to embrace that in a tasteful manner.

The good news is that so many pieces of merchandise do exactly that. The steins are really cool, as is the line of Biergarten merchandise. Most of the Disney character stuff is solid, too. As with the other European countries, Germany has a huge mix of Disney and non-Disney merchandise. Perhaps the most of any country in World Showcase.

There are also ornate cuckoo clocks, expensive toy train sets, and some beautiful Christmas ornaments. Out of all of this, my favorite piece of merchandise is the Mickey Mouse Steiff plush. The quality on this is exceptional, with the price to match! 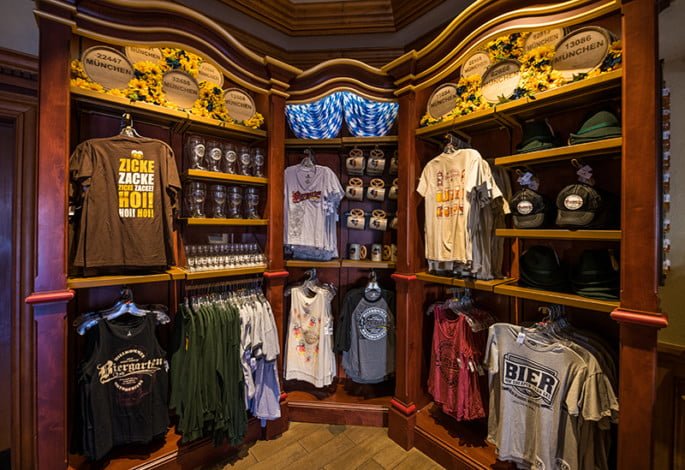 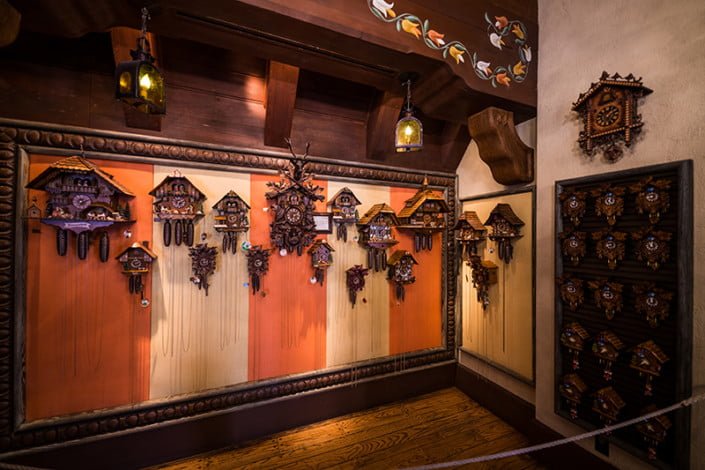 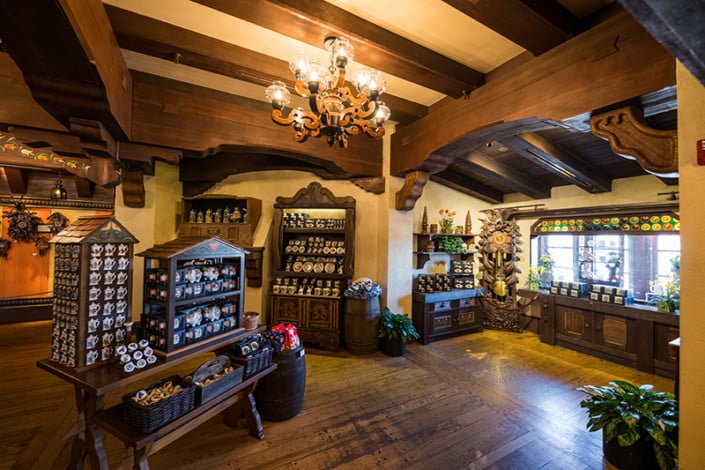 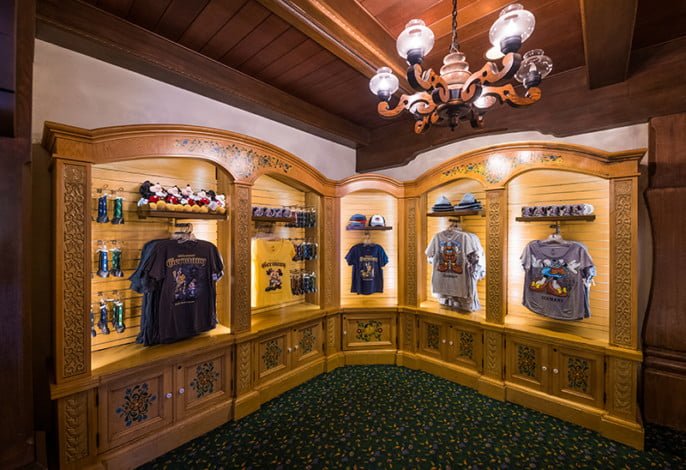 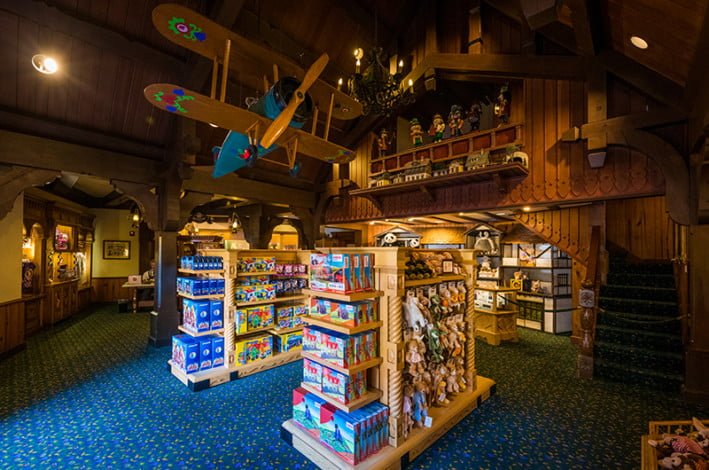 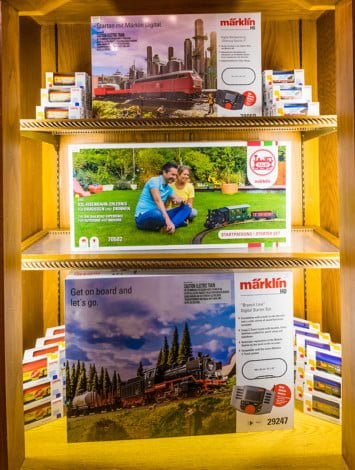 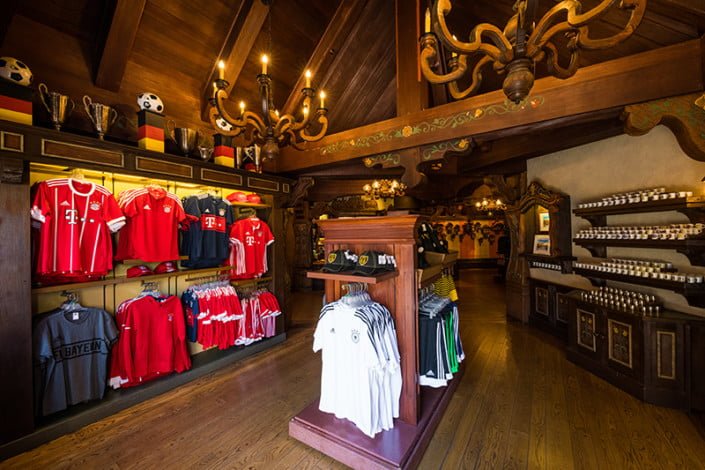 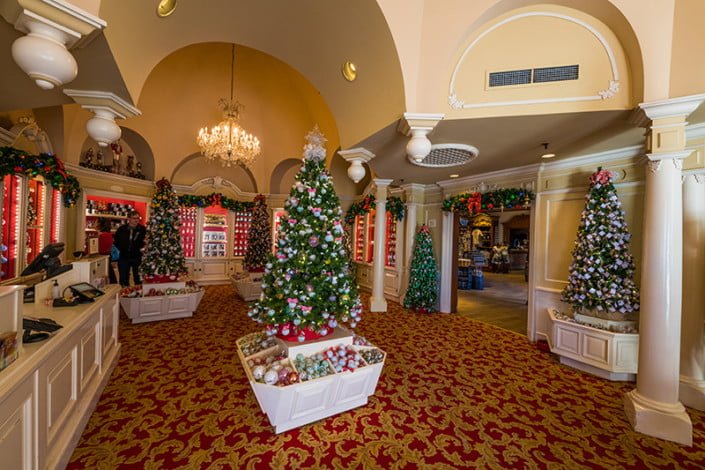 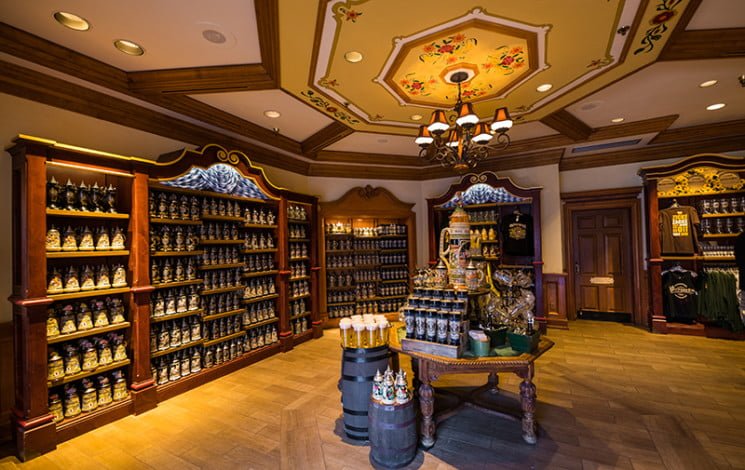 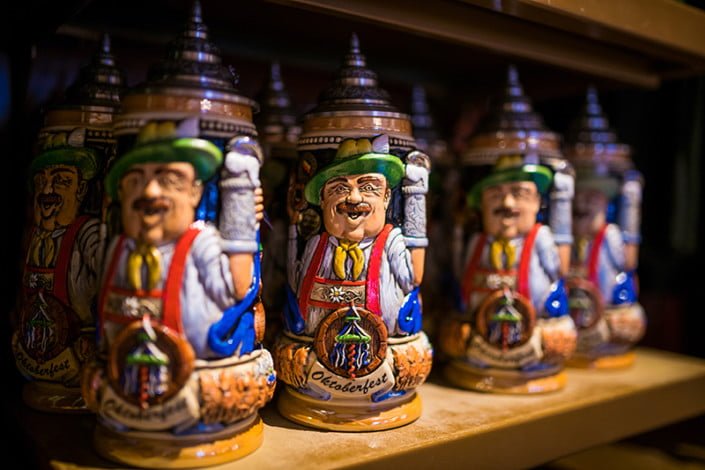 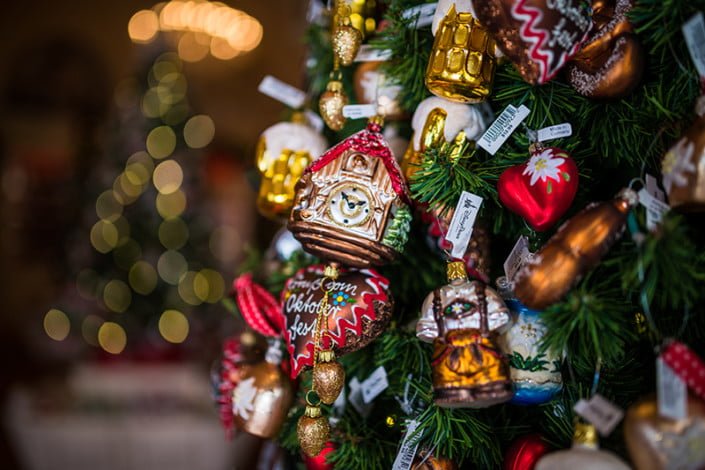 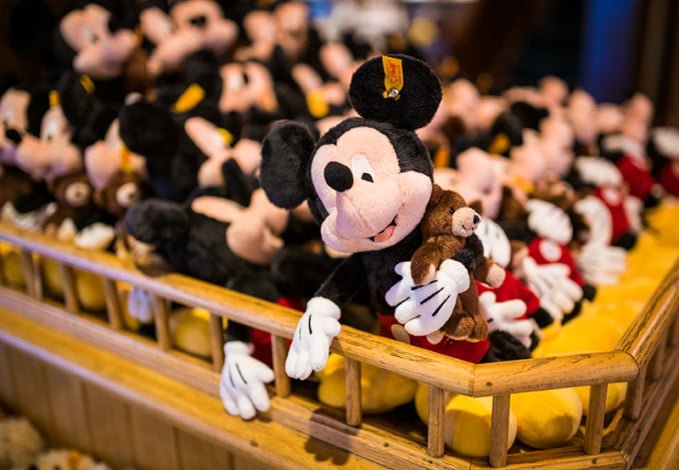 I just can’t get over this Steiff Mickey Mouse plush. It’s so classy and high quality. I feel like this is the Mickey Mouse stuffed animal that celebrities buy their kids, wanting to give them the iconic childhood toy, but a variety of which that’s a cut above what us commoners would own. You just know Blue Ivy wasn’t slumming it with the normal Mickey stuffed animal!

I’ll be honest: over the years, Germany has slowly fallen down my list of pavilions at Epcot. I have nothing against it (other than it seeming to be one of the top hangouts for Epcot “drinking teams”), it just seems to offer less to do and the courtyard area doesn’t really have any quiet areas to explore. Taking the time to slow down and wander through the shops gave me a renewed appreciation for the Germany pavilion, as there are so many exquisitely hand-crafted details inside the shops. It’s still not my favorite World Showcase country, but they can’t all be #1, and even my least favorite pavilions are still some of the best areas of Walt Disney World.

Did you learn anything about the Germany pavilion at Epcot from this post? Do you have any favorite ‘dream’ merchandise in the Germany pavilion that you’d love to own? Thoughts on dining in Germany? About the pavilion’s architecture? Any questions we can help you answer? Hearing feedback about your experiences is both interesting to us and helpful to other readers, so please share your thoughts below in the comments!

22 Responses to “All About Germany in Epcot”