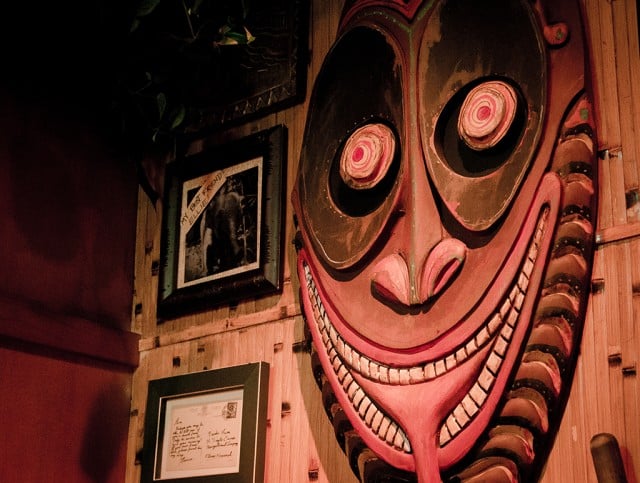 In our review of Trader Sam’s Enchanted Tiki Bar at the Disneyland Hotel, we called it “one of the greatest things Disney has built in years.” Our visits to Trader Sam’s since then have confirmed that, and it remains one of our favorite experiences at Disneyland Resort. With this post, I wanted to share photos of 10 of my favorite details (and what they’re referencing), along with the backstory of Trader Sam’s.

Beyond the tiki culture, the big draws of Trader Sam’s are the kinetic energy and layers upon layers of detail. The “bar” aspect of the establishment is a nice perk, but we’d love Trader Sam’s just as much if it were a waffle house (which is one of the big reasons why we recommend Trader Sam’s even to guests who don’t drink).

For regular guests of Disneyland or Walt Disney World, Trader Sam’s will be a familiar place, even upon their first visit. So goes the backstory of Trader Sam, a quirky adventurer and entrepreneur who has worked the shores of Disneyland’s Jungle Cruise as the “Head Salesman” of the jungle. There, Trader Sam is a wheeler-dealer, selling some of his “treasures” that he has collected and making that famous offer of “two of his heads for one of yours.” 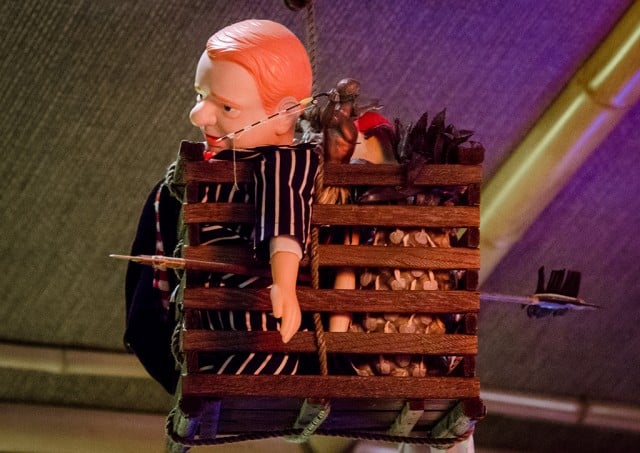 The backstory of Trader Sam’s bar is told through various letters on the walls. Here’s a basic overview: Trader Sam decided to open an Enchanted Tiki Bar where “his expertise in head-shrinking potions grew into an interest in mixology.” Being a very connected man in the import/export business, Sam called on his friends at the Jungle Cruise Navigational Company, to help him decorate the bar. With the artifacts provided by them and his letters and photos from his travels, he managed to thoroughly adorn the walls of Trader Sam’s.

I think it was a savvy move on Disney’s part to tie Trader Sam’s into the Jungle Cruise through its Navigational Company, as that opened the door for “artifacts” from locations all over the globe that share this type theming. Much like how Mystic Manor has expanded the S.E.A. (Society of Adventurers and Explorers) found at Fortress Explorations in Tokyo DisneySea into a worldwide Disney theme parks thing, the Navigational Company allows Trader Sam’s to have Easter Eggs from Disney parks around the globe without these being merely hat-tips or homages to those parks. So far, I’ve spotted artifacts or correspondence from Walt Disney’s Enchanted Tiki Room, Typhoon Lagoon, Indiana Jones Adventure, the Tower of Terror at Tokyo DisneySea, the Adventurers Club, Lost River Delta at Tokyo DisneySea, Sunshine Tree Terrace, and 20,000 Leagues Under the Sea. I’m sure there are more references that I missed. 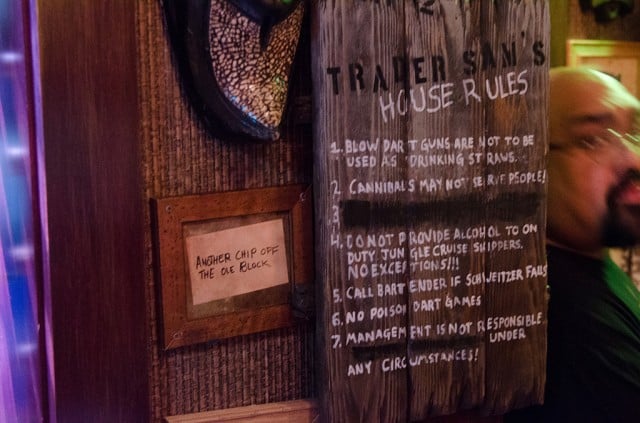 Trader Sam traveled all over the world to collect the ingredients for “Sam’s Gorilla Grog,” which is his secret base formula for his drinks. He faced many dangers along the way as he sought after these ingredients, and because of this, some of the drinks he serves have mystical powers. Ordering these drinks “disturbs the tiki gods,” which triggers special effects in the restaurant. We have more about the menu in our Trader Sam’s review, but in short, it’s spectacular, as are the special effects that go off in the bar when certain drinks are ordered. 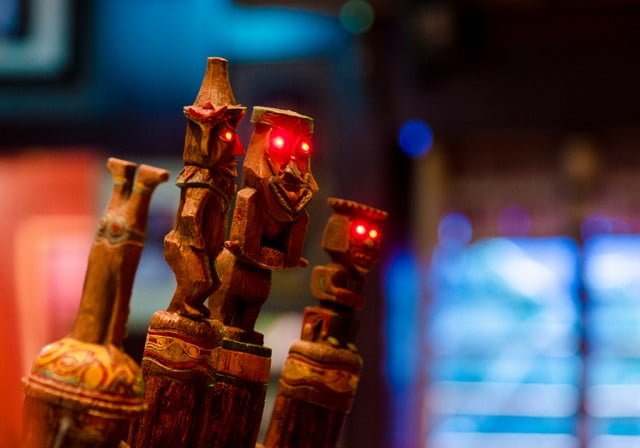 Unfortunately, in an era where something as insignificant as Starbucks coffee being served on Main Street USA leads to hundreds of blog posts and tens of thousands of forum posts that all more or less say variations of one or two things, there is almost zero documentation on the awesomeness that is Trader Sam’s. We want to do our part to remedy that, and to share some of our favorite details with those who haven’t visited this hidden gem…or who might have visited, but can’t quite remember the details of their visit for some reason or another. 😉

Here’s a look at some details–enjoy! 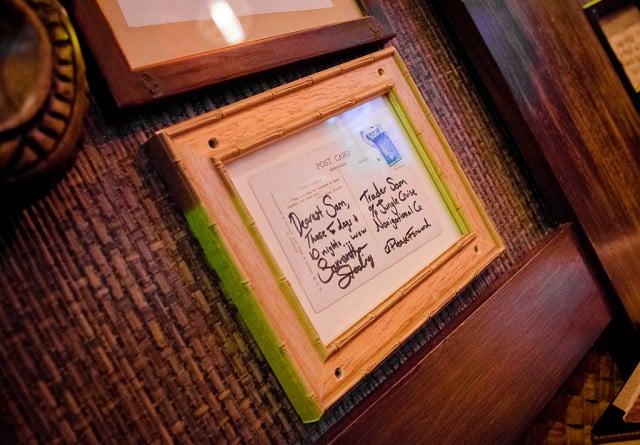 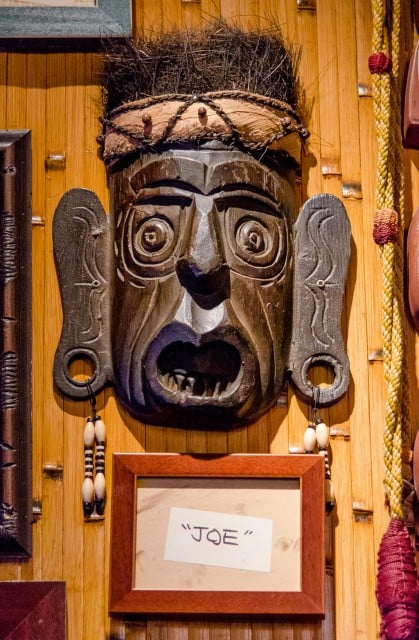 You know you’re a Disney theme park geek if you instantly recognize this tribute. It’s to Joe Rohde, Executive Designer and Vice President, Creative at Walt Disney Imagineering. Rohde is the Imagineer responsible for the Adventurers Club, Disney’s Animal Kingdom, and Disney’s Aulani Resort. He is also known for his various “ear-wear” and somewhat eccentric style. Based upon his portfolio and look, he’s the perfect Imagineer to honor in Trader Sam’s. (Heck, the restaurant should be named after him, but perhaps legal thought better of that…) 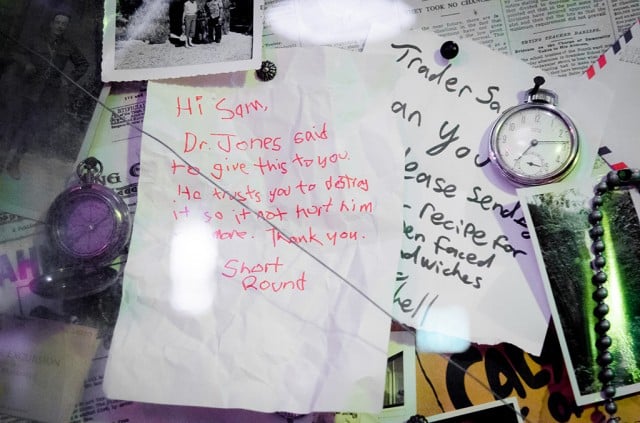 This should be fairly recognizable to anyone who has seen the Indiana Jones movies. There are a few correspondence that tie the restaurant to Indiana Jones–I just wish there was something from Sallah. Thanks to the Indiana Jones Adventure pre-show, he’s now my favorite character from that franchise. 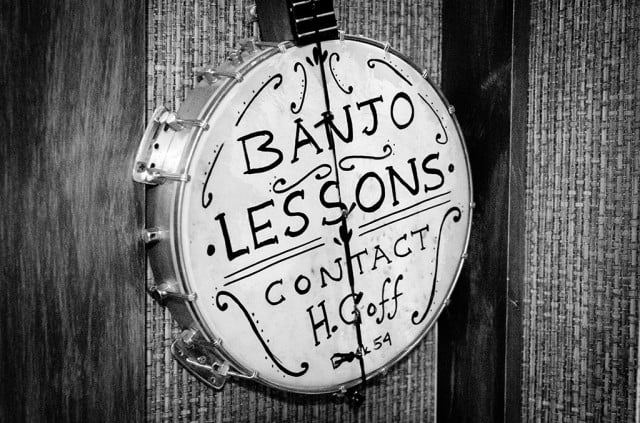 H. Goff stands for Harper Goff, who is a lesser-known original Imagineer who has been dubbed “Walt’s Second Imagineer.” He was a prolific banjo player and was incredibly influential in the original design of Adventureland. He also has a tribute in Adventureland at Disneyland; you can see that tribute and read more about Harper Goff here. 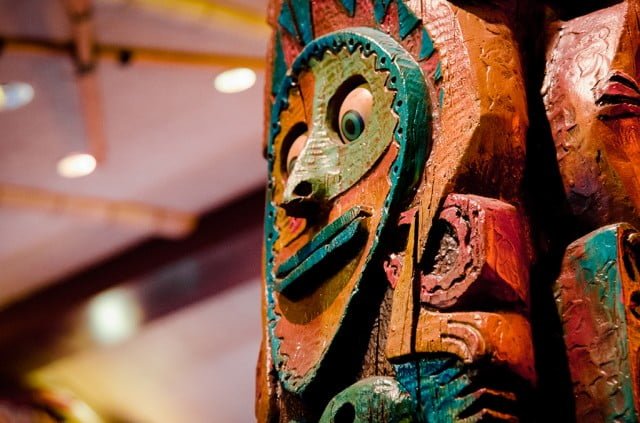 Walt Disney’s Enchanted Tiki Room is probably the best-represented attraction at Trader Sam’s, and these animated columns are one such example. Although this is inspired by the columns in the Tiki Room, it also reminds me of the Adventurers Club Mask Room. 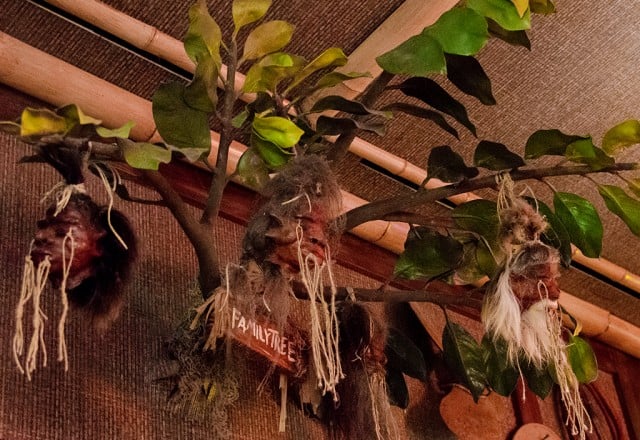 This family tree of three shrunken heads is obviously Trader Sam’s family tree, and is a reference to Sam’s position as head salesman of the jungle on the Jungle Cruise. Interesting that Sam is shrinking the heads of his own family…perhaps the three heads he’s trying to trade for your head are his relatives?! Or, perhaps this “family tree” is just a combination of a pun and a nod to the Jungle Cruise joke, and not actually Sam’s family… 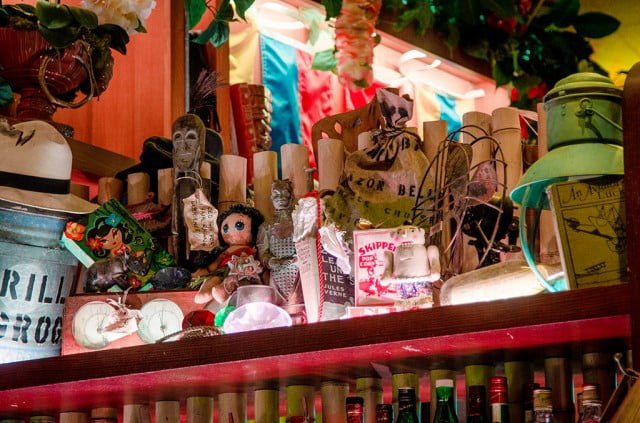 This shelf is filled with a variety of artifacts and Disney references (just a bit further down is the coin jar from Up). Most noticeable here is a 20,000 Leagues Under the Sea book and a can labeled “Gorilla Grog,” which is Sam’s secret elixir blend. 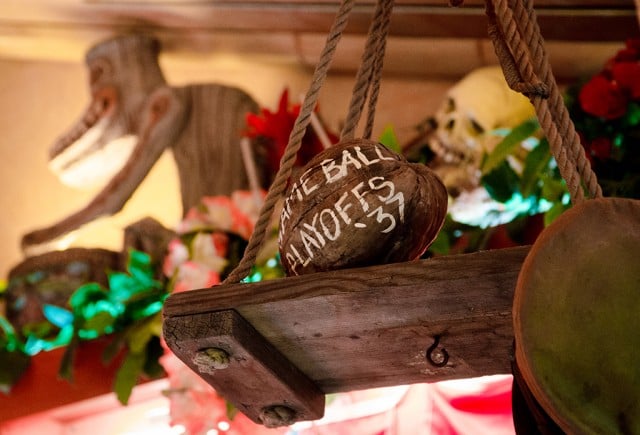 I really like this one, but it’s perplexing. I have no idea what this “Game Ball Playoffs ’37” is referencing. I know the Adventurers Club opened in 1937, but I don’t know enough about the Club’s history to know if that’s the extent of this reference, or if there’s something more to it. I’ve pondered this question and tried to get help from others, all to no avail. Right now, it remains my great Trader Sam’s unsolved mystery (even though there are plenty of other things I’m sure I’ve missed). Anyone know the answer? Also note the Tiki Drummer in the background. 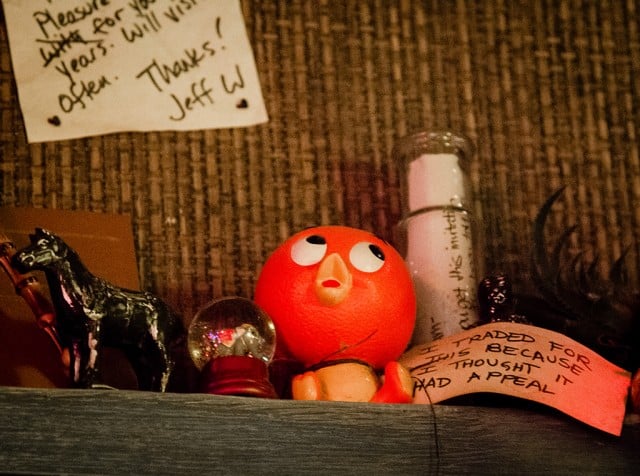 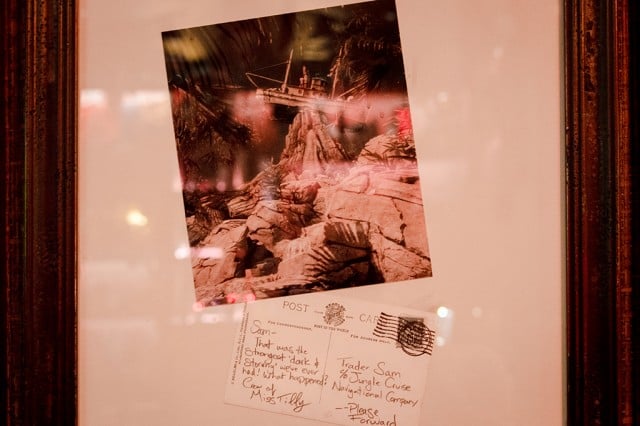 This one should be pretty obvious to Walt Disney World fans. That’s Mount Mayday, the icon of Typhoon Lagoon. Miss Tilly a shrimp boat that found its way there during a devastating tropical storm and became impaled upon a mountain. Either the boat learned to write, or its namesake sent Sam this postcard, which appears to reference both the storm at the heart of the Typhoon Lagoon backstory and a particularly intense night of drinking that the two shared.

These are just a few of the hundreds of details inside Trader Sam’s that make the place so much fun to explore. Kevin Kidney and the whole team behind the restaurant did a great job with it. The ambiance is spectacular, the drinks and food are great, and it exudes that old level of Disney detailing and storytelling. Hopefully this helps explain why Trader Sam’s is a place where we could spend hours relaxing and conversing–and why it should definitely be a stop on your next Disneyland trip!

For actual Disneyland trip planning tips and comprehensive advice beyond these quick and random tips, make sure to read our Disneyland Trip Planning Guide and related articles.

For updates on Disneyland and Walt Disney World, the latest news, discount information, and tips, sign up for our free monthly newsletter!

Which part of Trader Sam’s theming is your favorite? Do you hope to visit Trader Sam’s one day…possibly if one opens at Disney Springs in Walt Disney World? Share your thoughts in the comments!