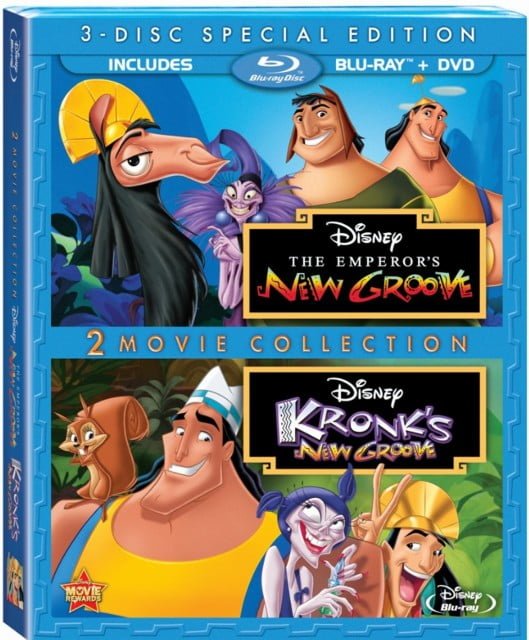 The Emporer’s New Groove and its sequel, Kronk’s New Groove are now out in a 3-disc special edition Blu-ray and DVD set, and this review will give you an idea of whether they’re worth buying! Before we get there, though, you should know a little more about The Emperor’s New Groove that might make the film a little more interesting. I won’t waste my words here on how the production of Kingdom of the Sun (the film’s original name) was troubled almost from day 1, as there’s a great documentary titled The Sweatbox that does a great job of covering that. The Sweatbox leaked last year and Disney has been attempting to suppress it (it has never been commercially released) since, so good luck finding it. Depending upon how ‘net-savvy you are, you should be able to find a copy of it online to this day. That documentary might deepen your appreciation for The Emperor’s New Groove and its quality despite its troubled path to existence, or it might make you yearn for what the film isn’t and what it could have been. Admittedly, I fall into the latter camp.

As for what the film is, it’s…eh…okay. Much like Treasure Planet, which we reviewed last year, it’s not an animated “classic.” By that, I mean that it’s not timeless. It too often goes for cheap laughs, is overly simplistic, and suffers from under-developed characters. Beyond that, the animation has a modern, angular quality that just doesn’t work for me. Despite these complaints, it’s actually not half bad. More than anything else, it’s “fun.” It’s funny, it’s energetic, and it’s a current (sorta) take on a timeless story. Actually, I might rather like it if it weren’t a “Disney animated classic” and if I didn’t know what could have been. It just is very clearly a product of its time period, and I don’t ever see it becoming anything more than a fleeting hour and a half of fun, as compared to the masterpiece that Kingdom of the Sun could have been.

It’s always concerning when two films are packed on the same Blu-ray, but video quality is good…although there are some minor issues with halos and edge artifacting (due to compression?). Otherwise, video here is solid, with strong colors, contrast, and a very sharp picture. Not so sharp that there should be any concerns with oversharpening, though. Again, the issues are minor, so don’t let them stop you from purchasing. This is otherwise a great video transfer that looks great. (I can’t compare it to the previous DVD release as I don’t have that, but there’s no doubt that it’s better.)

Sound is also very well done, although nothing mind-blowing. This is not a movie that relied upon an impressive soundtrack to wow moviegoers. Success here is measured largely by whether the remix is distracting or over the top, and it’s not. The 5.1 DTS-HD MA soundtrack is solid and well-mixed. providing crystal clear dialogue and songs.

Unfortunately, the extras are a complete letdown. This shouldn’t be a huge surprise, as this is one of Disney’s “less important” titles, which is evident from the fact that it didn’t receive its own spring or fall release date (it was dropped in bulk with a few other titles on the same day) or any fanfare. As such, there’s nothing new for this release, and all of the extras (including the commentary!) are relegated to the DVD. I mean I’n not really surprised that Disney left out The Sweatbox, but certainly there are some more extra features concerning the film’s troubled development. Some of those stories probably wouldn’t make Disney look too badly…

Overall, the audio and video quality are very solid, so that’s going to be the basis for whether you should purchase the set. Since the main reason to upgrade to Blu-ray copies of most films is for improved audio and video quality, this isn’t such a bad thing, but it’s still lame that there aren’t some new extras to sweeten the deal. If you love the film and want the best viewing experience possible, upgrade to this. If you’re a casual fan or don’t care all that much about A/V quality, you can probably pass on this set.

Buy this Blu-ray/DVD on Amazon by clicking here.

Have you seen The Emperor’s New Groove? What about The Sweatbox? What do you think of them? Share your thoughts in the comments!