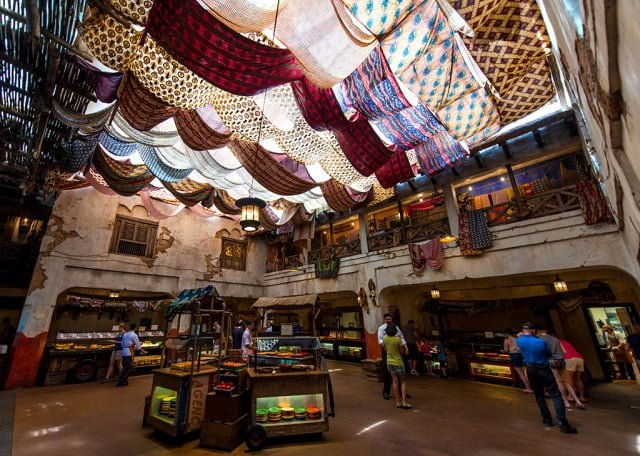 Tusker House is a character buffet at Walt Disney World, in Animal Kingdom, with a mix of African cuisine and more standard American fare. This review concerns lunch at Tusker House, which now ranks as new top character dining experience in terms of both value and food quality.

Before we dig into the food, let’s talk ambiance at Tusker House. It’s no surprise that the theming at Tusker House is top notch, with incredible attention to detail and a lot fun little touches. It actually looks like a weathered marketplace you might find in Africa. You know, if Disney characters roamed African marketplaces. With the exception of the touches of Disney, Tusker House’s theme is executed so well that you might be able to pass photos of it off as an actual marketplace in Africa.

No detail is overlooked, and the restaurant really works well, especially for an adult audience… 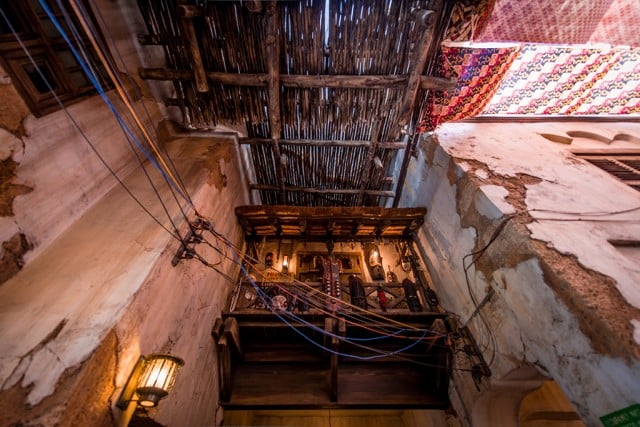 I’m not the biggest fan of Animal Kingdom, but this is one of the things I absolutely love about the park. The details are so meticulous and go beyond just the “big picture” stuff. You’ll see the “unpleasant” details like power lines and random/odd signs, which give more authenticity and make it feel less like a sanitized version of a foreign locale.

About the only thing that would make it more authentic is piles of animal feces in the walkways. Ironically, this is something Animal Kingdom “lacks,” but Magic Kingdom sometimes has! In general, the restaurants at Disney’s Animal Kingdom really seem to excel in terms of theming, and I think Tusker House is probably the cream of the crop here. 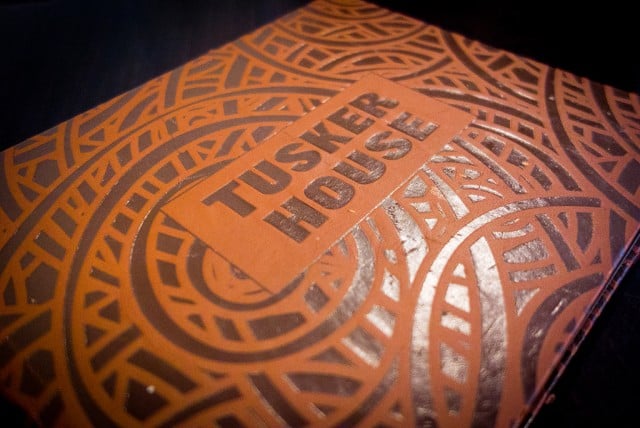 When it comes to food, Tusker House is difficult to beat. Since this is character dining that appeals primarily to families, Disney wisely offers standard options in addition to the more adventurous African foods. I would say it’s about a 60/40 split in favor of the African foods (maybe 75/25).

Regardless, there are a ton of options–so many that everyone is sure to find something they like. The greater difficulty is going to be trying everything, as there are simply so many choices that even if you have just a little of everything, you’re likely to be full after completing your first “round,” leaving little room for going back to have more of your favorites. 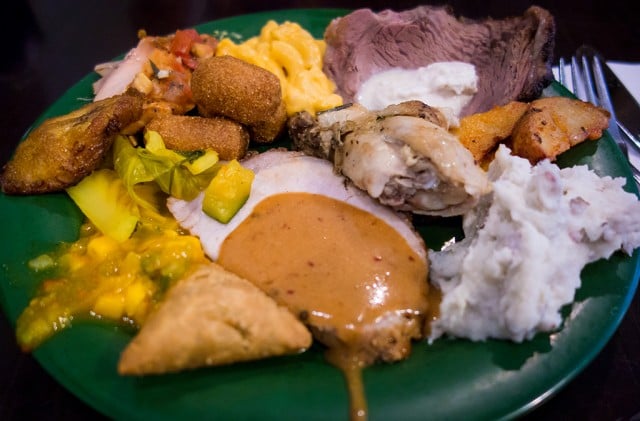 The big draws at Tusker House, as they are at every buffet that offers them, are the spit-roasted meats that are sliced in front of you at the buffet (pictured above). Tusker House had pork and beef when we visited, and although both of the names suggested African rubs or seasoning, these tasted a lot like their American counterparts.

These meats were also delicious: perfectly cooked, flavorful, moist, and the seasoning was delicious without overpowering. Picky eaters shouldn’t be scared by the names of these meats, and adventurous eaters should give them a try despite these options being fairly standard. 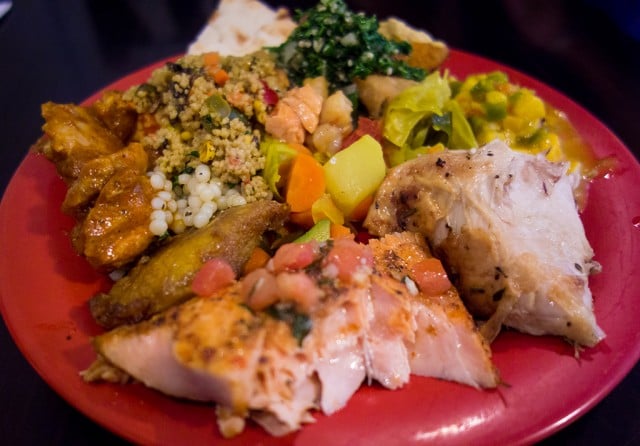 Some of our other favorite items on the buffet included the seafood stew (I absolutely loved this), the plantains, curry chicken, both types of salmon, cucumber salad, and root vegetables. And those are just the things I remember the names of! There was also some sort of mango salad stuff that I absolutely loved (pictured in the middle of the plate below).

Sarah, being a notoriously healthy eater, loved just about everything on the buffet here (although she didn’t give the corn dog nuggets a chance…what a communist!). Everything the buffet serves is pictured on the plates in these photos, but I am far too lazy to take photos of each serving station at the buffet; check out easyWDW’s review for that.

I think there were a couple of items our buffet had that his didn’t, but it’s materially the same everyday. If you’re considering breakfast at Tusker House, Disney Food Blog has you covered with photos from that. 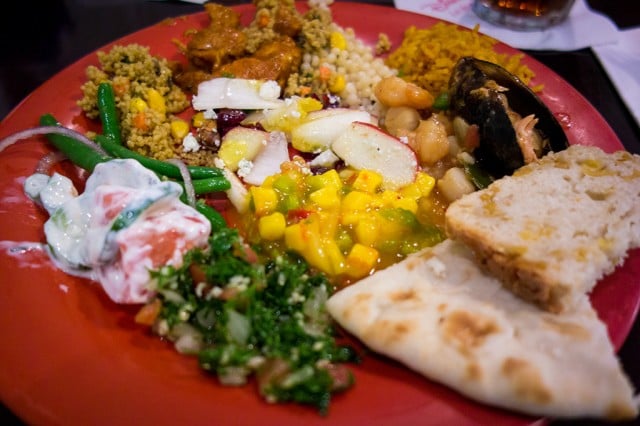 The one letdown at Tusker House was the desserts. The banana bread pudding is amazing, but everything else feels like an afterthought. There are a few other dessert choices, but neither of us liked a single one of them. They all tasted mass-produced or lacking in flavor compared to the rest of the meal. 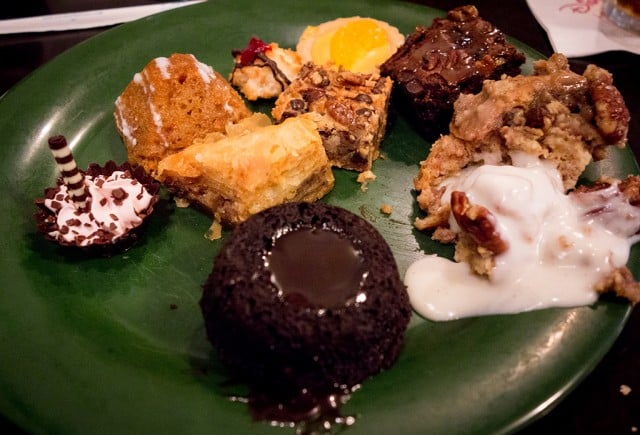 For all of our praise, character interaction is one thing we noticed seemed to be sub-par at Tusker House. The restaurant is large and has several different rooms, likely making it difficult for the three inside characters (Goofy, Mickey, and Daisy) to get around to everyone.

To their credit, Cast Members in the restaurant are mindful of this, and let us know the characters would be around later. When they were “later” taking longer than expected, they again let us know that they hadn’t forgotten about us. I noticed them doing the same in other areas of the restaurant. Still, it took around an hour in Tusker House before the first character was at our table. 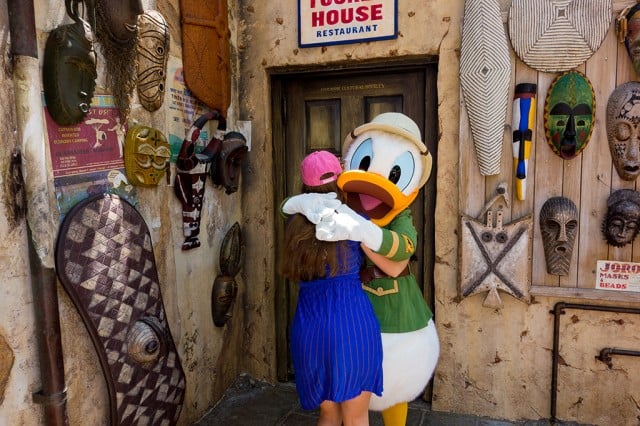 When the characters did show up, it was only for quick poses and then they were off again. We never ended up meeting Daisy because the first two characters took so long, and because the character attendants didn’t come over with the characters, meaning we each had to take a picture of one another and then hand off the camera, causing us to just give up on her and leave (on the plus side, Sarah lucked out in not having to be in a photo with me doing the dorky pose below!).

This seems to happen often at character meals, and is a bit irritating. Perhaps most families are fine with mom or dad taking photos of the kids and not being in the shot, but that’s presumptuous, and the alternative is kindly interrupting someone at a table next to you (which we’ve found is not usually imposing, as most times they want the same thing, and ask you to reciprocate) or not having everyone in the photo.

Part of me wonders why Donald is stationed outside if the characters inside are stretched so thin. It could be to sell the photo packages, or perhaps it’s to make sure everyone sees him on the way in. Disney being Disney, I’m putting my money on the former. Figuratively, as I wouldn’t actually put money into one of those photo packages. 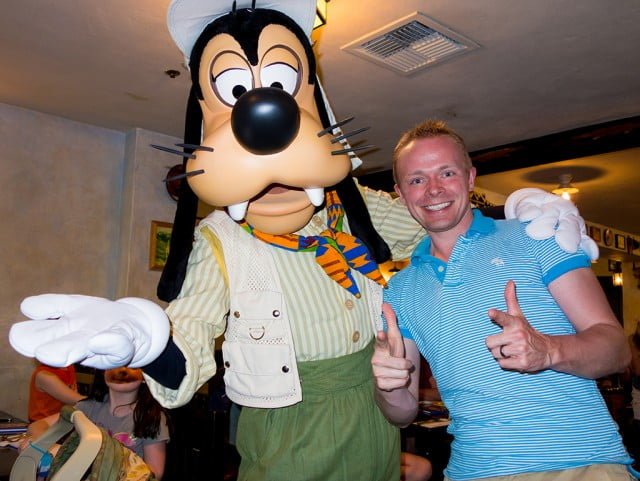 All of this makes for a sort of interesting dynamic to Tusker House. You have this incredible theming that is most likely going to appeal to discerning adults, along with some excellent buffet options that are on-par with the type of adventurous foods you’d find at Sanaa or Boma. And then, at the other end of the spectrum, you have characters, which primarily appeal to families.

All of this appeals to Sarah and me, so it’s just about the ideal restaurant for us, but we are probably the exception rather than the rule. For everyone else, Disney balances the “competing” dynamic perfectly. There are plenty of standard family-friendly food choices, and the presence of characters is not so in-your-face that Tusker House should scare away couples just looking for a good meal.

Overall, Tusker House is a great option for just about anyone. It does have a few flaws, but they are so insignificant or compensated for (in the case of the dessert) that they don’t really make a difference. Our experience with the characters could be an anomaly, but with the set-up and size of the restaurant, we suspect this is a regular issue. Regardless, they have awesome costumes and the theme is so excellent that we weren’t disappointed. Those considering Tusker House primarily for the character interactions may not feel the same way, though, and judged solely as a character meal (emphasis on characters), it’s just slightly above average. In terms of food, the menu trails only Boma in terms of buffet quality and diversity (and we haven’t done Boma since 2008, so that may no longer be true), but it’s cheaper than Boma, has slightly better ambiance, and has characters. This gives it the ever-so-slight edge over Boma as our pick for the top overall buffet at Walt Disney World. For all of these reasons, we highly recommend Tusker House.

Do you agree with us that Tusker House is the top overall buffet at Walt Disney World, all things considered? How do you think Tusker House compares to other character meals? Planning on going? Share your thoughts in the comments.