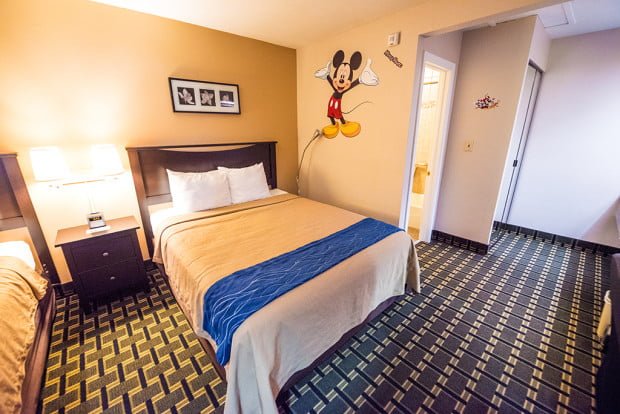 Stanford Inn & Suites is a Disneyland Good Neighbor Hotel for budget travelers located near Disney California Adventure and just beyond the Anaheim Convention Center. This review includes photos of the hotel rooms, thoughts about our experience of staying here, and to whom I’d recommend this hotel.

Sometimes, a hotel totally defies expectations. This is most definitely the case with Stanford Inn & Suites. I stayed here a couple of weeks after Alamo Inn & Suites, and based upon the location (we’ll get to that) I was absolutely expecting the worst. It probably couldn’t be worse than the Cecil Hotel in Los Angeles, at least. A pretty low threshold, but sometimes a little perspective is helpful.

I only stayed here because I have a serious case of self-loathing, and wanted to see just how scary it was. Not really. Actually, I saw it for a really low price on Hotel Tonight, and reviews on TripAdvisor put it as the #15 hotel in Anaheim. Having unfortunate experiences at other highly-ranking hotels, I was apprehensive, but I figured what the heck. YOLO, amirite? (Sorry, that will never happen again.)

Per its own website (but not the Disneyland listing page), Stanford Inn & Suites is a Disneyland Good Neighbor Hotels. Honestly, I have been listing this categorization in these reviews because people seem to care, but it’s totally meaningless. Hotels can pay for the distinction to be a Good Neighbor, and then pay more to be on the Disneyland page. I think it’s all about the money, and not being inspected and “certified” by Disneyland or anything of that sort.

If you want to know how Stanford Inn & Suites actually stacks up to the competition (at least in my opinion), check out our Disneyland Hotels Reviews & Rankings post. I can assure you none of the hotels there are featured based upon payment to us (although if some Disneyland-area hotel wants to offer us a boatload of money, I’m sure something can be arranged! 😉 )

Stanford Inn & Suites most definitely was not as awful as I expected. But, that doesn’t mean it comes highly recommended…

When you approach Stanford Inn & Suites from Harbor Boulevard, this is the sign that greets you: 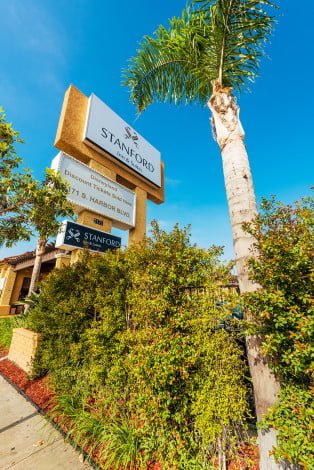 Okay, we’re not exactly off to a good start. The curb appeal here isn’t the best, and the adjacent businesses don’t exactly reassure, either.

However, once inside the main lobby, I was greeted by two incredibly pleasant and nice workers, one of whom I assume was the owner (or manager?) based upon his attitude and how he helped resolve an issue with someone who had to end their reservation early. I don’t normally comment on service in these reviews, but since the attitude of the staff throughout my stay was wholly at odds with what you’d normally expect at a hotel that looks like this, I figured it worth mentioning.

They asked me if I had a preference on a room, and I responded that it didn’t really matter, which was my first mistake. I ended up in the upstairs corner room closest to Harbor Boulevard. 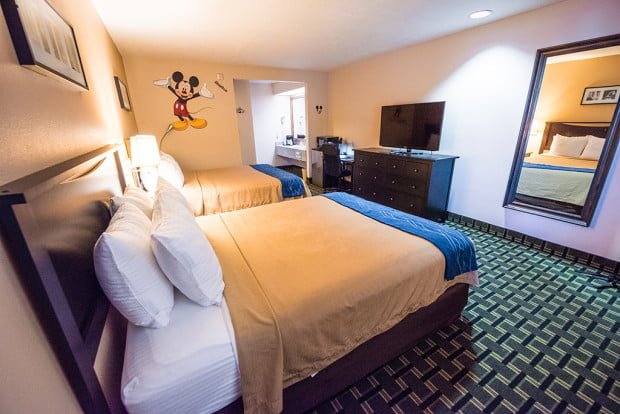 To my surprise, though, the room was quite nice. It looked clean and relatively modern, which was not at all what I expected. The Mickey Mouse decals stuck on the wall were an unfortunate choice given that the style otherwise wasn’t half bad. I’m willing to give that a pass as some misguided attempt at making it have more “Disney” appeal. 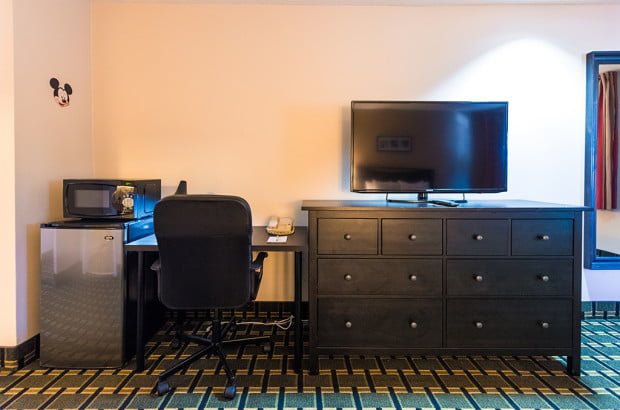 The fridge, microwave, dresser, and television were all new and nice. There was a sound selection of cable television choices, too. The room also had a safe and an efficient air conditioner. It was far from the epitome of luxury, but it generally felt new and well-maintained. 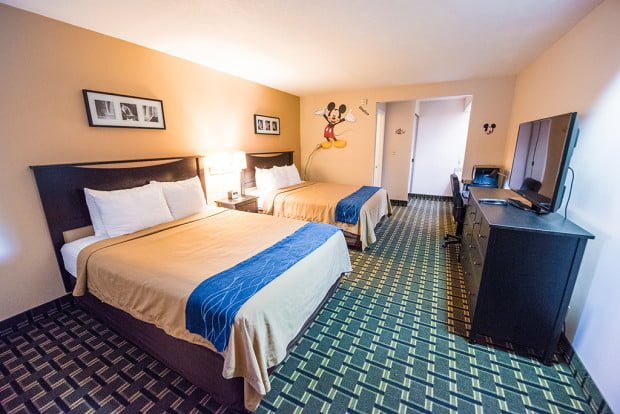 Being an experienced shopper (not by choice) of HomeGoods, it felt a lot like it had been decorated with furniture from there. Add to that relatively comfortable mattresses, and I was a fan of the room. About the only downside was that the blankets and sheets were a bit subpar. 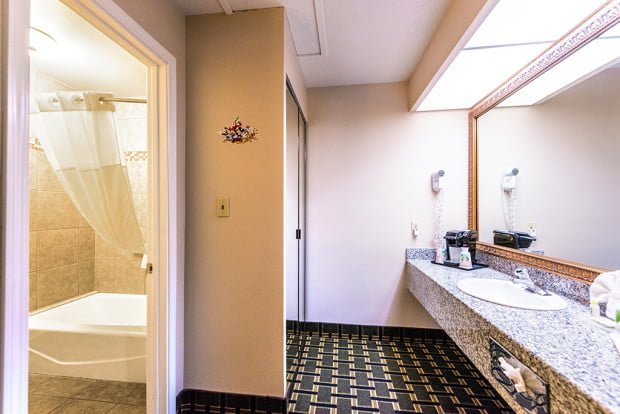 The bathroom area likewise felt fairly clean and relatively modern. As compared to most other budget motels in the area, it was impressive. There was even a Keurig machine! 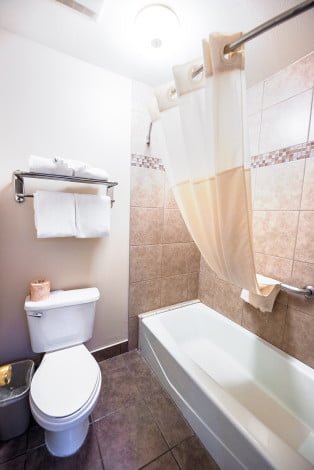 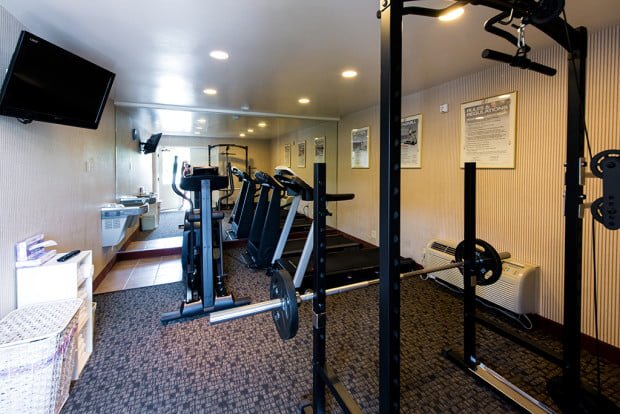 As far as amenities go, Stanford Inn & Suites is pretty basic. There are three key ones: free parking, free WiFi, and free breakfast. The breakfast was mostly basic cold items, and was passable, but far from special. To my surprise, there was also a workout room, but again, it was very basic. Stanford Inn & Suites also has a pool, and I’d rate it as “fine.” I haven’t–and wouldn’t–use the majority of the pools at Anaheim hotels. Your pool standards may vary, but this one looked neither awful or amazing. 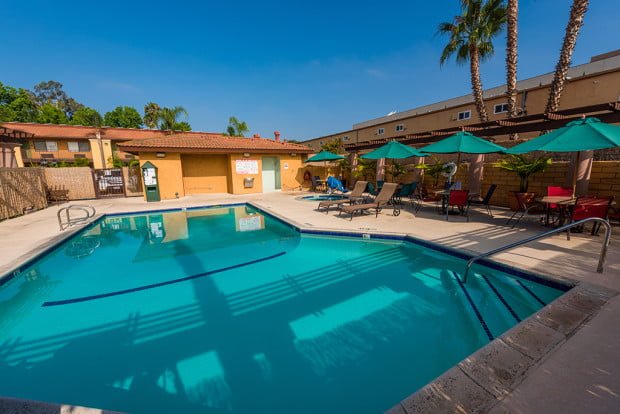 I said I’d get to location, and that’s admittedly the biggest downside of Stanford Inn & Suites. It’s not necessarily in a bad location (there are a couple of questionable places in the immediate vicinity, but also some nice hotels just down the road), but it’s not the greatest, either.

Add to that the fact that it’s nearly a mile to Disneyland, and you have quite the hike just to get to the parks. It took me about 25 minutes to walk to the Esplanade from here, which isn’t bad, but I also walk at a brisk pace. I suspect most guests staying here will drive or take the ART (the stop is right in front of the hotel) to Disneyland. If you’re not going to walk, you might as well just stay a little farther away and get more bang for your buck or a hotel with more amenities. 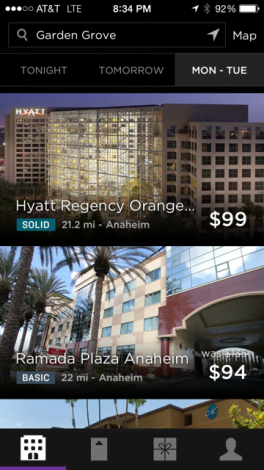 I paid $79/night for my stay at Stanford Inn & Suites through the Hotel Tonight app. It’s on there incredibly regularly (almost nightly), but rates can fluctuate dramatically. In the $70s is about as low as I’ve seen it, but I’ve also noticed it as high as $140/night. If you are comfortable winging it a bit and don’t mind potentially staying at a different hotel on Harbor Boulevard, I highly recommend waiting and using Hotel Tonight to book.

You can book via Hotel Tonight up to a week in advance and there’s always availability in Anaheim within walking distance of Disneyland, even on the day-of.If you are more of a planner and want a safety net, just book another hotel independently with a loose cancellation policy, and cancel that stay once your Hotel Tonight window opens. Use code TBRICKER1 to save $25 on your first booking via Hotel Tonight.

Overall, Stanford Inn & Suites is an unexpected gem considering how it looks from the road and the hotels immediately adjacent to it. The hotel offers tremendous value given the room quality, free WiFi, and free parking, and is great for those who want a budget walking distance hotel, but who don’t mind a bit farther of a walk. If this is not a walking distance hotel for you, or if you want superior amenities, I would recommend looking elsewhere–either a bit farther away in the former case, or at more expensive hotels in the latter case.

Have you stayed at Stanford Inn & Suites in Anaheim? Did you enjoy your stay? Were you pleasantly surprised by the rooms? Considering this hotel? Do you prefer staying off-site or on-site at Disneyland? Please share your thoughts or questions in the comments section below!