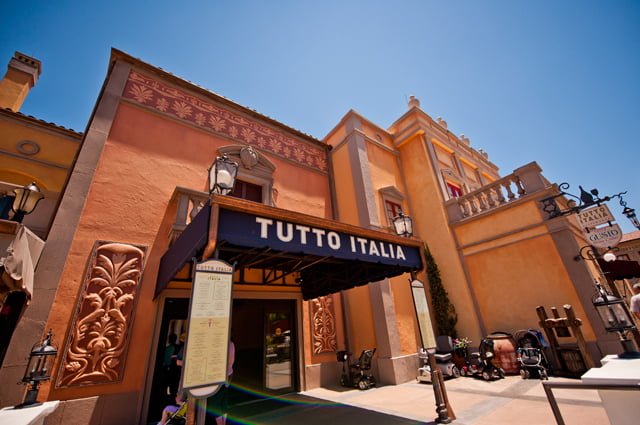 Tutto Italia Ristorante is a table service restaurant in the Italy pavilion of Epcot’s World Showcase, in Walt Disney World. It’s one of two table service restaurants in Italy, with the other being the (SPOILER ALERT!) superior (/spoiler) Via Napoli (read our Via Napoli review here). This review features photos of the food, our recommendations at Tutto Italia, and general thoughts on whether it’s worth doing.

Tutto Italia is themed with a bit of old world charm and superficial elegance, with a nice looking seating area and murals (some good, some okay) on the walls that are reminiscent of what you might find in a quaint Italian restaurant. 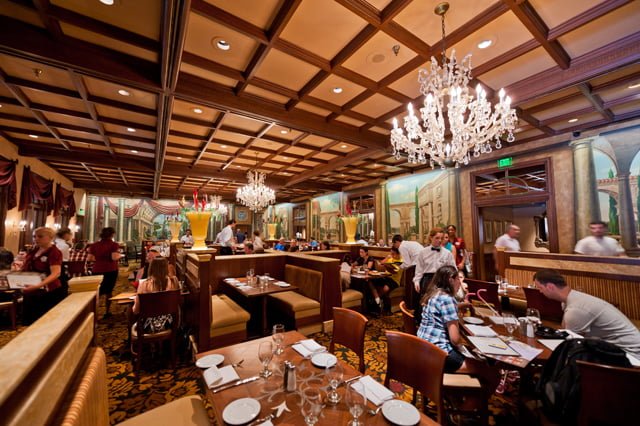 The look and feel of Tutto Italia work well. The restaurant looks nice and although the murals are cheesy, Tutto Italia doesn’t devolve into Italian kitsch like Buca di Beppo. Although to be fair, Buca di Beppo clearly goes for kitsch, whereas it seems that Tutto Italia is going for a more elegant look without any kitsch. Regardless of what Tutto Italia seeks to achieve, it works rather well and produces a relaxing environment where guests feel as if they’re in a nice Italian restaurant.

Tutto Italia’s menu offers a variety of different choices, mostly American takes on Italian cuisine. The menu is actually pretty thorough and varied, so you can’t really say it’s mostly _____ (chicken, seafood, etc.) with some other dishes tossed in. This is definitely works in its favor, especially for those traveling with picky eaters (although, despite some of the names, these are mostly simple dishes). 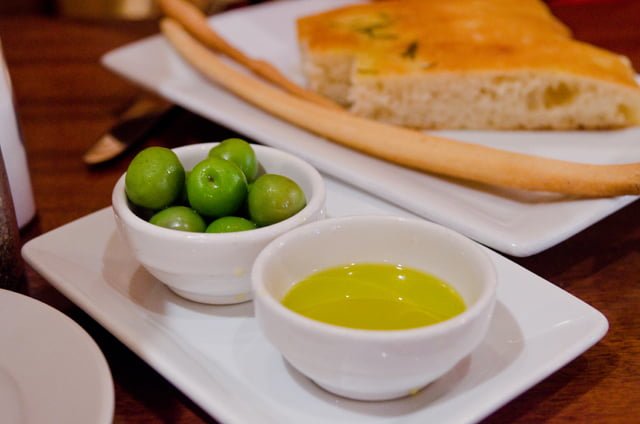 I suspect Tutto Italia, when busy, wouldn’t be as enjoyable of an experience. The dining area is, more or less, one large room. While there are some fabrics and other features that likely absorb sound, I suspect it could get quite loud. So if you visit during the the Free Dining promotion, don’t expect the relaxing restaurant that I describe above. When we visited, the restaurant was not crowded at all. 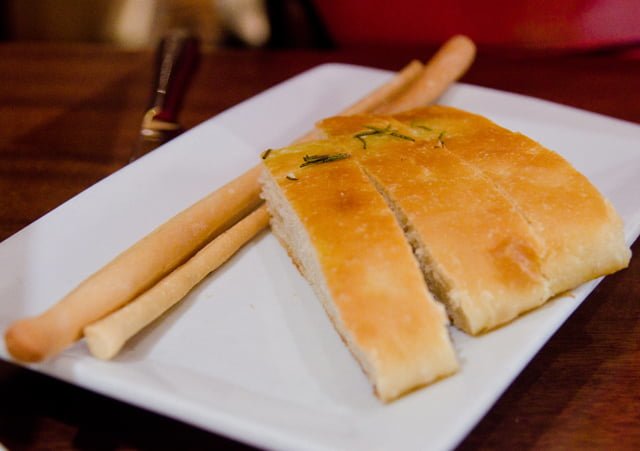 A meal at Tutto Italia starts with bread service. Our bread was soft and moist, and tasted pretty great when dipped in the accompanying oil. The olives were similarly good. This was actually some of the best bread service we’ve had at Walt Disney World, although I personally prefer a nice warm loaf of bread with some garlic butter. 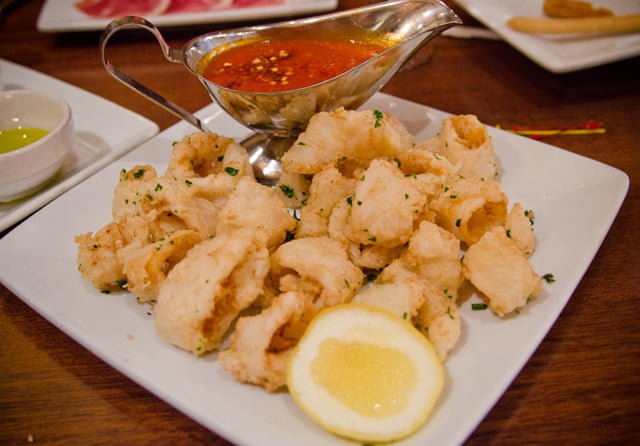 For our appetizers, I ordered the Calamari Fritti and Sarah ordered the Prosciutto di Parma. Both of these appetizers were excellent. My calamari was nice and meaty, rather than being a little bit of meat covered with a lot of breading. I’ve yet to meet an order of calamari that I haven’t enjoyed, but this was especially good. 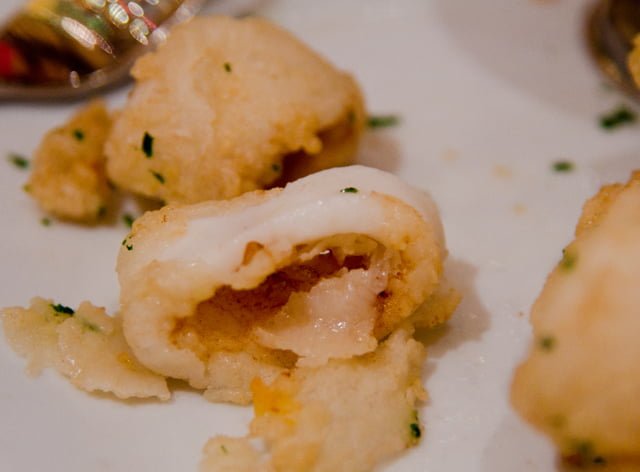 Sarah similarly liked her appetizer. The ham on her plate was quite good, as were the frittos. I will note that the combined cost of our appetizers was $31, which I consider to be expensive, even by Disney standards. If these were complex appetizers or something with a lavish presentation, I could have understood the price, but these appetizers were neither. 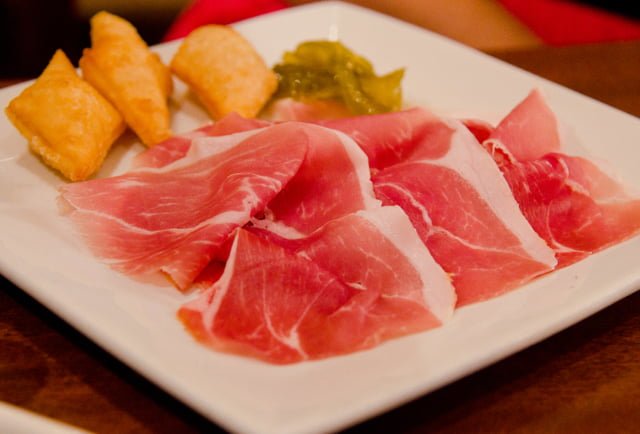 Next up was our main course. For all of the items on the menu, we both had a difficult time decided what to order. After much debate, I decided on the Spiedini di Spada (swordfish skewers) and Sarah got the Salmone. When our plates appeared, we decided to switch. 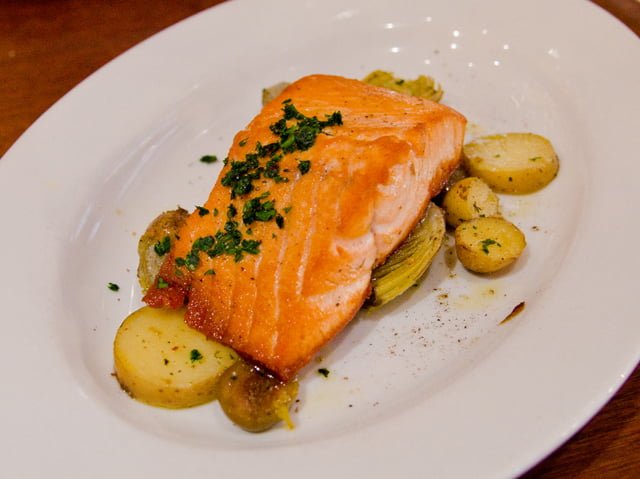 I can describe both of our dishes in one word: bland. Most of the richness and flavor you’d expect from a good Italian restaurant was absent. Our dishes were probably even a cut below a chain like Olive Garden, too. 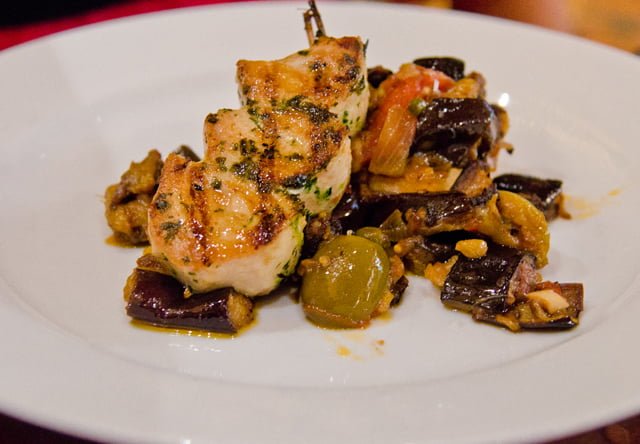 It was as if they were prepared by a regular American restaurant (definitely not a seafood restaurant) that drew inspiration from Italian cookbooks as far as ingredients went. The garnishes (especially the chickpea fritters with the swordfish skewers) were pretty good, but overall, the main entrees fell really short. 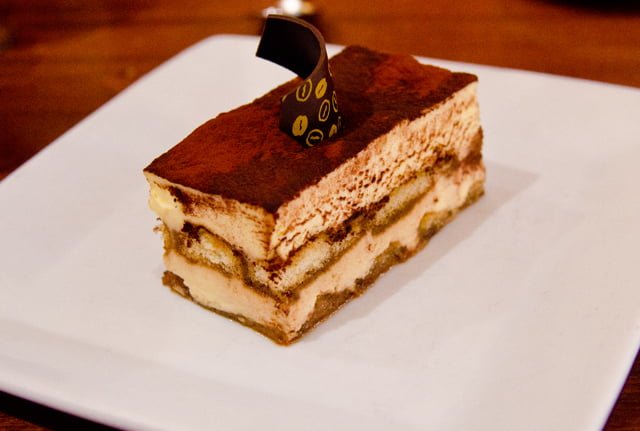 As much as possible, Tutto Italia redeemed itself with dessert. I ordered the Mocha Tiramisu and Sarah ordered the Ricotta di Pecora con Insalata di Fragole e Miele ai Fiori (I think). Try to say that ten times fast. Unfortunately, I can’t really speak to her dessert (pictured below), as she consumed it so fast that I didn’t have a chance to try it…or, perhaps it’s because I refused to share my own!

Until visiting Paris, the tiramisu I had at Tutto Italia was the best I had ever consumed. It’s taste was beyond words–it was rich with a light espresso flavor, airy and a bit gooey. The best dessert I have had in World Showcase and, if memory serves me correctly, the best dessert I’ve ever had at Walt Disney World. Sarah similarly gushed over her dessert. The downside: the desserts cost $22 total. A bit expensive, but arguably worth it. 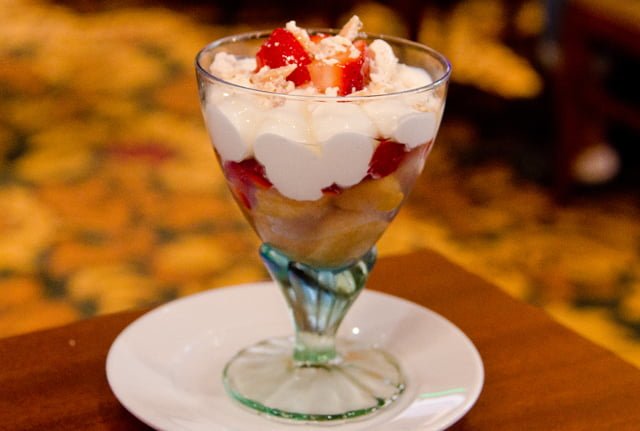 We booked Tutto Italia because it’s one of the overall most expensive one-credit restaurants on the Disney Dining Plan (clearly this status is accomplished through its expensive appetizers and desserts), and we were engaging in a little experiment in value maximization on the Deluxe Disney Dining Plan. In retrospect, we should have looked at the menus when booking, as we would have been content eating here later and paying out of pocket for something cheaper. Live and learn, I guess. 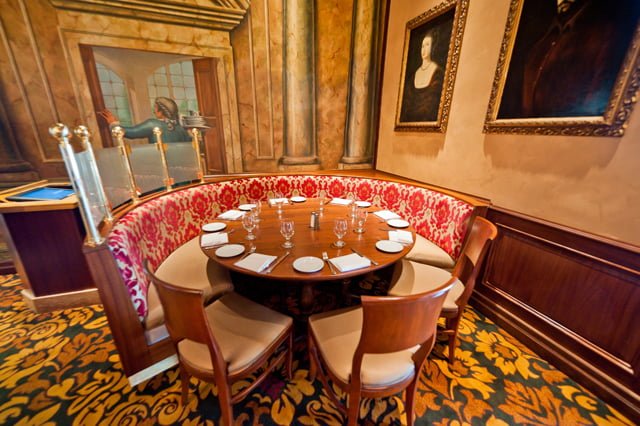 This also demonstrates one of the problems I have with the Disney Dining Plan: I am very frugal so I always force myself to look at more expensive items on the menu to make it worth my money. For us, there is no benefit in purchasing the Disney Dining Plan to prepay or to budget. The only reason we ever use it is to save money, so we make a point of only using it when we’re going to be eating at cost-effective restaurants on the Plan. Usually, this is not a big problem as I naturally gravitate towards the more expensive items on the menu. At Tutto Italia, I naturally gravitated towards the cheaper items, and had we skipped appetizers and ordered what we actually wanted, the meal wouldn’t have been all that expensive. 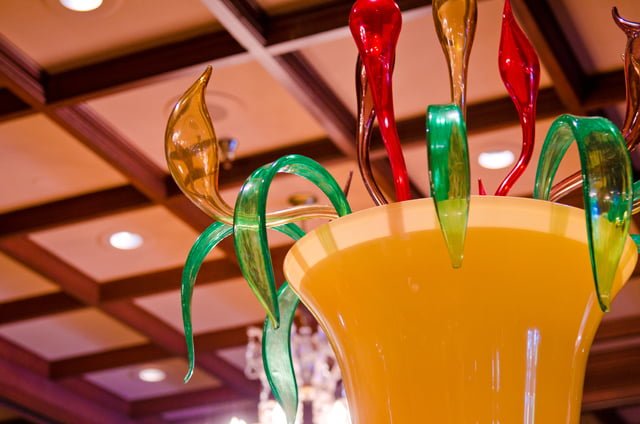 Overall, Tutto Italia was decent, but it’s another restaurant with prices that I just couldn’t justify for its pricier items were we paying out of pocket. It seems to be another divisive restaurant, but we weren’t quite so polarized on it. It was decidedly “meh.” The desserts were great and the appetizers were good, but the entrees were so-so and fairly bland. Most of its fans seem to be Dining Plan users, and it offers great “value” on the Dining Plan, which could explain some of its popularity. We’re fans of Italian cuisine, and Tutto just didn’t deliver with the flavor we expect from good Italian food. If we weren’t on the Dining Plan, we would have ordered much cheaper sandwiches that looked pretty food. If we paid out of pocket, and if we ordered those sandwiches, and if they been as tasty as they looked, you might be reading a much more glowing review. But that’s a lot of “ifs.” The point is that you may like Tutto Italia a whole lot more than us based upon what you order for entrees and whether you perceive it as better value. But we can only review the experience we had. Consequently, Tutto Italia ranks as one of Walt Disney World’s mediocre dining options, and certainly not something we’ll give much thought to next time we’re in World Showcase.

Do you agree with us that Tutto Italia is overpriced and overrated? Planning on going? Share your thoughts in the comments!