The Surf Pool at Typhoon Lagoon is one of the water park’s coolest features, and also one of its most dangerous (cue overly dramatic music). Actually, the pool is quite safe, it’s just that many guests don’t quite understand it or are not properly prepared for it. That might seem odd. After all, it’s just a wave pool. What’s there to know? You walk out into the Surf Pool, waves happen, you have fun for a while, and then leave. If that’s what you’re thinking, you might have a point…

Then again, this is the blog with a comprehensive Refillable Mug FAQ, so we’ve already demonstrated that we devote too much text to simple topics. Plus, we’ve finally dug out of winter in the Midwest, and I have summer fever so it seemed like a fun topic to cover today. Before we get into the tips, let’s get acquainted with the Typhoon Lagoon Surf Pool.

For those unfamiliar with it, Typhoon Lagoon’s Surf Pool is one of the largest inland wave pools in the world. It’s approximately 2.5 acres in size with 3 million gallons of water (80,000 gallons are used for each wave). The Typhoon Lagoon Surf Pool uses a machine to generate an approximately 6-foot tall wave every 90 seconds, with periods of calm between the waves.

When the wave is released, you can hear the collective shriek of guests in the Surf Pool up to 37 miles away (or on the other side of the park…we’re guestimating as our data here is insufficient). It’s so loud that you’d think Jaws had appeared in the pool, not just a large wave. The Surf Pool features 90 consecutive minutes of these 6-foot waves spaced 90 seconds apart, followed by 30 minutes of  bobbing waves and calmer water. From the wave pool, you can see the Miss Tilly’s (the boat stuck atop Mount Mayday) smokestack “erupt” with water every half hour as its foghorn sounds. 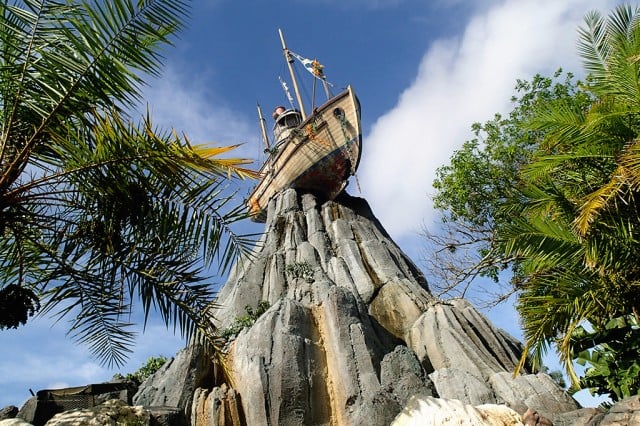 In fairness to the shriekers, the Typhoon Lagoon Surf Pool’s waves are pretty intense. With many Disney-related things, you assume a certain tameness. That’s perhaps why people underestimate the Typhoon Lagoon Surf Pool. Because of this, we highly recommend securely attaching your sunglasses, underwater camera, and whatever other trinkets you take into the Surf Pool, or you’re likely to lose them.

The name Surf Pool is fitting, because you could actually surf on these waves. Quite literally, as prior to park hours opening on select mornings, Typhoon Lagoon offers Surf School lessons ($165 per person)! On other mornings, the water park can be rented out for private surfing, with 100 waves over the course of the morning. Disney has more details about these opportunities here. 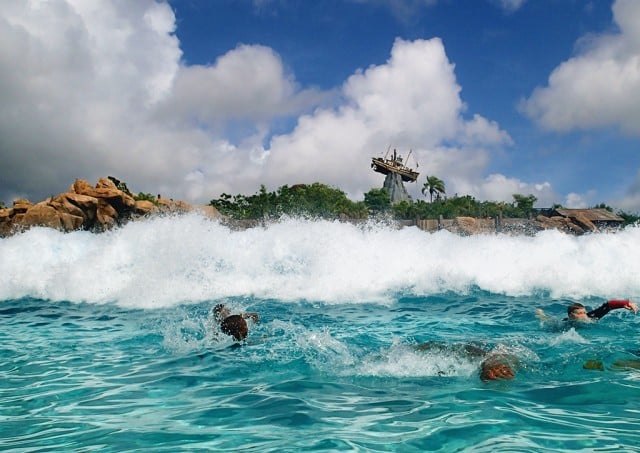 In terms of tips, the big thing about Typhoon Lagoon is it’s floor. If you Google “Typhoon Lagoon Surf Pool Injuries,” you’ll find tons of results, and debate online as to whether the Surf Pool floor is damaged, defective, or just flat out a bad idea. This is because the surface of the pool bottom has a textured, almost abrasive surface. Since the waves are quite strong, many guests in shallower water who are standing on the pool floor are knocked over by the waves and scratched a little by the floor. Even if you’re not knocked over, the wave can push you around enough that the floor can scratch up your feet. The reason for this abrasive floor is so that guests don’t slip in the Surf Pool, and hit their heads causing worse injuries. Obviously, that would be worse than some light scratches, so the abrasive floor is a necessity–the lesser of two evils, in a way. It’s really not that bad, but it can be an issue for some guests.

We have a few tips that will help you combat or eliminate this problem. The first is recommended for strong swimmers, and that’s swimming out into the deepest water and trying to “swim” the wave as it approaches you. Out at this depth, you really have no contact with the floor, and in between waves, you’re just treading water. The other main benefit to this is that it mostly gets you away from other guests, about 75% of whom are concentrated in the shallowest 25% of the pool. After having my knees and feet scrapped up a few years ago, this became my new strategy, and I haven’t had any scrape-ups since. Treading water can be a hassle, but I’ll take it and no injuries. Not being shoulder to shoulder with throngs of other guests, some of whom might be treating it as Walt Disney World’s largest bath tub, is just an added bonus. 😉

For some odd reason, I decided to take video of being hit by the wave in the Typhoon Lagoon Surf Pool, so you can get an idea of how intense it is here (check out our Underwater Camera Buying Guide for tips on waterproof camera options for using at Typhoon Lagoon):

If that’s too deep of water for you, we highly recommend water shoes. It is very wise to bring quality water shoes. These are allowed at Typhoon Lagoon, and are helpful in a lot of ways. In terms of the Surf Pool, they prevent your feet from getting scratched up and give you better traction so you can stand tall against the waves. Outside of the wave pool, they protect your feet from the scorching pavement in the water parks and also from the dirty restroom floors. (Seriously, don’t go to the Disney water parks without water shoes.) Another option is standing in shallow water, and ducking under the water when the wave starts so you aren’t hit by the crest of the waves. This method is far from fool-proof, but if you aren’t a strong swimmer and don’t have water shoes, it’s the best bet short of not going into the Surf Pool for very long.

As far as when to use the Surf Pool, you’ll likely want to go in the middle of the day after doing the slides and other attractions you want to do. We recommend after lunch, which is the busiest time in the pool, but the Surf Pool can also accommodate a lot of people. You’ll definitely want to do the Surf Pool during one of the 90 minute cycles of 6-foot waves. The bobbing period is dull (and is better at Blizzard Beach where you can take inner tubes into the bobbing wave pool), anyway. It’s difficult to time when will be giant waves and when will be bobbing ones, but the first cycle is supposed to start at park opening, so–if all goes according to schedule–the second cycle of big waves starts at 11 am and the third cycle starts at 1 pm.

What do you think of the Surf Pool at Typhoon Lagoon? Ever been injured in it? Have any additional tips? Share your thoughts or questions below in the comments!