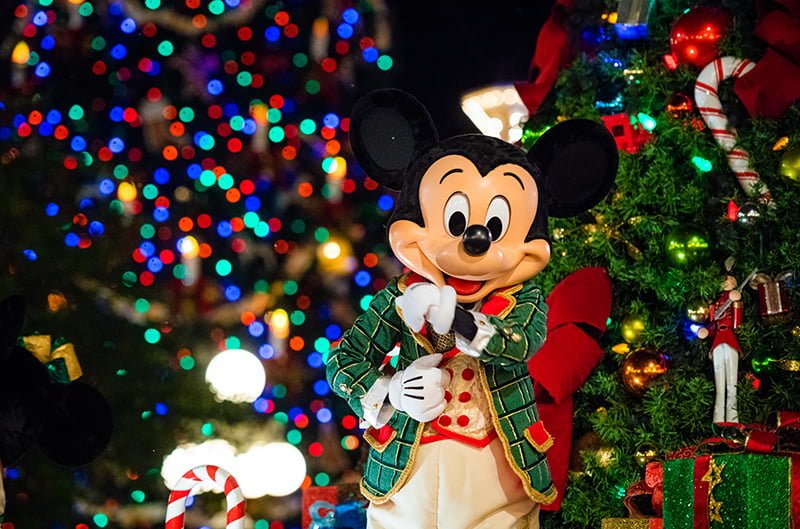 Disney Very Merriest After Hours will take place on 24 select nights November 8, 2021 through December 21, 2021 from 9 p.m. to 1 a.m. This year’s holiday celebration will coincide with the Walt Disney World 50th Anniversary, “The World’s Most Magical Celebration.” (See our Guide to Walt Disney World’s 50th Anniversary for everything you need to know about what’s happening during the festivities.)

Tickets for the 4-hour Disney Very Merriest After Hours event grant guests admission to Magic Kingdom starting at 7 p.m. That mix-in with regular day guests gives Christmas party attendees more time to enjoy attractions and more in Magic Kingdom. Additionally, both day guests and party attendees will be able to enjoy the brand-new fireworks spectacular Disney Enchantment and watch as projections transformation Cinderella Castle into a Beacon of Magic. Here’s everything you need to know about Disney Very Merriest After Hours…

As previously announced in the original “Halfway to the Holidays” reveal, Disney Very Merriest After Hours will include the nighttime spectacular Minnie’s Wonderful Christmastime Fireworks. That’s the still-new(ish) nighttime spectacular that debuted during the last year of Mickey’s Very Merry Christmas Party, replacing Holiday Wishes. 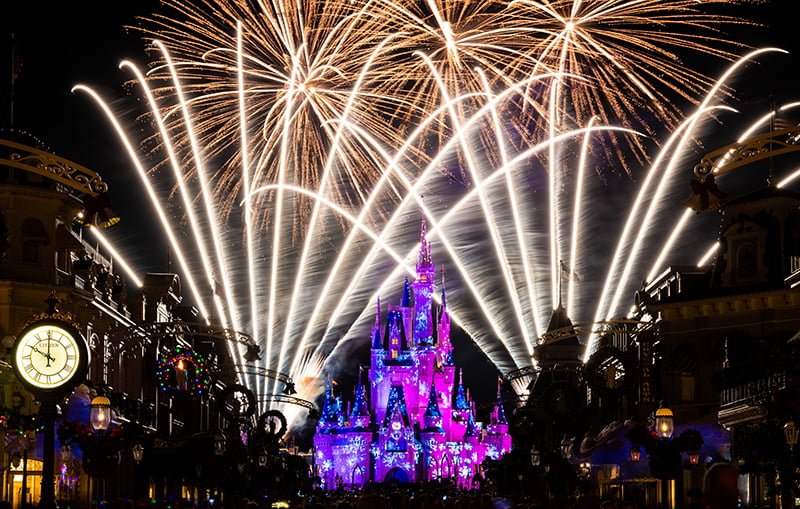 Fireworks are not all that’s in store during this limited-capacity event. Here are additional details of what you can experience during Disney Very Merriest After Hours: 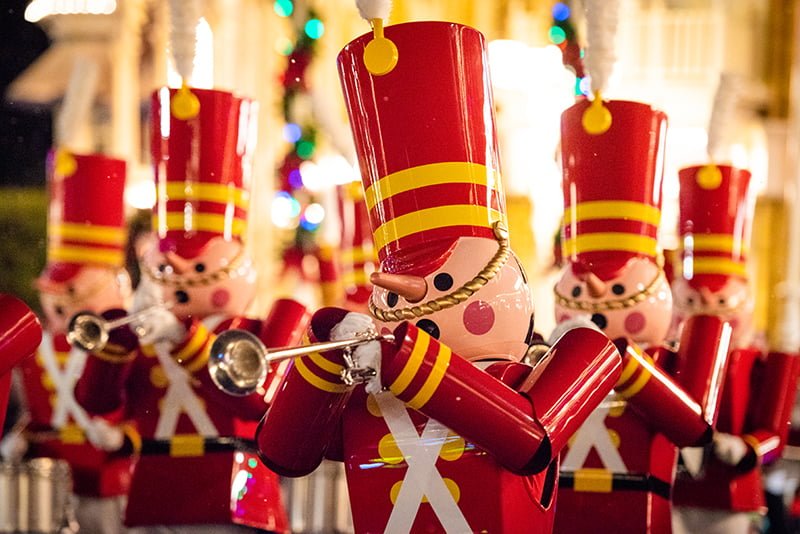 Most of those details are not new, but there is one big bombshell not previously announced: the special holiday-themed parade “Mickey’s Once Upon a Christmastime Parade” will be shown during Disney Very Merriest After Hours. Mickey Mouse and Minnie Mouse will be joined by pals from Frozen, Santa Claus, and many other favorite Disney characters including the very popular Toy Soldiers.

This is a full parade–the same one from Mickey’s Very Merry Christmas Party–and not a cavalcade. This is a fairly significant milestone, as it marks the first time (barring any other announcements) a full parade will roll down Main Street since March of last year. 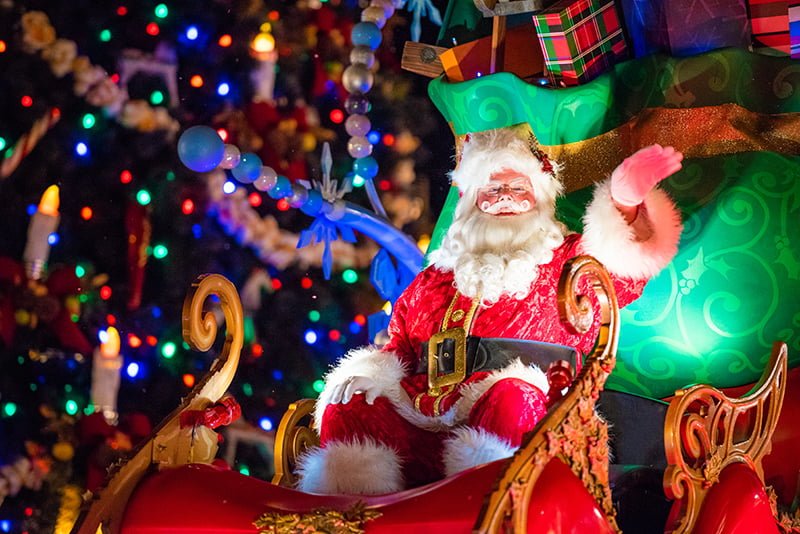 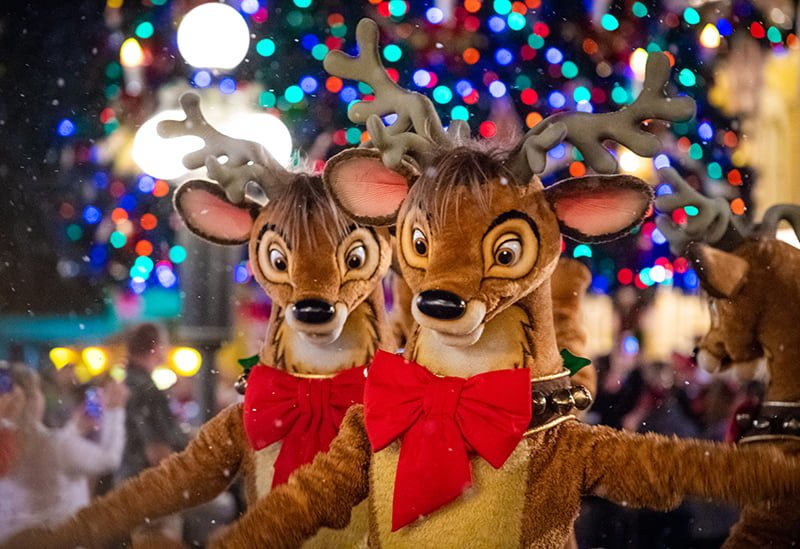 Of course, all of this comes at a cost. Tickets range from $169 to $229 plus tax for select November and December 2021 nights and $249 (!!!) plus tax on December 19 & 21.  Annual Passholders and Disney Vacation Club Members can take advantage of a $10 discount on select event dates in November.

These dated event tickets do not require an additional day theme park ticket or Disney Park Pass theme park reservation. Tickets are available for purchase online or by calling 407-939-7947.

Tickets have now been on sale for over one month, and not a single date has sold out for Disney Very Merriest After Hours. Most dates are still two months or more away, so that could obviously change and we’d recommend not reading too much into it.

However, it is worth pointing out that many dates for Disney After Hours Boo Bash sold out within a couple of weeks for many dates. Sales are already slower for the Christmas Party, despite it occurring during a far busier time of year. This is unquestionably due to the exorbitant ticket pricing.

Speaking of which, here’s a chart with ticket prices for each Disney Very Merriest After Hours date with discounts factored in: 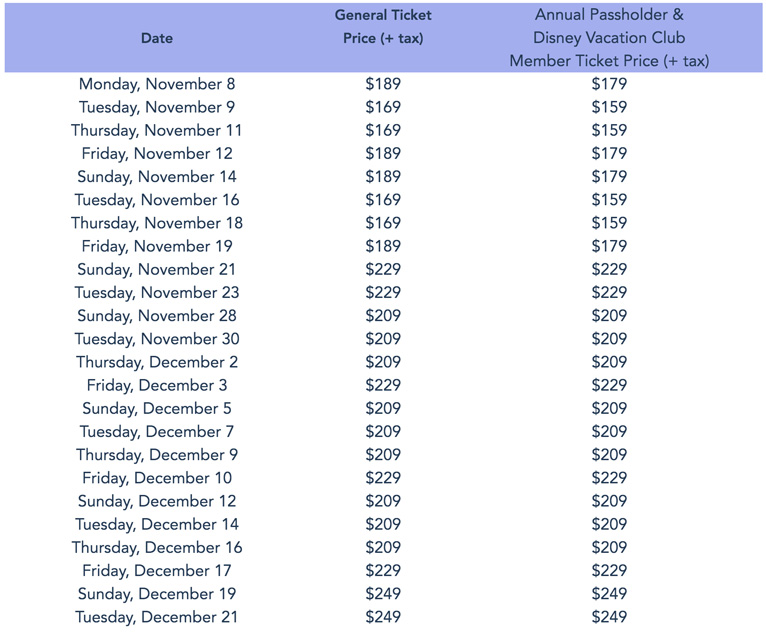 In terms of commentary, there are a few notable things worth discussing. First, the return of Mickey’s Once Upon a Christmastime Parade. You might recall from 2021 Christmas at Walt Disney World Dates & Details: What’s Coming & Cancelled that no cavalcades or parades were announced back when holiday season details were first released.

We speculated at the time that more announcements were likely coming, concerning things like the parade, Candlelight Processional, and other entertainment that it was still “too early” to announce. It does come as a surprise that Mickey’s Once Upon a Christmastime Parade is happening during the event. 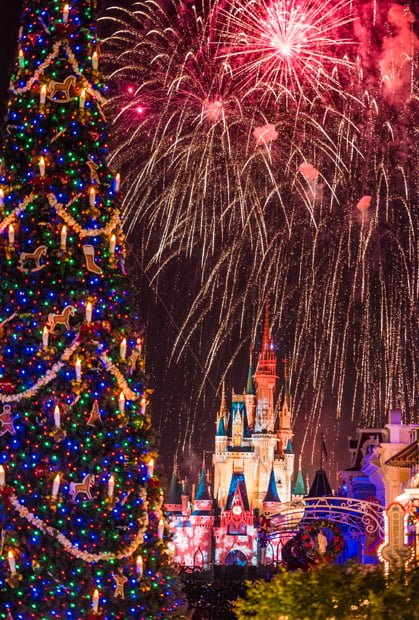 Second, the price. This is significantly more expensive than Disney After Hours Boo Bash. It costing more is not a huge surprise–Mickey’s Very Merry Christmas Party always averages higher prices than Mickey’s Not So Scary Halloween Party.

However, it’s never by this much. Starting prices at $169 per night and going up to $250 is not something I would’ve predicted. That’s a big yikes from me. I did not expect this to cross the $200 threshold, let alone smash right on through to $250. 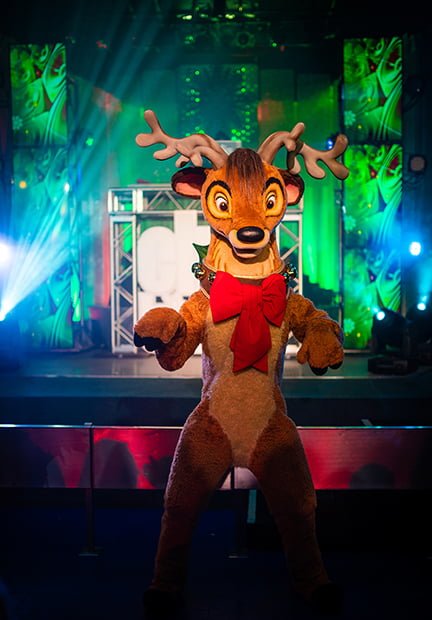 Moreover, there isn’t a single Very Merriest After Hours night under $200 in all of December 2021. The last night of the $169 or $189 prices is November 19, 2021. These prices are astronomical, even as an “I know it’s not worth it but I want to do it anyway” splurge. I say all of this as someone who more or less “defended” the Boo Bash pricing as being on par with Villains After Hours.

Our hope with the slow early ticket sales for Disney Very Merriest After Hours is that Walt Disney World has exceeded the maximum price ceiling most guests are willing to pay. While the company is unlikely to remedy the overpricing issue this year, that would be a positive development for years to come. Pricing has gotten out of hand with these parties in the last few years, but they continue to sell out–the only way anything changes is if people stop buying overpriced tickets. 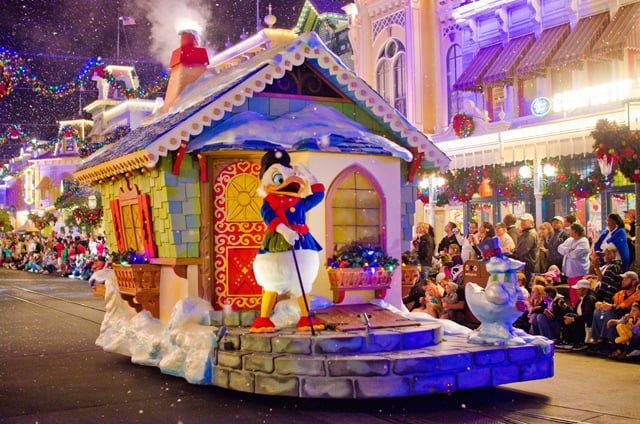 The main difference between Boo Bash and Very Merriest After Hours is that Walt Disney World has added fireworks, a full parade, and attraction overlays to the event. Additionally, Disney Very Merriest After Hours is an hour longer. It’s thus likely that Walt Disney World views those as sufficient “value adds” to justify a significantly higher price point.

In my view, the problem with that reasoning is Very Merriest is either an entertainment-centric Christmas party or a limited-capacity After Hours event with low wait times. While it’s promising both, it cannot deliver both simultaneously to guests. They have to choose one or the other given the practical realities of physics, the space-time continuum, or whatever. 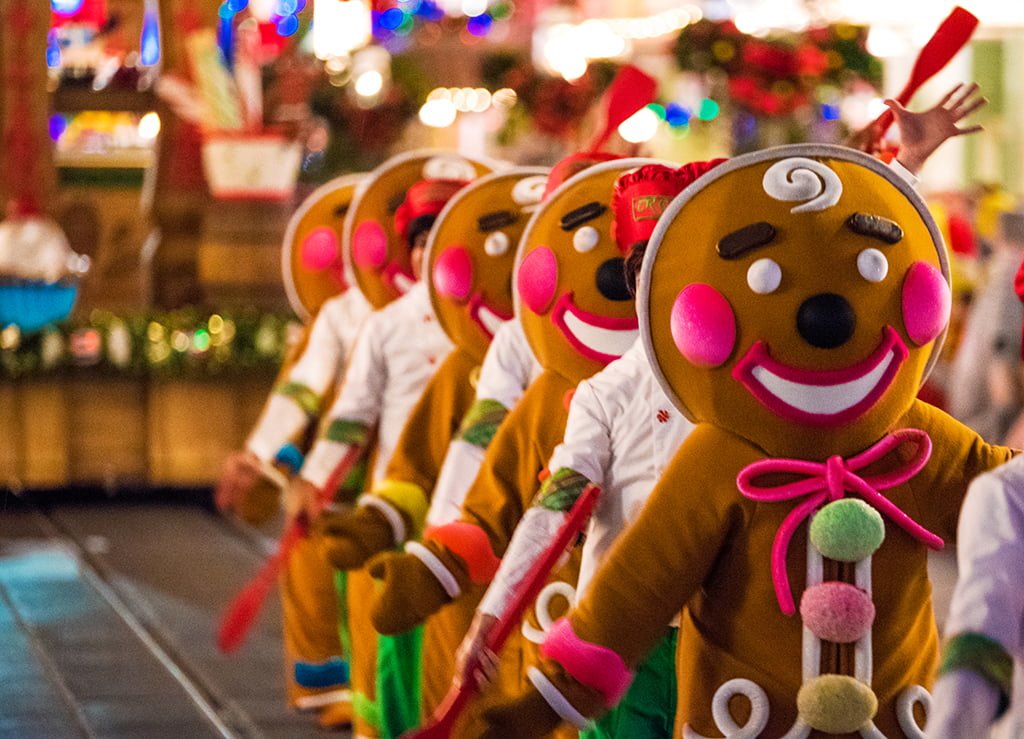 People either can take full advantage of the entertainment or the short wait times, but not both. Four hours might seem like a lot of time, but it goes by fast. Disney Very Merriest After Hours isn’t long enough to enjoy both a lot of attractions and the fireworks and parade. As we discussed in our Disney After Hours Boo Bash Photo Report, we found it difficult to do both and recommended ignoring the cavalcades because they were such a time waster.

That was the case with virtually no crowds along the parade route and it being easy to snag a last minute spot to see the cavalcades. I’d hazard a guess that won’t be true with Mickey’s Once Upon a Christmastime Parade, which is a bigger draw–guests will camp out for it. 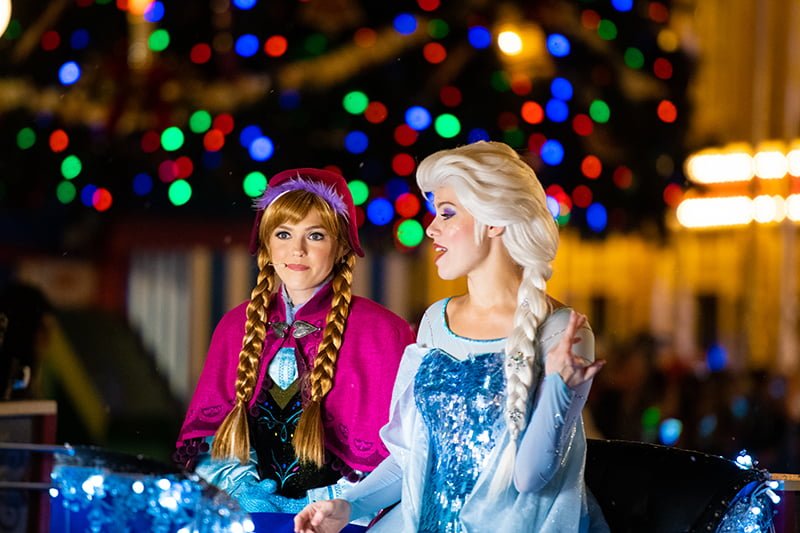 In a way, this feels like Walt Disney World trying to offer Mickey’s Very Merry Christmas Party…without actually bringing it back. Maybe they think this is the “best of both worlds,” but it doesn’t feel like it. Not only is it considerably more expensive than MVMCP (which cost $100 to $139 in its last year), but the start time is several hours later.

For those wondering why Walt Disney World would do that, it’s because the last three months of the year are going to be bonkers. As we’ve previously stated, running an After Hours event in November and December makes more sense than Mickey’s Very Merry Christmas Party. Normal park hours will need to be much longer due to attendance forecasts during the kick-off months of Walt Disney World’s 50th Anniversary, it’s simply not feasible to close Magic Kingdom early so many nights of the week. Even in a normal year closing Magic Kingdom at 6 pm several nights per week for Mickey’s Very Merry Christmas Party creates a logistical nightmare. As you can probably imagine, most guests don’t want to spend their day in Magic Kingdom during the holiday season if they won’t be allowed in the park after sunset.

The event hours here suggest that Walt Disney World agrees with our perspective–that it’s simply not feasible from an operational perspective to close that early in November and December. However, the solution doesn’t make a ton of sense either. Very Merriest After Hours starting at 9 pm and running until 1 am is going to automatically rule out a ton of families who would otherwise love to see the parade and fireworks. Many of those who aren’t eliminated by virtue of the late hours will find the price points to be a total non-starter.

Ultimately, the entertainment and other details announced for Disney Very Merriest After Hours feels very much like an internal “compromise” between competing factions in Walt Disney World management. Maybe some leaders or divisions wanted an After Hours event and some wanted Mickey’s Very Merry Christmas Party–so this is what we got. A combination of the two events and, it would seem, the cost of the two added together for one outrageously priced evening.

While I am very heartened by the return of holiday fireworks and a full parade, the numbers just don’t add up. It would’ve made more sense to rename the party and remove the After Hours branding, increase the capacity cap, and price this more competitively. With a few weeks until tickets go on sale, perhaps we’ll still see that change happen. It wouldn’t be the first time that Disney pivots with this event or other modifications due to guest feedback. 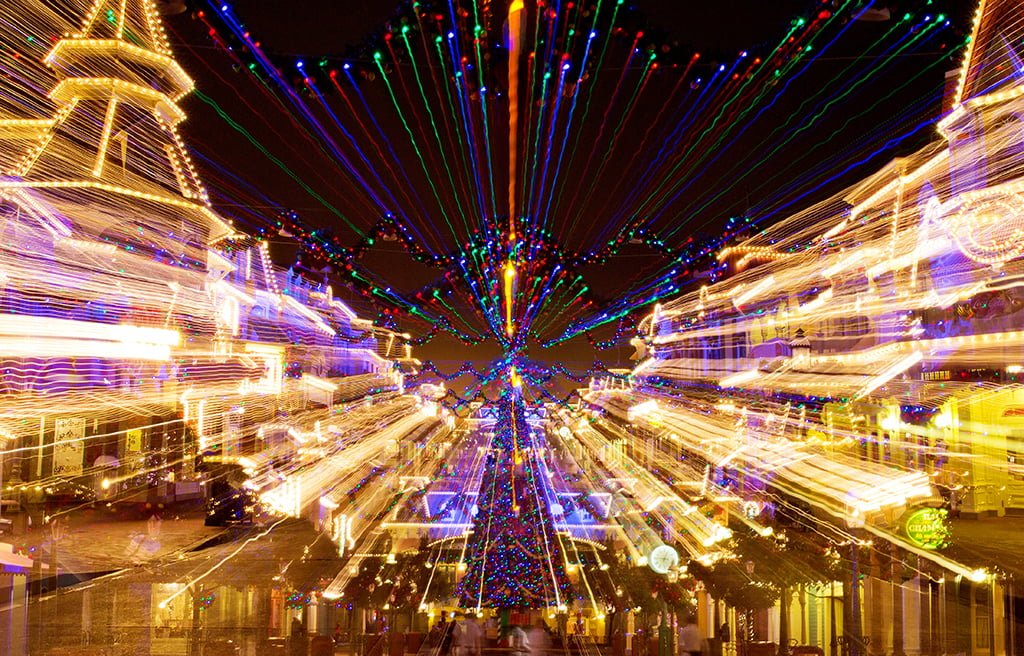 Of course, that assumes guest feedback to this will be negative. Perhaps it won’t. Regardless, it’ll be interesting to see how well Disney Very Merriest After Hours sells. Many dates for Disney After Hours Boo Bash sold out quickly, and this offers a significantly better lineup than that, at least in theory.

With that said, the price increase for Disney Very Merriest After Hours seems too steep to me. While it has sold well, the audience was already narrow for Disney After Hours Boo Bash. I suspect many of the guests who reluctantly paid more than they would’ve liked for that will sit out Very Merriest After Hours due to that significant price jump–especially the dates that cross that $200 threshold. Then again, maybe I’m underestimating the number of guests with disposable income or willing to splurge around Christmas. (‘Tis the season!)

What are your thoughts about all of this? Is Disney Very Merriest After Hours fairly priced or way too high? Do you think this is a “compromise” between an After Hours event and Mickey’s Very Merry Christmas Party this year? Will your family be buying or sitting this Christmas-themed event out? Do you agree or disagree with our perspective on this? Are you disappointed that Mickey’s Very Merry Christmas Party won’t be happening, or is Disney Very Merriest After Hours a superior (or at least sufficient) alternative for you? Any questions we can help you answer? Hearing your feedback—even when you disagree with us—is both interesting to us and helpful to other readers, so please share your thoughts below in the comments!