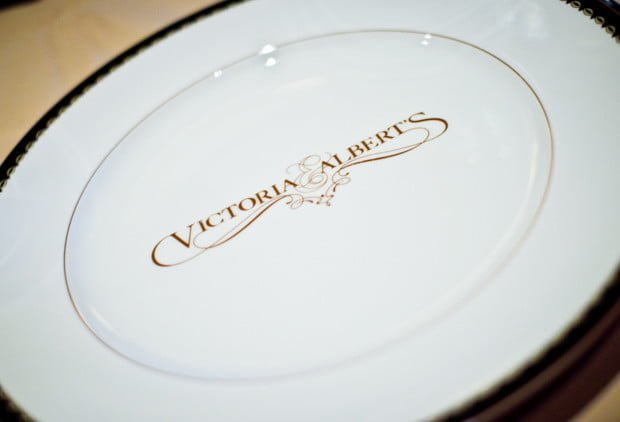 Victoria & Albert’s is a AAA 5-Diamond award winning restaurant in Grand Floridian Resort at Walt Disney World that offers a unique fine-dining menu of contemporary American cuisine. It has won numerous awards over the years; in 2017, it was once again named the #2 restaurant in the United States by TripAdvisor.

Suffice to say, this is by far the best restaurant at Walt Disney World. It’s not even close. Victoria & Albert’s is also the most expensive. (Again, it’s not even close.) Additionally, it does not participate in the Disney Dining Plan, nor does it accept the Tables in Wonderland card.

Although we recommend reading the rest of this review if you’re considering dining at Victoria & Albert’s, no review really is necessary. Victoria & Albert’s is, hands down, the best dining experience at Walt Disney World. It’s well worth the expensive price, and actually is not overpriced when compared to comparable “real world” restaurants…

Sarah and I have had some nice meals at restaurants comparable to Victoria & Albert’s, and usually they aren’t my thing. Although I enjoy fine dining, I get impatient when eating several course marathon meals that take several hours, and I feel out of place at the lavish restaurants where everyone else is seemingly aged 60-80. We have received poor service at some such places, I feel, because the staff felt we “didn’t belong” due to our age. Consequently, on the rare occasions that we dine out, we skew towards more moderate-tier restaurants.

Moderation is not a word in Victoria’s (or Albert’s) vocabulary. As we ascended up the stairs and the polished mahogany of the grand doors came into view, my stomach became unsettled, as I wondered if we had just forked down a substantial amount of money for what might only amount to a few hours of discomfort. I curled my Mickey Mouse camera strap into my hand as we approached the check-in stand, not wanting to appear like an “outsider.”

My fears would quickly be allayed. We had two maids (waitresses and waiters go by maids and butlers at V&A) who were both incredibly friendly and personable. Immediately, they offered to bring a stool for our cameras. The rest of the experience was only uphill. Our meal and the options were explained to us, and we were given a wine list. 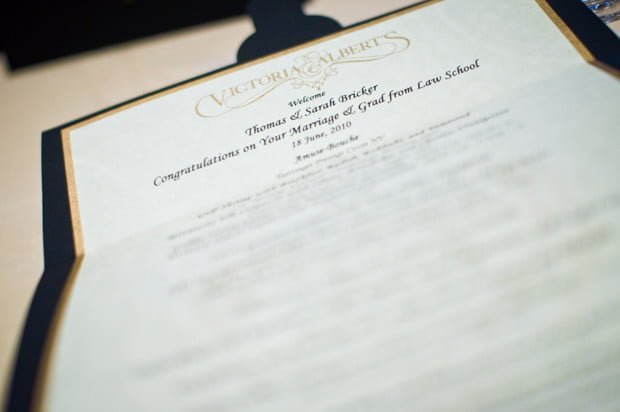 Initially, I presumed it was a catalog from which to purchase a new car. The names of the cars didn’t register (they were mostly French and older models), but the prices certainly suggested that it was a car catalog. Upon realizing it was a fine list, and all but the cheapest wines were out of the question, we were given the menu for the meal.

It should be noted that the menu for Victoria & Albert’s changes regularly, and we dined here several years ago for our honeymoon. Our “meal report” follows, but probably offers little value if you’re trying to decide what to order. It’s highly unlikely that any of these items will be on the menu for your meal. 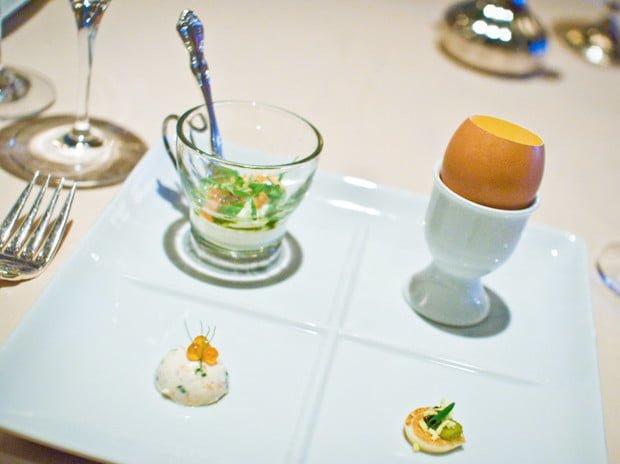 After ordering, one of our maids brought out palette stimulators, compliments of the chef. Upon my first spoonful of the egg, I knew I was in for the most amazing meal of my life. Up until that moment in my life, this was the best thing I had ever tasted.

I don’t think my palette is refined enough to describe all of the tastes (even if it were, I couldn’t remember them so long afterward), but it was amazing. The other three portions were incredible, as well. 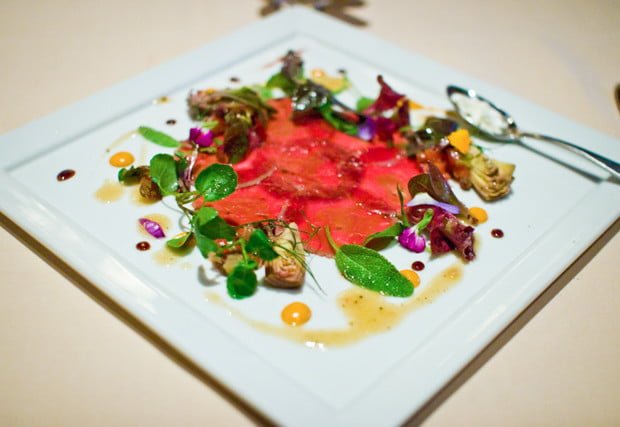 My first course was Minnesota Elk Carpaccio. After the first course, I was incredibly excited for this, as I love wild game.

The elk was delicious with excellent presentation, but it left me wishing for a little more. It was so thinly sliced that it was almost difficult to properly taste it (at least I thought). Still, wonderful. 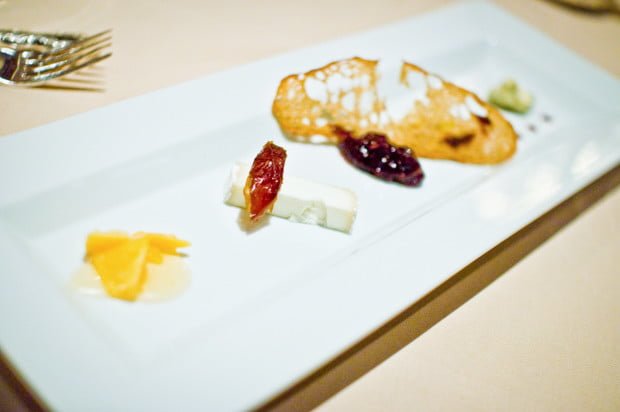 For her first course, we can’t quite remember what Sarah had. She was equally impressed with her course. 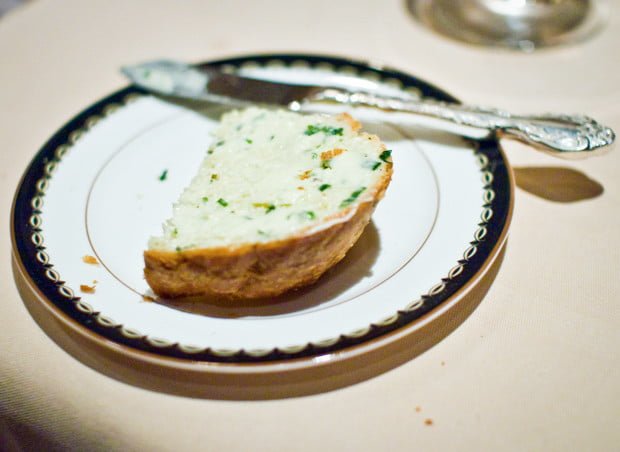 After this, the maids served us bread. This was some of the best bread and butter I had ever had. The butter had garlic in it that, while probably not massaged daily, was rich and smooth beyond belief. The bread itself was delicious, too. 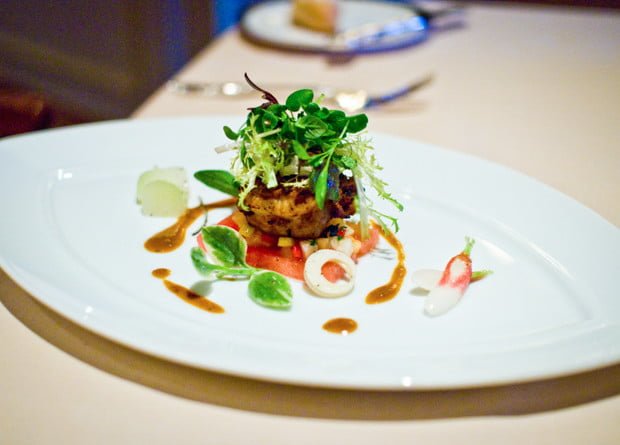 For the second course, we both got the Marinated King Salmon; it was sweet and tender. Probably the best salmon I’ve ever had. Very delicious. 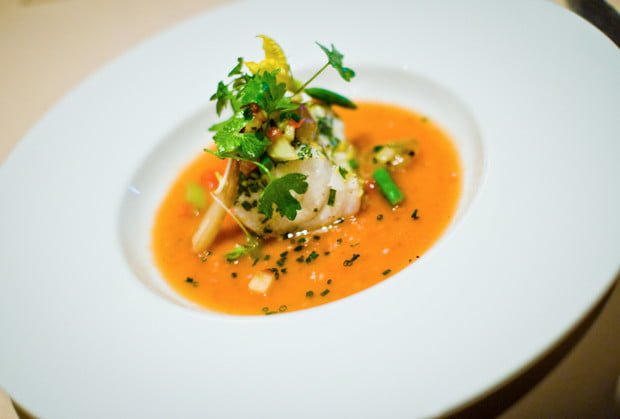 Throughout the meal, the maids were incredibly attentive and personable. Truly the friendliest and most attentive service we’ve had at any restaurant. 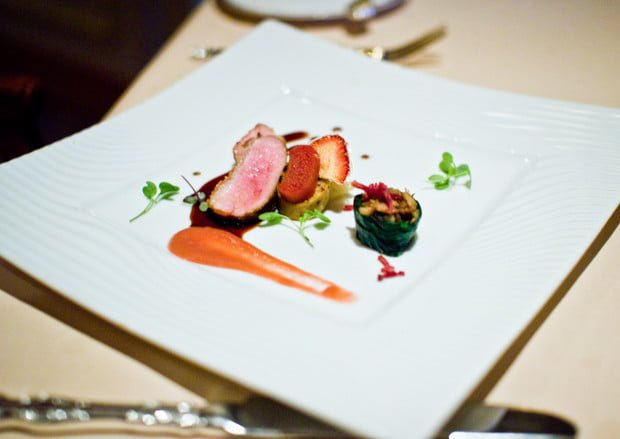 Sarah had the Duck Breast, Duck Sausage and Confit, which I almost ordered as well. The sausage, especially, was delicious, and although I’m not sure what confit preparation entails, it sure made the plate delicious. 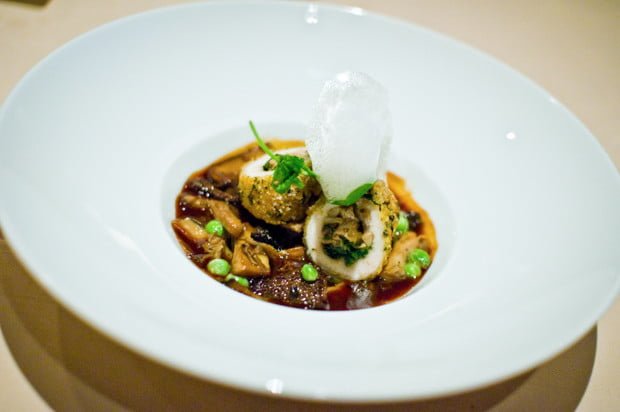 My rationale for not ordering the duck was that our meals were already going to shape up very similarly, and the Poulet Rouge with Mushroom-Truffle Ragout intrigued me. Truth be told, I had no idea what this was when I ordered it, and the maid’s explanation didn’t really elucidate things for me, but I decided to go for it anyway.

I absolutely love mushrooms, and I figured it would be good. It was rich, flavorful, and incredibly excellent. Some of the best mushrooms I’ve ever had, and this is coming from an expert Northern Michigan Morel hunter. 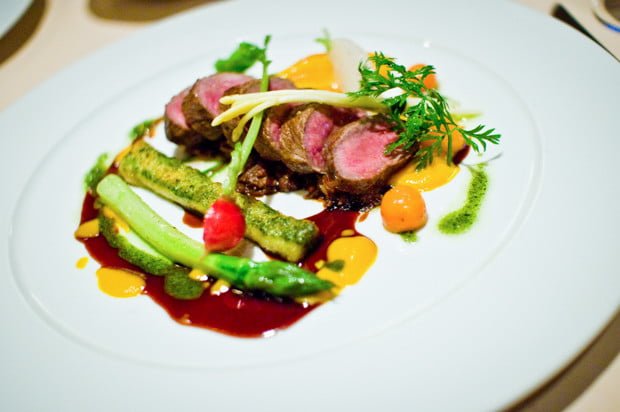 Next was the main course. We both opted for the Niman Ranch Lamb. It was amazing. Out of this world delicious. At this point, though, it was a bit anti-climatic. Every course before it had been so amazing that we fully expected the perfect main course.

It definitely delivered; cooked perfectly, nice and tender. It’s right after lunch as I write this, but even thinking about it on a full stomach makes me crave it. 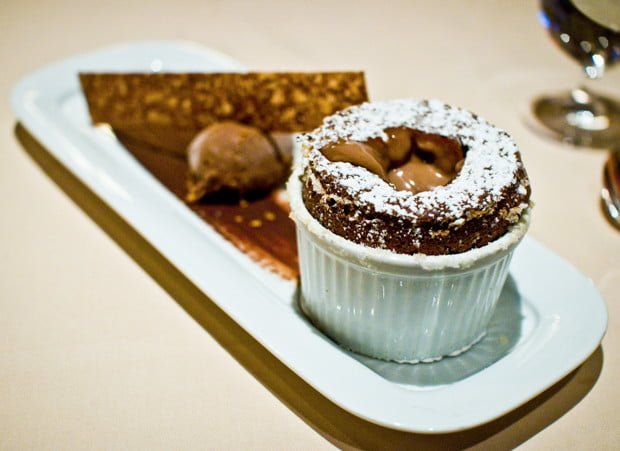 For dessert we were torn. It was really only a two horse race, but torn we were, nonetheless. 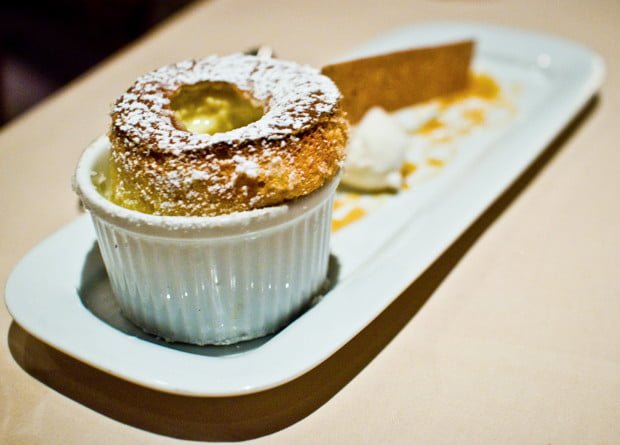 Prior to this trip, I hadn’t been a big chocolate or desserts person (much to the disappointment of my waistline, I’ve become a convert).

Hallelujah, I saw the light on this trip! I don’t even know if I could put into words the deliciousness of that dessert. Rich. Decadent. Super-awesome-fantasmic! 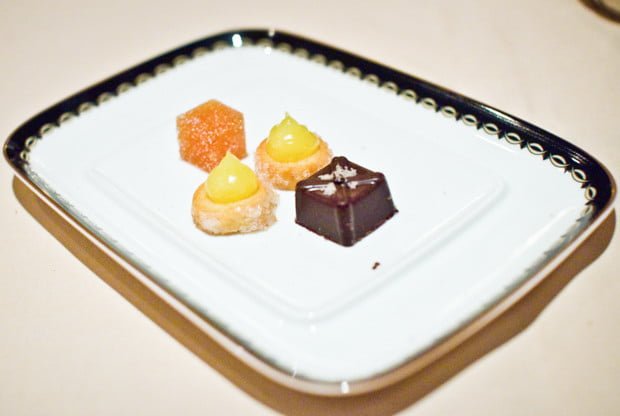 Finally, we were treated to some wonderful candies. (V&A doesn’t even skimp on the candy!) Sarah was given a rose and we were given a dessert bread to take home.

As the experience drew to a close, the maids gave us one last “course” that would prove wonderful–access to a private room in which we could take as many pictures as we wanted! The room, the Queen Victoria’s room, was set up for overflow or perhaps parties, and the bookings were very light that evening, so it was not in use. 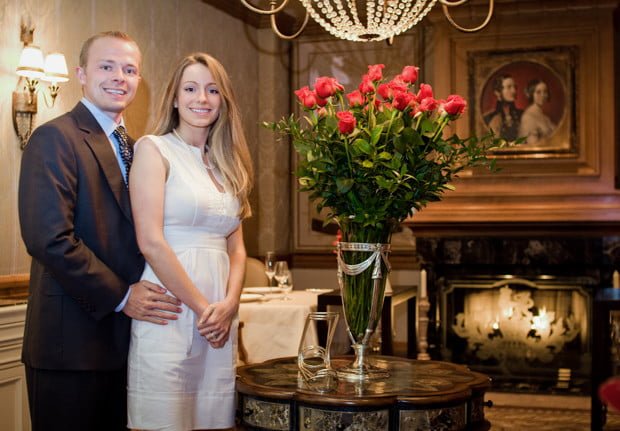 The thing I’m asked the most about Victoria & Albert’s is whether it was worth the money. Obviously if people are asking, they’re in a situation like us: value for money matters, and a meal at V&A’s there would be splurging to some degree. My advice, unequivocally, no matter what degree of splurging it may be, would be to find a special occasion to celebrate there, and go. I don’t say the ‘special occasion’ bit so you have a nice “in” to get a freebie, but rather because I think it provides a nice reason to be there, and something to “embrace” while you’re dining.

The meal is absolutely amazing, as was the service; really, I can’t say enough good things about the experience, except for the price (fixed-price cost for the regular dining room is $185 per person; wine pairings are $65 per person). That said, in terms of value, even at its high cost, I would rate Victoria & Albert’s very highly. In my mind, it’s one of the few restaurants that is not overpriced for the food and service it offers.

Simply put, this is the best restaurant at Walt Disney World by an incredibly wide margin. No matter what amount of saving it requires you to do, it’s definitely worth doing once. If it weren’t for our honeymoon, I’m not so sure I could have enjoyed it as much in our present financial circumstances; rather, I’m pretty sure I would’ve been thinking about how much it was costing and wondering why we’re doing it. In the context of a once-in-a-lifetime celebration, though, thoughts of price didn’t cross my mind once (well, besides when looking at the wine list). I cannot wait until we are financially stable enough to enjoy our next meal there.

If you’ve been to Victoria & Albert’s, did you like it? Do you think it’s the best Walt Disney World restaurant, or did it not live up to the hype for you? Planning on going? Share your thoughts in the comments!