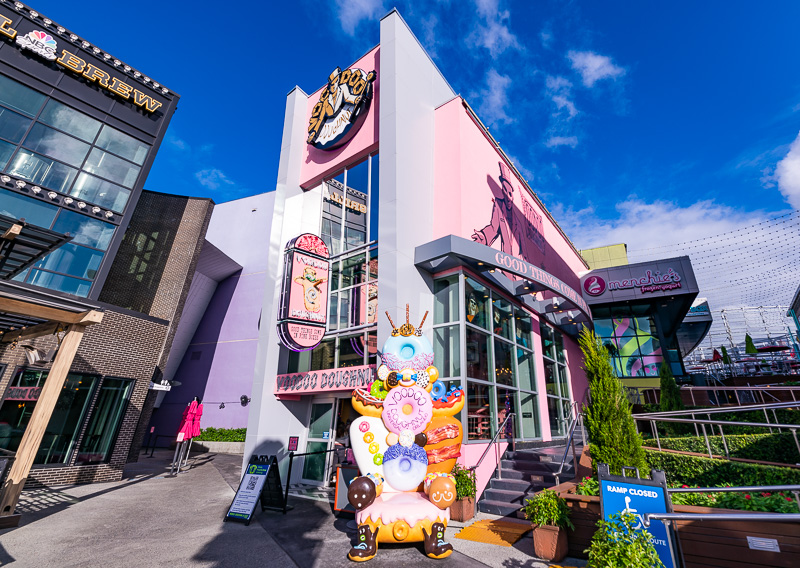 Voodoo Doughnuts is a counter service bakery serving creative and irreverent donuts at CityWalk at Universal Orlando and Hollywood, within walking distance of the parks. This dessert review compiles food photos and thoughts from a couple of our visits to the restaurant–it was originally going to be published last summer, but I held off as an excuse to visit more for “added culinary research.”

That was “necessary” because our diet has been cabbage and cauliflower-centric for the last couple of years. You’d be surprised at how many things can be infused with cauliflower or cabbage these days. Modern “innovations” like riced cauliflower allows the stuff to be hidden in pretty any dish. Even guilty pleasures like pizza can be cauliflowerized via the crust. (What kind of sick joke is that?!?)

But you’re presumably not here to read about my cabbage and cauliflower woes. However, I share it because several months of health living was all thwarted in one fell swoop with a visit to Universal Orlando. Like a phoenix rising from Arizona, I devoured a dozen Voodoo Doughnuts all by myself…

For those unfamiliar with it, Voodoo Doughnuts originally started in Oregon. The bakeshop’s founders sought to create a donut diner that “combined quality hospitality with their daring do-it-yourself brand of show business” (per the company’s story on its website).

Voodoo Doughnut’s initial pastry offerings were a mix of the classic and the unconventional, and immediately became a darling of the travel and food media thanks to the shop’s sense of show and its unique doughnut flavors. The aesthetic also inspired a variety of imitators, and helped further fuel the gourmet doughnut movement. 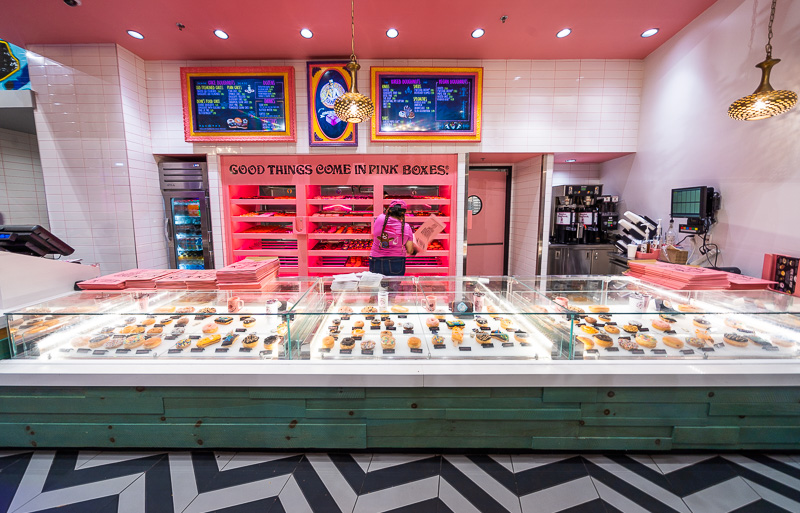 Voodoo Doughnut has since expanded beyond Portland, with nine locations in five states, including outposts in CityWalk near Universal Studios Florida and Islands of Adventure, plus in California at Universal Studios Hollywood.

Voodoo Doughnuts’ style and substance has earned it a cult-like following. The shop’s a mix of eclectic humor, eye-catching interiors, fun easter eggs, and delicious doughnuts makes it a perfect fit for theme parks. 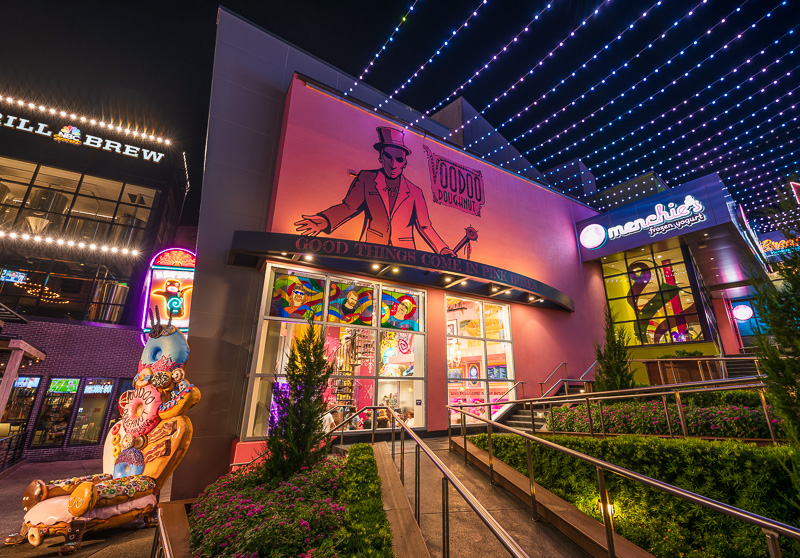 While some of the edgier aspects of Voodoo Doughnuts have been toned down (or cut from the menu, as the case may be) for Universal Orlando, it still has a hip vibe. Frankly, I’m not sure if I’m cool enough to eat at Voodoo Doughnuts. Thankfully, there is no bouncer here to stop me.

Of course, all of the photogenic trendiness in the world wouldn’t matter if the doughnuts couldn’t hold their own, so let’s dig into the menu… 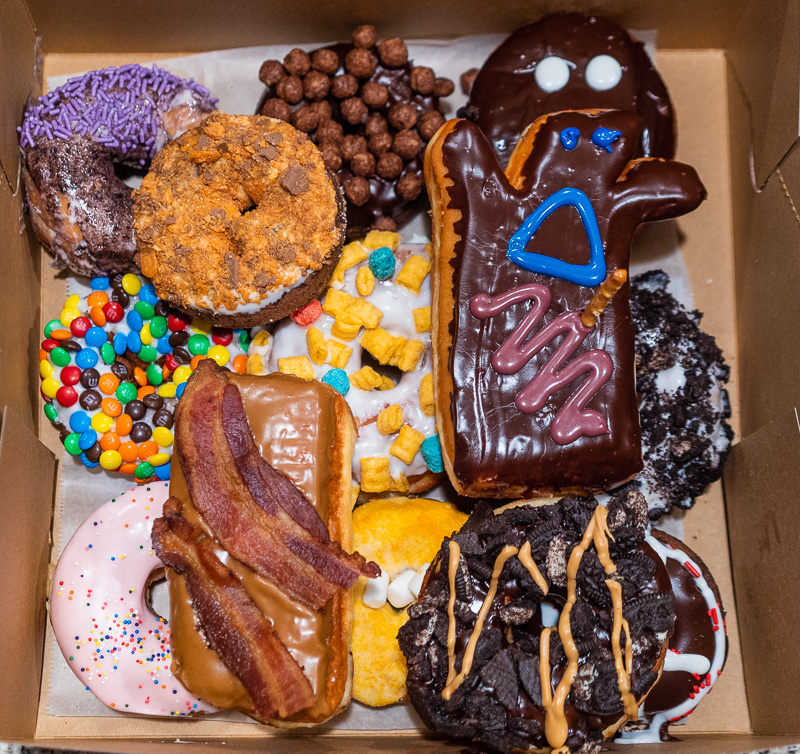 For simplicity’s sake, I ordered the Fryer Flyer Dozen–all Voodoo Doughnut’s premium pastries in one box–for the purposes of this Universal Orlando dining review. 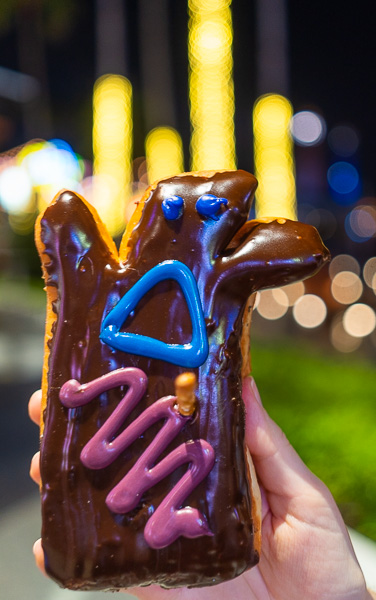 I’m not sure to what degree granular reviews of each specific doughnut will help, as each is fairly taste-specific and you’ll likely know by the menu description which ones will appeal to you.

The only relevant “tasting notes” I have to add are that the Grape Ape is surprisingly tangy (in a good way) and both the Portland Cream and Voodoo Doll demonstrate the delicious quality of the core, unblemished product. I’m a sucker for maple-bacon anything, so I loved that one–but I could feel its sweetness in my teeth. 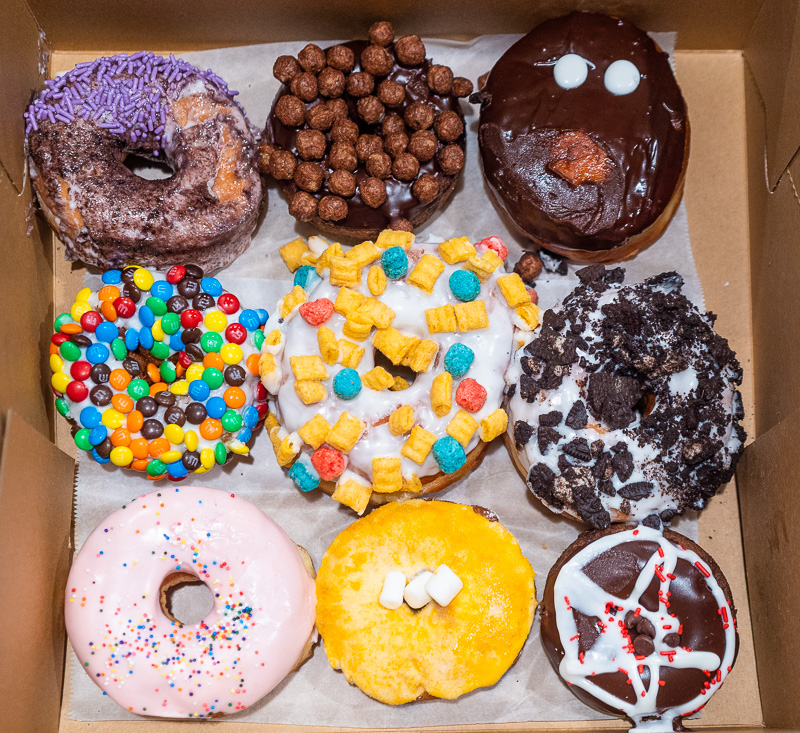 Lowlights were anything covered in breakfast cereal. I know many fans love the “Oh Captain, My Captain” but it did nothing for me. Topping a normal doughnut with an off-the-shelf kids breakfast cereal doesn’t exactly scream “gourmet doughnut” to me.

If ridiculous store-bought toppings are necessary as a crutch, it’s because the underlying product can’t stand on its own. Your mileage may vary on that, though. The same criticism could arguably be levied at the ones topped with cookie crumbles, but the end results were generally significantly better. 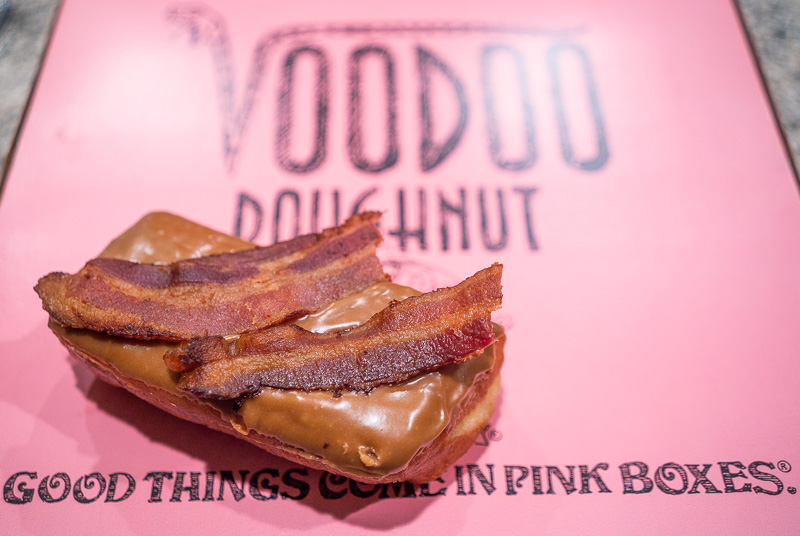 In hindsight, I wouldn’t order the Fryer Flyer Dozen again, and not just because eating an entire box of one dozen doughnuts all by myself after months of a largely sugar-free diet made me feel sick. (Who could’ve seen that coming?)

It’s more because I’d rather focus on a few extravagant highlights and round out my selections with some of the plain donuts that speak for themselves. Sometimes, it felt like the gimmicky toppings got in the way of the ‘classic cakes’ underneath, which were fundamentally pretty tasty. I also love trying whatever is new and limited edition. 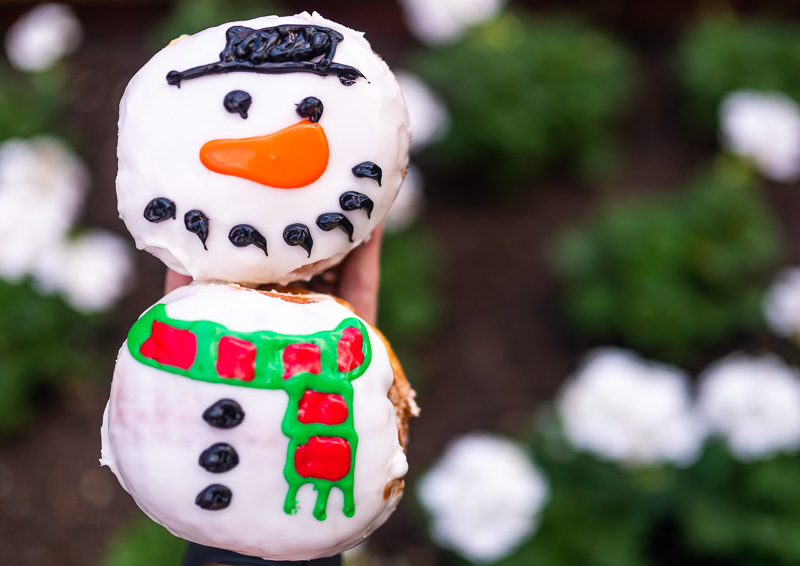 Speaking of which, we’ve since returned to Voodoo Doughnuts a few times, mostly for seasonal and anniversary doughnuts, including the Halloween Horror Nights Jack the Clown doughnut. That’s not him above–it’s the notorious Jack Frost, another horror icon.

These holiday doughnut reviews are obviously belated and probably useless now, but the important point is that Voodoo Doughnuts has crafted some unique and ambitious flavor combinations. For instance, the snowman’s head above was white chocolate mocha cream and his body was peppermint mocha. I absolutely loved the body, but thought the head was just okay. However, I appreciated that both were something different and will try whatever inventive ideas Voodoo Doughnut releases next. 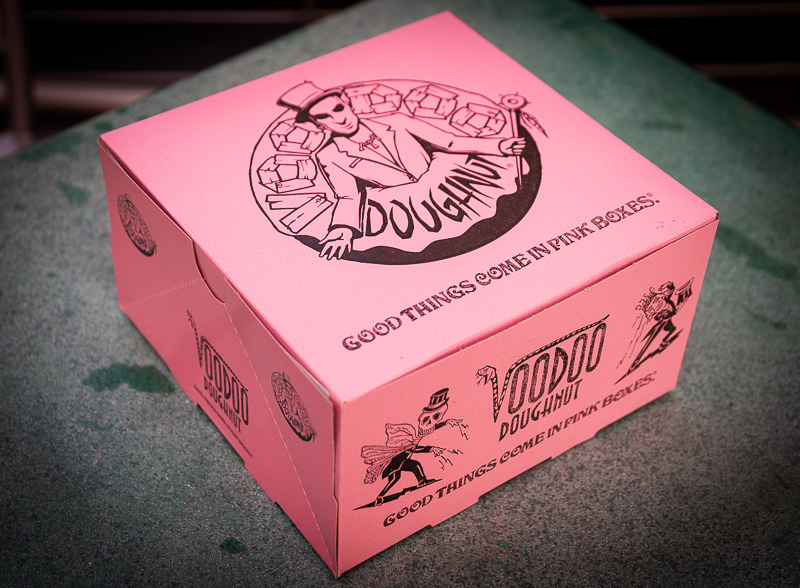 One of the best things about Voodoo Doughnuts is its value for money. The individual doughnuts start at $1.50, which is unheard of for theme park snacks. To be sure, there are pricier options, but you can get a specialty doughnut, like the Voodoo Doll, for under $4.

For families or larger parties, the pre-selected dozen doughnut boxes all offer tremendous value for money, ranging from $16 to $29. Don’t let the prices fool you–some of the best options at Voodoo Doughnuts are relatively inexpensive. 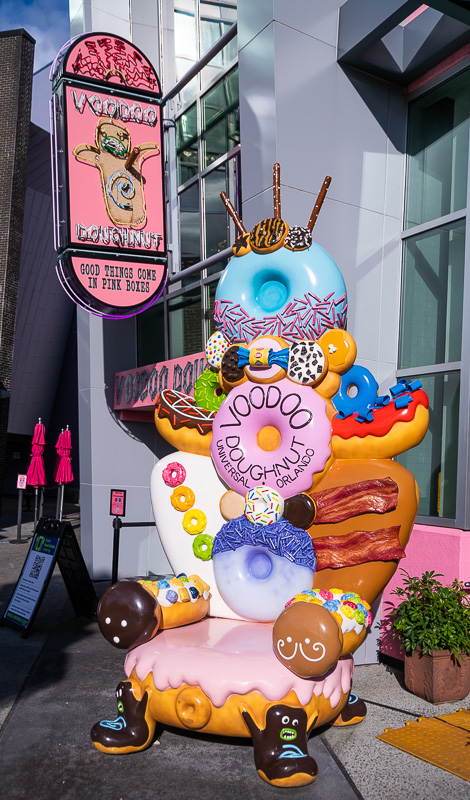 With all of that said, Voodoo Doughnuts is slightly overrated on the fried dough front. A lot of its appeal is gimmicky–the irreverent humor plus the vibrant and eclectic decor. In a theme park setting, it’s hard to fault this–style points matter, and Voodoo Doughnuts delivers in spades on that front. However, the doughnuts themselves are not the end-all, be-all they’re made out to be by some fans.

I’ll also admit that I’m a doughnut snob. It’s a really weird thing to be snobby since doughnuts are not exactly haute cuisine, but Americans do the same thing about pizza and burgers, so it feels right. Living in Southern California exposed us to a lot of good doughnuts and we availed ourselves of that opportunity. 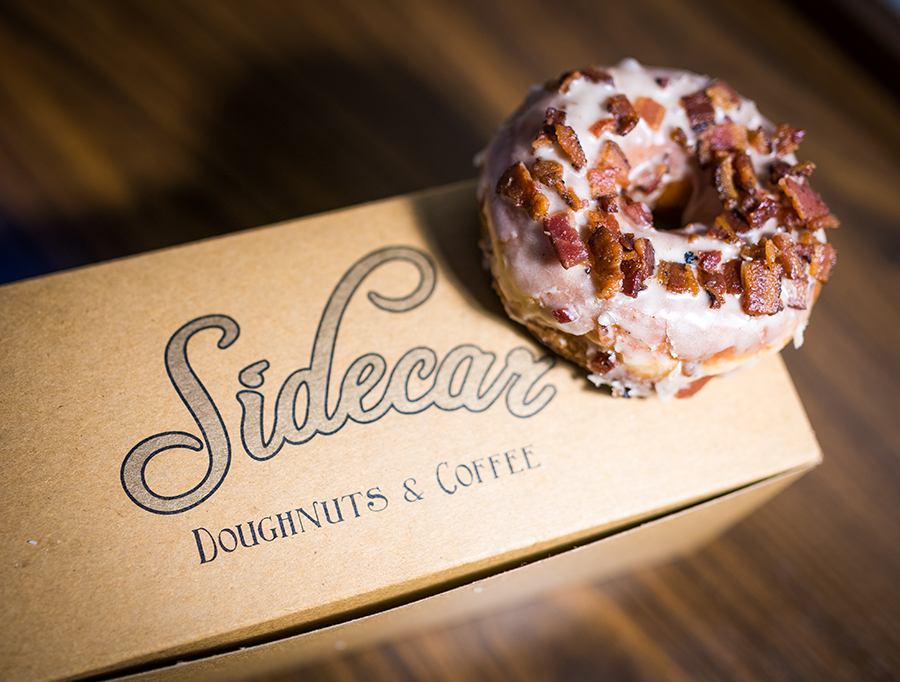 Voodoo Doughnuts also has a location at Universal Studios Hollywood, but in the Los Angeles and Orange County area, it wouldn’t crack a list of the top 10 donut shops. (In fact, it didn’t make Eater’s Top 14 List.) Ranking all of the LA area doughnut shops is well beyond the scope of this post, so I’ll instead just focus on one of particular relevance to those planning Disneyland vacations: Sidecar Doughnuts. 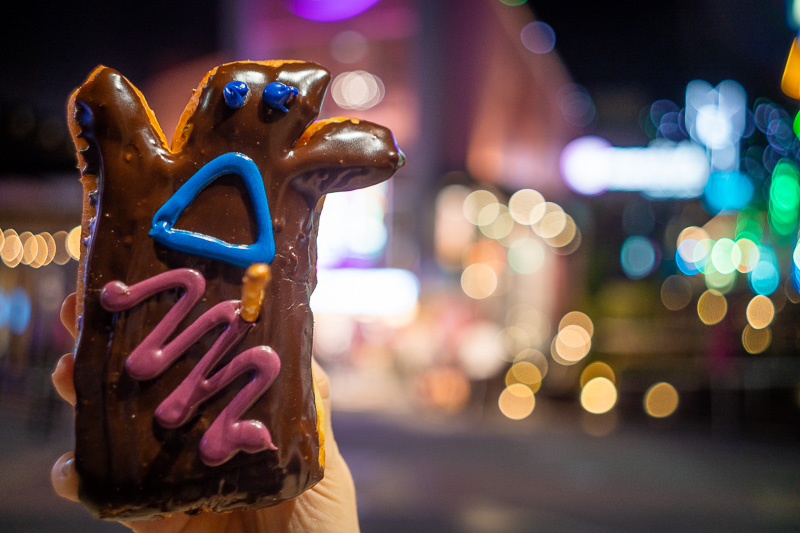 Ultimately, the vast majority of you reading this are going to be using this review to determine whether to try or skip the Orlando outpost of Voodoo Doughnuts, not the California one. In Central Florida, Voodoo Doughnuts ranks as the unequivocal donut king at both Universal Orlando and Walt Disney World. That’s not exactly a high bar with regard to Walt Disney World, as the competition there is pretty much just Joffrey’s, Cronuts at Epcot, and occasional offerings at Main Street Bakery. At Universal, Lard Lad Donuts is actually pretty good.

Nevertheless, the totality of the Voodoo Doughnuts experience is what makes the bakeshop a must-visit. The photo ops, vibrant windows and decorations, unique art pieces, and fever dream design is well worth seeing in person. It’s also worth tasting some of Voodoo Doughnut’s more iconic creations to determine for yourself what lives up to the hype and what doesn’t. Plus, you’re not out too much money if you don’t like any particular snack item, because Voodoo Doughnuts serves up some of the best value theme park desserts you will find in Florida. If that’s not worth a ringing endorsement all by itself, I don’t know what is!

Planning a trip to Orlando, Florida? Learn more about Universal Orlando Resort in our Islands of Adventure & Universal Studios Florida Planning Guide. Want comprehensive Disney advice? The best place to start is our Walt Disney World Trip Planning Guide for everything you need to know.

Have you been to Voodoo Doughnuts in CityWalk at Universal Orlando or Universal Studios Hollywood? What do you think of it? Have any favorite snacks here? Interested in eating here? What do you think of Universal’s v. Disney’s doughnuts? Do you agree or disagree with our dessert spot review? Any questions we can help you answer? Hearing your feedback–even when you disagree with us–is both interesting to us and helpful to other readers, so please share your thoughts below in the comments!