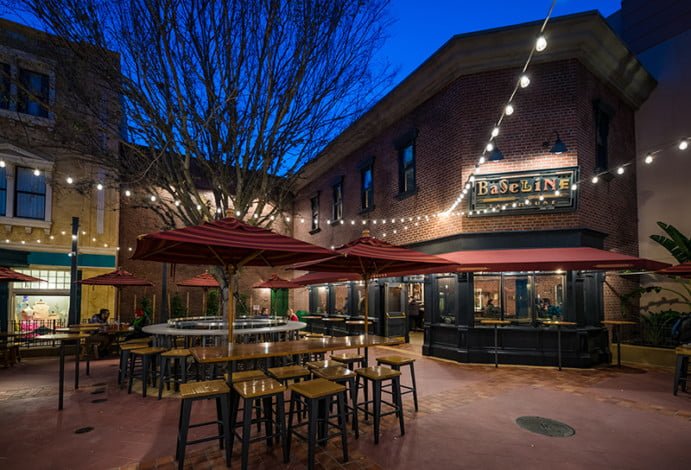 We have plenty of restaurant reviews to share from our recent Walt Disney World trip, but wanted to do a quick “food report” before we post more of those since our dining update from last fall’s WDW trip was reasonably popular. Plus, if I don’t post these food pics here, I’ll probably never post them anywhere, meaning I awkwardly took a bunch of food photos for no reason whatsoever.

As with our last Walt Disney World food report, this will mostly just be quick hits, without in-depth reviews of the restaurants where we ate. In most cases, we’ve already done a full review, so something more comprehensive is superfluous.

We still have a ton of restaurant reviews from the trip to come, including ones from culinary hotspots like Tony’s Town Square. (We’ll also have Teppan Edo, Ale & Compass, plus new reviews for Coral Reef and Sanaa.) Think of this as our newest Walt Disney World trip report, but without anything we did except for the eating…and none of the eating that we’re already covering in other post. In other words, this post is basically just table scraps…

Most of these will be in no particular order, but we’ll start with the first leg of our trip, which we spent at Disney’s Vero Beach Resort… 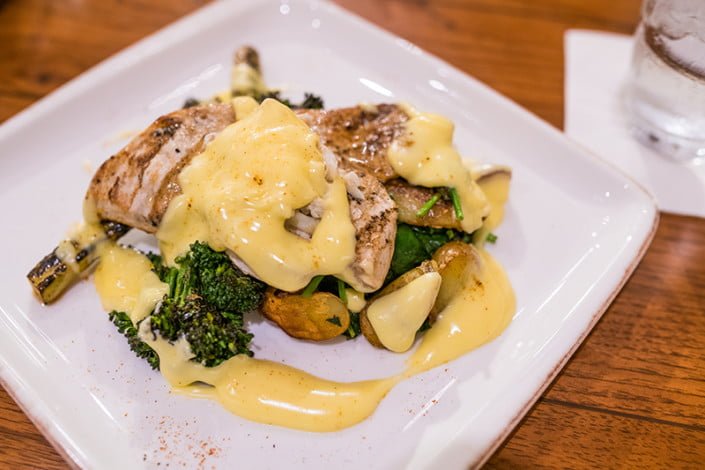 I have every intention of reviewing Wind & Waves Grill, but there’s always the chance that won’t end up happening, so I thought I’d post this here.

We absolutely loved Wind & Waves. The fish was fresh, the service attentive, and the quality was good. Given the location and ‘Disney’ in the name, the restaurant was also fairly-priced. We’d highly recommend it if you go to Vero Beach. 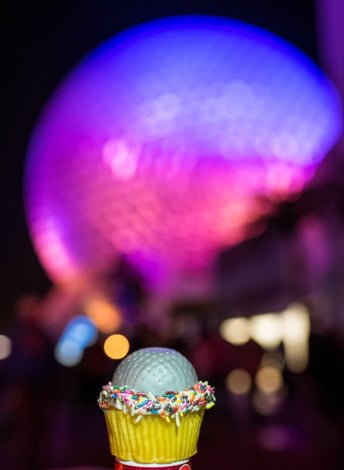 Moving on to Walt Disney World, I’ll start with the coolest thing we had, at least in terms of photos: the Spaceship Earth cupcake from the Fountain View Starbucks at Epcot.

While we normally get weird looks when obsessing over photos of food plated atop trash cans (does no one appreciate art anymore?!), there was a group audibly cheering us on for this photo, eager to see the results when I was done. They were totally sincere, and not at all inebriated. (At least, that’s what I’m going to tell myself.)

As for the cupcake, it was pretty good. We were pleasantly surprised that the exterior was a fondant, and the yellow cake inside was moist, rounded out with a cream filling. 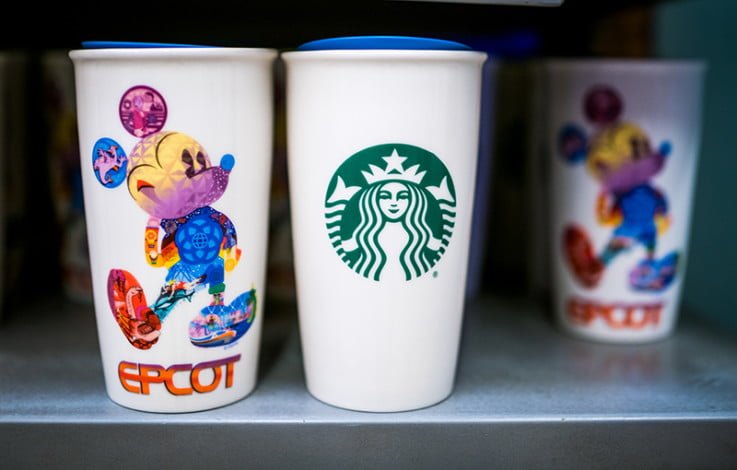 We don’t normally stop at this Starbucks, so I was surprised to see some really cool mugs inside. This is likely old news to hardcore Starbucks mug collectors, but it was new to us. Christmas ones, regular Epcot ones, EPCOT35 ones, etc.

While I really like the design of the mug above, I’m not into the Starbucks co-branding. I have nothing against Starbucks–I like their coffee–I just am good without my stuff being emblazoned with their logo. 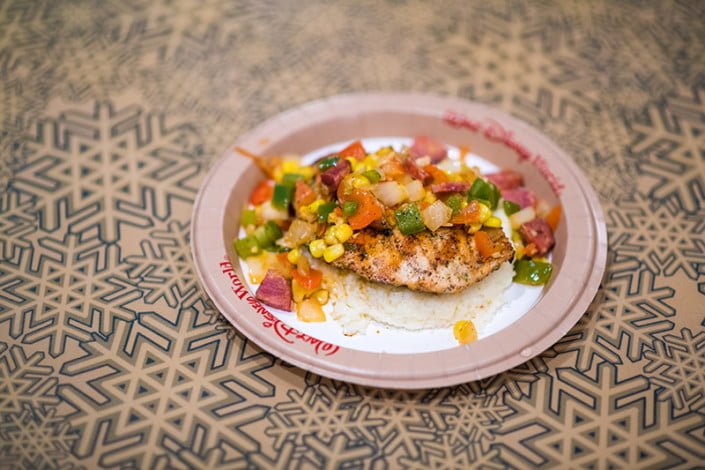 One of the things we ordered at Sunshine Seasons was the Salmon with Cheesy Grits and Andouille-Corn Succotash.

I’ve been looking for a new go-to dish here after tiring of the sandwiches, and I think I’ve finally found it. This was really good. 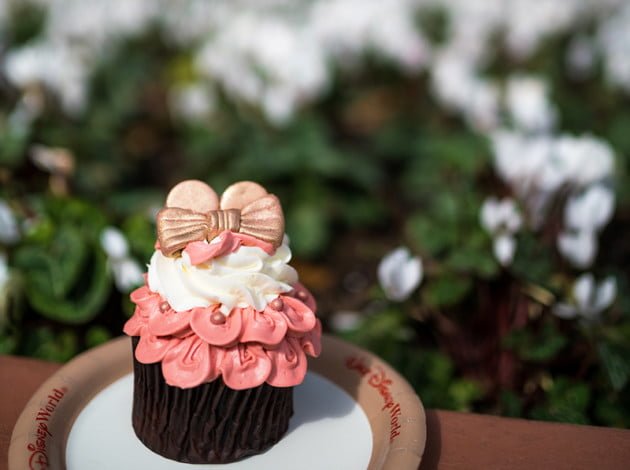 Also at Sunshine Seasons, we got the Rose Gold Cupcake. We actually spotted this the first day it was out, but none of the Cast Members knew how much it cost, and I just assumed it was like $8 since it was pretty lavish.

It didn’t dawn on me that it was a Rose Gold Cupcake, otherwise I would’ve paid any price to be the FIRST to have a trendy Instagram photo of it. Just think of all the Likes–the strongest currency of all–that photo would’ve gotten! 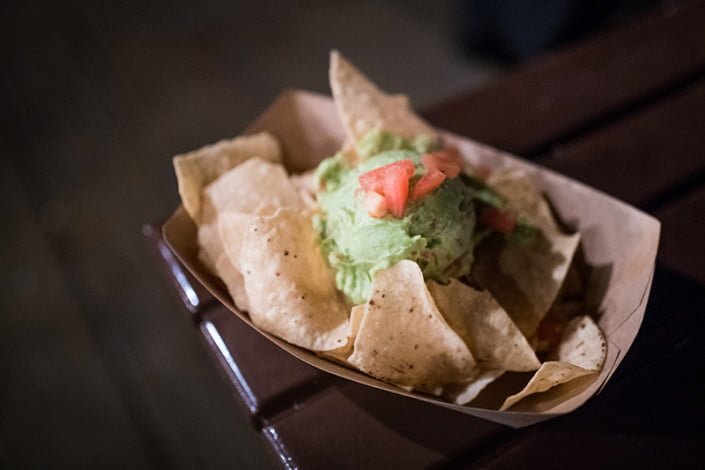 One night we were getting really hungry at Epcot, but wanted to hold off on having dinner until Disney Springs, so we ordered the cheapest thing we could find, which happened to be the Guacamole at La Cantina de San Angel.

It wasn’t half bad. It didn’t seem like guacamole loaded with fake ingredients or mass produced, but given the low price, it probably was. Either way, I’d get it again. 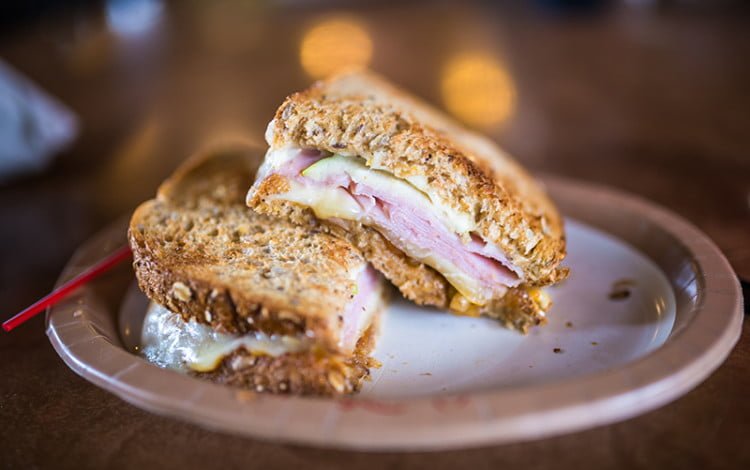 At Kringla Bakeri og Kafe in Norway at Epcot, we had the Ham and Apple Sandwich one day. It had robust flavor and nice texture. It also felt like a responsible, healthy thing to eat, what with the multi-grain bread and all.

I wanted to get the School Bread, but we “had” to order a bunch of snacks from Festival of the Arts kiosks in order to review those. The sacrifices we make. 😉 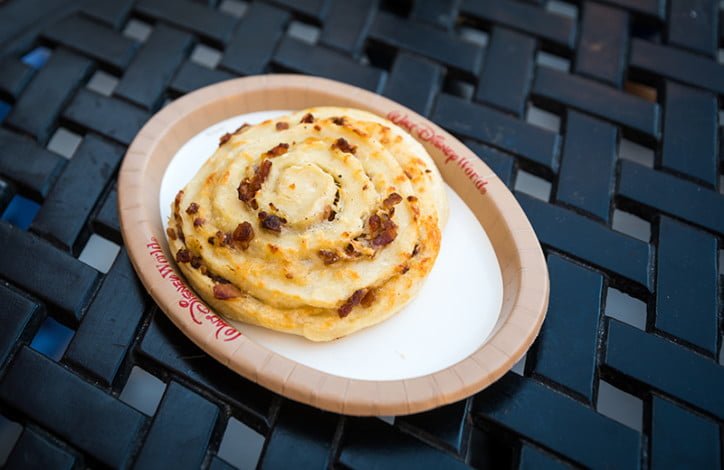 On another occasion, we were really hungry and had 10 minutes until the next showing of Impressions de France, so we raced over to Les Halles for the Roule Lard et Fromage (Bacon and Cheese Roll) and Croissant Jambon Fromage. We were in such a rush, my photo of the latter didn’t turn out.

The newish bacon and cheese roll was fantastic. You can’t go wrong with anything that has bacon and cheese, but mix that with a savory pastry and you’ve got a real winner. 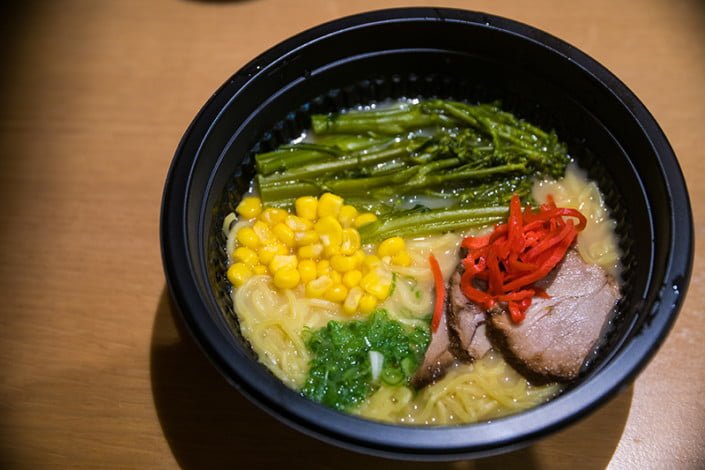 We also dined at Katsura Grill at Epcot, which is one of our favorite counter service spots in the park.

I had the Tonkotsu Ramen, and it was decidedly bad. In fairness, Sarah and I just ate ramen almost every single day for two months, but I don’t think familiarity has bred contempt. I still love ramen, this just wasn’t very good. It was more akin to something you’d make in college than something a Japanese restaurant would prepare. Everything else we had at Katsura Grill was very good, as always. 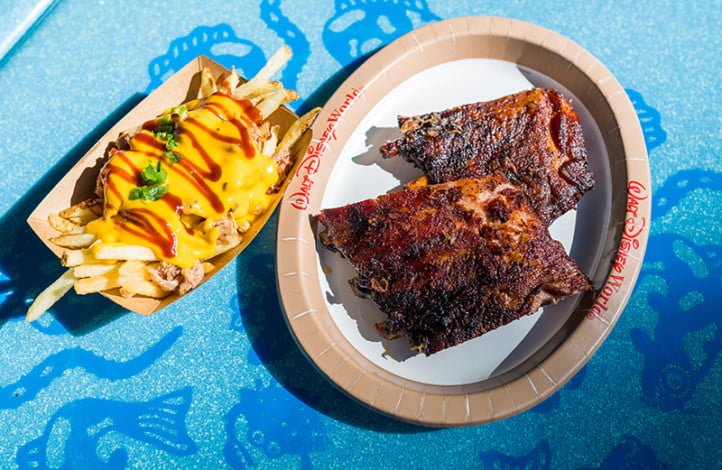 Moving on to Animal Kingdom, I ate by myself at Flame Tree BBQ. I was outvoted by our group, but rather than conceding defeat, I went here while they all went to Satu’li Canteen.

I wanted to get the ribs and the newish French Fries with Pulled Pork and Cheese, but without spending $25 (no joke, that’s what the entree plus the side would’ve cost). You can’t do the full rack entree-only for some reason, but I was able to buy the half rack. It still came out to ~$20, which was way too much, but the fries were good. The ribs were not the best I’ve had at Flame Tree BBQ. Ultimately, I wished I had just gone to Satu’li Canteen with everyone else. 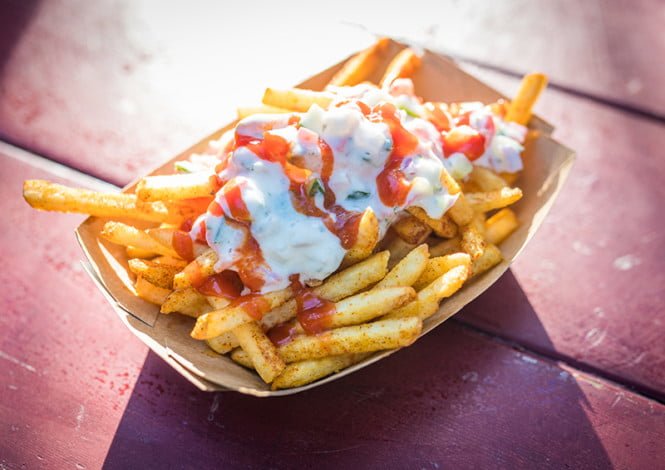 Later in the day, I continued my grand tour of Animal Kingdom’s loaded fries with Mr. Kamal’s Seasoned Fries topped with Tzatziki Salad and Sriracha Ketchup.

These were shocking good–better than the Flame Tree BBQ fries (which I also liked). They had a nice ‘hot and cool’ dichotomy and the seasoned fries themselves had good flavor and a nice crunch. I’d seek these out again if we’re in Animal Kingdom and I want a snack. 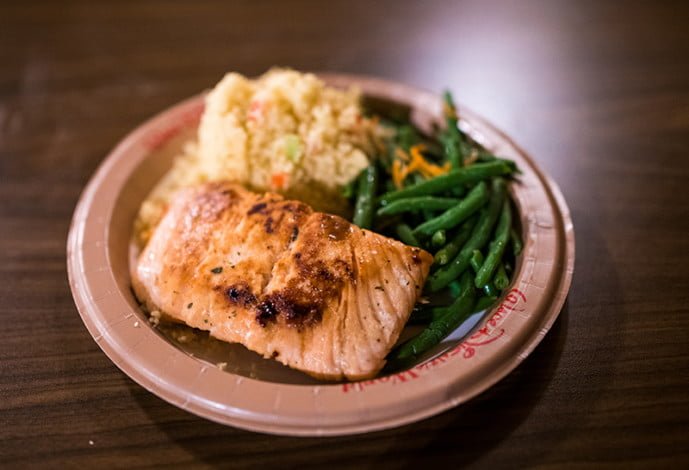 At Columbia Harbour House, Sarah had the Grilled Salmon.

I believe we’ve mentioned this on the blog a time or two, but we should reiterate that this is one of the better healthy counter service entrees in Magic Kingdom. The salmon can be overcooked and dry on occasion, but we seem to have success with it about 75% of the time, which is about all you can expect for any ambitious item at Walt Disney World counter service restaurants. 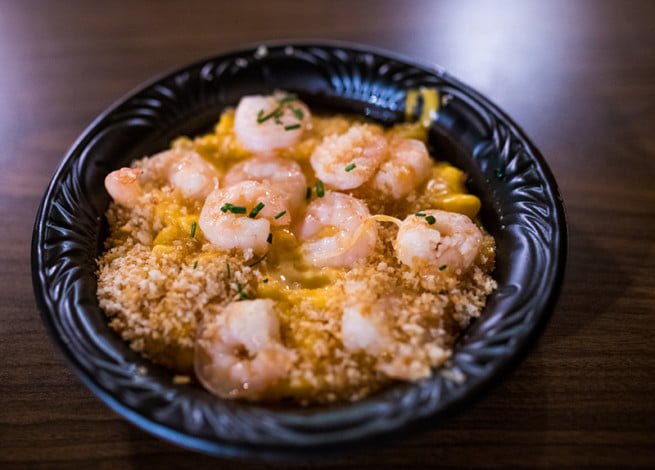 I had the Shrimp Macaroni & Cheese.

This was basically the opposite of Sarah’s meal: unhealthy and a fairly low-quality dish all around. I don’t think the texture of shrimp works in mac & cheese, but the bread crumbles helped conceal that to an extent. Nonetheless, I enjoyed it. Sometimes you have to embrace simple comfort foods and the guilty pleasures. That’s what I’d consider this. 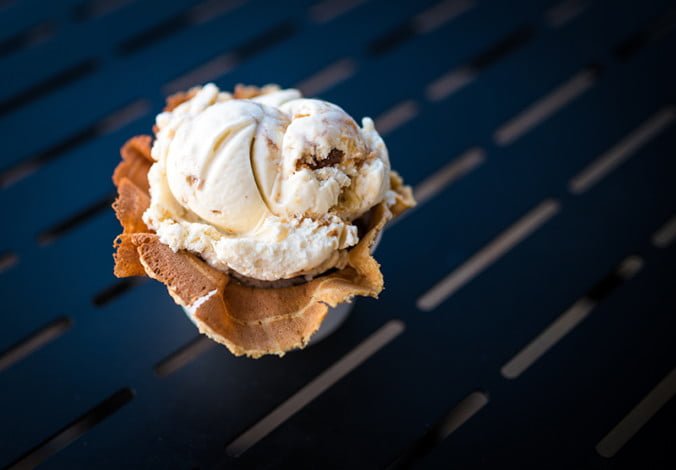 You’ll never believe where we had ice cream…

(Spoiler: it’s the place where we now always have ice cream. Perhaps the bigger surprise is that we only stopped at Ample Hills once this trip!) 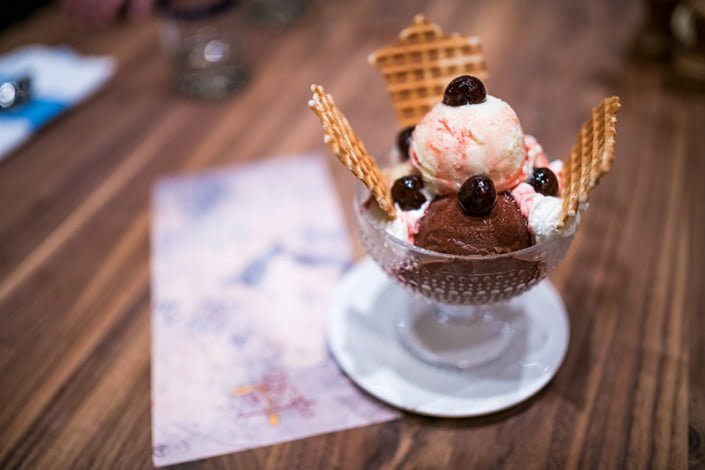 We also had the Amarena Gelati Sundae at Enzo’s Hideaway, which consists of crema, chocolate, pistachio, cherries, and whipped cream.

I’m not ready to write a full review of Enzo’s Hideaway yet (we need to do another meal there first), but I just couldn’t resist sharing this. It was fantastic. The gelato was rich, flavorful, and dense, the crema and cherries played wonderfully together, and the mix of flavors was surprisingly good. I think it’s worth stopping at Enzo’s Hideaway for drinks (at least) to check the place out, and if you do, order this sundae, too. 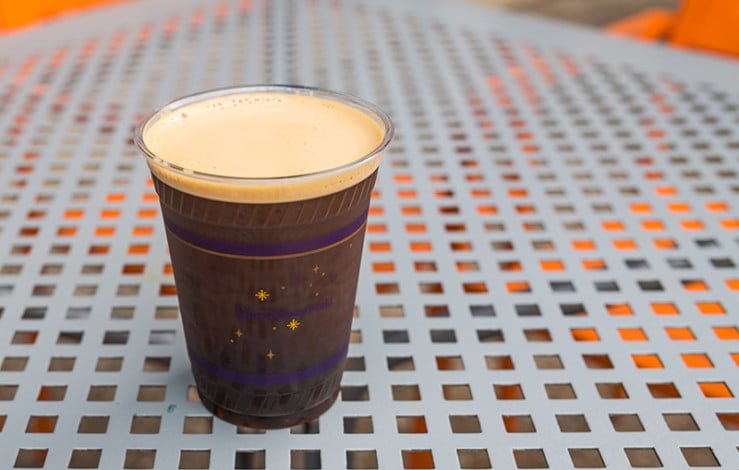 The first time they handed it to her, it had no head at all, and tasted flat. The second time was “better,” but it was still basically the Budweiser of coffee. She was too repulsed to drink it, so she handed it to me after two sips. I wasn’t about to waste a strong dose of caffeine, so I chugged the rest to avoid having to taste it. The experience made me feel like being back in a college frat house…except old. 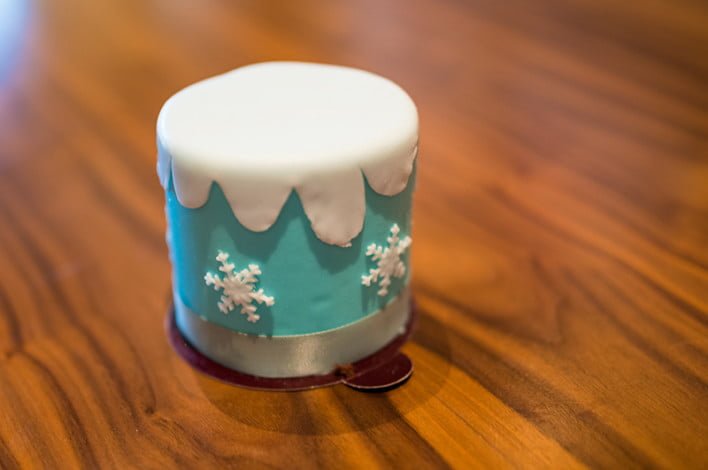 On a more upbeat note, we made a couple of stops at Amorette’s.

One of our purchases was this delicious, seasonal mini-cake. These cakes are a bit pricey, but they’re enough for 2-3 people (…writes the person who ate this one by himself). I think the value isn’t half bad considering the size and exceptional quality. 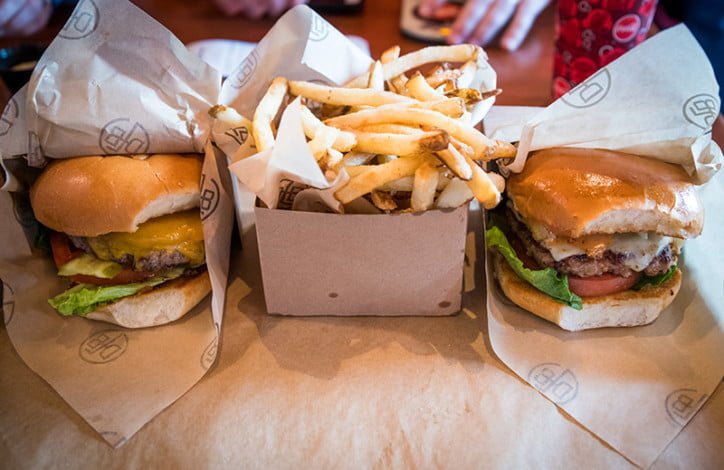 Speaking of value, we ordered the Ultimate Duo at D-Luxe Burger and upgraded to a large order for fries. Two premium burgers, two drinks, and large fries for ~$30. One of the chief complaints about D-Luxe Burger has been pricing, and I’d say these duos are an excellent answer to that. We spent more on far worse (and less filling) counter service meals this trip.

As always, our meal at D-Luxe Burger was exceptional. The burgers are among the best at Walt Disney World, and those dipping sauces for the fries are addictively good!

Okay, that’s it for our ‘random meals’ during our recent visit to Walt Disney World. Aside from the items featured here, we either focused on Epcot’s International Festival of the Arts or places that are new-to-us. As noted above, we’ll have those reviews in the coming weeks. In the meantime, hope you enjoyed these random food photos and thoughts!

Do you agree or disagree with our ‘reviews’ of any of the foods we tried on our first 2018 trip to Walt Disney World? Thoughts on any of these restaurants? Any questions we can help you answer? Hearing feedback about your experiences is both interesting to us and helpful to other readers, so please share your thoughts below in the comments!