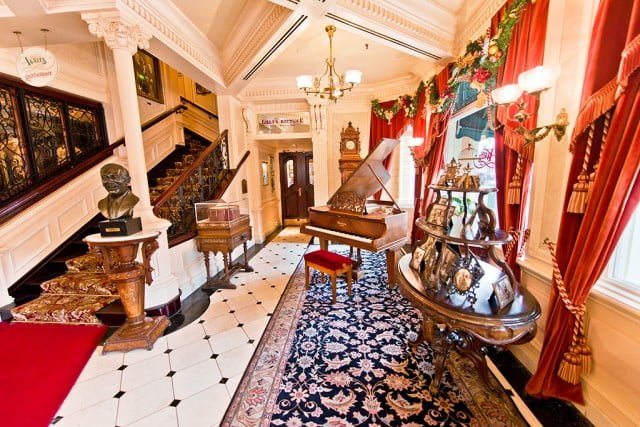 This blog doesn’t exactly shower restaurants at Disneyland Paris with praise. Positives–any positives–about the dining scene in France’s Disney parks are few and far between, but here’s a big one: Walt’s – An American Restaurant is better than Club 33.

That’s right. I would rather dine at the general public restaurant on Main Street at Disneyland Paris that pays tribute to the park’s lands and life of Walt Disney than I would the posh and private eatery above the plebs in New Orleans Square. This is true even if money were no issue, and is not hyperbole. Even though the cuisine is exceptional at Club 33, I think Walt’s is the better themed experience.

Now, before you go dismissing this as sour grapes or me wanting to reassure myself that I’m not missing out on an exclusive experience that I can’t have anyway, we’ve been to Club 33 several times. I have zero desire to return. In fact, there are a few restaurants that offer roughly comparable experiences to Club 33 that are superior to Disneyland’s private membership club.

While all of those might be interesting comparisons to the original Club 33, the most fascinating is Walt’s – An American Restaurant because it’s the most analogous. 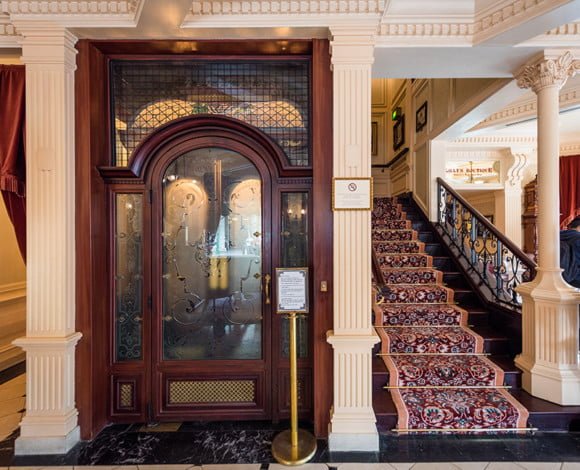 Walt’s style and theme are quite similar to what Club 33 used to be, and in fact, former Imagineer Eddie Sotto even stated that the thinking when designing Walt’s was, “why can’t people who don’t have a membership get the experience like Club 33?”

Even if the two restaurants are radically different today, the shared lineage raises an interesting question: in a Disney setting, is the luxury-first approach of present-day Club 33 better, or is the theme-first style of Walt’s and OG Club 33? In this post, I’ll share photos from Walt’s to make my case (even though they don’t really do it justice), plus my thoughts on both restaurants.

Note that this comparison focuses solely on theme and design, which I believe are the defining characteristics of Disney restaurants (great meals can be found in abundance among real world restaurants; usually better and at lower price points). If we were discussing food, Club 33 trounces Walt’s, and that’s even taking into account the dramatically-improved new menu at Walt’s, which is quite good. 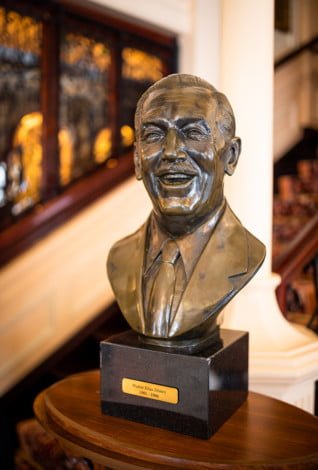 As background, I did not exactly having glowing things to say about the remodeled Club 33. In our New-Look Club 33 Photo Tour & Review post, I described it as “Art Nouveau Riche” and lamented the design that featured excessive ornamentation for its own sake, as if to flaunt its own fanciness and say, “look at me…I’m expensive design!”

My opinion of Disneyland’s Club 33 has not changed since. The design is not well-appointed, it’s every bit as tacky as a designer handbag with a logo pattern. (Okay, maybe not that bad.) Club 33 has a McMansion aesthetic, trading in character and rich design for the pretense of wealth and faux luxury. 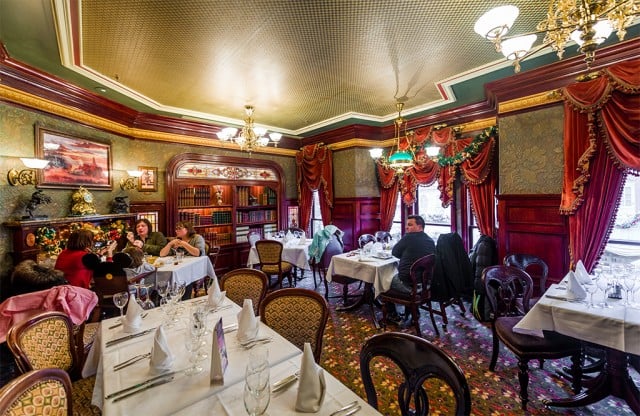 It might seem excessive, but the McMansion comparison is apt, and I’ll take that one step further with an analogy: Walt’s is to Club 33 what Palm Springs is to Calabasas. Walt’s is elegant and well-appointed, and the interior design was carried out in a thoughtful manner.

With every detail and flourish at Walt’s, there’s the sense of a greater purpose. An effort to tell a story, evoke the atmosphere of a particular land, or make homage to aspects of Walt Disney’s life. Like a complex dish, disparate ingredients are carefully presented in such a deft way that they meld beautifully, and create something that is more than the sum of its parts. Something perfect. 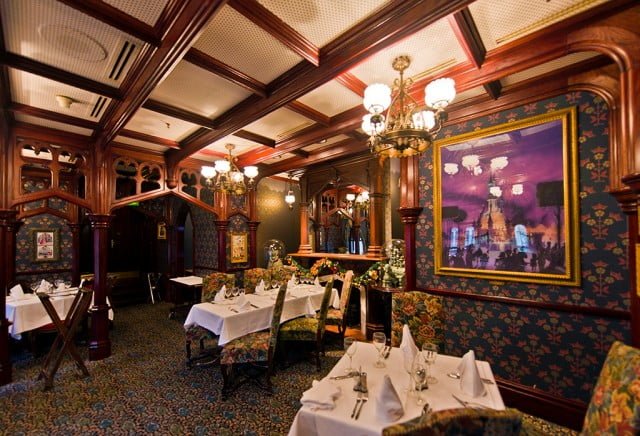 For me, this is the magic of Walt’s – An American Restaurant. As an abstraction, “fine dining themed to pay tribute to the life and work of Walt Disney” sounds like a really tough concept to pull off.

It’s not that the paying tribute to Walt Disney is somehow at odds with a fine dining restaurant, it’s that accomplishing both simultaneously is a tall order. 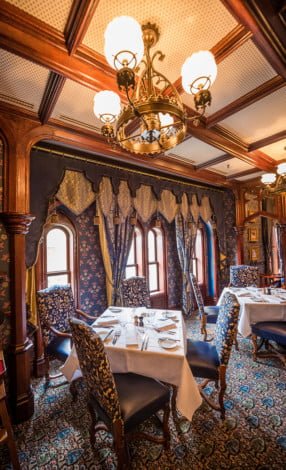 However, the Imagineers responsible for Walt’s nailed the design. Ornate woodwork, draperies, carpet, light fixtures, wallpaper, and so on, all was chosen with purpose in Walt’s.

Even though none of these things explicitly reference the theme, the choices in each dining room are unique and do an excellent job of reinforcing it. 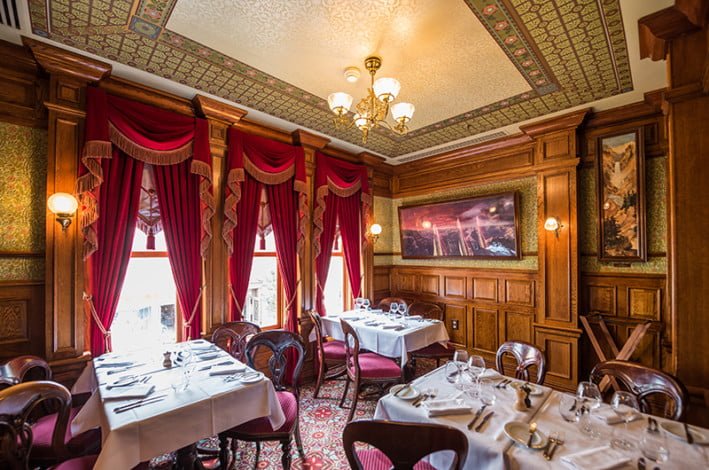 It’s remarkable how minute details implicitly work to evoke certain thematic motifs, which in turn provide to guests a sense of the old west, fantasy, adventure, discovery, and so on.

It’s also impressive how, much like in the park itself, these very different themes work together. It’s not just that they don’t clash, which alone is impressive, the restaurant actually has a cohesive design! 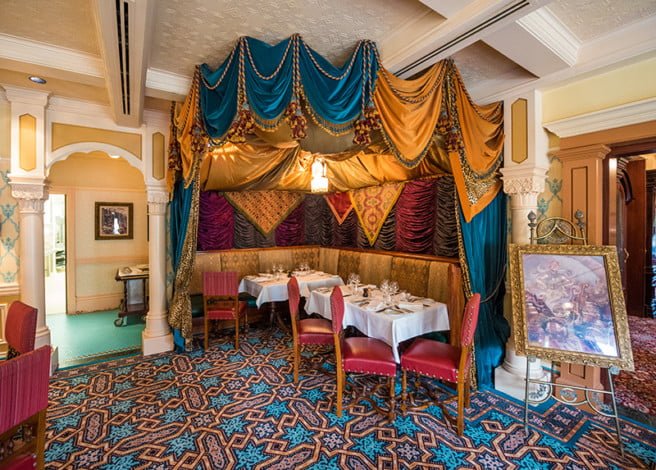 Contrast this with the design for the new-look Club 33, where it sure seems that the tail wagged the dog. A large chunk of its Walt-centric history was gutted, and replaced with generic high-end finishings.

The goal was not a rich restaurant, but a fancy one. Most style choices appear to be predicated on a conspicuous display of wealth. The new design is superficial and gaudy. There’s no there there. 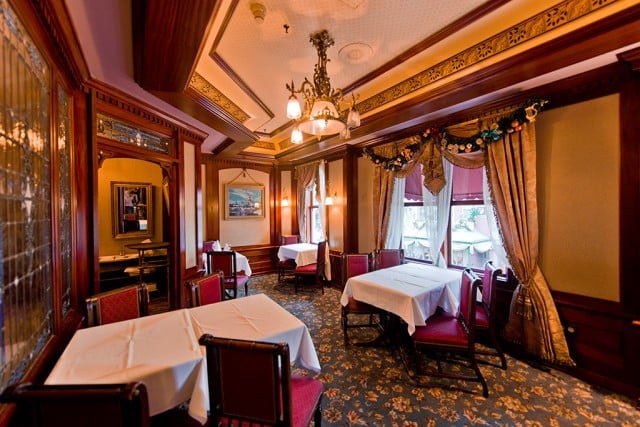 In a nutshell, that’s ultimately what separates Walt’s – An American Restaurant from present-day Club 33. The latter is fancy and luxurious, no doubt, but an argument could also be made that Cheesecake Factory is ‘fancy.’ (Too far?)

Likewise, Walt’s – An American Restaurant is luxurious…but it’s also richly detailed, thematically deep, and skillfully designed. It doesn’t rely upon a bunch of overt signifiers that its fancy, because its elegance speaks for itself. 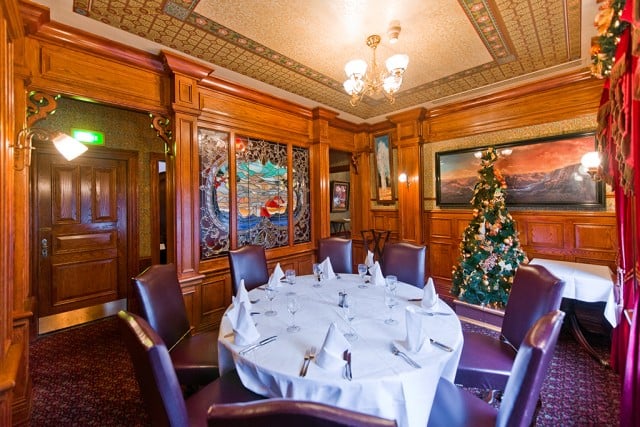 So there you have it…if you’ve been itching to drop tens of thousands of dollars in initiation fees, plus thousands more each year, for the experience of Club 33, instead drop a couple thousand on airfare to Paris and a meal at Walt’s – An American Restaurant. So long as you aren’t preoccupied with exclusivity, the latter is the better and cheaper option…and you’ll get to see France!

If you’ve been to Walt’s or the new-look Club 33, what did you think of them? If you’ve been to both, do you agree or disagree with our assessment? Any questions? Hearing feedback about your experiences is both interesting to us and helpful to other readers, so please share your thoughts or questions below in the comments!